The builder of skyscrapers with whom you can get along

14 May 2018
8
US President Donald Trump will remain so kind to the world and Russia that, unwillingly, tore the mask of democracy from the face of real power in the United States. How to call this secret American power: a deep state, a conglomerate of media financiers and special services, according to Oleg Deripaska, or the Washington swamp, is not important, although it is clear that the special services are in any case its most important part. 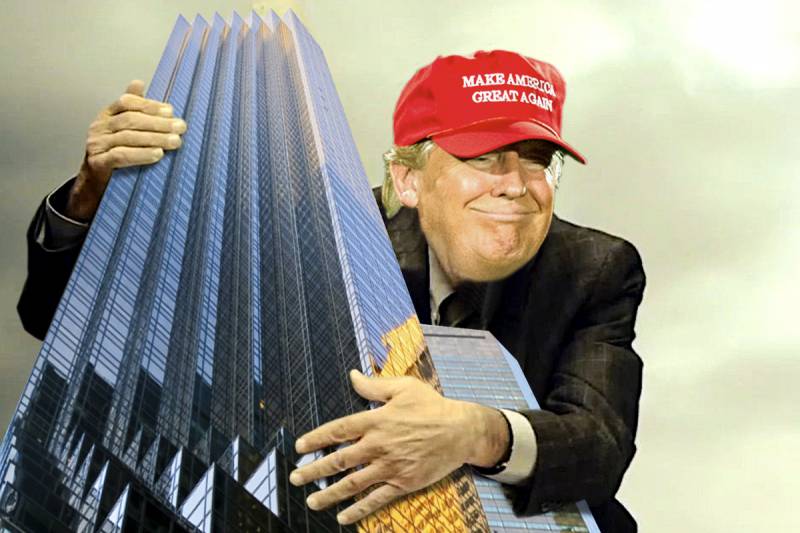 This has been talked about before, but now the world has vividly shown that American democracy is not at all white and fluffy, for what it claims to be with the help of world fake news. By the way, the term “fake news” has also introduced Trump to the world turnover, for which a special thanks to him.

During his election campaign, Trump did not use the word "democracy", which defiantly contrasted against the background of the glorifying democracy Hillary Clinton, Barack Obama and the "Washington swamp", which the observers paid attention to. What is “Western democracy”, and is it at all, or is this the western edition of communism according to A.A. Zinoviev and the “power of demagogues”, according to the ancient Greek philosopher Plato, can be argued, but Donald Trump, with his disregard of “democracy”, put the question of modern democracy on the agenda.

The world fake news is now trying to blab or shut up the election scandals of “American democracy”, replacing them with fake scandals about “Russian interference” in elections and “Trump's conspiracy with the Russians”, as they began to silence exposing ex-CIA officer Edward Snowden about that the Western world is turning into an electronic camp under the hood of the American special services.

Trump's phenomenon and Snowden's revelations suggest that behind the lies about the “values ​​of democracy and freedom” in the West, there is still a demagogic inherent despotism about which Emanuel Kant warned. Apparently, it is not by chance that Western democracy gave birth to Adolf Hitler, and today she is bearing again in the depths of the “controlled chaos” of the next great demagogue?

It seems that the American neocon democracy-demagoguery stands on two pillars: the fake news and the neo-colonial democratic system, also called the partner countries of America. Having thrown herself on world domination, she lost her “native shores”, so much so that she began to devastate America itself, as in its time communism devastated central Russia. This gave rise to the phenomenon of Donald Trump: he did not accidentally win the presidential election with the slogan: “Let's make America great again!”

Therefore, Trump does not use a dictionary of fake democracy and denounces fake news, so the pillars of democracy and fake media are trying to remove Trump from power with the help of the “Russian scandal” and are trying to control America’s foreign policy from behind Congress.

However, behind the universal cry of the world's demagogues about the destruction of the "values ​​of democracy" is not only the coming of Trump, but also the destruction, and more correctly, the self-destruction of the unipolar American dollar world, the neocon democratic colonial system. And America has created its own Chinese economic undertaker with its own hands, transferring industrial production to China. So neocon democracy, long before the current "crisis of democracy", set foot on the path of its collapse.

New nuclear doctrine permitting limited US use of nuclear weaponsTrump and his national-minded like-minded people, in fact, are trying to return to the “nuclear cannoners policy”, in other words, to the direct colonial system by coercing each country’s “partnership”. They were going to start with North Korea, today they are switching to Iran, denouncing a nuclear treaty with it, tomorrow it could be any other country. But with such a strategy, Trump finishes the universal democratic colonial system of the neocons, with all its transatlantic and trans-Pacific communities.

After congratulations by President Trump to Vladimir Putin on his victory in the elections, the American press attacked him, moreover, so that Trump exploded: “The fake media went wild. Getting on with Russia is good, not bad. ” Despite the endless accusations "in collusion with Russia," Trump does not go on a personal confrontation with Putin's Russia. Why? Russia is the only country against which the “strategy of nuclear gunboats” is useless, so Trump needs at least the neutrality of Russia so that he can force other countries to “partner”. Another important reason: to try to weaken relations between Russia and China.

Neocon democrats, their fake news from such a Trump policy infuriate because it leads to a split in the core of “world democracy” - the collective West. European countries are afraid of separate partnerships with America, are afraid of the resumption of the "gunboat policy", and refuse to support the Iranian policy of Trump.

The madness of the neocons makes sense. “If you want war, you need to bring the country to hell”, - one American senator spoke somehow democratic wisdom, this covenant is now embodied in America by neocons, starting with Senator John McCain and ending with Special Prosecutor Robert Muller. This madness is the last word of American democracy-demagogy, and the path to the overt world dictatorship, which replaces democracy, which Emanuel Kant spoke about, and which philosopher A.A. Zinoviev predicted in his writings.

Donald Trump wants to make America “great again,” but how his “gunboat politics” will end is a big question. Trump is also known as a builder of skyscrapers, so he knows how difficult it is to build them and how easy it is to destroy. Today, President Trump is making the US power open again, taking it out of the Washington neocon corridors, and thus, there is a subject with which Russia and the world can speak on the merits. Compared with the times of the anonymous government of the demagogues of the “deep state” under Barack Obama and the possible presidency of Hillary Clinton, this gives some hope for a better future.

Ctrl Enter
Noticed oshЫbku Highlight text and press. Ctrl + Enter
We are
A great interview with Sergey Lavrov: about Ukraine, Obama and IranWhat you didn't want to know about England
Military Reviewin Yandex News
Military Reviewin Google News
8 comments
Information
Dear reader, to leave comments on the publication, you must sign in.