13 May 2018
38
Sakhalin Island off the east coast of Asia is a distant corner of Russia. It is the largest island of Russia, washed by the Sea of ​​Okhotsk and the Sea of ​​Japan. The name “Sakhalin” comes from the Manchurian name of the Amur River - “Sakhalyan-Ulla”, which means “Rocks of the Black River”.


The public sounded the alarm when the growth of oncological diseases became noticeable among the population of the Sakhalin region. According to the Ministry of Health of the Sakhalin region, mortality from neoplasms (including malignant tumors) on 100 000 population in 2016 was 241 people, which is higher than the previous year by 5,6% and higher than the average for the Russian Federation by 19,7%. 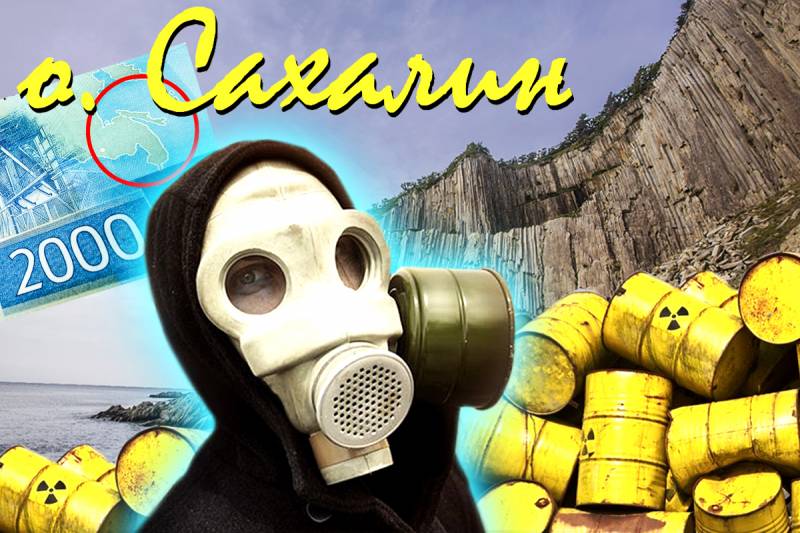 If 1 Ki (Curie) strontium enters the human body (for example, with infected fish), it can lead to very serious consequences: cancer of the stomach, blood, and bone marrow.

Sakhalin public man, former director of Sakhalin-Geoinform, Vyacheslav Fedorchenko, referring to the official documents of the Main Directorate of Navigation and Oceanography of the Russian Defense Ministry, told deputies of the Sakhalin Regional Duma that by the 1996 year in the Sea of ​​Okhotsk Navy 39 of the RTGs were flooded (near lighthouses and in the base area Navy hydrographic detachments). Until 1998, there was no regulatory document that would oblige them to hand over radioisotope generators for disposal. “Being in an aggressive marine environment, products like RTGs are self-destructed. Thus, a sharp increase in cancer in the DFO may be a result of the authorized disposal of RTGs by flooding,” he believes. 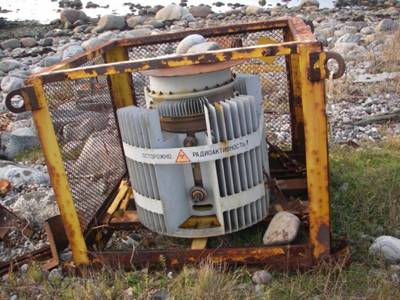 RTG (radioisotope thermoelectric generator) - a radioisotope source of electricity using thermal energy of radioactive decay. It was intended to power unattended, automatically operating means of navigation equipment - light beacons, radio beacons, illuminated navigational signs, radar beacons-responders located in remote areas of the coast. Where the use of other power sources is difficult or almost impossible.

Compared to nuclear reactors using a chain reaction, RTGs are much smaller and structurally simpler. The output power of the RTG is small (up to several hundred watts) with a small efficiency. But in them there are no moving parts, and they do not require maintenance throughout the entire service life, which can be calculated for decades.

By the way, by no means should an 500 get closer to it when a RTG is detected! It was in the Murmansk region a few years ago. The thieves who had access to the storage place of the RTGs dismantled several generators. All parts, including depleted uranium protection, were stolen. Criminals have not been found. Scientists have suggested that they are guaranteed not to be alive, since they received a lethal dose of radiation.

According to V. Fedorchenko, a satellite equipped with a nuclear power plant (unsuccessful launch in 1993 from Baikonur) and a Tu-95 strategic bomber with two nuclear bombs crashed in 1976 in the Terpenenia Bay also flooded near Sakhalin.

"Even now, virtually every fish caught has radioisotope contamination with strontium-90 and cesium-133, which tend to accumulate in the human body. There is a law on environmental protection that prohibits the dumping of radioactive waste into the sea, where flooded RTGs are classified as Class I danger. Therefore, RTGs must be found and properly buried. That’s the law. Everything else is demagogy, "said V. Fedorchenko. He added that otherwise flooded installations would be a danger for another 600-800 years.

Today, according to Vyacheslav Fedorchenko, many departments have space images of the flooded Tu-95 strategic bomber with atomic bombs on board. This documentary evidence appeared thanks to such a method as remote sensing of the Earth. With this method, you can detect all submerged radioactive ships, submarines and aircraft. There are exact coordinates of a spacecraft with a nuclear power plant in Aniva Bay. The location of 5 from 38 of submerged nuclear-waste ships in the Patience Bay is known. The Federal Service for Ecological, Technological and Atomic Supervision, by its letter No.N-48 / 23, confirmed the flooding of nuclear facilities in certain areas of the Pacific Ocean. 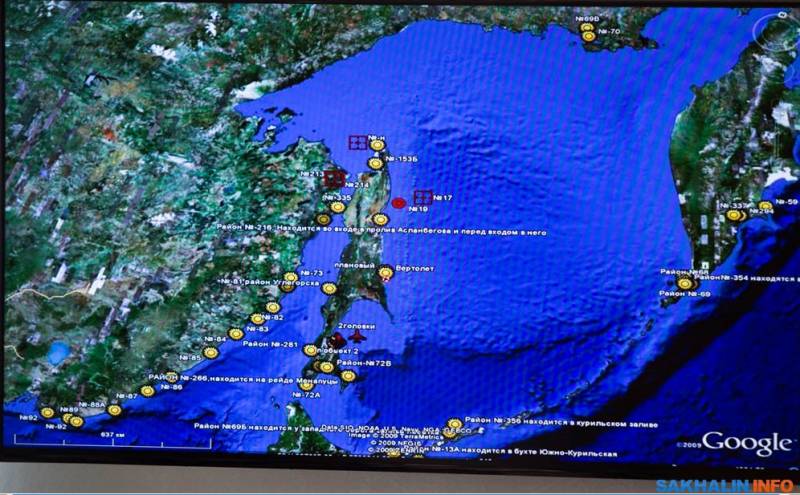 The head of the hydrographic service of the Pacific Fleet, Gennady Nepomiluyev, told the deputies of the Sakhalin Oblast Duma that the Pacific Fleet (Pacific Fleet) in 2018 would continue the search for a radioisotope thermoelectric generator (RTG) submerged in the Sea of ​​Okhotsk.

He said that in the 1970-1990-ies, the Pacific Fleet balance contained 148 RTGs. Of these, 147 is currently decommissioned and transferred for temporary storage to the Far Eastern Center for Radioactive Waste Management. For all installations, the Pacific Fleet has documents, where they are today and when they were disposed of.

One RTG in 1987, when delivered by helicopter to the lighthouse, the Pacific Fleet was accidentally dumped into the sea near Cape Low due to adverse weather conditions and the risk of a helicopter falling. Coordinates of flooding - unknown. The search for the generator has been going on all these years, but there were no results. From 2012, the Pacific Fleet annually conducts monitoring in the area of ​​Cape Low - a diving survey, echolocation, measurement of radiation levels, sampling of soil and water. G. Nepomiluev emphasizes that this area is closed for fishing and other production activities until an RTG is found.

The Sakhalin Regional Duma sent appeals to Rosatom and the Ministry of Defense of the Russian Federation on this information of public figures but these agencies did not confirm the flooding of 39 RTGs, bomber and space satellite. Nevertheless, the population of the region is concerned about the growth of cancer, and the reason for this trend is still unknown.

It seems that the situation in the Sea of ​​Okhotsk is hushed up by those who are not interested in disclosing this information. During the collapse of the army and fleet after the 90s, shaped anarchy was going on in the country, so it is not surprising that underwater radioactive burials appeared. To hide the ends in water is just the right expression. But this problem must be solved!

Deputies of the Sakhalin Regional Duma at a meeting of the regional parliament 3 in May 2018, adopted the text of the appeal to Prime Minister Dmitry Medvedev and Minister of Defense Sergey Shoigu. Both appeals concern one topic - to consider the issue of ensuring the radioecological safety of the Far Eastern seas and the need to lift potentially dangerous objects from the seabed. It remains to wait for decision-making at the highest level.

In October 2017, a meeting of the working group "Ensuring environmental safety and rational use of natural resources" was held in Moscow as part of the state commission on the development of the Arctic chaired by the Minister of Natural Resources and Environment of the Russian Federation S.Е. Donskoy. It was dedicated to the state of facilities with radioactive waste (RW), spent nuclear fuel (SNF) flooded in the Arctic seas, and possible options for financing their recovery. At the meeting it was announced that 17 000 containers and 19 vessels with radioactive waste, 14 nuclear reactors, five of which contain SNF, 735 units of radioactive structures are flooded in the Arctic seas. 2 nuclear submarines, one of which with unloaded SNF, are also flooded there..

Ctrl Enter
Noticed oshЫbku Highlight text and press. Ctrl + Enter
We are
A great interview with Sergey Lavrov: about Ukraine, Obama and IranWhat you didn't want to know about England
Military Reviewin Yandex News
Military Reviewin Google News
38 comments
Information
Dear reader, to leave comments on the publication, you must sign in.