How to betray your own people and spit on its history

13 May 2018
86
By their attempts to put an equal sign between Hitler Germany and the Soviet Union, the Kiev regime and its Western patrons actually side with the Third Reich with its policy of mass extermination of European Jews. 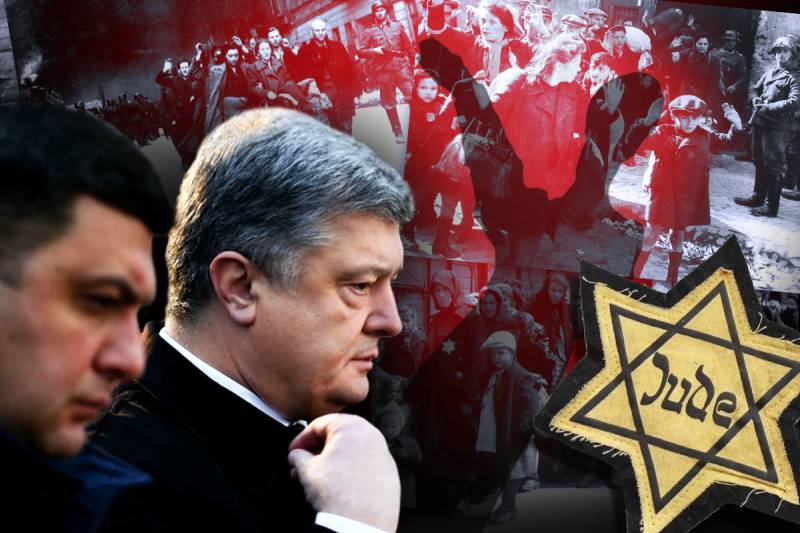 As is known, the current writers of the "alternative stories"From the city of Kiev is literally bursting with pride for his own" invention "- about the equal responsibility of Hitler and Stalin for the Second World War. Say, both tyrants secretly conspired, attacked Poland, and then went and went.

However, in this pseudo-historic piece of wood struck on the knee, designed for the most unsophisticated farm intellect, one very significant detail was missed, which the authors of this version diligently bypass the tenth expensive. And, I must say, get around for a reason.

Because this is such a detail that, being shown to a wide audience, does not just deprive them of building their original meaning, but also threatens them with very big troubles as direct supporters and "roofers" of the most heinous crimes of Nazism, including the Holocaust.

Carefully concealed historical facts from the general public is that the actions of the Soviet Union taken in 1939-40. in Eastern Europe, they were actually a rescue operation in the interests of European Jewry, during which hundreds of thousands of lives of people of this nationality were saved. In essence, the USSR was at that moment the only country in the world that provided real help to European Jews and in fact saved many of them from inevitable destruction. If it were not for these proactive actions of the USSR, the scale of the Holocaust in Europe is already in the 1939-40 years. would be much more ambitious.

After the attack of Hitler's Germany on Poland 1 of September 1939 of the year, a huge number of Polish Jews, who had heard about the man-hating and anti-Semitic "racial laws" adopted in the Third Reich, rushed to escape to the east in the hope of finding salvation there from Nazi arbitrariness. The entry of the Red Army into the territory of Poland 17 September 1939 of the year, which can hardly be called aggression simply because no one offered resistance to it, turned out to be good news not only for the Western Ukrainians who suffered from the oppression of the Polish gentry, but also for hundreds of thousands of Polish citizens of Jewish nationality. some of which, once in the Soviet Union, avoided certain death in concentration camps and ghettos in the German occupation zone.

The scale of the flight of the Jewish population to the Soviet zone of control from the part of Poland occupied by the Germans can be judged, for example, by such a separate fact. "By June 1941, the Jewish population of Kremenets in Volyn increased by four thousand people at the expense of refugees from Poland occupied by Germany", - attests Electronic Jewish Encyclopedia ".

That is, the population of this town has increased by almost half. It remains to add that there were dozens of such towns, flooded with Jewish refugees in 1939-40, in the liberated Red Army of Western Ukraine. And the total number of Jews who found salvation there amounts to a figure substantially exceeding one million people.

If the Soviet Union had not undertaken its liberation campaign then, all these people, no doubt, would have been in Auschwitz, Treblinka and other similar places, the only way out of which was through the crematorium pipe. In other words, it was the USSR that, by its actions, in contrast to the absolute inaction of the Western powers at that time, turned out to be the only country in the world that took real steps to limit the scale of the Holocaust in those European territories where it would otherwise be completely inevitable.

Especially given the very peculiar policy of the West, which verbally condemned Nazi anti-Semitism, but in practice did not do anything to stop the European Holocaust. And even more, he helped Hitler in his black case, forcing in some cases Jewish immigrants from European countries to return to their homeland, where inevitable death awaited them.

However, with the situation with Poland, the theme of Moscow’s salvation for European Jewry in the initial period of World War II is by no means exhausted. About the same situation arose and in relation to neighboring Romania.

“When the Soviet-German non-aggression pact was signed in the summer of 1939, Germany agreed to return Bessarabia and Northern Bukovina to the Soviet Union, which at that time were part of Romania. This caused serious problems for the Jews living in these territories. In Bukovina and Northern Moldavia, villagers and soldiers of the withdrawn Romanian troops put out their anger on the Jews and killed hundreds of people. At the same time, the Romanians, trying to please the Germans, adopted laws that would deprive the majority of Jews of their citizenship and prohibit marriages between Jews and Romanians. With the return of the above territories to the Soviet Union, Hungary and Bulgaria, the Romanian Jewish population has been reduced from 760.000 to 342.000. ”

In other words, after the return of these territories to the Soviet Union, more than half of the Jewish population of Romania was saved from becoming potential victims of pogroms, massacres and Nazi concentration camps. What is confirmed by the fate of the remaining part in Romania:

“When Romania joined Germany in the war against the USSR, Hitler informed Antonescu about his plan to destroy European Jewry. Antonescu expressed his willingness to contribute to the implementation of this plan. The army was ordered to take city Jews into custody, and the police to kill Jews in rural areas. The German and Romanian military units, with the assistance of the Einsatzgruppen, carried out operations to exterminate the Jews of Romania: at the first stage 160.000 people were killed, tens of thousands more Ukrainian Jews were killed by the Romanian army and police. In September 1941, Antonescu ordered the deportation of 150.000 Jews to Transnistria. Tens of thousands of them died along the way. ”

Thus, the Soviet Union saved about two million European Jews from their extermination by the Nazis in 1939-1940. is an indisputable historical fact. As well as the fact that such salvation became possible only thanks to the active actions of the USSR and its Red Army in the territories of some neighboring states. If it were not for these actions, no one would have saved these people.

And those villains who today are straining to rewrite history and make the Soviet Union the culprit of the war, along with Hitler’s Reich, are in fact the direct accomplices of the Nazi thugs. And the same followers of the Holocaust, like Adolf Hitler, Heinrich Himmler, Adolf Eichmann and other executioners of the Jews of Europe.

And the most disgusting fact is that in Ukraine, these accomplices of mass murderers, who have the audacity to actually condemn the Soviet Union for the unprecedented act of saving millions of human lives, are the leaders of the current Kiev regime. Almost all of them are Jewish. Truly, such vile traitors and traitors of their own people didn’t give birth to the womb of a Jewish mother in thousands of years of Jewish history!

Ctrl Enter
Noticed oshЫbku Highlight text and press. Ctrl + Enter
We are
Situational analysis of the death of the MH17 flight (Malaysian Boeing 777), made on the basis of engineering analysis from 15.08.2014The tragedy of the American army ("The Atlantic", USA)
Military Reviewin Yandex News
Military Reviewin Google News
86 comments
Ad