What does the photo of the Shell in Syria tell about?

12 May 2018
438
Photos of the Pantsir-S1 anti-aircraft missile and cannon complex, which belonged to the Syrian government army, appeared on the web. This is the ZRPK, which was located at the Mezze military base near Damascus.


Recall that on video frames, which were previously published in the Israeli Defense Ministry, it was clear that the defeat was carried out from the air. Initially, it was possible to assume that the ZRPK was not in a state of alert. In fact, this information is confirmed.

Arab sources citing Syrian troops say that the attack was carried out using drones. It is stated that we are talking about a kamikaze UAV armed with explosive ordnance. 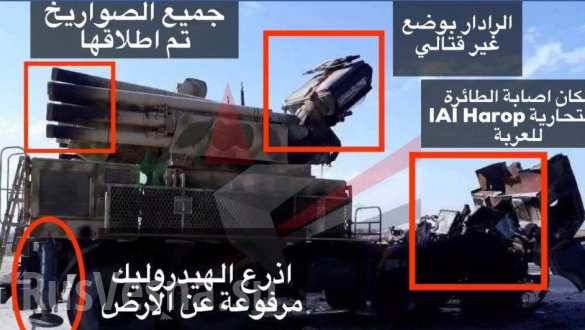 The photo clearly shows that all ZRPK missiles are shot out (carbon deposits on the pipes), the radar is not in the active position, the hydraulic stand is raised (it is lowered when it is being made for shooting and stabilizes the position of the machine).

Thus, one of the assumptions is confirmed: the attack on the Pantsir-С1 was carried out after it became clear that he had shot his own ammunition. He had nothing to repel the attack. In all likelihood, the CAA soldiers raised the rack to go to recharge. At this point, the Israeli military and carried out an attack ZRPK, waiting for the right moment.

At the same time, as can be seen from the photo, the entire car was not destroyed by an explosion: the cab and the front wheels of the chassis were severely damaged. The power of the explosion was not sufficient to completely destroy the complex. It can be assumed that the launcher itself must be restored if it received any damage.

Earlier it was reported that as a result of the attack on the "Shell-C1", an officer of the CAA, Lieutenant Ali Mustafa, was killed. It was he who started to run to the ZRPK cab several seconds before the strike.