The defeat of the Poles under the Yellow Waters 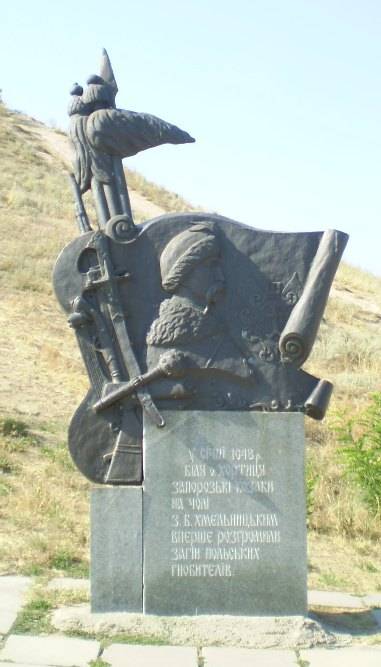 In the battle of Yellow Waters, the Polish Potocki detachment was destroyed. This was the first serious victory of the insurgent people.

For the government of the Polish-Lithuanian Commonwealth and the Polish magnates, the uprising in the Zaporozhian Sich and the possibility of a large-scale war in Little Russia became a matter of paramount importance. The great crown hetman Nikolai Pototsky, unable to force the rebels to capitulate, decided to go on the offensive. 21 March 1648 of the year he wrote to the king: “It was not without reflection and thorough reasoning that I moved to Ukraine with the army of your royal mercy, my pan and my benefactor. Very important motivations have led me to this: the preservation of the integrity and dignity of both your royal favor and the fatherland itself and its freedom. ”

Pototsky noted that "it is easy to destroy 500 people of rebels," but the fact is that "these 500 raised a riot in a conspiracy with all the Cossack regiments and with all of Ukraine." “This reckless person, Khmelnitsky,” wrote Pototsky, “will not bow before mercy.” All embassies to the leader of the Cossacks failed. Pototsky informed the king that Khmelnitsky called the Tatars for help, and they had already come to him.

At that time, under the banner of Pototsky, there was a large army at that time — about 24 thousand soldiers with artillery. The main forces were located between Cherkasy and Korsun. Pototsky was in Cherkassy, ​​and in Korsun hetman Martin Kalinovsky made his bid for the field. The Polish military camp was also led by Adam Sinyavsky, a nobleman, coronet carriage Kazanovsky, Polish Cossack commissar Jacek Shemberg, who had their own banners (squads). Under hetman Pototsky, his son Stefan also consisted, who dreamed of smashing the rebellious Cossacks and thereby gaining his fame as a commander. Arrogant gentry, as usual, overestimated their strength and underestimated the enemy. Time was spent in drinking and boasting how they would destroy the rebels.

In April, 1648, the Poles received news that Khmelnitsky had left Zaporizhia. At the military council, Kalinowski reasonably suggested that the entire army should immediately come out against the rebels and crush Khmelnitsky. However, the majority of Pototsky’s advisors considered it a shame to send such a large army against the “despicable gang of mean flakes”. Like, the smaller the unit, the more glory from the defeat of the rebels. As a result, not all the forces went on the march, moreover, they were divided into two groups: one went across the steppe, the other - on the ships along the Dnieper. A squad of zholner (infantry) and cavalry led by the second son of Nikolai Pototsky, young 24-year-old Stefan Pototsky, who was reinforced by experienced captain Shemberg (5 – 6 thousand people and 12 cannons), moved across the steppe. A detachment was marching along the Dnieper under the command of the general captains Esaulov Ivan Barabash and Ilyash Karaimovich (4 thousand registered Cossacks and 2 thousand hired German infantry). Both detachments were to unite at Kamenny Backwater and strike at the lower Cossacks. As a result, the fragmentation of forces, and especially the separation of the registered Cossacks into an independent column, was a major mistake of Hetman Potocki, which Khmelnytsky skillfully used.

Transition Registered Cossacks to the side of the rebels

Khmelnitsky had supporters in the Polish camp, so he knew well what was going on there. And as soon as he was informed about Pototsky’s plans and the enemy’s speeches, he immediately assembled a detachment and went towards the Poles. Along the way, the hetman decided to smash the enemy's advanced forces in parts, and then strike the main forces of Potocki. The Khmelnytsky Cossacks walked along the Bazavluk River and soon came to the Yellow Waters flow (a tributary of the Ingulets River). Here the Cossacks settled down in the camp, reinforcing it with earthen defenses. The Tatars stood aside for the swamps. Tugay-Bey decided not to hurry, but to wait when there will be a break in the battle.

On May 3, a detachment of Stefan Potocki approached the Yellow Waters and crossed over to the left bank. Having found the enemy and its fortified camp, the Poles went back across the river. On the right bank, led by Schemberg, the Poles laid a fortification in the form of a triangle. Here they decided to wait for the second detachment, which descended down the Dnieper. A report was sent to the great crown hetman Nikolai Pototsky with a request for reinforcement, but the messenger was seized by the Tatars, and the report did not reach. The Cossacks tried to attack the enemy, to bring their positions to the Polish camp, but failed. After that, minor skirmishes began, without much success of either one or the other.

However, Bogdan was able to win the first victory before the decisive battle. Khmelnitsky could seriously weaken the enemy troops and strengthen their own. On the bank of the Dnieper, Bogdan set up Cossack posts headed by Colonel Ivan Ganzha from Uman. As soon as the boats approached the coast, the patrol Cossacks began to call on the registrants to leave the lords and go to the side of the rebels. In the first kayak the Cossacks, led by Colonel Krichesky, swam. He recognized Ganju and ordered him to land on the shore. Krichevsky gladly joined Khmelnitsky, followed by other registry Cossacks. When most of the Cossacks came ashore, they gathered a rada. The Cossacks refused to shed the blood of their brothers, agreed to stand up for the faith, the Cossacks and the entire Russian people. Esaulov Barabash and Karaimovich were deposed and executed as traitors. Instead, Philo Jejelia was elected as the elder. They also killed German mercenaries with a sudden blow. Then everyone was distributed on the shelves and moved to join the main forces of Khmelnitsky. Khmelnitsky squad increased by several thousand fighters. It was a strong blow to the Poles, who had lost their former arrogance, were weakened morally and numerically.

In the morning of May 5, Pototsky ordered the dragoons and Polish banners with artillery to leave the camp to attack the Cossacks. At this time, Khmelnitsky was preparing his army for battle. At this time, part of the Cossacks, which remained in the camp of Potocki and Shemberg, also went over to the side of the rebels. And followed by the dragoons, which were also recruited in the Ukraine. Polish cavalry with artillery had to hide in the camp. In addition, reinforcements arrived in the army of Khmelnitsky - Don Cossacks with Cossacks who were on the Don. Cossacks got a significant numerical advantage.

The next day, the Cossacks attacked the Polish camp from various sides. The Poles fought back courageously, the Cossacks failed to break them. But the Polish camp was surrounded on all sides, and the besieged were cut off from the water. The letter that was sent to the crown hetman with a request for immediate assistance and was intercepted by the Cossacks, with ridicule, showed the Poles, inviting them to "give themselves up to the mercy of the flames." The position of the Poles was desperate; they could not be besieged without food and water.

In the circumstances, the young Pototsky and Schemberg had no choice but to forget about pride and negotiate with the “slaves”. It suited Khmelnitsky, too, who did not want to linger, besieging a small Polish detachment and losing people. He said: "Do not ruin yourself in vain Panov, victory is in my hands, but I do not want brotherly blood." The Poles sent Charnetsky for negotiations, and Khmelnitsky sent Maxim Krivonos and the centurion to the Rat. Khmelnitsky tightened the negotiations, and at this time Krivonos and the Rat in the Polish camp were persuading registered Cossacks, who still remained in the Polish camp. Soon all registrars left the Poles. Shemberg, being more experienced and seeing the hopelessness of the situation, offered to accept the conditions of Khmelnitsky - to surrender the artillery with the condition that the Cossacks would allow to go to Krylov. “Not only for us, but for the whole of the fatherland, it will be more useful,” he said at the council, “if we are buying from certain death with unimportant tools; but we will gain time, we will join the army and give it the opportunity, having learned in time about the rebellion, not to let it flare up ”.

Pototsky and other commanders agreed. They only demanded that the Cossacks swear an oath to seal the promise to release them unhindered. Cossacks swore. Polish guns were taken to the Khmelnitsky camp. They were very necessary to him: he had only four guns. On May 8, the Poles hurriedly headed back from Yellow Waters, hoping to join their own soon. They calmly passed three miles, here they had to pass through the beam of Princes Bayraki. Here they were attacked by Tatars, who did not give any vows. Before this, the Crimean Tatars, as Siluyan Muzhilovsky, ambassador of Bogdan in Moscow, later wrote, “looked from the side who had a close sop”. Seeing that the Cossacks were winning, they rushed at the fleeing Poles.

At first, the Poles thought to get along quickly, but it was extremely difficult to go over rough terrain covered with shallow forests. In addition, the Cossacks earlier, when the Polish camp was under siege, dug the earth even more with ditches, made heaps of trees and stones. The path became impassable, even in conditions when it was necessary to repel enemy attacks. Then Pototsky ordered a wagenburg from the carts and a shaft to be filled. The Poles resisted desperately. The Tatars took Polish guns from the Cossacks, fired on a hastily built camp and broke into it from all sides. The carnage began. Potocki, already dying from his wounds, was taken prisoner. All his associates, who survived, laid down weapon.

As a result, the Polish squad was destroyed. Many soldiers died, survivors were injured, including Potocki and Schemberg. Khmelnitsky sent the son of the great crown hetman Pototsky to Zaporozhye and ordered to protect his eyes. But Pototsky died on the road from wounds. The rebels seized 8 guns with ammunition, a large number of firearms and cold weapons.

This was the first victory of the insurgent people. The battle of the Yellow Waters has not yet had a decisive military strategic importance. The rebels broke only part of the Polish avant-garde. However, this fight showed the weakness of the enemy - the underestimation of the rebels, the support of the rebels Cossacks from the people. Registered Cossacks and dragoons did not begin to fight with their own and went over to the side of the Khmelnitsky warriors. But Bogdan showed solidarity and ability of his troops. 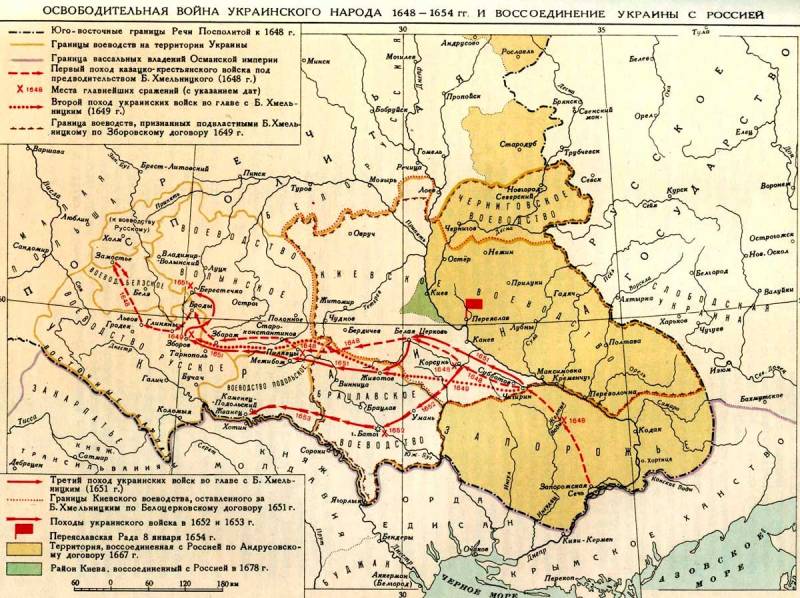 370 years ago, the national liberation war of the Russian people against the Polish invaders began
As the Poles pursued a policy of genocide of the Russian population who did not want to live in slavery
"The Russian land will rise, it has never risen as never before"
"There is no other way how to break the Poles with the power and fear of death"