The most expensive helmets. Part Seven. Helmets with horns

14 May 2018
135
The series of articles about the “most expensive helmets” aroused interest among VO readers. Many began to offer their options for the development of this topic. Someone asked to tell about some specific samples, which, however, is not always possible, although expensive helmets, sometimes standing a fortune, at least a dime a dozen. Today, in the continuation of the topic, we will talk about helmets with horns, since it was the “horned helmet” that became, unfortunately, an integral part of our culture, or rather, our “knowledge” about the past. Especially got the Vikings. In helmets with horns they are depicted on monuments, on picturesque canvases, in movies. And, probably, if you go outside in any Russian city and ask: “What is the main difference between Viking helmets and helmets of all other nations?”, The answer will be the same - “horns”. However, the “horned helmet” was known in the Bronze Age, moreover, both from its images and from archaeological finds. 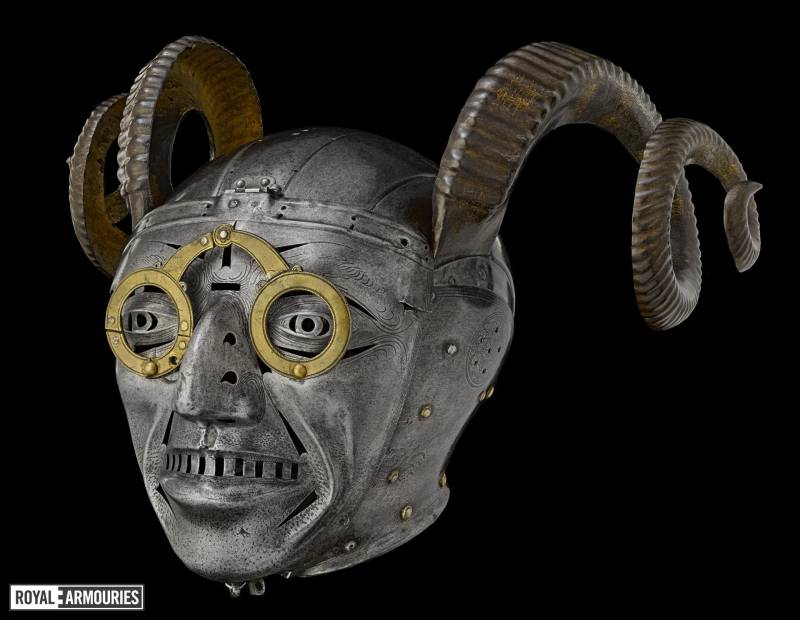 The most famous “helmet with horns” is undoubtedly this one - the helmet of the English King Henry VIII, which has been exhibited at the Royal Arsenal in Leeds since 1994. 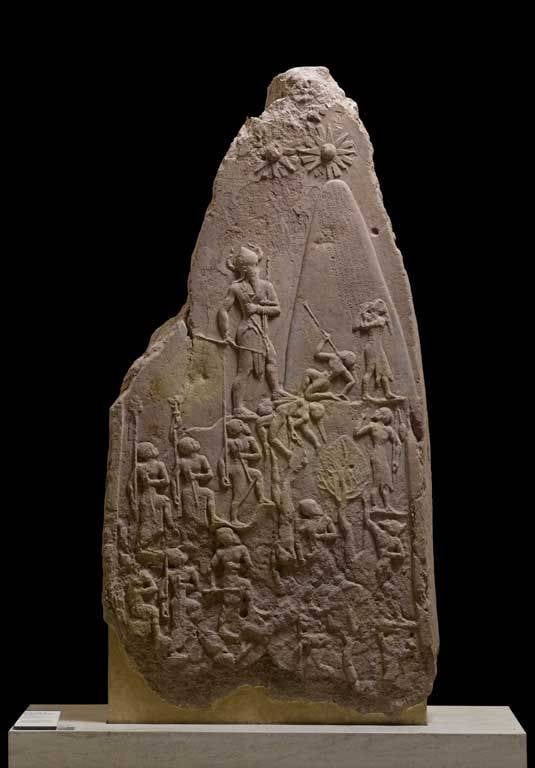 To begin with, the image of a warrior in a helmet with horns can be seen on the bas-relief of Naram-Sin from the Louvre, which depicts how he defeats some lullubes. On it, the helmet is clearly decorated with horns, and a very distinctive shape. Then we know two bronze figurines relating to the XII century BC. er., which are found in Cyprus during excavations at Enkomi. They depict warriors (or at least one depicts a warrior) in helmets with horns. 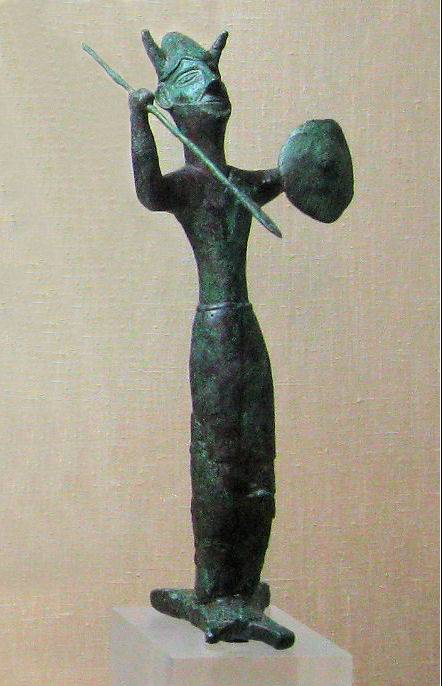 “The Horned God of Enkomi” (Archaeological Museum in Nicosia). 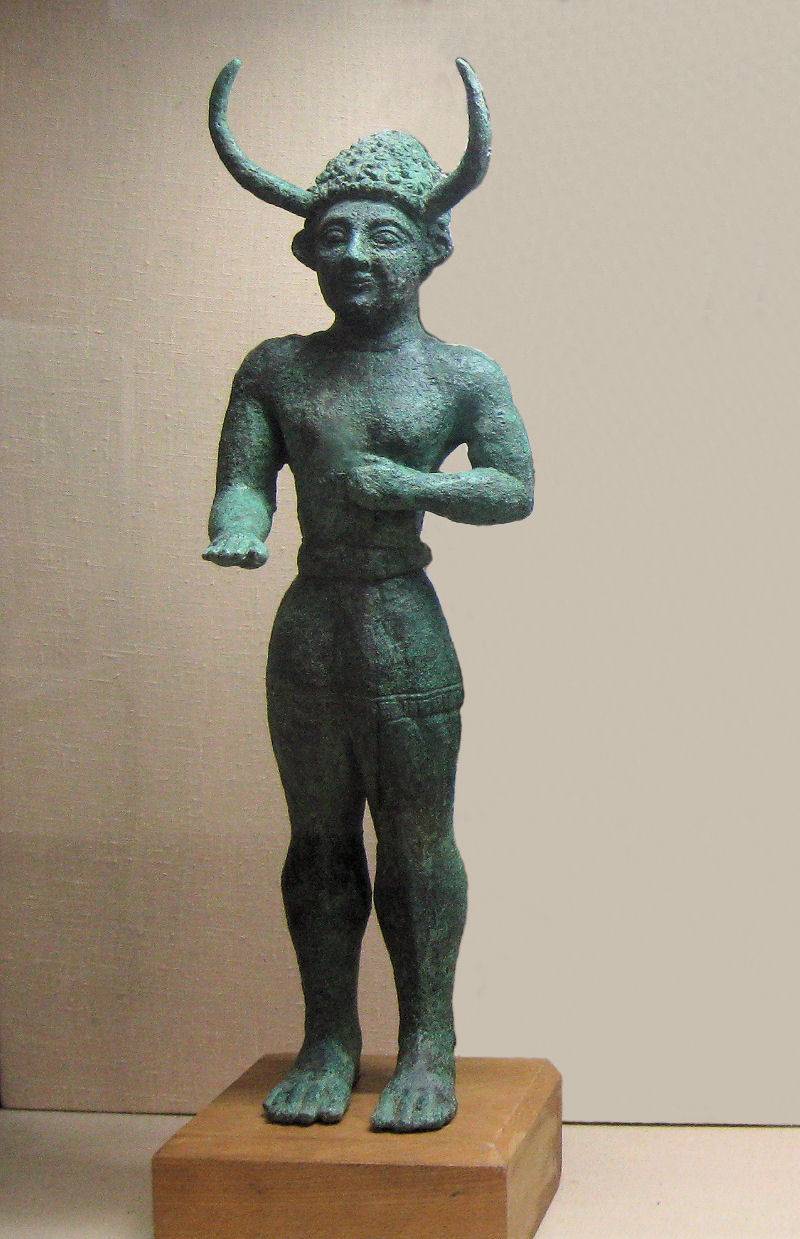 The second (or first?) Statuette from Enkomi. 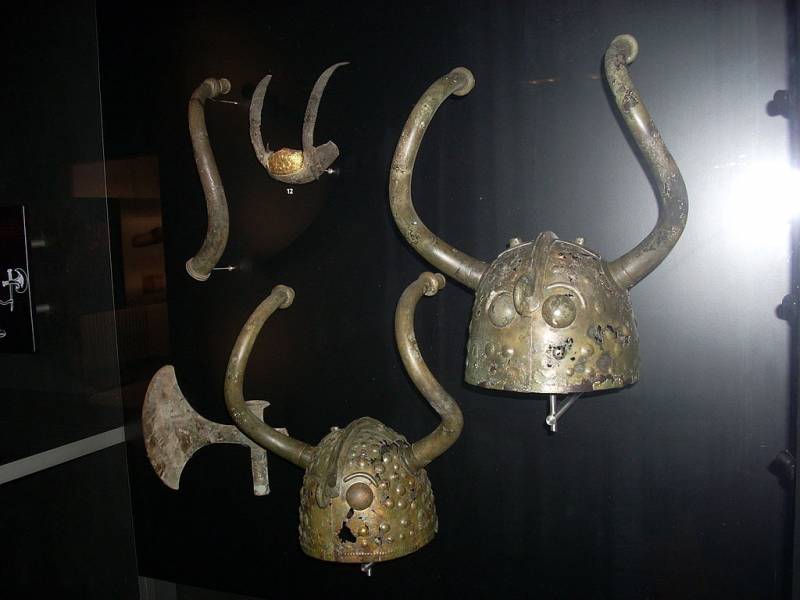 Two later bronze helmets (1100 — 900 BC), archaeologists found near the town of Veksø in Denmark in 1942. But these are clearly non-combat helmets, and they have no ritual, and even to the Vikings (and even the Celts!). (National Museum of Denmark, Copenhagen) 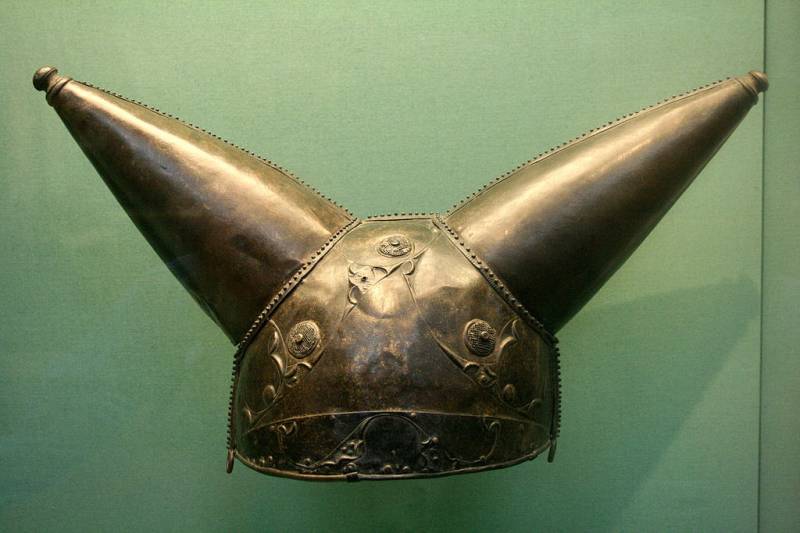 The Celtic Bronze Helmet is the so-called “Waterloo Helmet” (150 — 50 BC), found at the bottom of the Thames in central London near the Waterloo Bridge in 1868. The helmet is made of very thin metal (bronze) and, most likely, was a ritual headdress. 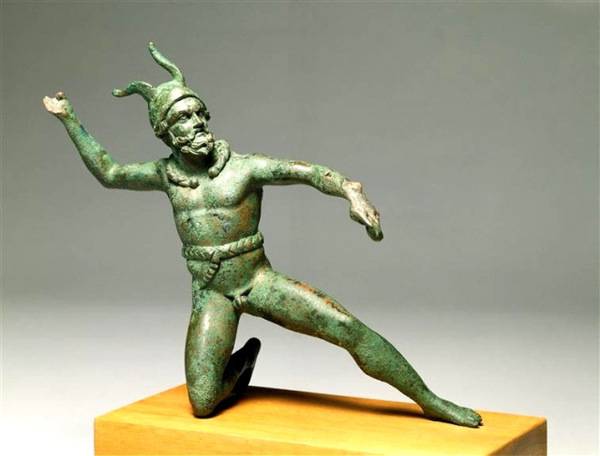 Naked Celtic warrior in a horned helmet. III century BC The find is made in northern Italy. (Berlin Museum) 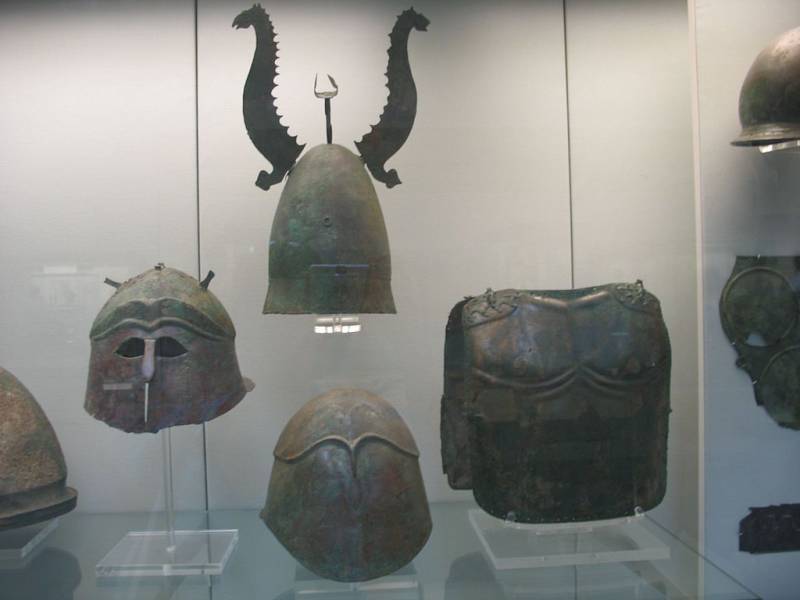 Horns could be found as decorations even on the helmets of the ancient Greeks.

The image of a warrior wearing a horned helmet is on a “Gundestrup Cauldron” - a silver chased vessel of Latan culture (around 100 of the year BC), found in Denmark (North Jutland) in a peat bog near the village of Gundestrup in 1891. And this is clearly Celtic work. So it is quite possible that the horned helmets were used by the Celts, but still were not a characteristic attribute of their military culture. 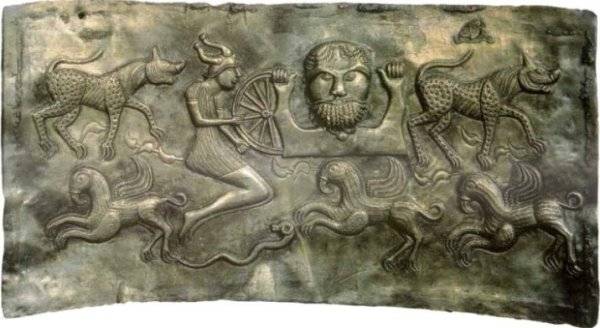 Here it is - the image on the boiler from Gundestrup ". Plate S. (National Museum of Denmark, Copenhagen) 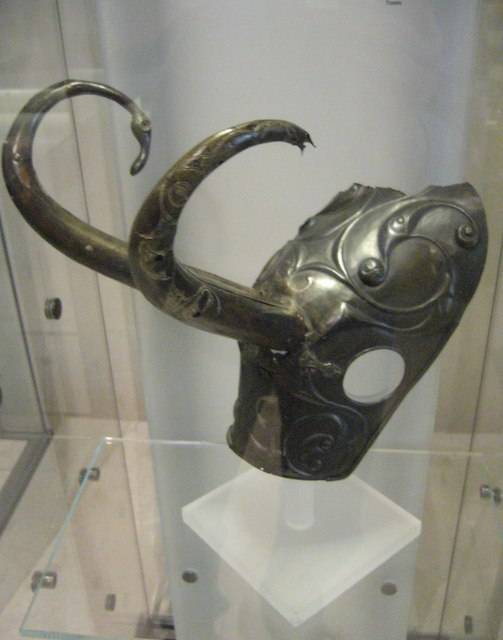 Helmet ornaments maedate, which had the form of flat horns of metal plates, decorated with many helmets of Japanese samurai, but they were located above the visor. However, there were helmets with huge horns of water buffalo, strengthened, as it should be on the sides. Such "horned helmets" were worn as a rule by victorious commanders. 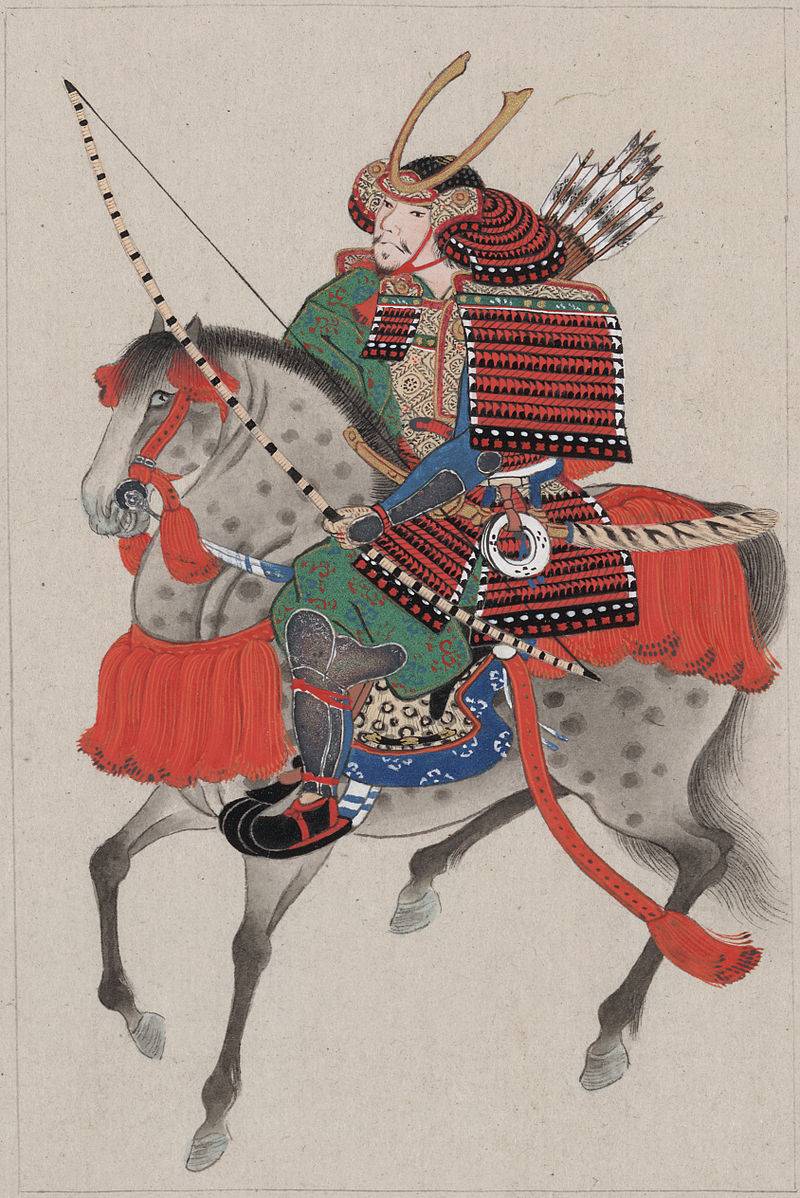 Images of samurai in such helmets, as well as the helmets themselves, have survived, well, just a lot. This, for example, is an image of a samurai wearing a maedate horned helmet located in the Library of Congress, Prints and Photographs Department. 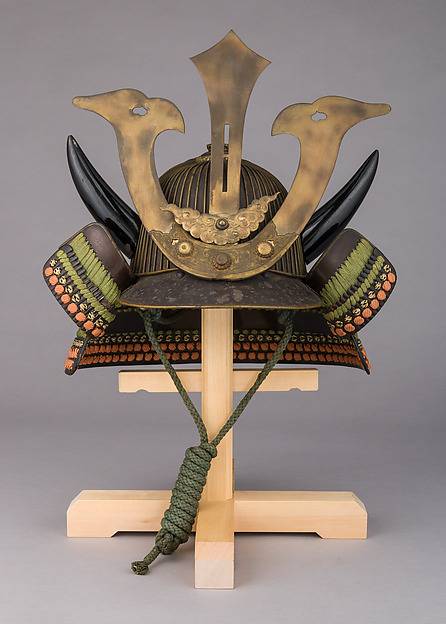 And here is one of the Japanese horned helmets like suji-kabuto, XVIII century. Copper, gold, lacquer, silk, wood. Weight 3041.9 g. On it and the helmet decoration maedate, and the real horns on the sides! (Metropolitan Museum, New York) 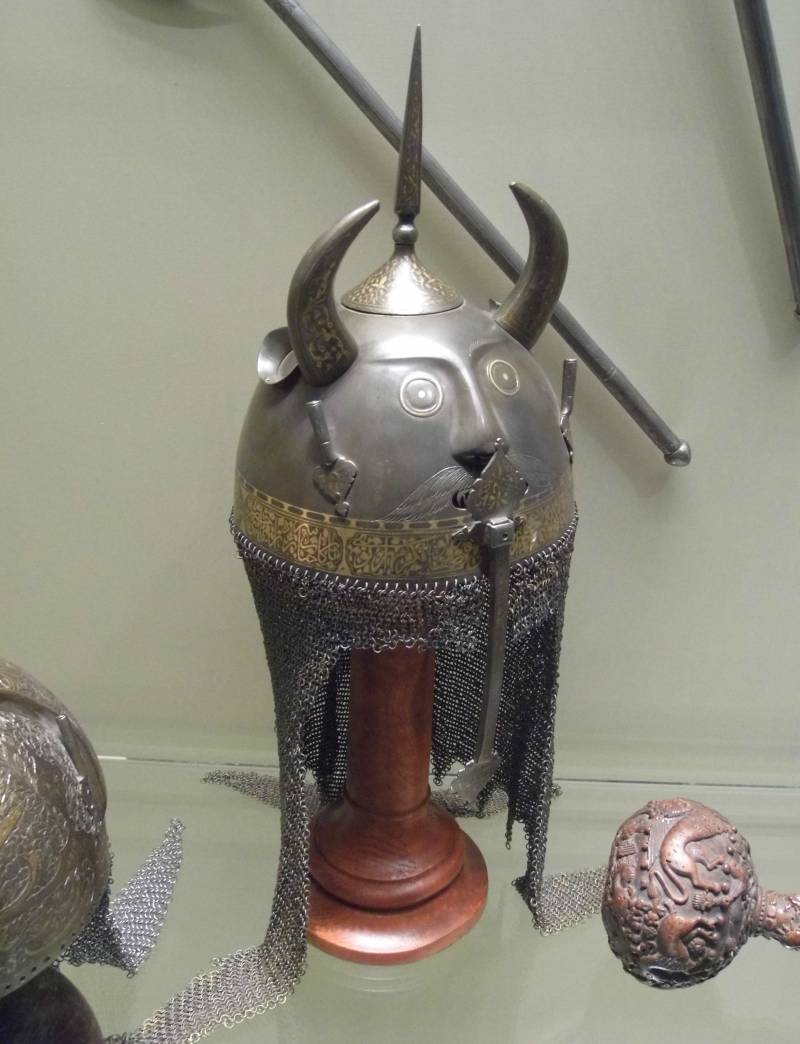 Indo-Persian warriors also wore horned or spiked helmets. The helmet in front of you is an exhibit of the State Hermitage Museum in St. Petersburg. (Photo by N. Mikhailov) 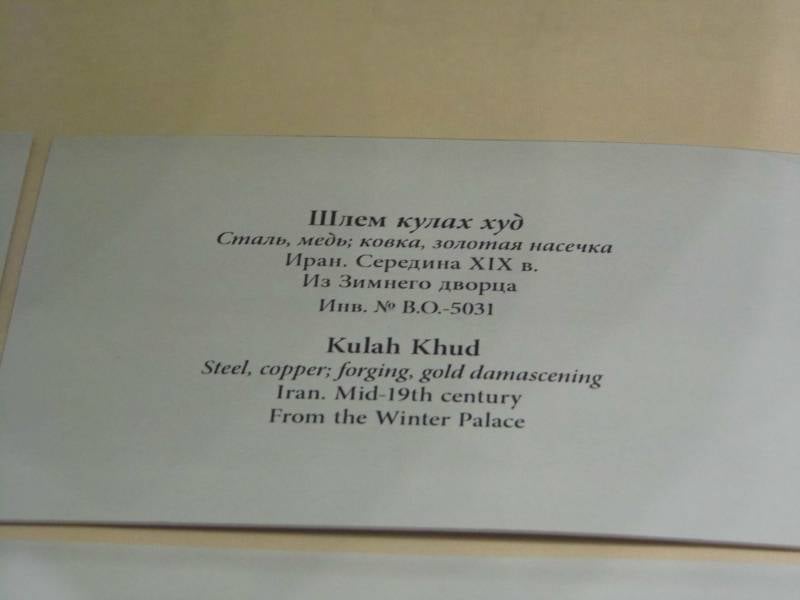 About him it is known that it is a helmet called Kukh Hood, mid-XIX century. Steel, copper; forging, gold notch. The horns, as you can see, are attached in such a way that it would be difficult to strike a strong side impact on them. (Photo by N. Mikhailov) 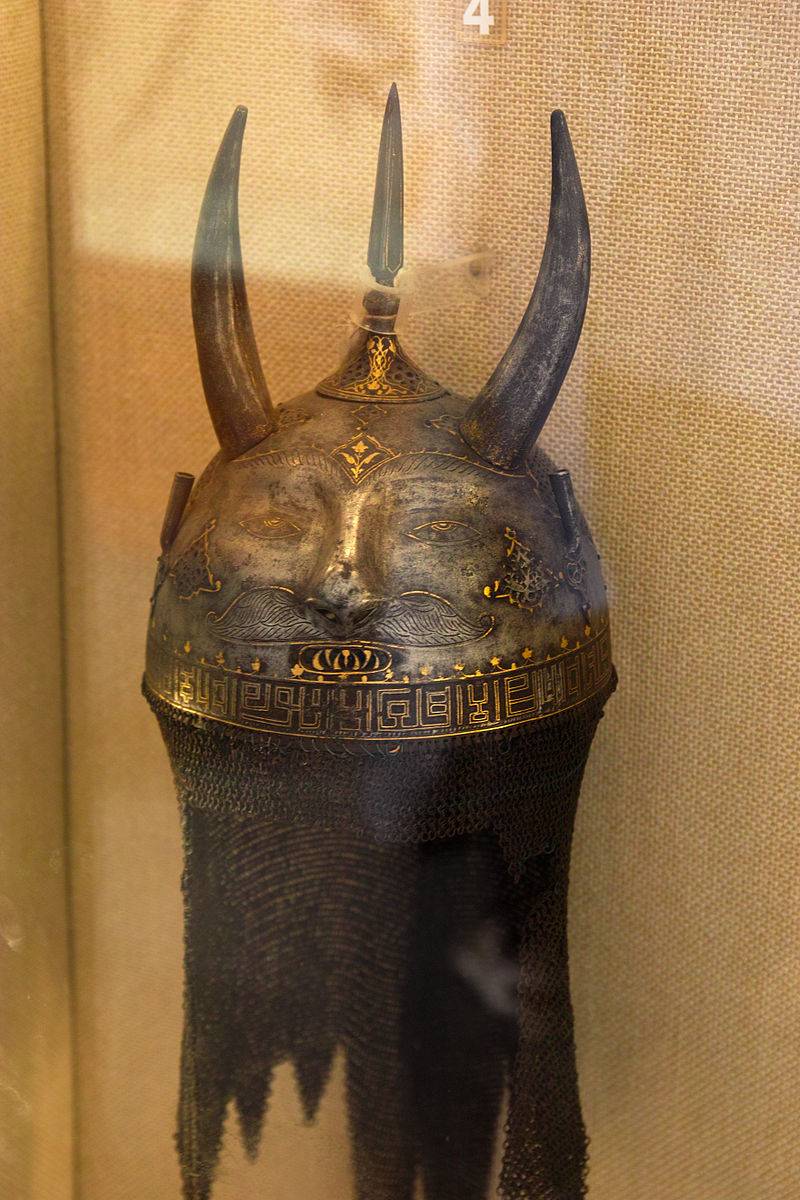 Such helmets were obviously quite a lot. Therefore, there are many of them in museums. Helmet from the Central Museum in Jaipur, India.

Well, the fact that in the mass culture of the Vikings are depicted in horned helmets, it is not surprising. This myth arose due to the efforts of the Catholic Church, since it was she who was the main provider of information about the Vikings. The priests and monks declared them "the devil's offspring", described their "devilish cunning", "devilish cruelty" - in a word, they created an extremely repulsive image of the enemies of the Christian faith. And then in 1820-ies, Swedish artist August Malmström painted horns on Viking helmets in illustrations for the poem “Frythof Saga” by the Swedish poet Esaias Tegner. The book was republished many times, and in different languages, and this myth gradually spread. In Germany, for example, the artist Karl Doppler used these very drawings when he designed costumes for Wagner’s opera The Ring of the Nibelung. 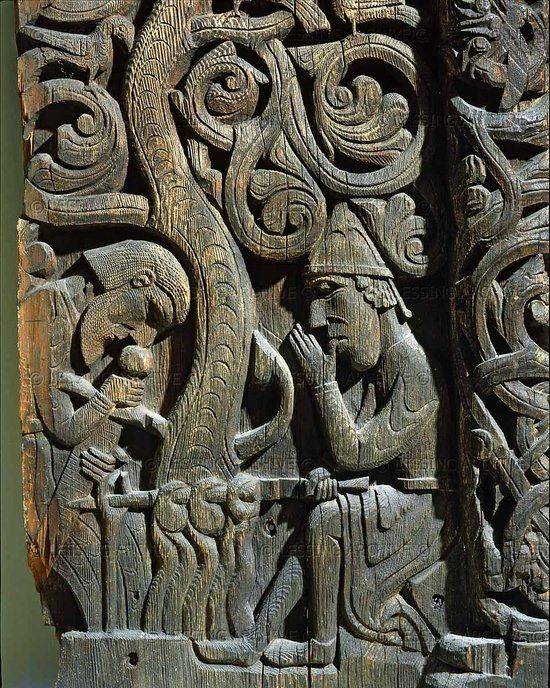 A wooden panel depicting a viking in a helmet from a church in Setesdal, Norway (12th century). (Viking Museum in Oslo)

In the XIII-XIV centuries, knightly helmets such as topfhelm, both combat and tournament ones (as can be clearly seen from the miniatures of medieval manuscripts), also sometimes had helmet-mounted ornaments. 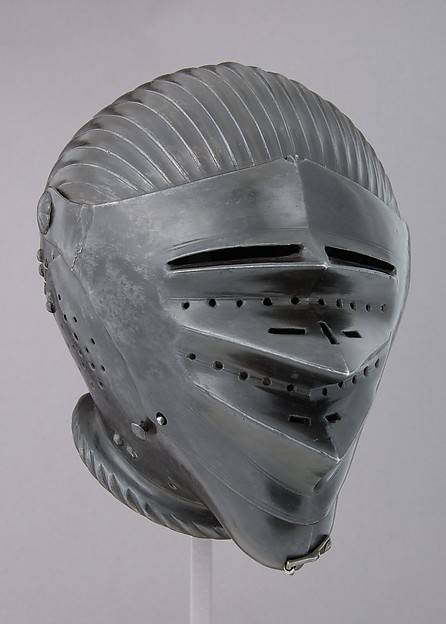 As for the helmet of the English king Henry VIII, it appeared in the era of “maximilian armor” (i.e., corrugated), but it looks very specific. It is believed that this strange horned helmet, along with the armor, was presented to Henry VIII by Maximilian I, the emperor of the Holy Roman Empire, who invented this armor and contributed to its spread. What did he want to say or show with this gift? That Heinrich is a jester and not a king? Or something different? In any case, in terms of value it was a truly royal, or rather, imperial gift, and Henry, even if he thought something bad about him, nevertheless could not not accept it. 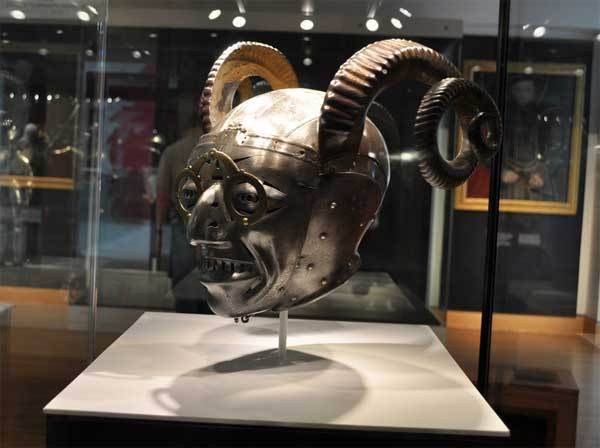 Helmet in the exposition of the Royal Arsenal in Leeds. 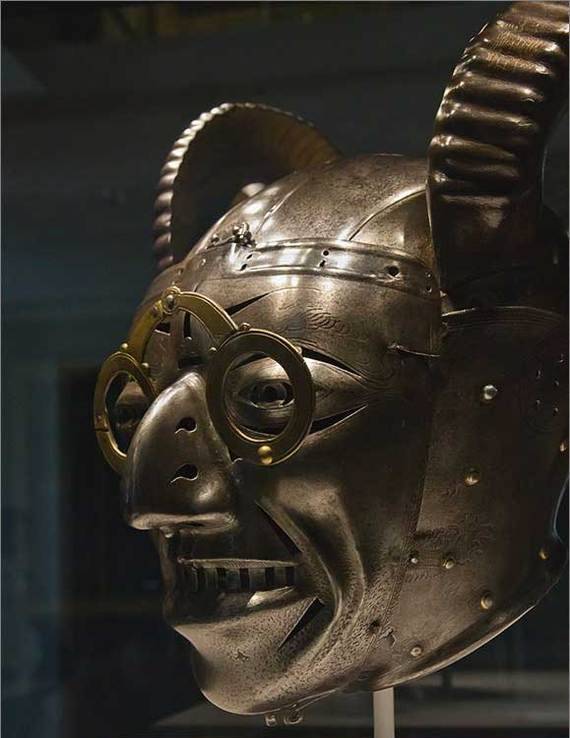 The helmet is of a typical arm design, although it differs from ordinary helmets of this type by the presence of a number of specific details. Well, first of all, it is gilded drum horns, roughly attached with two large and one small rivets. The “cheeks” repeat the shape of the skull, and are similarly rimmed. On both ears there is an engraved flower rosette with six punched holes. The mask is a helmet visor. It has an original design with a loop attached to the frontal part. It depicts a person with a long hooked nose, and it has a lot of holes on it, which undoubtedly served for ventilation. The engraving on the "face" depicts stubble, folds in the corners of the eyes, eyebrows and hair above the upper lip. Such careful reproduction of such details could well have been calculated for a humorous effect. And, of course, bronze glasses are striking. The left rim ring is riveted from two halves, the right one is solid. Glasses in a frame were not provided initially.

At one time it was believed that this was the armor for the royal jester Somers, but you need to imagine their cost, and then decide whether the king (even if the king!) Could order armor for the jester, or the jester himself, even if he was a noble would have such an opportunity. 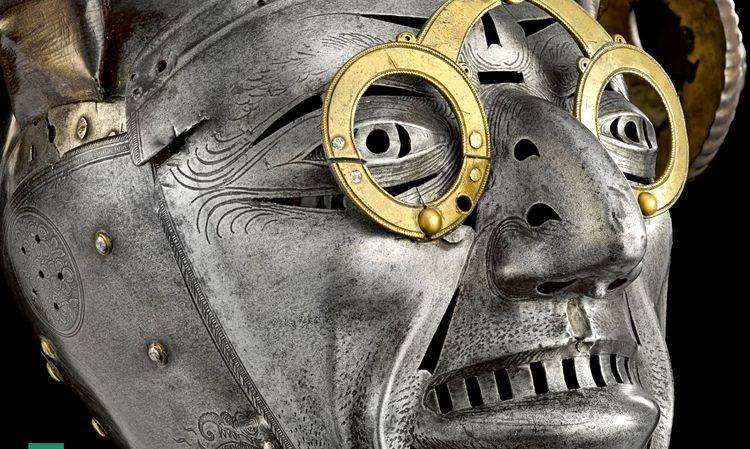 As you can see, such details are reproduced on the helmet, which, in general, are completely unnecessary for a combat helmet ...

The helmet is heavy enough, its weight is 2.89 kg. It was made by the master from Innsbruck Konrad Seuzenhofer in 1512. Later, namely in the XVII century, this helmet was shown at the exhibition in the Tower, where it was reported that it was part of the "Will Somers" armor, court jester Henry VIII. For a long time no one knew at all who he really belonged to. Recently, there have been serious scientific doubts about the authenticity of this helmet. For example, were the horns of a ram and glasses really a part of it, or were they added later? But most importantly, why should such a bizarre object be a gift from one monarch to another? In any case, this helmet is truly unique, and expensive, as a historically “priceless” relic.

P.S. The author and the editorial board of the VO website express their appreciation to N. Mikhailov for his filming of the Hermitage exhibits and the photos provided to them.

Ctrl Enter
Noticed oshЫbku Highlight text and press. Ctrl + Enter
We are
About the Vikings and their weapons ...Vikings - truth and fiction
Military Reviewin Yandex News
Military Reviewin Google News
135 comments
Information
Dear reader, to leave comments on the publication, you must sign in.