Mockery of St. George ribbon. Who laughs at Victory and Russia?

14 May 2018
249
Recently, the St. George ribbon has become the favorite object of criticism and even outright attacks and mockery on the part of virtually all anti-state and anti-Russian forces. She is criticized, scolded and ridiculed by Ukrainian Nazi and Russian liberals, and some patriots echo the advocates of American “democracy”, who are convinced that the St. George ribbon is not a symbol of 1945 Victory.

Unlike the Ukrainian nations, for which the St. George ribbon is just an enemy sign (prohibited, by the way, in Ukraine), Russian patriots argue that during the Great Patriotic War the St. George ribbon was not used or was used very rarely and did not carry the semantic load that was given to it already in the post-Soviet period of domestic stories. Some of them call the St. George ribbon almost the symbol of the Russian liberation army of the traitor-general Vlasov. For example, the well-known journalist Alexander Nevzorov, speaking of St. George's ribbon, declared that it was carried by traitors General Vlasov and Ataman Shkuro, and in the Red Army she was at first unknown at all, and then rarely used and then after 1943.

They began to attack the ribbon and some communists who accuse the Russian authorities of replacing the true symbols of the Great Victory with the St. George ribbon. Having read - having listened to the revelations of these people, our fellow citizens, who are not particularly experienced in questions of the history of the Great Patriotic War, even begin to doubt the St. George ribbon as a symbol of the Great Victory. Do St. George's colors really have nothing to do with the victorious Red Army and its immortal feat in 1941-1945?

Let's start with a brief history of the St. George ribbon itself. The two-color ribbon was established by Empress Catherine II 26 on November 1769 of the year during the Russian-Turkish war, but since the 1730-s, black and yellow were considered colors of the Russian Empire. In 1913, the statute was adopted, which stated that the St. George is called “a tape of three black and two orange stripes, worn over the right shoulder.” The colors of St. George received the greatest distribution during the First World War - in connection with the massive awards of war heroes to the Order of St. George. Full St. George knights had the right to wear St. George's ribbon in winter time over the side of the overcoat.

During the Civil War, the St. George ribbon was actively used in the White Movement, which did not refuse “tsarist” awards of the pre-revolutionary type. In Soviet Russia, until the outbreak of World War II, the St. George ribbon went out of use. However, almost immediately after the outbreak of the war, the leadership of the country and the high command had a need to revive the developed system of awards for both individual military personnel and units and formations of the Red Army and the Naval fleet. 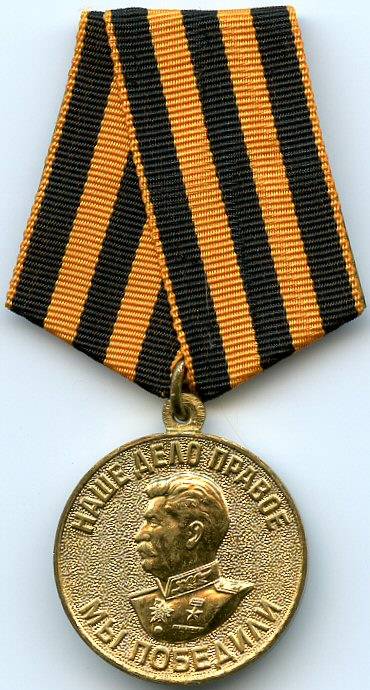 The St. George Ribbon has already become an authentic symbol of the Great Victory on May 9 of the year. It was then, the day after the signing of the Act of unconditional surrender of Hitler's Germany, the Presidium of the Supreme Soviet of the USSR established a new state award - the medal "For the Victory over Germany in the Great Patriotic War 1945 — 1941”. As we know, it is the St. George ribbon that blocks the medal. The medal "For Victory over Germany" has become one of the most massive awards of the USSR. She was awarded 1945 millions of people, including almost all military personnel of the army, as well as those who were commissioned, demobilized or transferred to the rear for injuries or other reasons. Thus, millions of Soviet citizens, starting with 15, began to wear the St. George ribbon on their chests — on the medal “For the Victory over Germany.”

But even before the Great Victory, the St. George ribbon was actively used in the Red Army and in the navy. Let's start with the fact that even in the autumn of 1941, just a few months after the start of the war, it was decided to assign the most distinguished in battles, formations, and ships to the title of “Guards”. September 18 1941 “for combat exploits, organization, discipline and exemplary order” the name “Guards” was assigned to 100, 127, 153 and 161 rifle divisions, which were renamed 1, 2 th, 3 and 4 th guards rifle divisions.

By the end of World War II, 11 armies and 6 tank armies, 40 infantry, 12 tank, 9 mechanized, 14 aviation and 7 cavalry corps, 215 divisions, 18 warships and many military units of various branches of the armed forces and branches of the armed forces. Millions of Soviet servicemen served in guards units and formations, all of them also had the right to wear the guards' distinctive sign - the St. George ribbon.

By the Decree of the Presidium of the Supreme Soviet of the USSR from 8 in November 1943 “On the Establishment of the Order of Glory I, II and III Degree” a new order was established - the Order of Glory. They could be rewarded for their personal merits by servicemen — privates, sergeants and foremen, and in the Air Force — junior lieutenants. The status and color of the ribbon of the Order of Glory almost completely reproduced the famous George Cross, one of the most famous and respected awards of the Russian Empire. Only the Order of Glory had three degrees, and George had four degrees. When the question arose of creating a new Soviet order, which could be awarded to soldiers, sergeants and elders of the Red Army, it was originally planned to call him the name of Bagratio. October 2 1943, the head of the rear of the Red Army, General Khrulev, presented Stalin with four options for sketching a new order. Stalin approved the idea of ​​the artist Nikolai Moskalev that the order would be worn on the St. George ribbon, and decided to introduce three degrees of the Order of Glory. 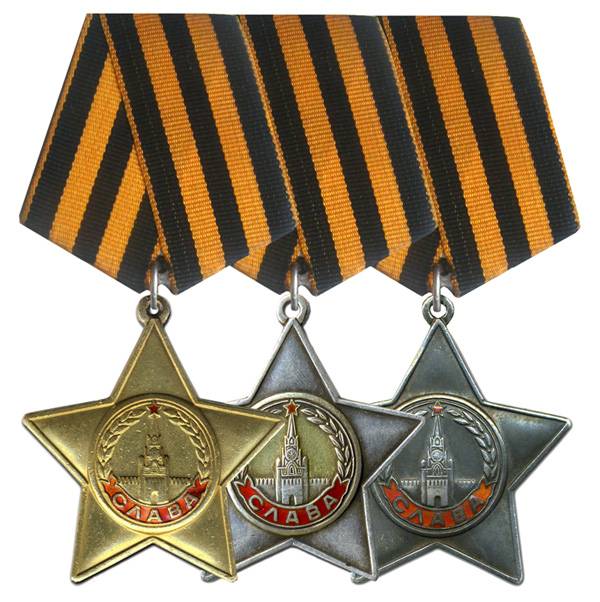 The Order of Glory was truly a soldier’s order. They were awarded ordinary "workers of war", who every day risked their lives on the battlefield, performing simple, but very complex and dangerous tasks. The gentlemen of the Order of Glory respected the command, and they, privates, sergeants and sergeants, could feel a certain superiority over the officers, because they were awarded for concrete feats, for their personal contribution to the approach of the Great Victory.

The list of feats for which the possibility of awarding the Order of Glory was provided is impressive. So, they could have been rewarded with a soldier, sergeant or foreman if he first broke into the enemy's bunker, pillbox, trench or dugout of the enemy and destroyed his garrison; personally captured the officer of the enemy forces; at night he took off an enemy guard post or watch or captured him; destroyed the enemy machine gun or mortar; from personal weapons shot down an enemy plane; destroyed the enemy warehouse; captured the enemy banner in battle; saved the banner of his unit from capture by the enemy during the battle; continued to perform combat missions while in a burning tank; under the enemy’s fire, made a passage in the enemy’s wire obstacles for his unit; assisted the wounded under enemy fire for several battles; after being wounded, after bandaging he returned to the ranks for further participation in the battles.

They gave the Order of Glory and pilots with the rank of no higher than the junior lieutenant - for the fact that the fighter pilot destroyed the enemy's fighter planes from 2 to 4 or from the 3 to 6 of the enemy bombers; Assault Aviation Pilot - for the destruction of enemy tanks from 2 to 5, or of 3 to 6 of steam locomotives, or enemy echelon, or for the destruction of at least 2 aircraft on the enemy’s airfield; Assault Aviation Pilot - Destroyed enemy aircraft in 1 or 2 air combat; bomber crew - for the destruction of bridges, echelons, warehouses, headquarters, railway stations, power plants, dams, warships, enemy boats; reconnaissance crew - for successfully completing reconnaissance of enemy positions, as a result of which valuable information was obtained.

“The Order of Glory was established only in 43 year, and did not enjoy particular popularity, even fame on the front,” said Alexander Nevzorov, a critic of the St. George ribbon, in one of his speeches. Well, of course, it is better for a venerable TV presenter to know what popularity is, but they, the heroes of the front, did not even chase after popularity. They fought, killed the enemy, died, were injured and awarded the Order of Glory. 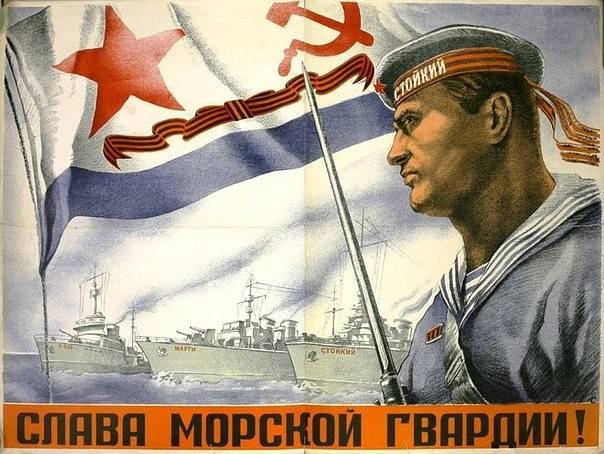 Where did the myth come from, that the St. George ribbon is almost the Vlasov symbol? Let's start with the fact that collaborators from among the Russians and other peoples of the USSR who fought on the side of the Nazis always awarded themselves with German awards themselves, as well as those specially instituted for ROA and other similar formations with the Order of Bravery and the Medal of Merit. St. George ribbons and St. George's crosses were absent in the German award system. Naturally, among the collaborators there were white emigres, including participants in the First World War and the Civil War, who could wear St. George's crosses on their uniforms, which they received while serving in the Russian Imperial Army. But this in no way means that the St. George ribbon was a regular Vlasov award or was used in other collaborationist formations. The cavaliers of St. George — the participants of the First World War — also fought in the Red Army, and there were disproportionately more of them in the RKKA than in the POA or other traitorous structures. Thus, the replicated myth of the “Vlasov St. George Ribbon” is nothing more than another attempt to blacken the history of the Great Patriotic War and the memory of Soviet citizens who fought against the Nazi invaders. 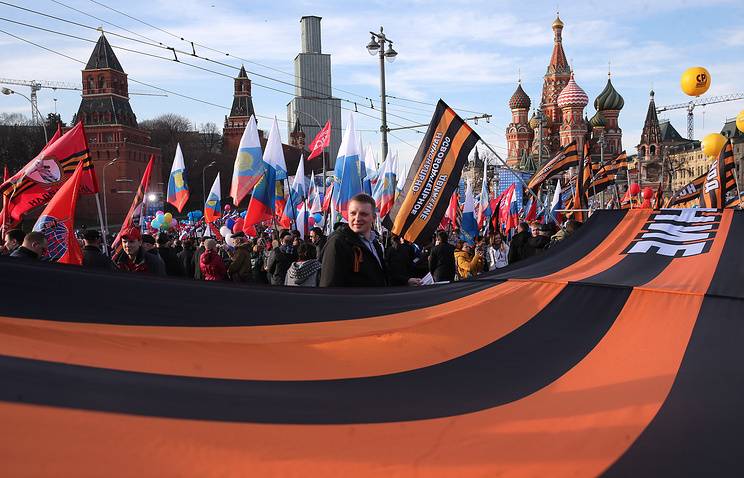 St. George's ribbon can rightfully be considered an old and very honorable symbol of Russian military glory. It is not by chance that it causes such rabies in Russophobes of all stripes. Already in the post-Soviet period, the St. George ribbon acquired new meanings. First, it became a symbol of the memory of the Great Patriotic War and tribute to her veterans. When a modern young man puts on a St. George ribbon, decorates his car with it, even at such a superficial level, he nevertheless shows respect for the memory of the heroic ancestors who defended the Soviet Union from invaders.