Why do they want to steal Victory Day from us?

12 May 2018
102
Again came the bright and sad feast of our Great Victory over the world evil of Nazism. Sometimes it seems that spring itself without this day is not spring at all, but a parody of temporary warming of the planet. Our Motherland gave millions of lives so that each new spring was truly a spring, the awakening of this very life, and not a parody.


But, alas, in my humble opinion, our Homeland is too large and rich, both culturally and financially, so as not to have its own internal parasites. Well, Russia looks too tempting, which, despite its advanced age, always seems like a young and breathing life. That is why by 9 May this most parasitic part of life is activated again. Voices written off by junk singers mouth and professional political losers, bought for the delivery of journalists and unreadable writers - parasitic life reminds of itself like the humming of mosquitoes. A small bloodsucker, it seems, and in fact malaria and fever spreads. And infects people who are starting to rot from the inside. 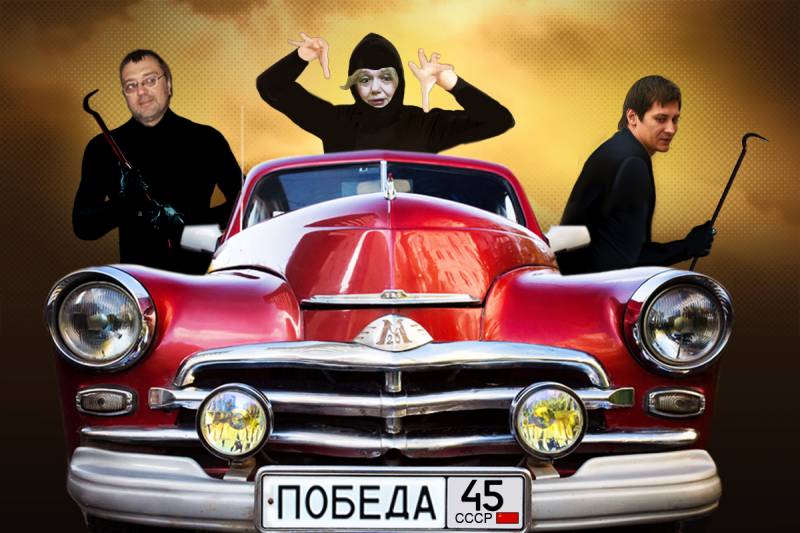 Who are these people? Yes, they are not hiding. The question is not even worth it. Leaving aside the degenerative survey regarding the surrender or non-surrender of Leningrad, the endless lament of Maxim Katz, who is famous for his evasion from serving in the Israeli army, about parades allegedly proud of the death technique, etc. etc. There are pearls and fresher.

Here, for example, is a loser politician Dima Gudkov. The only thing I remember about this character is with his desperately smiling father at the mourning Nemtsov march, the more famous Gena Gudkov. I also remembered his election campaign. So, to one of the voter's questions: “Why?” Dima first thoroughly hung, and then showed wonders of liberal competence. Gudkov replied: "Head off!"

Another inhabitant of the moral bottom. Pseudo-journalist Nikolai Khramov. It is still easier here - Vlasovite, Russophobe, Nazi and just very plump mediocrity, which still tramples the bridges of democratic Moscow. 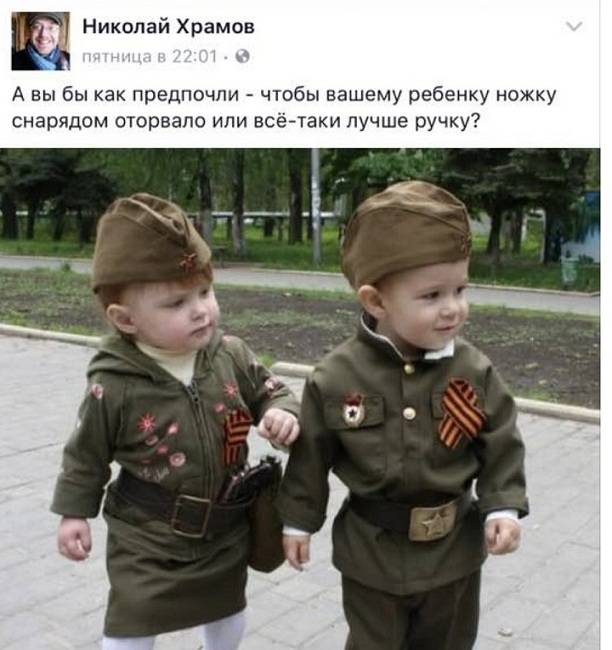 The citizen Maria Arbatova, who considered herself a writer, could not pass by the Victory Day. True, she is better known as the companion of Yeltsin’s bottle man and a supporter of “positive discrimination”, according to which the majority is driven by Mozhai, and the privileges of voting rights are granted to the minority. Maria also periodically applies to the field of protection of bluish citizens and is the face of the feminist movement that has degenerated into social insanity.

But especially the professional opinion of the singer Lebedinsky sent to the trash. His voice, like himself, can be counted among the artifacts of the "holy 90-x", which for some "strange" reason, I recall with disgust. It was the voice of Lebedinsky, who called himself a professor, and sang dirty taverns, like the underwear of a courtyard girl, songs. Now the singer with his mouth utilized during his life seems to consider himself to be a distinguished expert in all areas of life activity. And he prefers to broadcast his brilliant thoughts through the media of ancient Sumeria and the Black Sea diggers. 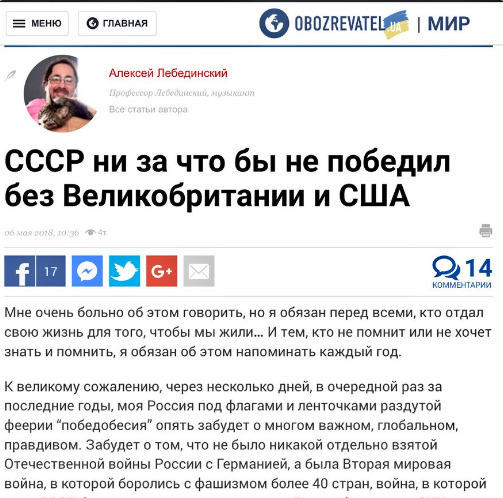 And here is a "cute" joke from Elena Lukyanova, a lawyer, seemingly a scientist, politician and public figure. In general, my "favorite" set of a man-orchestra, who never found himself in anything, but his own vanity turned into wild complexes in relation to the Motherland. Now Lenochka mostly releases hypocritical and cynical witticisms from Latvia, where the Nazis parade. She has a much more severe form of hatred for the country, because when such an infection is picked up by a woman, a person created to bring new life into the world, the disease takes on totally ugly forms. 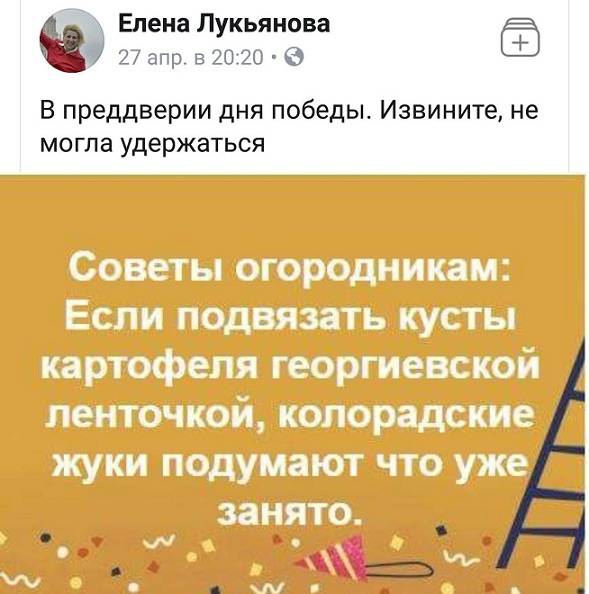 But that citizen Oleg Kashin retweeted. There are already legends about his tantrums and posturing on the Internet. And the attack on Kashin, which raises questions in the style of “was there a boy,” and did Olezhka himself try to blow him up to an epic span, which caused only angry laughter. Working for a long time in the handshaking media, he was able to bargain for the right to shit now from abroad, so to speak, being at a remote job. 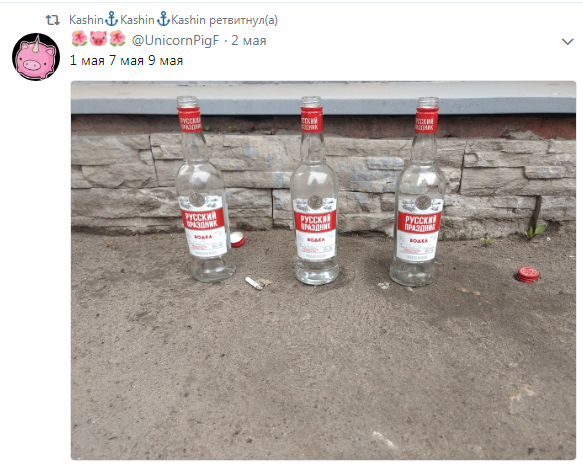 But this is so, the most famous inhabitants of the bottom, once again reminded of their existence. This, so to speak, only carriers. But the infection itself is sometimes spread without their direct presence. Illiterate bloggers, and just network dwellers also do a good job with the task of tarnishing Victory Day. Sometimes this is done even under the guise of objective criticism, but the goal is visible and obvious. 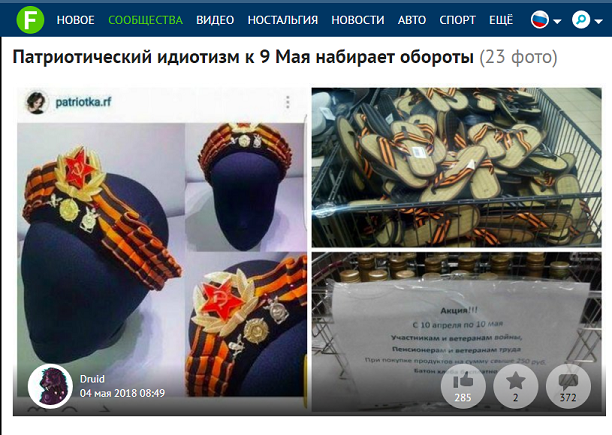 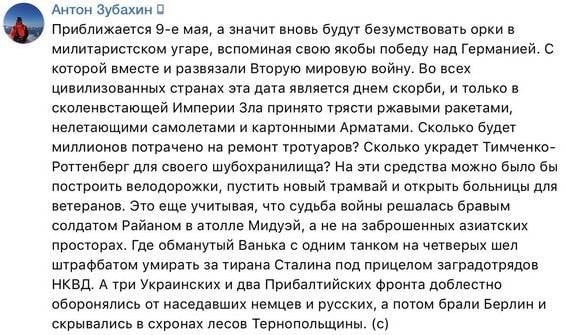 Why blacken so bright, so deserved and so sad for our country holiday? In addition to the well-known importance of rallying people on this holiday, there are far more far-reaching tasks. What is the people? How to conquer it, take possession of the subsoil, cheap and submissive labor, which will not annoy your personal views on lifestyle, world order and distribution of material wealth? And let it simply cease to be a people.

And these are not some conspiracy theories, but normal practice and very pragmatic - without wars, expenses for the maintenance of the occupying army and others. You just have to take away everything that makes people a people. Take away traditions, customs, culture. And such a significant holiday as Victory Day - God himself ordered to take away from the population with such a obstinate and incomprehensible for many desire self-identification.

And they try to take away not only Victory Day - we “hunt” mosquitoes for the occasion, and the mosquitoes themselves keep their existence constantly. The reader will forgive me that I do not go into explaining the causes of these insects, since the very consideration of the products of the vital activity of these creatures in the form of screenshots of their attempts is not easy. But from what sides these creatures are trying to get close to the living and breathing soul of the people - it’s worth describing.

There are a lot of these parties. They try to bite the culture of our people by diligently planting "modern art". Under the guise of art, a phallus will be presented, painted on the asphalt of the drawbridge, then the peasant nailing the scrotum to the pavement, or the poor, but scandalous daubing on a curved canvas is not important. It is important to first defame the pictures of socialist realism, and then you can get to the classics. In a quiet, but carefully blackened Soviet cinema. In general, nothing is left aside. 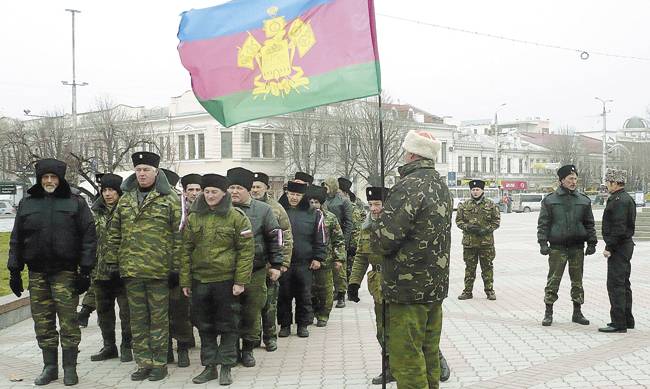 Cossacks in the Crimea, before being sent to Perekop

The folklore ensembles, reenactors, and especially the Cossacks defame. Well, who among us has not heard, and some even no-no, yes, they throw, in passing, a slimy word - “mummers”? I will not argue, there are different people, but how dexterously and thoroughly many have hammered the simplicity and irresponsibility to shame all the people who have the strength to preserve traditions and customs. And at such moments, those Cossacks were somehow forgotten, who in 1945 were parading on Red Square, shining with orders paid in blood, and not medals for a privatized journalistic pen. They forget about those Cossacks who stood on Perekop and Chongar in 2014, who in the church of Andrew the First Called Bulgarian grilled pieces of reinforcement waiting for the arrival of the Ukrainian Nazis, since weapons it was not possible to deliver to the Crimea through the crossing. 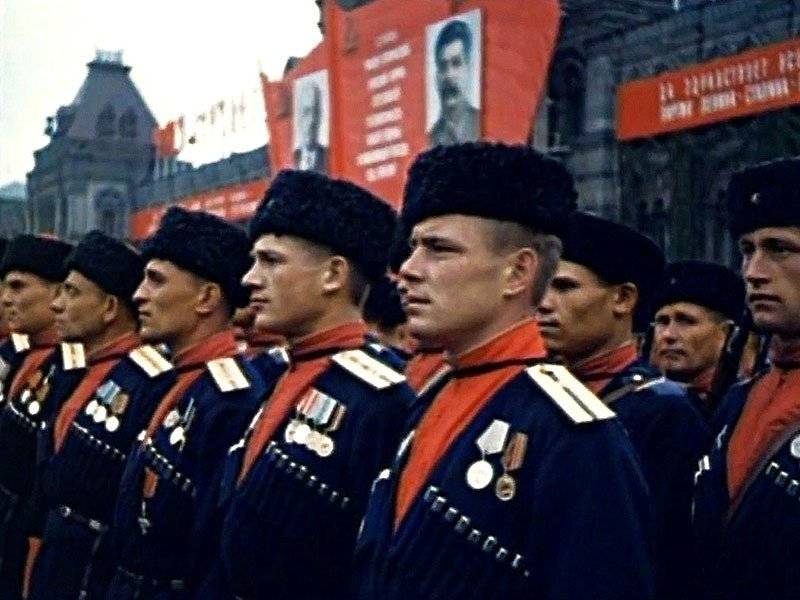 At the same time, particularly ardent liberals, using the word "mummers" everywhere, are fighting just the same in hysterical delight when they look at the costumed miniatures of their American friends for Thanksgiving. On this day, some particularly "grateful" our sworn American friends dress in the first colonists' suits and remember how their ancestors thanked the Indians, and at the same time God himself, for salvation from starvation after a harsh winter. It is problematic to talk with God about the colonist “gratitude”, but it is equally difficult to find out the opinion of the Indians on this issue. After all, the amount of gratitude was so comprehensive that it is now extremely difficult to find an Indian at all. But these little things do not interfere with the size of our demshize emotion.

The crown of this can be considered the attempts of the citizen Latynina, who accumulates fecal masses around herself, both literally and figuratively. For this citizen, even the very existence of the Cyrillic alphabet is a monstrous mistake. What is it like? 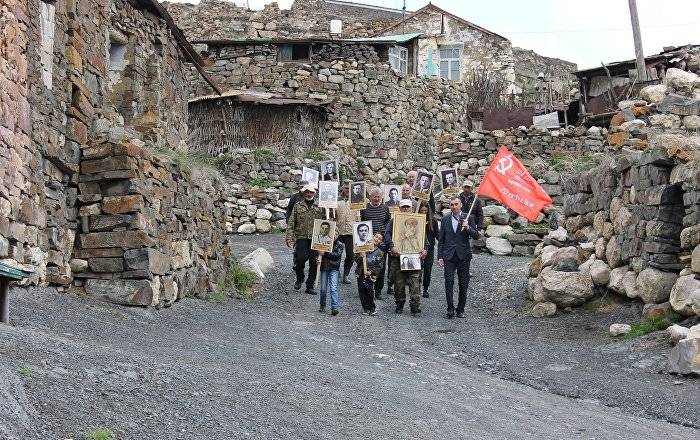 "Immortal regiment" in the highland Ossetian village of Kamunt

But in Russia they continue to write poetry, sing their songs, although not as often as they would like, to live their own traditions and holidays. And on May 9, millions go to the “Immortal Regiment” and cause further episodes of epilepsy in alien parasitic organisms that still can’t turn this country into just a territory inhabited by mankurts, living stomachs without their own national self.