Striking the Golan will seem like a prank to Israel. Due retribution is already at the gate 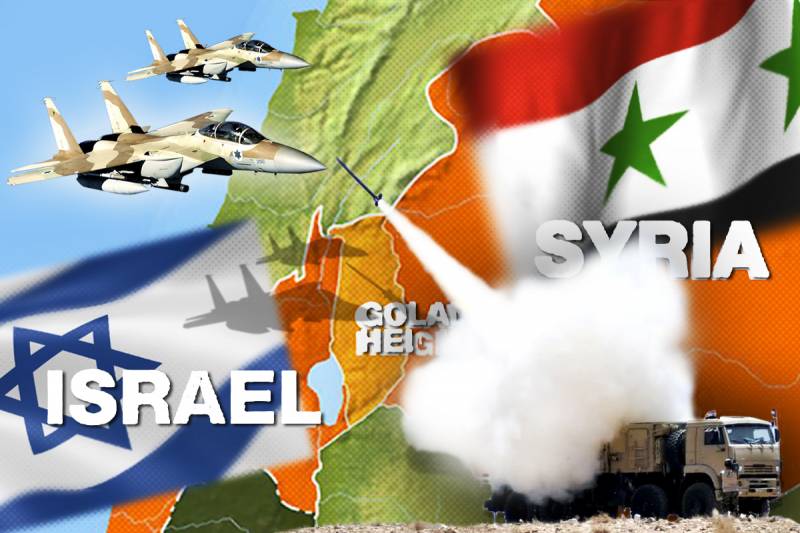 It is becoming increasingly obvious that the absolutely unpromising diplomatic fuss of the “contractors” to preserve the “nuclear deal” as the primary component of maintaining stability in the Asian region suffers a fiasco. As the events of recent days have shown, the powerful Israeli lobby in the State Department, the Senate, and the US Congress can, without any particular difficulty, reorient practically any foreign policy and operational-strategic levers used by the current administration of President Donald Trump and the White House to Tel Aviv. particular. One can trace this rather interesting intricacies on the example of Trump's unusually accelerated exit from the “nuclear deal” immediately after the visit of Israeli Defense Minister Avigdor Lieberman to the United States for talks with his American counterpart James Mattis, as well as after unannounced closed consultations of the Commander-in-Chief of the US Special Forces 4 Star. US General of the Land Forces Joseph Votel with the head of the AOI General Staff, Colonel-General Gadi Aysenkot.

But if Lieberman's working visit to a meeting with "Reservoir Dog" (the army nickname for Mattis in the ILC), US National Security Adviser John Bolton, as well as Special Representative for the Middle East Settlement Jason Greenblatt, on April 26, can be considered quite an ordinary event that fits into the framework discussing the paramount points of American-Israeli military-technical cooperation and agreeing on a single action plan at the time of ignoring the position of the IAEA and the EU regarding the "nuclear deal", the unannounced meeting between Votel and Eisenkot has a much deeper meaning, foreshadowing the imminent start of escalation from the Israeli side. At the same time, the emphasis was placed not only on the standard air strike operation of tactical fighters F-16I "Sufa" and F-15I "Ra'am" on strategically important objects of the SAA using the planning UAB GBU-39 / B "SDB-I" and winged missiles "Delilah", but also for the ground phase of the operation, in which from the 20th of April it was planned to use armored and artillery troops, including the 7th tank brigade, the 282th artillery brigade "Utzbat Golan" and the 215th regiment "Utzbat Amud Hash." As you know, the latter are armed with tracked combat vehicles-launchers M270 227 mm multiple launch rocket systems MLRS and 155 mm self-propelled artillery systems M109A5.

Planning the use of the IDF jet and artillery against the strongholds of the Al-Quds units, as well as the Syrian Arab Republic air defense systems deployed south of Damascus, covering them south of Damascus, did not come as a surprise to us, since the Hotel and Eisencote who conducted the April 24 negotiations are generals- “ land satellite ", specializing in the coordination of high-intensity ground operations. For example, in the second year of the military career (in October 1980 of the year), Joseph Votel became the platoon commander of the 3 division of the US Army in Germany, and in January 2007 was already the chief of staff of the US armed forces in Afghanistan, at that time, having participated in the “Just Cause” operations (US invasion of Panama), “Iraqi Freedom”, etc. Gadi Aysenkot also began his service in the 82 year, in the 1978 Battalion of the 51 Infantry Brigade of the Golani, which he headed in the 1 year. As commander of a rifle company, he passed the “First Lebanese War” (1997), and after the “Second Lebanon War” he was appointed commander of the Northern Military District.

Our assumptions were confirmed in the evening of May 8, about a day before the massive exchange of missile attacks between the Israeli armed forces on the one hand, and also the Iranian units of al-Quds and the SAA in Damascus province on the other. News the block of the online combat map syria.liveuamap.com with a link to the Twitter page of the analyst @ michaelh992 provided us with information about the arrival of MLRS MLRS combat vehicles in the Golan Heights, which are armed with one of the above artillery units. Obviously, the 10 land-to-ground missiles mentioned in the media used by the Israeli army during the night strike on May 10 are precisely the 227 mm unguided missiles of the M26A1 / A2 family, or guided missiles of the M30 / XM G / type GUMLRS with a range of up to 70 and 95 km, respectively. As for the IDF barrel artillery, it was used to shell Syrian government forces in the front-line city of Khan Arnabah. 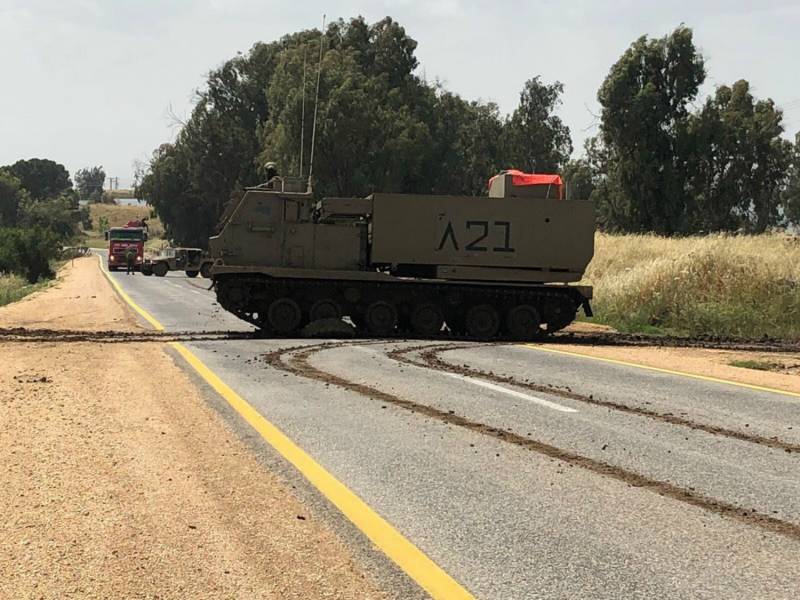 BM M270 MLRS, transferred to the Golan Heights on May 8

The Israeli side claims that the bombing and artillery attacks were carried out on positions of Iranian troops in response to earlier rocket attacks on Israeli strongholds in the Golan Heights. But if you delve into the situation, it becomes clear that a preemptive strike from the Iranian forces is 100% justified. Let's remember that countless number of massive missileaviation attacks by Hel Haavir on the SAA and Al-Quds and IRGC units, which were carried out starting on February 10, the day of the interception of the Israeli F-16I by the Syrian air defense forces. All of them remained unpunished, despite the fact that neither the government troops of the SAR, nor the Iranian units at all planned to attack the Golan Heights and other territories of the Jewish state; they were immersed in the task of cleaning up the terrorist "cauldrons" in Eastern Ghouta and Duma. But now the hour of harsh retribution has come. Moreover, both the United States and Israel signed up for such an excellent opportunity, planning an insidious action with the withdrawal from the nuclear agreement with Tehran to start a large Western Asian war.

Today’s strikes by the Israeli Air Force and artillery units on the front-line sections of the so-called “southern de-escalation zone”, as well as the transfer of mechanized IDF units to the Golan may indicate only one thing — an attempt to weaken the advanced parts of the regular Syrian army to support the 15 — 17 offensive thous. Free Syrian Army ", distributed in the directions of Chadera, Kafr Shams, Dar'a, Khalkhalakh air base and Essaouida. If these strikes are supported by new trains of Tomahawks by the AUG headed by the nuclear aircraft carrier Harry Truman, the likelihood scenario of the loss of all territories in the south-west of the republic, including the capital Damascus, increases significantly. To prevent such a development of events, there is already an urgent need to deploy C-300PMU-2 “Favorit” air defense systems in the 6 divisions, at a minimum. In the meantime, the Americans behave with restraint, and the Syrian air defense, replete with "armor" and "Bukami", independently copes with the reflection of the attacks of the EHF of the Israeli Air Force (at least with a factor around 0,5).

Meanwhile, the coming strikes of the Israeli Armed Forces can be even more powerful, with the prevailing use of MLRS multiple launch rocket systems, where the Buk-M2 and Cube SAM systems are unlikely to demonstrate proper effectiveness, and therefore it can be stated that it is necessary to deploy in the southern surroundings of Damascus even more "Armor-C1", capable of intercepting even 122-mm NURSy systems BM-21 "Grad". As for the joint Iranian-Syrian response to the regular aggression by the Israeli army, occasionally sending new launchers with operational-tactical BR "Fateh-110 / 316", as well as "Hatf-II" to the Syrian theater of operations, it is possible drawing Israel into a real war of attrition of high-precision arsenals weaponspresented by the inconspicuous UAB "Spice-250", "Small Diametr Bomb", KR "Delila", tactical missiles "Popeye-II", etc.

Naturally, all this will be possible only in the case of an exceptionally well-built, layered missile defense system based on the "Three Hundred" and "Armor". The next air operations Hel Haavir in the southern part of the airspace of the Syrian Arab Republic can be expected in the next few days, since during the day and evening of 10 in May west of the air borders of Lebanon, the Israeli G3 "Eitam" CAEW and one American RC-550V reconnoitered.

Ctrl Enter
Noticed oshЫbku Highlight text and press. Ctrl + Enter
We are
Situational analysis of the death of the MH17 flight (Malaysian Boeing 777), made on the basis of engineering analysis from 15.08.2014Syria: Americans scare themselves, and Asma Asad buys chairs
Military Reviewin Yandex News
Military Reviewin Google News
368 comments
Information
Dear reader, to leave comments on the publication, you must sign in.