Trump will bring the DPRK to the "real world"

11 May 2018
14
Trump is optimistic about the upcoming talks with North Korean leader Trump. 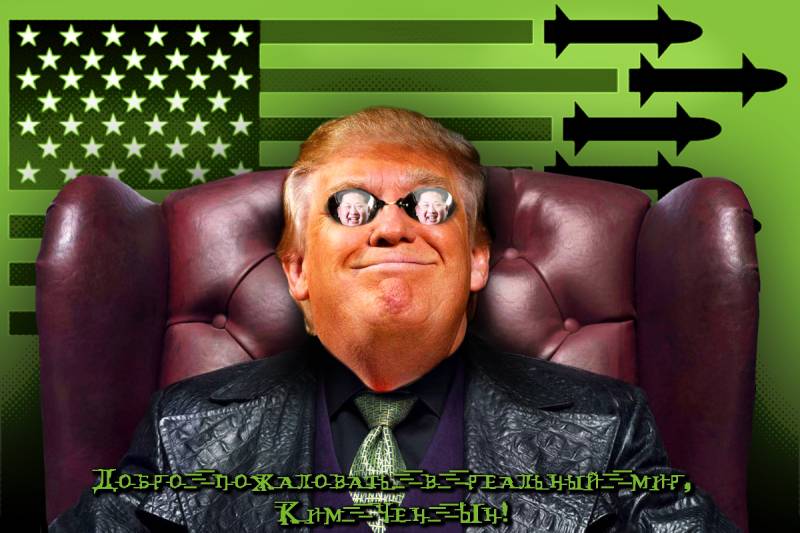 “I think it will be a very big success. So far have not gone, never had such a relationship, “- cites CNN Trump's words. He noted that Kim Jong-un wants to return his country to the "real world".

Perhaps the enthusiasm of the American president is due to the fact that previously Trump met a plane with three US citizens who were released from prison in the DPRK.

According to American sources, the meeting of US President Donald Trump and North Korean leader Kim Jong-un is scheduled for early June and will be held in Singapore.

The TV channel message was confirmed by the Associated Press. With reference to a source in the White House, it also calls Singapore as the most suitable meeting place for the two leaders.

However, trump's enthusiasm may not be very reasonable.

Recall that the main thing that Washington intends to achieve from Pyongyang today is the denuclearization of the Korean Peninsula. More specifically, the rejection of the nuclear missile shield created by the DPRK with such difficulty and tension of all the forces of the nation.

And Trump hopes to achieve this from his counterpart against the backdrop of the scandalous unilateral US withdrawal from the Tehran’s Joint Comprehensive Action Plan (DFID) on Tehran’s nuclear program, not to mention anything that Iran has not provoked.

Recall, 8 May, the owner of the White House announced its withdrawal from the nuclear deal. He linked this decision to the fact that the 2015 agreement of the year was “contrived”, and the promises made by Iran were “false”. “This agreement is in the interests of only one country, and it was not necessary to conclude it,” said Trump.

The President of the United States, without arguing anything about his accusations, said that the SAPA allowed Iran to continue to enrich uranium and "ultimately achieve a nuclear breakthrough."

Later, the White House made public a list of requirements for Tehran, most of which are in no way connected with the "atomic problem." For example, Washington demands to abandon the development of intercontinental ballistic missiles, stop supporting the Hezbollah, Hamas, Taliban and Al-Qaida groups (the last two organizations are banned in Russia), abandon the publicly declared goal of destroying Israel, ending the conflict Yemen, stopping cyber attacks against the United States and its allies.

It should be noted that both Al-Qaida and the Taliban, organizations created with the participation of the US special services, are hostile to Iran, and Tehran’s accusations of supporting them are ridiculous. There is also no evidence of Iranian cyber attacks against anyone.

In other words, Trump’s move, which is a malicious violation of international law and Security Council resolution 2231, is a compelling demonstration of how the United States is fulfilling its obligations and complying with its guarantees.

There is no doubt that this is yet another confirmation of Washington’s “agreement capacity” appreciated in North Korea.

Recall that the decision to create a nuclear shield of the DPRK was adopted by Kim Il Sung after the Caribbean crisis. The fact that under US pressure, Khrushchev had decided to refuse to deploy Soviet missiles in Cuba, led the North Korean leader to the conviction that it was impossible to delegate to external forces. And only the ability of its own armed forces to inflict unacceptable damage on any aggressor can guarantee peace and independence of the country.

All subsequent events have shown the foresight of the first leader of North Korea and the correctness of his assessment.

As we see, only the presence of nuclear weapons the DPRK and the adamant determination of its leadership to defend its sovereignty at any cost stopped the seemingly inevitable war that the US was ready to unleash against North Korea.

The question of whether Washington would have gone to negotiate with Pyongyang if it did not have nuclear weapons, as we understand it, is purely rhetorical.

However, like the one, whether the United States will faithfully implement the agreements that can be reached on them.

Waiver of the FACD convinces Pyongyang even more that Washington will not fulfill any of its obligations. And there is no doubt that in the upcoming negotiations, if they take place, Kim Jin-un will proceed from this. And also from the fact that the national nuclear missile program is not only the main asset in relations with the United States, but also the only reliable guarantee of security and independence of the country.

One can hardly hope with such initial data that the upcoming negotiations will be productive ...

Ctrl Enter
Noticed oshЫbku Highlight text and press. Ctrl + Enter
We are
Lion City - Half a Century of Independence of SingaporeSituational analysis of the death of the MH17 flight (Malaysian Boeing 777), made on the basis of engineering analysis from 15.08.2014
Military Reviewin Yandex News
Military Reviewin Google News
14 comments
Information
Dear reader, to leave comments on the publication, you must sign in.