10 May 2018
160
Russian economist, journalist and politician, host of a number of television and radio programs, Doctor of Economics Mikhail Delyagin in his website published an article in which “one of the most respected bloggers of Runet burkina-new (it is worth remembering that“ Burkina Faso ”is translated as“ the country of honest people ”)” calculates the true, in his opinion, number of Soviet citizens who died during the years of the Great Patriotic of war.

The blogger writes: “The last figure in the 41 million 979, sounded in the State Duma, is terrified to an untrained person, and to the anti-Soviets a great joy, because they receive another confirmation of the incompetence of the“ cannibalistic Stalinist regime ”. But if you turn on the brain and rely on the basic numbers of the numbers of the prewar and post-war population of the USSR, you can easily understand that these numbers are a giant lie. Now I will illustrate it.

And so I took the official figures of the population of the USSR and built this schedule: 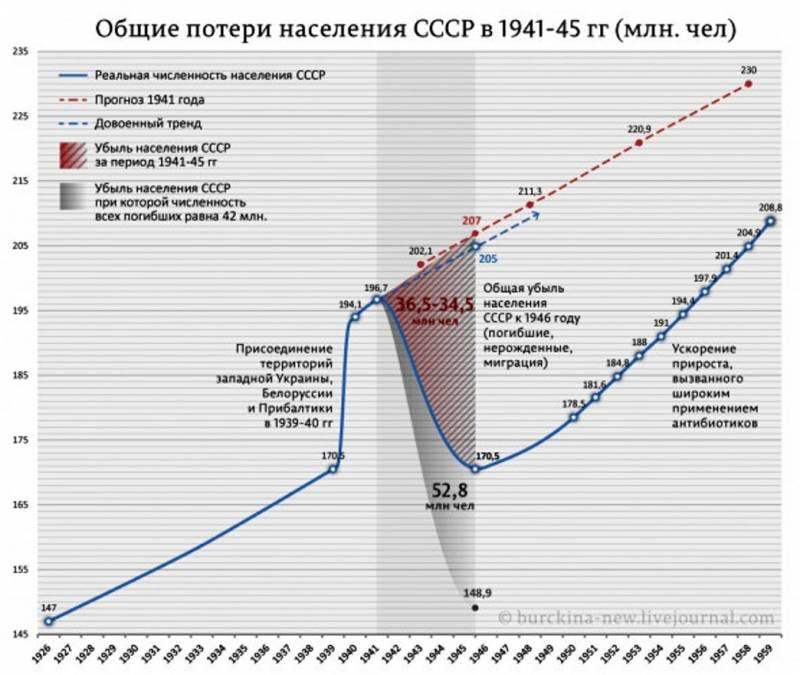 Based on this figure, it is now possible to calculate the irretrievable losses of military and civilians during the war years. To do this, it suffices to deduct from the total loss those who migrated (did not return from captivity and forced labor in Germany). According to Krivosheev, those were 180 thousand and 450 thousand people. Total 0,63 million

It remains to find out the natural increase in the population, which did not take place during the war due to low birth rates and increased mortality. To do this, I used the reference book of the Central Statistical Bureau of the USSR "The number, composition and movement of the population of the USSR" for 1965 a year. There, on page 215, we learn that before the war, the annual increase in the population of the USSR was from 3 to 3,3 million. For 5 years in the minimum and maximum scenario, this will give us the number in 15 and 16,5 million people. The smaller figure is used for the maximum loss scenario, and the larger one for the minimum.

As a result, we obtain the result that I depicted in the diagram: 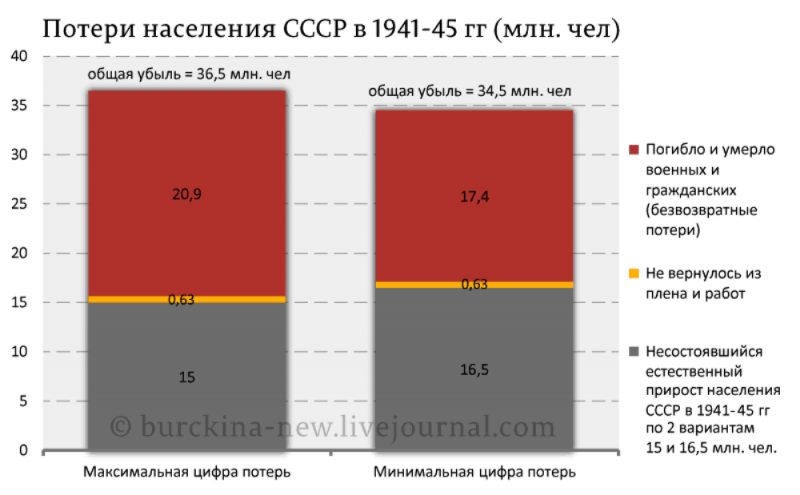 The maximum number - 20,9 million dead and killed during the war. This figure is very close to the official loss figure of the Brezhnev era, and the minimum figure in 17,4 million is close to the figure of Viktor Zemskov in 16 million people.

I dare to suggest that with my reasoning I proved the complete delusionalness of the new figure in 42 million people. By the way, as well as the delusional restructuring of the loss figure in 26,7 million, invented by order of Alexander Yakovlev by the team of Andreev, Darsky and Kharkova, known for sucking 7 million from the finger of ostensibly motivated by Stalin in 1932-33. ”

Mikhail Delyagin himself noted:
It is gratifying to understand that Russian society is gradually recovering from the monstrous perestroika self-spitting syndrome. And it is gratifying to see that the Soviet government was honest and tried to tell the truth, even in the most painful and terrible issues, which is confirmed by modern, unbiased scientific research.