America freed from the Iranian yoke

10 May 2018
26
Mr. Trump freed the United States from the Iranian yoke. It sounds a bit strange, but apparently, this is the way to interpret President Trump’s statement, saying that America will not be “hostage to nuclear blackmail”. Announcing the US withdrawal from the Iranian nuclear deal and the upcoming resumption of anti-Iran sanctions, Trump made a gift ... to Russia. 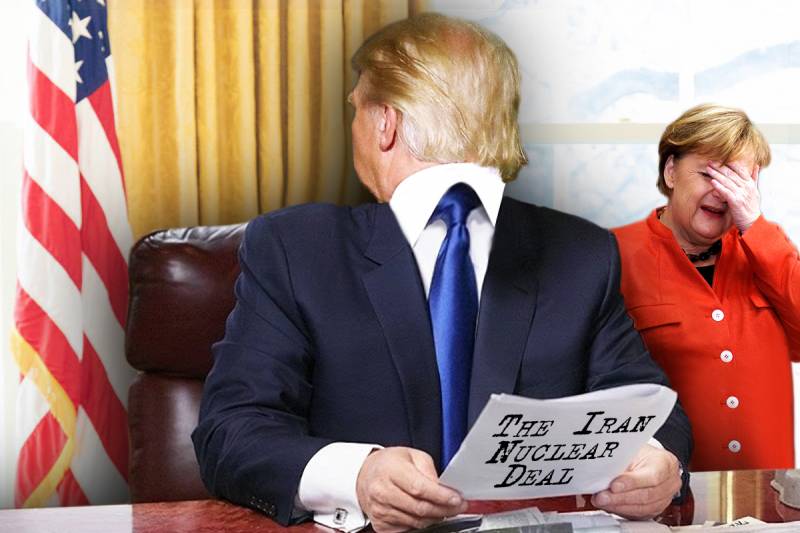 Donald Trump announced the withdrawal of the United States from the agreement on the nuclear program of the Islamic Republic of Iran. "I now announce," he quotes. Interfax- that the United States will withdraw from the agreement on the Iranian nuclear program. After a few moments, I will sign a presidential memorandum to begin the process of resuming the US sanctions related to the atom against the Iranian regime. ” This was said during a speech at the White House on Tuesday.

The president did not stop at words and immediately signed a memorandum.

Now Iran has the highest level of sanctions. All countries that would even think of helping Tehran in creating nuclear weapons. “America will not be held hostage to nuclear blackmail,” Mr. Trump explained his position.

And backed up the statement "accurate evidence." According to him, Washington has evidence of Iran’s continued development of nuclear weapons, which is a violation of the Joint Comprehensive Action Plan. “Today, we have accurate evidence that Iran’s promises were a lie,” the president said.

Accurate evidence is documents published by Israel. Trump said: “Last week, the Israeli government released intelligence documents ... that demonstrate historical the desire of the Iranian regime [to have] nuclear weapons. " According to the American leader, the nuclear deal "allowed Iran to maintain access to uranium and over time [would allow] to develop nuclear weapons."

Speaking at the White House, Mr. Trump called the nuclear deal "decaying and rotten." The deal, in his opinion, was unable to prevent the appearance of nuclear weapons in Tehran in the near future. Therefore, Trump promised to restore tough sanctions affecting Iran’s nuclear activities, notes "BBC".

The Office of Foreign Assets Control (OFAC), in turn, reported that it is taking immediate steps to implement the decision of the US President. Businesses currently cooperating with Iran will receive from 90 to 180 days to terminate the relevant business relationship. At the end of this period, sanctions will be resumed.

The decision of the US President caused a stormy political protest in Iran.

The day after Trump's statement Iranian parliamentarians publicly burned American flag. Along with the flag lighters, they set fire to some more paper, allegedly a printout of a nuclear deal.

However, the Iranian authorities are quite careful.

President Hassan Rouhani announced on TV that gave instructions their diplomats to negotiate with France, Germany, Britain, Russia, China and evaluate the possibilities of maintaining a nuclear treaty.

“If by the end of these negotiations we come to the conclusion that what the people of Iran demanded is achievable, the nuclear agreement will remain in force, despite the wishes of the United States and the Zionist regime, as well as Trump’s rude words.”

However, in the event that the interests of Iran will not be respected, Rouhani promised to appeal to the people, and then report on the decisions.

In Russia, the decision of the President of the United States was commented by experts.

“Europe hopes to convince Trump to change the decision on Iran. But Trump will not cancel his decision, but will suggest that the Europeans change their own position, ”wrote Alexey Pushkov, chairman of the Federation Council’s information policy committee, author of the PostScript analytical program. "Twitter".

The United States acts as a provocateur, since Iran is given freedom of action, said Dmitry Novikov, deputy chairman of the Duma’s international affairs committee. “If the treaty is destroyed, then, of course, Iran will theoretically have freedom of action, including the possibility of developing nuclear weapons and implementing relevant programs. Therefore, the United States in this case serves as provocateurs ", - quotes him Newsru.com.

At the state level Russia condemned the decision of the United States and stated that she will continue to abide by the earlier agreement. The Russian Foreign Ministry noted that the agreement fulfilled its functions, and its gap indicates the incapacity of the US administration. Donald Trump, in deciding to quit, pursued "narrow-minded" interests.

Not only Russia was against it. Great Britain, Germany and France also called on the parties to the agreement to continue to implement it.

Such a cautious reaction of European states confused the United States.

Opinions of different "parties" about Trump's decision are collected and continue to be collected on the channel’s website. CNN. There are a lot of opinions and comments there, we will give only the main ones.

US Treasury Secretary Steve Mnuchin said that Britain, France and Germany support the US goals of the United States on a deal with Iran. At the same time, Mr. Mnuchin admitted that the United States "has somewhat different views on how to achieve this." According to him, the president has clearly expressed his attitude towards the former nuclear deal, and now there is “hard work” with American allies.

What kind of "hard work", he did not specify. However, it is clear, we note that the allies this time with the United States do not agree in principle.

In the United States, too, there is real chaos over the abolition of the nuclear deal and the continuation of the policy of sanctions.

“This will weaken our authority and global leadership, which will allow Iran to gain international sympathy, while not doing anything to reduce its [Iran] harmful activities in the Middle East,” Mr. Biden said.

The outcome of Trump's decision will be the return of Iran "to the path to obtaining nuclear weapons." And a clear diplomatic exit will be impossible. There will be a threat of war with Iran.

Many US lawmakers are also unhappy with Trump’s decision.

Senator Mark Warner noted that Trump’s move drives a “wedge between us and our allies.” Senator Tim Kane thinks the same way.

Senator Bob Menendez: "This is a huge mistake ..."

Rep. Mike Turner: "Outside of the evidence that Iran is violating the agreement, a complete rejection of this deal is wrong."

Senator Bob Corker expressed disappointment that the White House was unable to reach an agreement with the American allies.

Former US President Barack Obama issued a statement in which he called on Trump to abandon the “erroneous” decision on the deal. “I believe that the decision to put JCPOA at risk without Iran’s violation of the deal is a serious mistake,” he wrote. Outside the agreement, the United States may end up facing the war in the Middle East.

Turkish President R. T. Erdogan said that as a result of the US refusal to bargain with Iran, new crises should be feared in the region. “We don’t need new crises in the region,” Ernogan told CNN, adding that Trump’s decision will affect not only the Middle East, but the whole world.

Erdogan also said that Trump had to abide by the agreement that the previous administration signed.

But Saudi Arabia Trump's decision is fully supported. The people of the kingdom said they “support and welcome” President Trump’s decision.

Well, Iranian President Hassan Rouhani, meanwhile, said that he ordered the organization of the country's “atomic industry” to fully prepare for taking measures, if any, to launch “industrial enrichment without restrictions”.

It is curious that some regional foreign experts find the decision of the United States beneficial for Russia.

For example, Turkish expert in the world economy Taner Beksoy said "Free Press"that the decision of the United States can really be profitable for Moscow.

“... Of course, it was impossible to guarantee that the United States would most likely refuse the deal, but still the market reacted accordingly. The share of Iran is not so great, but tangible - in connection with this decision by the United States, the total supply could be reduced by two million barrels per day. In any case, it will cause a sharp rise in oil prices. The probability is high that the price will reach 95 — 100 dollars per barrel. It is obvious that large exporters, including Russia, can benefit from such a decision. Its economy is going through hard times due to a sharp decline in cooperation with Europe, the United States and other countries. At the same time, expenses are rising, if we consider the military operation in Syria, ambitious construction projects, and so on. ”

What can the world come to as a result of the unilateral decision of President Trump?

1. If the agreement is fully rejected by the United States and its European allies and “re-activates” powerful sanctions, Iran will indeed do what Mr. Rouhani fears: it will begin “industrial enrichment without restrictions”. In the future, all conditions will be created for the war, in which, in one way or another, the United States and Israel are likely to participate.

2. The one-sided withdrawal of the United States from the deal is a fact that demonstrates another failure of international law: the leading world power in the eyes of the whole world easily spits on its own international obligations. Speak, liberal democracy, desire for peace and partnership? Not at all like.

3. Cancellation of the agreement will bring some benefit to Russia: first, world oil prices may rise; secondly, Iran will have to move even closer to Russia. On the other hand, such a rapprochement is unlikely to be enjoyed by Israel, also a partner of Russia.

4. Trump's decision will adversely affect the business and revenues of many companies that began to work with Iran. For those who built their strategy on future cooperation, this is also bad news.

5. This is bad for Iran itself. President Rouhani was counting on attracting large foreign investments into the country and boosting the economy that had previously been squeezed by sanctions. Now neither rise nor investment he can not see.

6. In the worst scenario, a radical political line will triumph in Iran, and the Middle East will plunge into the abyss of a new war. At a minimum, this means an escalation of conflicts between Iran and regional states that are opposed to it. Especially Israel should be highlighted here, whose Prime Minister Benjamin Netanyahu warmly welcomed Trump’s decision a few minutes after its announcement. The latter is not surprising: after all, it was Israeli documents that became the “evidence” for the White House. Thus, the new anti-Iranian front is in some way Netanyahu’s merit.

And the last. What threatens Iran with sanctions?

It is intended to prohibit the Iranian government from acquiring US dollars, to limit major deals for buying and selling rial, to limit Iran’s international trade in gold and precious metals, to ban supplies to Iran of graphite, aluminum, steel and software for the industry.

The sanctions will affect the automotive industry of Iran, the importation of Iranian carpets into the United States, agricultural products, activities related to the export and re-export of passenger planes to Iran. Other sanctions will hit Iranian ports, shipping and shipbuilding.

And, of course, the ban on trade in oil and oil products will return.

In essence, it is a blockade.
The burning of the deputies IRI American flag

Ctrl Enter
Noticed oshЫbku Highlight text and press. Ctrl + Enter
We are
Overseas ally? Donald Trump - US Presidential CandidateSituational analysis of the death of the MH17 flight (Malaysian Boeing 777), made on the basis of engineering analysis from 15.08.2014
Military Reviewin Yandex News
Military Reviewin Google News
26 comments
Information
Dear reader, to leave comments on the publication, you must sign in.