Victory Day in Estonia. Bronze soldier in Tallinn is buried in flowers

10 May 2018
39
On May 9, in Tallinn, to the monument "Bronze Soldier" in the morning they started to carry flowers, the portal reports DELFI. 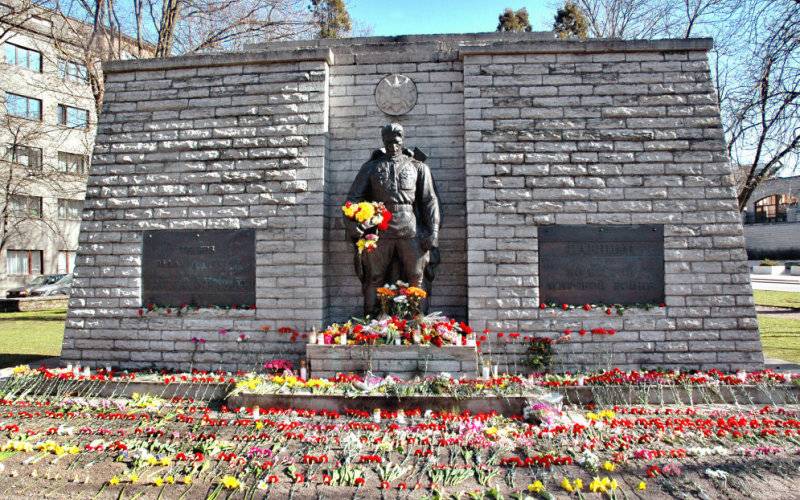 By tradition, the monument became the center where people come to honor the memory of the fallen. 9 may be a working day in Estonia, so wreaths and flowers here began to be laid the day before. On Tuesday, the wreath “From the people of Estonia” was also laid here by the military chaplains of the Estonian Defense Forces.

“By mid-Wednesday, the monument was already buried in flowers. A youth guard of honor in the form of soldiers of the winning army was lined up at the monument. A delegation of the Russian embassy headed by Ambassador Alexander Petrov, veterans and representatives of public organizations, Russian compatriots, and young people came to lay wreaths. Many have St. George ribbons on their chests, ”the report says.

In the evening, the “Immortal Regiment” marched in Tallinn. Two years ago, 600-800 people took part in the march, but this year there were much more participants - about 3000 people.

Recall that the monument, which in Estonia was named the "Bronze Soldier", was previously transferred to a cemetery from the central part of Tallinn. As planned by the authorities, they should have forgotten about him, but, as practice shows, neither the monument itself, nor the feat of the Soviet soldier has been forgotten.

Ctrl Enter
Noticed oshЫbku Highlight text and press. Ctrl + Enter
We are
MEP: I'm not sure that through 5 years Ukraine will remain in its current bordersIn New York, St. George ribbons were presented to everyone
Military Reviewin Yandex News
Military Reviewin Google News
39 comments
Information
Dear reader, to leave comments on the publication, you must sign in.