10 May 2018
32
Vasily Danilovich Sokolovsky is a clear example of how the talent of a military theoretician and the talent of practical implementation of their ideas in practice, excellent organizational skills could fit in one person. During the Great Patriotic War, Vasily Sokolovsky took part in a large number of operations, led several fronts, he is rightfully one of the most famous Soviet generals and marshals - commanders of Victory. He was the author of the militaryhistorical and military theoretical works, including "Military Strategy" and "The Defeat of the German-Fascist Troops near Moscow." Vasily Danilovich passed away exactly 50 years ago - on May 10, 1968.


Vasily Danilovich Sokolovsky was born on July 9 of the year 1897 in the small village of Kozliki of the Belostok district of the Grodno province, currently in Poland. The future marshal was born in an ordinary peasant family. Then nothing suggested that he would connect his life with the army. Vasily Sokolovsky wanted and could become a teacher. After graduating from a three-year Zemstvo school, he was happy to teach village children himself. And in 1914, at 17, I entered the Nevelskoy Teachers' Seminary, which was intended to train elementary school teachers, earning excellent grades in the entrance examinations for the right to a scholarship. At the end of the seminary in 1917, he was ready to teach, but life decided otherwise.

Future 50 years of his life, he gave the army, passing a very difficult, but respectable way from a simple Red Army man to a marshal. Choosing the path of professional military, he passed it with honor, becoming an example to follow for many Soviet officers. For Vasily Sokolovsky, the defense of the Fatherland has become not just a profession, but the cause and meaning of his life.

Vasily Danilovich Sokolovsky joined the ranks of the Red Army in February 1918. In the same year he graduated from 1-e Moscow military instructor courses. He took an active part in the Civil War, fought on three fronts. On the Eastern Front, he commanded the first company, then headed the battalion headquarters, was an assistant commander and commander of the regiment. From June 1918 of the year - senior assistant to the chief of staff of the rifle division, commander of the brigade of the 39 th rifle division on the southern front, from June 1920 of the year - head of the headquarters of the 32 th rifle division of the Caucasian Front. In 1921, literally in between fights, he graduated from the Red Army Military Academy in the first recruitment of its students. After graduating from the Academy, he was appointed Assistant Chief of the Operational Directorate of the Turkestan Front, then commanded a group of troops in the Fergana and Samarkand regions. He took an active part in the fight against Basmachis. 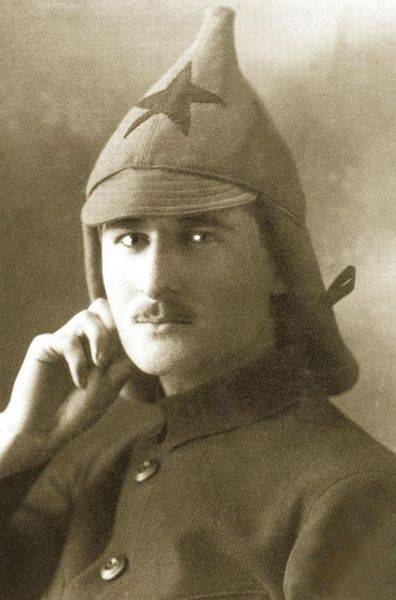 After the end of the Civil War, Sokolovsky remained in the army and made an excellent career. From October 1924, he was Chief of Staff of the 14 Infantry Division of the Moscow Military District. From October 1926 of the year - Chief of Staff of the 9 Infantry Corps of the North Caucasus Military District. In 1928, he successfully graduated from the Higher Academic Courses at the Military Academy of the Red Army named after MV Frunze, after which he headed the headquarters of the 5 rifle corps of the Belarusian Military District. In July, 1930 was appointed commander of the 43 Infantry Division in the same district.

In January, 1935, Vasily Sokolovsky was transferred to the deputy head of the Volga Military District, and in May he was appointed Chief of Staff of the Urals Military District. In November of the same year, Sokolovsky was given the military rank of division commander. Since April, 1938 was the chief of staff of the Moscow Military District, in January of the following year, he became a bomber, and in June 1940 of the year - lieutenant-general. In February, 1941 was appointed to the position of Deputy Chief of the General Staff for organizational and mobilization issues.

The knowledge gained during his studies, and the actual combat experience of the Civil War allowed Sokolovsky to become at first noticeable, and then a great staff officer, sometimes even called the genius of staff art. He consistently went through all staff positions - in the regiments, divisions, corps, districts - and all several times. Led the headquarters of two divisions, two corps, three military districts. In this case, his staff experience combined with the commander. At various times, he commanded three divisions (the 2 th rifle division of the Turkestan Front, the 14 th rifle division of the Moscow Military District, the 43 th rifle division of the Belarusian Military District). Moreover, all of the listed compounds under his command necessarily became exemplary. 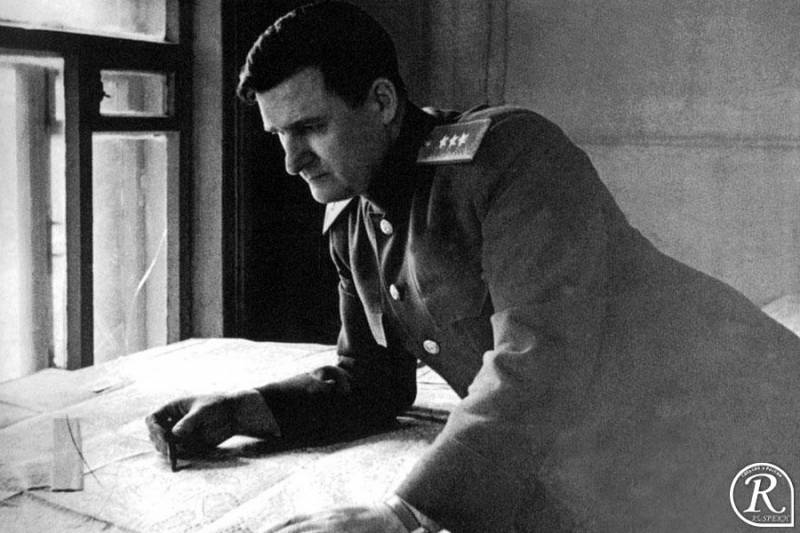 Already in July, 1941, Lieutenant-General Sokolovsky was appointed chief of staff of the Western Front, he was entrusted with planning operations in one of the most crucial sections of the ensuing battles with the Nazis. Vasily Danilovich stayed at this position with small interruptions until February of the 1943 year. The headquarters of the front under his leadership during the Smolensk battle and the Moscow battle, despite the mistakes and miscalculations in the work, was able to organize reconnaissance, organize large-scale engineering and construction work on the advanced lines and in the depth of the defense. The headquarters of the Western Front took an active part in the planning, preparation and conduct of the Moscow offensive operation of the Soviet troops in the winter of 1941-42, as well as the Rzhev-Vyazma operation 1942 of the year. In June 1942, Vasily Sokolovsky was promoted to the rank of colonel general.

From February 1943, Sokolovsky was appointed commander of the Western Fronts, whose troops, in close cooperation with other fronts, conducted the Rzhev-Vyazemsky, Oryol and Smolensk operations of 1943, in August 1943 he was given the next military rank - Army General. At the same time, he led the front a little over a year, for the failures in Orsha and Vitebsk offensive operations in April 1944, Sokolovsky was removed from his post as commander of the front and transferred by the chief of staff of the 1 of the Ukrainian Front. Since April, 1945 has been the Deputy Commander of the 1 Belorussian Front. Being in these positions, the commander made a great contribution to the development, preparation and implementation of the Lviv-Sandamir, Vistula-Oder and Berlin offensive operations of the Soviet troops.

The main milestones in the military fate of Vasily Sokolovsky were associated with the names of two famous marshals - Zhukov and Konev, and the main successes of the Great Patriotic War were the victory near Moscow and the capture of Berlin. His fate was closely intertwined with the fate of the commander of the first magnitude Georgy Zhukov. At one time, he also received the Western Front from Zhukov. And in March, 1946, after the end of the war, it was Georgiy Konstantinovich who blessed Sokolovsky for the post of commander-in-chief of the Group of Soviet Occupation Forces in Germany. The military fate of Sokolovsky was inseparable from Marshal Ivan Stepanovich Konev - on joint work on the Western and 1-th Ukrainian fronts. Both marshals knew very well the capabilities of Vasily Danilovich, valued his work and noted the awards of his chief of staff. Among all the Soviet marshals, only Sokolovsky was awarded three orders of Suvorov I degree and three orders of Kutuzov I degree - special awards for the generals of his level. 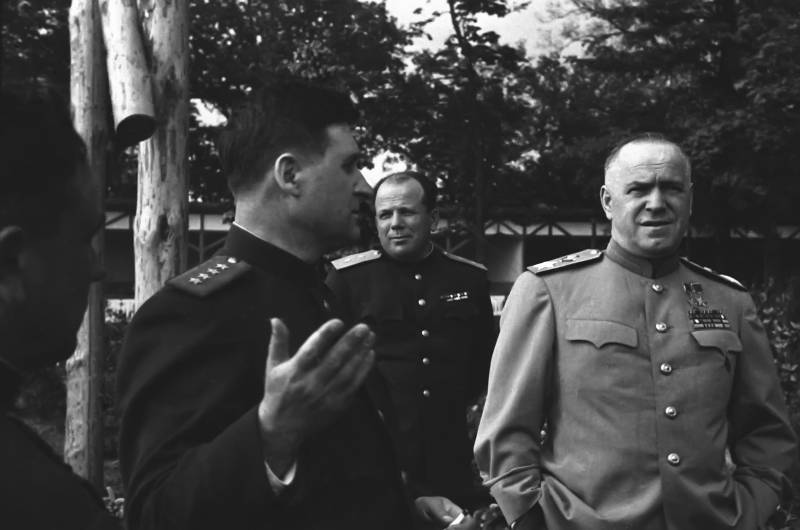 A very important stroke to his military portrait is the fact that, being in April 1945, Deputy Commander of the 1 Belorussian Front, he, by order of Zhukov, led the fighting directly in Berlin. This is a very remarkable and important touch to the portrait of the commander. It was the Sokolovsky 1 of May 1945 that was the first of the Soviet military leaders to enter into negotiations for a surrender with the head of the German ground forces, General Krebs, becoming one of those Soviet commanders who put the last victory point in the Great Patriotic War. And on May 29, 1945, for the skillful leadership of the combat operations of the entrusted troops, personal courage and bravery, Army General Sokolovsky was awarded the title Hero of the Soviet Union.

The end of the war did not stop the military career of the commander. Since March 1946, he was not only the commander-in-chief of the Group of Soviet Occupation Forces in Germany, but also the head of the Soviet military administration, at the same time being a member of the Control Council in Germany from the USSR. In June 1946, Vasily Sokolovsky became Marshal of the Soviet Union. From March 1949 of the year - he served as First Deputy Minister of the Armed Forces of the USSR (from February 1950 of the year - Military Minister of the USSR).

16 June 1952, the Marshal was appointed Chief of General Staff - First Deputy Military Minister of the country (since March 1953, the Minister of Defense). Since 1954, the Armed Forces of the Soviet Union have entered a new stage of their development - the stage of large-scale technical re-equipment and radical reorganization, the introduction of nuclear missile weapons. The scientific and technical progress, which was pushed forward, seriously expanded, but at the same time, complicated the activities of the military and political leadership of the country, especially in the field of military construction. At the same time, the activities of the General Staff in this difficult time proceeded against the background of a sharp aggravation of international relations. It was precisely the workers of the General Staff in this difficult period that were given the task of ensuring reliable defense of the Soviet Union and the countries of the socialist bloc. To solve this problem, Marshal Vasily Danilovich Sokolovsky used all his accumulated combat and practical experience in command and staff work during the war years, while conducting work on the further development of military science and improving the construction of the country's Armed Forces. 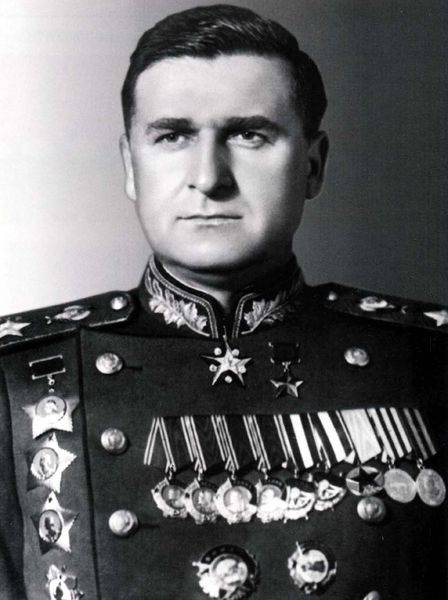 In April 1960, Sokolovsky was relieved of his post as Chief of the General Staff, and in the same year he became Inspector General of the Group of Inspectors General of the USSR Ministry of Defense. Throughout the postwar years, the marshal was actively working to preserve the memory and perpetuate the feat of the participants of the Great Patriotic War. It is known that he was one of the initiators of assigning Moscow the honorary title of hero-city, the initiator and active participant in the creation of the monument to the “Soldier-Liberator” in Treptow Park in Berlin. He also actively supported the idea of ​​creating the Tomb of the Unknown Soldier in the capital. In the second half of 1960, he also did a lot for the appearance of the famous Motherland memorial in Volgograd.

Marshal Vasily Danilovich Sokolovsky died 10 in May 1968, at the age of 70, of which he dedicated 50 to military service. The urn with the ashes of the marshal was buried in the Kremlin wall on Red Square in Moscow. To perpetuate the memory of the commander, much has been done both in Russia and in Belarus. In particular, Grodno immortalized the memory of a fellow countryman, calling one of the city’s streets in his honor, and in the Grodno State Historical and Archeological Museum a part of the exhibition is dedicated to the marshal. Also, the streets named after him are in Smolensk and Moscow. His name was given to the Novocherkassk Higher Military Command School of Communications, which existed until the 2011 year.