6 May 2012
16
Ten to fifteen years after the adoption of the Rapier anti-aircraft missile complex by the British military, it became clear that they needed to bother with the creation of a new class of anti-aircraft defense. Based on economic and practical considerations, it was decided not to create a new air defense system from scratch, but to do it through a deep modernization of the existing Rapier. Competition for the modernization of the old complex won by British Aerospace. This choice of the military can be explained by the fact that shortly before this firm was formed through the merger and transformation of several defense companies, including the British Aircraft Corporation, which created the original Rapier. 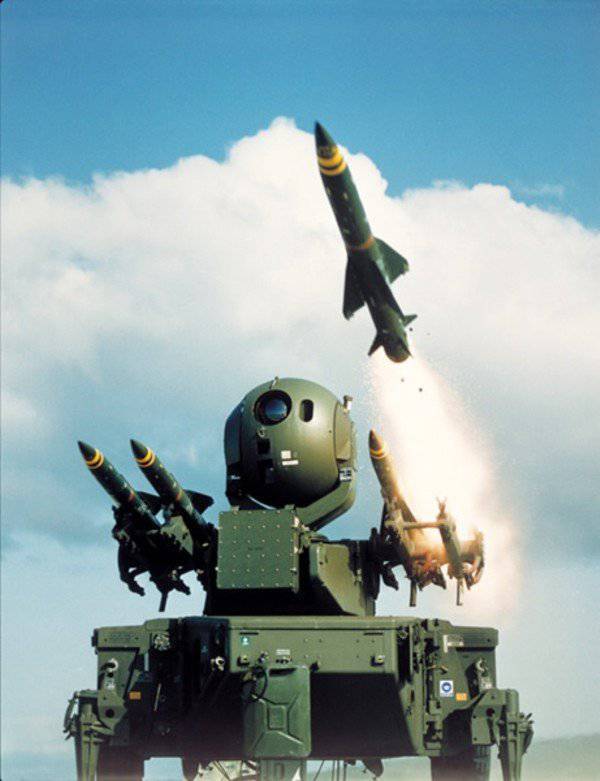 Work on the new complex, called the Rapier-2000, was started in 1986 year. The purpose of the modernization was simple: with small forces and costs, create a new air defense system capable of effectively fighting all existing and future air targets. In addition, it was necessary to increase the potential of the complex with respect to low-altitude targets and to ensure the ability to work in conditions of the use of modern EW facilities by the enemy. Finally, the new air defense system should have sufficient mobility, which required the use of wheeled chassis.

The main element of the Rapier-2000 anti-aircraft missile system is the Rapier Mk2 rocket, which is the direct heir of the original version of the Rapier. The rocket with a length of 2,24 meter and a kilogram 43 starting weight is made according to the normal aerodynamic configuration. In the middle part of the cylindrical body four stabilizers are mounted with built-in command receiver antennas. The handlebars and their drives, respectively, are placed in the back of the rocket, in front of the nozzle of a solid fuel engine. In addition, in the tail of the rocket there are four tracer: with their help, the opto-electronic station of an anti-aircraft missile system can track the movement of the rocket. The warhead of the rocket is done in two versions. In the first case, this is a high-explosive fragmentation warhead with a remote fuse based on a laser rangefinder, and in the second case it is a semi-armored one with a contact fuse. The first is designed to destroy small targets like unmanned aerial vehicles or cruise missiles, and the second is used when attacking airplanes and helicopters. In both combat parts of the rocket there is a self-liquidator. It works in the event that during the first 0,5 seconds of the flight the rocket does not receive commands from the guidance station. Missiles are transported in special containers. Before the equipment of the launcher, the missiles are taken out of the containers, and then mounted on the guides. Among other things, during the modernization of old Mk1 missiles and bringing them to the state of Mk2, British Aerospace designers increased the ammunition life. For this reason, Rapier Mk2 missiles can be stored in a shipping container for up to ten years, of course, with proper storage and handling. 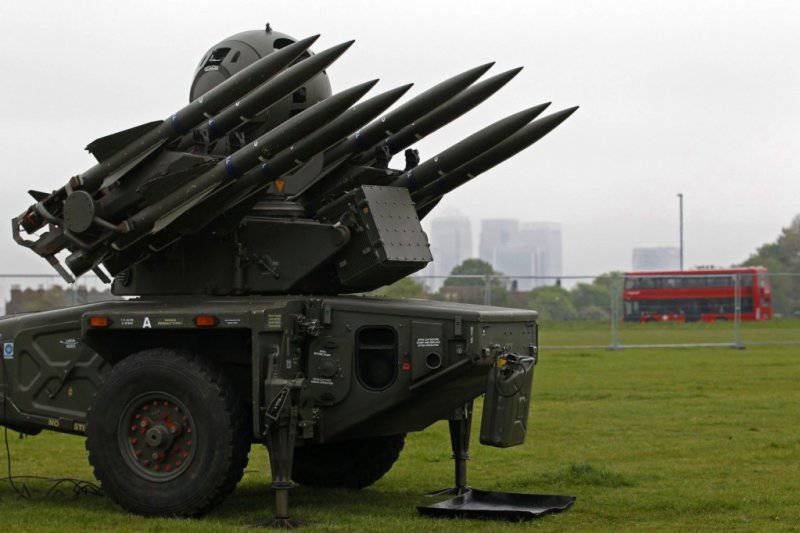 Missile launch is carried out with the guides of the launcher. It is a module mounted on a two-wheeled chassis. Eight guides for rockets and two blocks of an optical-electronic observation station (ECO) are located on the turntable with a hydraulic drive - a target and a hardware one. Thanks to the turntable, the guides and ECO have a circular horizontal guidance. Vertically, guides and scopes can move from -5 ° to + 60 °. Installation of rockets on the guides is done manually by two soldiers from the calculation of the complex.

For the detection and tracking of targets, the Rapier-2000 complex has a Dagger radar station. Radar calculators allow you to detect and track simultaneously to 75 targets. In addition, the equipment allows in semi-automatic mode to distribute targets according to the degree of danger and to build the order of attack accordingly. According to a number of sources, the Dagger radar automatics has the functions of countering anti-radar ammunition. Thus, upon detecting an attack, the station automatically disables the transmission of any signals, which, according to the designers' idea, should confuse the rocket prompting the radiation source. Dagger radar antenna consists of 1024 receiving and transmitting elements and allows you to confidently "see" the target at a distance of 20 kilometers. In addition, Dagger produces identification by “friend or foe” system. 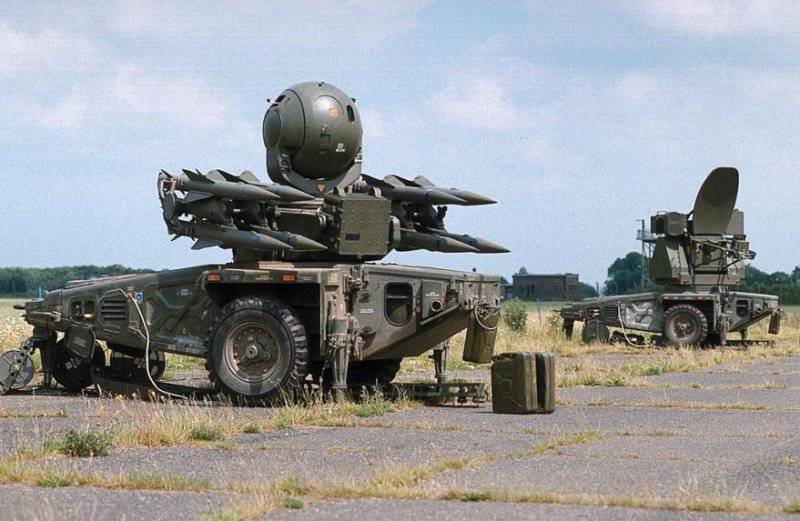 Targeting a missile at a target is the task of a separate Blindfire-2000 radar. It is a further development of the corresponding element of the Rapier complex - the DN-181 radar - and has better characteristics than it. In particular, the Blandfair-2000 uses linear frequency modulation of the emitted signal, which significantly improves the noise immunity. Interestingly, the guidance station complex Rapier-2000 takes a rocket to escort a little earlier than it was on the Rapier. To do this, on the launcher, namely on the target unit, there is an additional antenna control rocket. This antenna is used to put a rocket under the main signal. In the event that the Blindfire-2000 station’s resistance to interference is insufficient, the missile is guided by the ECO. It consists of a television camera and a thermal imager. Using the rocket tracer, the ECO provides the computer with its coordinates. At the same time it is possible to detect and track the target with optical means. However, regardless of the detection method used, commands are sent to the rocket via radio. At the same time, it is possible to fire only two targets - by the number of target tracking devices and missiles.

All elements of the Rapier-2000 anti-aircraft missile system are mounted on three identical biaxial trailers, which can be towed by any available transport of a corresponding payload. The main towing vehicle in this case are off-road trucks: at the same time as mobility, they are also used as transport vehicles. In the back of a single truck, you can carry 15-20 missiles in transport containers. Each caravan on which the complex is mounted is equipped with a separate diesel generator, an air conditioner and a liquid cooling system to ensure the operability of the equipment. In addition to the three trailers with equipment and rockets, the complex includes two remote control panels on tripods. One of them is the workplace of the crew commander, the other is the operator. When deploying the air defense missile system to the combat position, the calculation connects all elements using fiber optic cables. Radio communication between them is not provided. This was done to improve the efficiency of the interaction of systems in the conditions of use by the enemy EW.

The Rapier-2000 anti-aircraft missile system was adopted by the ground forces and the British Air Force in the 1995 year. It was originally planned to produce for their own needs more than two hundred sets of "Rapier-2000", but for several reasons it was possible to do this only after more than ten years. At the same time, the situation allowed British Aerospace specialists to create an export modification called Jernas. From the original Rapier-2000, it differs only in the layout of some of the nodes and the platform used. So, the Jernas launcher and the Dagger detection radar can be installed both on a two-wheeled trailer and instead of the body of a suitable vehicle. This, for example, may be the famous SUV HMMWV or similar cars. As for the control panels, in all cases they are mounted in the cab.