Red artillery in the Civil War. Part of 3

17 May 2018
12
The cessation of the war with Poland made it possible to concentrate the main forces of the Red Army to defeat the forces of P. Wrangel and capture the Crimea. During July-August, 1920 in North Tavria were fierce battles, culminating in the formation of the so-called Kakhovsky bridgehead on the left bank of the Dnieper - the latter had very important operational significance.

For the convenience of managing artillery, the bridgehead was divided into 4 sectors: left, middle, terniy and right. Headed the artillery of each sector by one of the divisional commanders, who in turn was subordinate to the head of artillery of the bridgehead.

The centralization of artillery was envisaged both in the scale of sectors and the entire bridgehead. The artillery fire of the neighboring sectors was mutually linked. On the most probable directions of enemy attacks, areas of barrage were shot at. To eliminate possible enemy incursions into the defense, special maneuverable batteries were allocated, and the maneuver was carried out both by fire and by the battery itself.

Concentration in a single body of the entire planning and control of military operations of a large artillery group was essentially a further development of the principles of operational use of artillery implemented in 1918 near Tsaritsyn and in 1919 near Petrograd. Artillery interactions with infantry and cavalry were carried out by separating artillery batteries to directly support infantry and infantry and cavalry escorts, coordinating tasks with them, organizing general infantry-artillery observation posts, establishing a single system of landmarks and a general scheme of fire.

The Kakhovsky bridgehead was the first to create a system of artillery anti-tank defense. Fighting armored vehicles had special guns that were not distracted by other tasks. Each anti-tank gun was covered by a barrage of at least one light battery. In sectors in tank hazardous areas, “dagger” guns were installed - for firing at tanks direct fire. In addition, duty guns and platoons were assigned to firing positions in case of enemy tanks breaking into the depths of defense. Maneuvering batteries and platoons, which were a mobile reserve, were widely used to increase the density of anti-tank guns. The fire of anti-tank guns was supplemented by concentrated artillery fire from closed positions.

This system proved to be insurmountable for armored cars and tanks of P. Wrangel and played an important role in the defense of the Kakhovsky bridgehead. 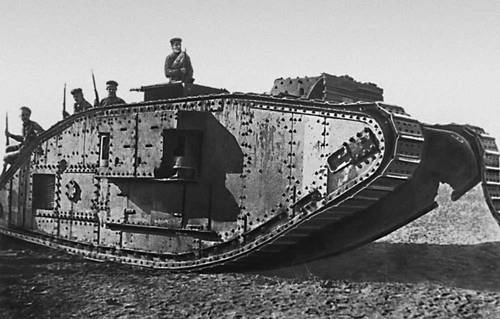 On October 28, the troops of the Southern Front, creating considerable superiority over their adversary, launched an offensive in Northern Tavria and defeated the main forces of P. N. Wrangel. From 7 to 12 in November, the troops of the Southern Front stormed the Perekop fortifications, broke into the Crimea and on November 17 completed the operation.

Artillery was required to reliably defeat the enemy in the areas of the breakthrough. The troops of the Southern Front numbered about 500 thousand bayonets and sabers, 900 guns against 68 thousand white fighters with 250-t guns. In this case, the main part of the troops of the parties was on the isthmuses and the banks of the Sivash.

6 light weapons (36 division) were concentrated in the 52 Army Shock Group, which was to force the Sivash and bypass the Perekop Fortifications, which gave a triple superiority over the artillery of the defenders who occupied the Lithuanian Peninsula. Two platoons, each of which was reinforced by half-arms of the riflemen, were assigned as support instruments during the crossing of the Sivash.

The creation of a strong artillery group under a single command, the engagement of artillery of the second echelon divisions in the interests of accomplishing the tasks of an army operation was a new step in the combat use of young Soviet artillery. At the same time, the 4-hour artillery preparation for the attack of the infantry of the 52 Infantry Division and its fire support was planned. 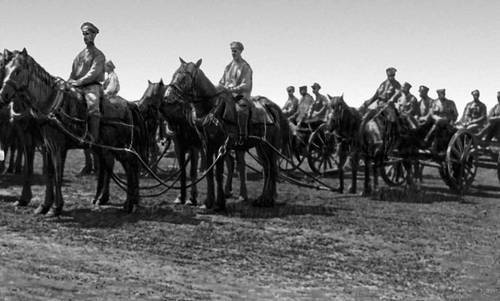 Overcoming the Sivash, army units broke into the Lithuanian Peninsula. Then the whites pulled up their reserves from the Ishun positions, armored cars entered the battle and with the support of long-range weapons counterattacked the units that had crossed. At this critical moment, the artillerymen rolled out the weapons sent to their hands for direct fire and began to shoot white infantry and armored cars at close range.

The breakthrough of the Chongar fortifications was entrusted to the 30 th Irkutsk Infantry Division. But her heavy and 2 light divisions were still on the way. The available artillery, especially heavy, was obviously not enough. Therefore, MV Frunze reinforced the division, first of all with heavy artillery at the expense of the reserve of the front. As a result of the measures taken, the division had 36 tools, of which up to one third were heavy. By the beginning of the offensive from the artillery of the 30 division, two artillery groups had been created, according to the number of offensive directions.

Due to the difficult situation in the Perekop direction, the red artillery of November 8 conducted artillery training several times, and only on the night of November November the success was achieved. The infantry, accompanied by the fire of individual guns, finally mastered the Turkish rampart. The intensity of the fire was high - consumption amounted to 9 shells per gun. During the storming of the Ishun positions, the gunners mostly fired direct fire.

With the breakthrough of the Ishunsky and Chongar positions, the Red Army proceeded to the pursuit of the remnants of the troops of the Russian army. 15 November, she entered Sevastopol. 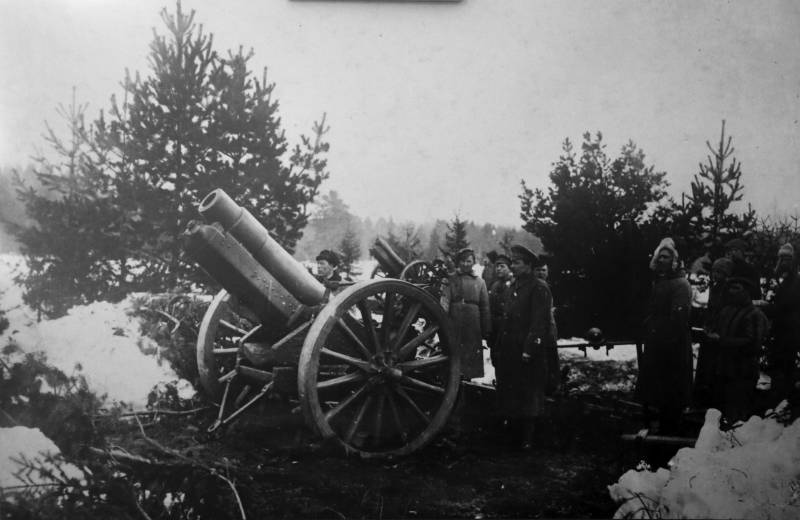 During the years of the Civil War, the artillery of the Red Army went through a complex organizational path - from individual guns and scattered units of the Red Guard and partisan detachments to becoming an independent branch of service.

The initially adopted states during the Civil War underwent significant changes, but, nevertheless, the overall structure of the units and units remained. The main organizational and tactical unit was the division of the 3-battery pack, 4 guns in the battery (in heavy artillery 2 guns). The divisional structure of artillery corresponded to the nature of the hostilities and the economic capabilities of the country.

One of the main principles of the combat use of artillery was to distribute it by battery or by division between rifle regiments and (or) brigades. Batteries and divisions, organizationally not being part of the latter, were assigned to them and acted together with the infantry - in the battle formations of the troops. Based on the situation, temporary associations were sometimes created - special art groups that combined 4-6 batteries.

Decentralized control prevailed, usually within a battery or division. Group commanders were usually appointed division commanders. The function of divisional artillery chiefs was reduced to organizational and material support, as well as tactical planning of subordinate artillery actions in the initial period of the battle. The attack was preceded by artillery preparation for up to 30 minutes with maneuverable forms of combat and up to several hours with a breakthrough in positional defense.

In the defense towards the end of the Civil War, a form of centralization of control appeared, such as the unification of several groups of artillery under the command of one artillery commander. Special groups began to be created - heavy artillery, anti-battery, but organizationally they were not yet formed. Of great importance was the first experience of organizing anti-tank defense on the Kakhovsky bridgehead.

The methods of firing artillery in these years were distinguished by simplicity, and, as we noted earlier, direct fire was particularly widespread. From closed positions, shooting was carried out by observing signs of breaks to destroy, as a rule, observable targets. No ammunition consumption norms were established, the shooting results were determined on the basis of visual observation.

The first of them met with great difficulty in moving due to the absence of combustible and lubricants. The second made an exceptional even for field artillery campaign, making the 100 versts from Apostolov to Berislavl along an unpaved, dry and solid road during 30 hours. Subsequently, the ease of maneuvering of this division was also emphasized by the fact that its two batteries were forwarded along the pontoon bridge to the right bank of the Dnieper, and later they were sent by the troops to Perekop itself.

Thus, the period of the Civil War, with all its specifics, had a significant impact on the development of domestic artillery. 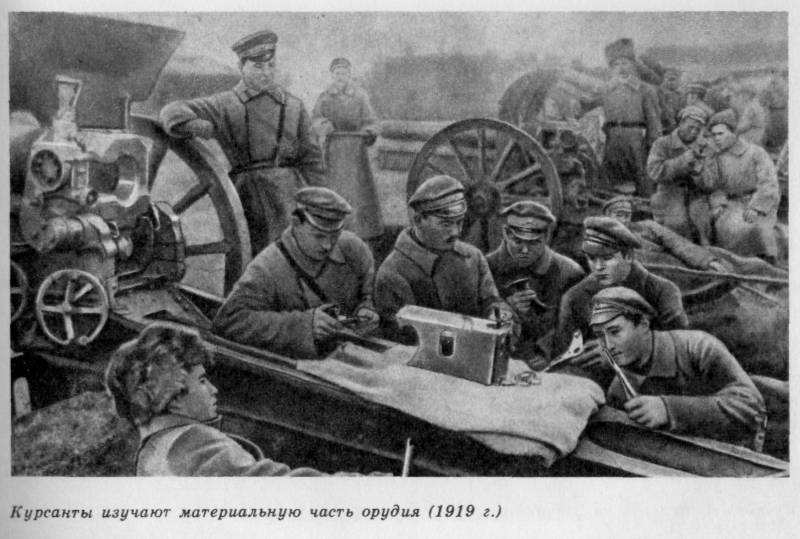