There will be no war again

10 May 2018
23
On the eve of the World Cup in Russia, many observers expect in June a large-scale offensive of the Armed Forces of Ukraine in the Donbas. In Kiev, it is alleged that Russia will not actively help the Novorossiysk republics to repel this attack in order not to spoil the football festival. That is unlikely. 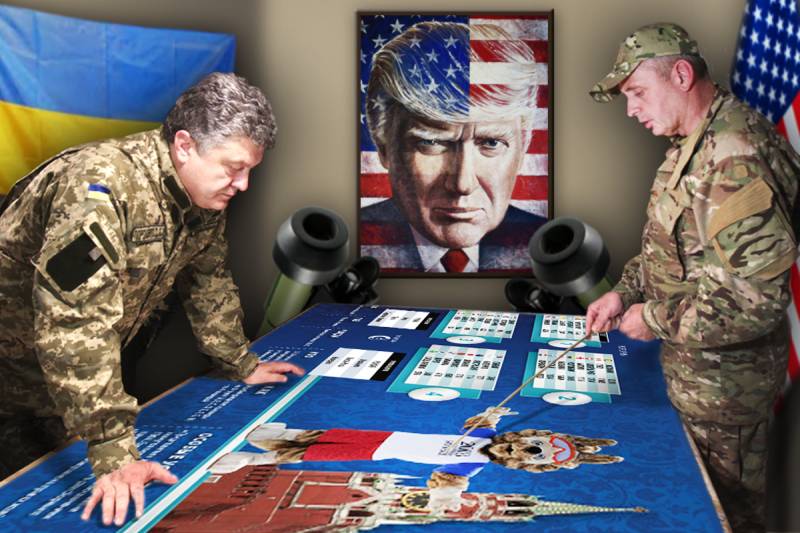 Because in the event of such an attack by the Ukrainian Armed Forces, the football holiday will still be spoiled, and the issues of war and peace are much more important than any sports world holiday: it will pass, but the war and its consequences will remain. Recall that the 08.08.08 war against Saakashvili Georgia was during the Olympics in China, which did not slow Russia down.

The question needs to be put in a different way: if the decision to attack the Ukrainian Armed Forces on the DPR / LPR is made, it can be timed to host the World Cup in Russia or can start immediately after the championship, or, in general, can be tied to completely different circumstances. For some reason, an absolutely important moment is completely forgotten: the June offensive has already been widely announced, that is, the suddenness factor has been completely lost.

Another question: the decision on a large-scale offensive in the Donbas will be taken not only by Poroshenko with Poltorak and Muzhenko: it must be agreed with Washington, and, probably, must be approved by Berlin. But the main thing: the label for the invasion from Washington.

The third question is: are the APU ready to launch a big offensive? Poroshenkovsky ministers are always ready, but at the end of 2017, the Chief of the General Staff of the Ukrainian Armed Forces resisted such an offensive, speaking of imminent great losses, and even threatened with his resignation.

Finally, are there any reasons to believe that Moscow will not intervene for the Donbass? The most "weighty" is just holding the World Cup, but everything else says the opposite. Nobody speaks about the introduction of peacekeepers in the Donbass, except Poroshenko, who needs at least something to say to his neo-Nazis, his teeth to speak.

In a recent statement from Moscow, presidential press secretary Dmitry Peskov said very dryly and briefly that the Minsk process was torpedoed by Kiev, blocked by the law on “reintegration of Donbass”, and reiterated that the Minsk agreements are the only way to resolve the conflict. And it's all. In the event of a softening of Moscow’s position on the Donbass, some negotiations would be conducted, like Volker-Surkov, the process of entering peacekeepers in the Donbass was discussed, but all negotiations are now suspended. The Norman troika in Aachen is assembled without Putin.

The United States shipped the Bandera regime to the notorious Javelins, allegedly with a ban on use in the Donbas. It is interesting that a comment followed from Washington: it will in no way affect anything. Chancellor Merkel expressed concern about this, and Moscow did not respond at all. It seems that Vladimir Putin took a position of harsh silence in Ukraine, as before in Syria, on the eve of the American attack with cruise missiles on the alleged chemical attack of Bashar al-Assad in Eastern Gut.

Most about the position of Moscow says, perhaps, the introduction of boats of the Black Sea fleet to the Sea of ​​Azov after the pirate capture of the Nord seiner: the Black Sea Fleet immediately took advantage of this opportunity to strengthen its position in the region.

The most important for Poroshenko is, of course, the position of Washington. Arsen Avakov, the Minister of Internal Affairs and the unofficial Minister of Nazi Formations of Azov, met recently in Washington with Wess Mitchell, Assistant Secretary of State Mike Pompeo, and had a lengthy conversation with him. After that, he discovered the secret of the issues discussed: the tactics of "small steps" to liberate the Donbass and Crimea. But more importantly, his recognition in large-scale military affairs: "The APU will face enormous losses in the event of a clash with Russia in the Donbass."

New Secretary of State Mike Pompeo is President Trump’s man, so his assistant works for Trump exactly, while Senator John McCain’s people pushed the decision to supply Javelin, it was signed by Trump under pressure. While Trump did not end the war with the neocons McCain and Clinton, the war in the Donbas, fraught with aggravated relations with Russia, he does not need. Wess Mitchell apparently conveyed this to Avakov, so he made an unusual statement for him, a neo-Nazi, about the "enormous losses of the APU."

Mike Pompeo made a keynote statement recently: “We would like Russia to rejoin the democratic world and behave in a different way than today,” Donald Trump himself congratulated Vladimir Putin on his inauguration. If we abandon the mantras binding on the Western public about “Russia's behavior”, then the content part of Pompeo’s statement is Trump’s earlier intention to somehow get along with Russia. However, how much does Trump control the situation in America? - that's the question. John McCain and his work still lives, and the reincarnation of the dying McCain in Kurt Walker is obvious.

What does all this mean? There will not be a big offensive of the Armed Forces of Ukraine in the Donbas, which many people are talking about today: official Washington does not order, and Moscow has taken a position of harsh silence, behind which there can be the most unexpected "polite" consequences. This idea Wess Mitchell, apparently, reported to Avakov.

“We live in a difficult moment when a black swan can fly out of nowhere. The situation is extremely unstable, ”notes Kiev political analyst Mikhail Pogrebinsky. Serious provocations of neo-Nazis in the Donbas are possible, as in Kiev itself. But "it will not come to large-scale military actions": this is how Vladimir Putin responded to such threats in 2015. Then, massive artillery strikes were made at the concentration points of the APU armored units, and indeed, there was no offensive after that.

Ctrl Enter
Noticed oshЫbku Highlight text and press. Ctrl + Enter
We are
Situational analysis of the death of the MH17 flight (Malaysian Boeing 777), made on the basis of engineering analysis from 15.08.2014Results of the week. "God forbid to see Russian revolt, senseless and merciless!"
Military Reviewin Yandex News
Military Reviewin Google News
23 comments
Information
Dear reader, to leave comments on the publication, you must sign in.