9 May 2018
67
The popular belief that the German capital was razed to the ground during its assault by Soviet troops is completely untrue. 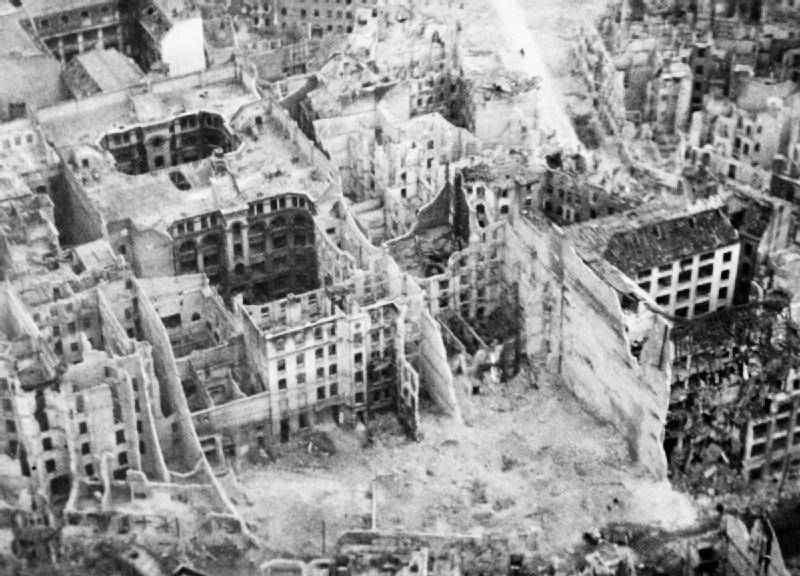 The well-known military newsreels, in which Soviet soldiers are fighting on Berlin streets among solid ruins, certainly create for many viewers and especially for young people, who, as a rule, are not inclined to delve into the details of old historical events, the impression that the capital of the Third Reich turned into a heap of smoking debris precisely as a result of the merciless Soviet assault.

In addition, Western propaganda unevenly breathing to modern Russia picks up this topic with pleasure. You don’t feed you with bread, let me just talk about "Russians who know no pity" who are not expensive in the world and whose barbarous nature can never be understood by a finely organized and delicately educated Westerner.

In fact, everything is not quite so, or rather, not at all. Without in any way detracting from the scale and brutality of the fighting during the Berlin operation, I consider it necessary to draw your attention to some important details.

The German capital capitulated very quickly for a city of this size and value. There are two main reasons for this: a truly uncontrollable victorious impulse of our army and the complete loss of will to resist on the part of the Germans, who realized by April 1945 of the inevitability of their complete defeat in the war.

Although the operation itself took place from April 16 to 8 May 1945, the battles within the city itself continued much less. Actually - from April 21 to May 2, when the Berlin garrison capitulated. That is about a week and a half.

In such a short time, the almighty Red Army could not have destroyed such a huge city to the ground. If I wanted to. Moreover, the battles in the city blocks had the specifics that there were practically no front lines as such. The troops, both their own and the enemy, were mixed to such an extent that sometimes in the same house there were positions of both German and Soviet units. In such circumstances, the Soviet command was forced to sharply limit the combat use of urban bombing facilities aviation and heavy artillery, which could lead to serious losses of their own troops. And this, in turn, further reduced the material damage that Berlin suffered during the Soviet offensive.

And, nevertheless, the city was almost completely destroyed. How can this apparent paradox be explained? Any Berliner of that time would have explained him without the slightest labor. Because the destruction of the capital of the Third Reich took place in his eyes for a number of years and the Soviet assault played a far from central role in this.

The main reason for the actual death of Berlin became the so-called "carpet bombing", conducted by the Anglo-American aircraft throughout the war. For those who do not know, I will explain: this expression has nothing to do with knocking out carpets. But to get rid of the life of entire cities along with their entire population - the most direct.

The military-political leadership of Great Britain, a country whose territory was minimally hit by enemy strikes, and the US government, a country to whose territory, not counting Pearl Harbor, not a single enemy shell had flown at all, for some reason decided that in a war with Hitler, all means are good. Even the most barbaric. And they began to systematically burn down the German cities, making no difference between military factories and residential quarters, hospitals, schools, maternity hospitals.

The Soviet Union, which suffered monstrous losses from German aggression and who had the full moral right to repay the Germans with the same coin, did not accept such atrocities against German cities and people. And the Anglo-Saxons have gone! And with amazing ease. What, generally speaking, says a lot. Including the fact that they are still unlikely to stop at any crime to achieve their goals. As for Berlin in particular, its methodological transformation into rubble started already in 1943 year.

However, the truly total destruction of Berlin from the air began only in 1945 year. When, after the Yalta conference of the Allies, it became finally clear that the German capital would be included in the Soviet zone of occupation. It was then that the order was issued on the complete destruction of the Anglo-American aircraft not only in Berlin, but in general all German cities that were to come under the control of the Soviet Union. It was then, in February 1945, that the city of Dresden was almost wiped out, in which about two hundred thousand people died in one day. Mostly civilians, refugees and allied prisoners of war.

The most immoral and criminal lies in the fact that the bombing of the first months of 1945 had no military significance. Hitler's Germany was on the verge of gasping. And the destruction of its cities from a military point of view was absolutely meaningless. It was a blatant massacre, the only rational purpose of which was to inflict maximum harm from the United States and Great Britain to its formal Soviet ally, who should have only ruins. And only the rapid advance of the Red Army and the soon-to-come end of the war saved the rest of East Germany from complete annihilation from the air.

But in Berlin, our "valiant" allies managed to bomb the full program.

“Everything that happened before, faded 3 February 1945, when, under the cover of 785 fighter P-51" Mustang "over Berlin appeared 950" flying fortresses. " The aerial armada dumped tons of bombs on 2298 urban areas, plowing Tempelhof and Schöneberg districts, as well as the city center. According to “average” estimates, the number of victims among the population on this day was thousands. They call numbers up to 25 000 killed.
26 February 1945 horror repeated on an even larger scale - 781 B-17 and 285 B-24 dropped 2796 tons of bombs on the city, with virtually no losses on their part. Of course, this was not the end: practicing new tactics, March 18, March 24, April 20, the Americans repeated the raids over and over again, in which they participated before the 1200 bombers at a time. The city beneath them turned into ruins, and the exact number of the dead was not possible to establish. By approximate calculations, it was about 50 000 people. "

That is why, when the Soviet troops came close to the German capital, they saw in front of them a “city of former houses,” as the surviving inhabitants joked bitterly at that time. And although the storming of the city, of course, did not add beauty and architectural brilliance to it, the historical truth is that the destruction of Berlin was mainly the work of Anglo-American bomber aircraft, and not the Red Army. Moreover, this destruction at its main stage, in February-March 1945, had not so much anti-German sense as anti-Soviet. The "allies" thus avenged Stalin for the fact that his army first reached Berlin and liberated half of Europe.

It only remains to recall that the Anglo-Saxons did this kind of nastiness to us at that moment when relations between the USSR and its western "partners", at least officially, were at the highest ally level, when nothing seemed to be able to darken them in the future. Now imagine what these geopolitical predators are capable of with respect to Russia today, when even in official speeches they assess their relations with it as “worse than ever.”