Equestrian army of the Kaiser. H. 1

12 May 2018
60
Before 1914, the German cavalry consisted of 103 cavalry regiments, consolidated into an 51 brigade (2-regimental composition each), distributed among the army corps - one per building. During this period, the cavalry had no higher units - in the German army there was only one cavalry division - the Guards, which consisted of the 4 brigades.


The Germans believed that in the coming war, cavalry was unlikely to play a large role, although they intensively studied the experience of using cavalry, both at maneuvers and in other armies. In accordance with the statutory requirements, the cavalry should strive to solve the tasks set before it in an offensive spirit - only where it was impossible to act with a spear, she should take on a carbine. The cavalry should not have to wait for the attack of the enemy - she should have attacked first. 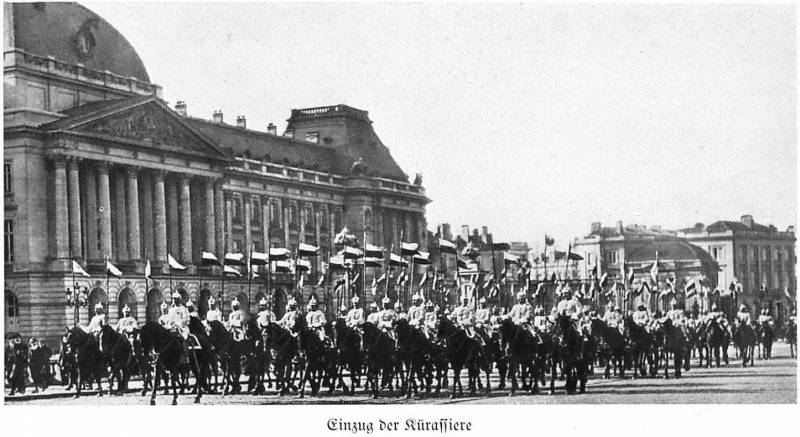 After the announcement of mobilization in 1914, the cavalry received a new organization. Its smaller part (38%) was assigned to the peacetime infantry divisions as divisional cavalry (based on the squadron 3 per division); reserve divisions, which were formed only during the mobilization of the army, were assigned to the newly formed reserve squadrons. Most of the peacetime cavalry (62%) was consolidated into large organizational units — cavalry brigades were consolidated into cavalry divisions, and the latter into cavalry corps. A total of 11 cavalry divisions were formed - 10 of them comprised 4 cavalry corps. Each division consisted of three brigades — that is, of 6 regiments of four squadrons. Infantry was also included in the cavalry corps in the form of the Chasseurs battalions. 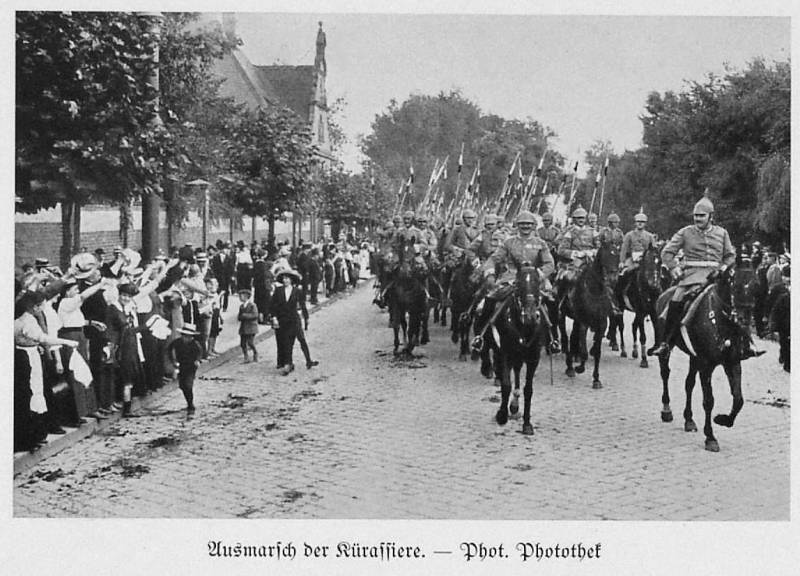 In total, the Germans launched the 1914 in August:

On the Eastern Front - in East Prussia - the 1 Cavalry Division.

Cavalry regiments marched to the war as part of 4 saber squadrons (each of an 4 platoon). In total, the regiment had 250 officers, 6 doctors, 83 non-commissioned officers, 633 privates, 696 drill horses. The cavalry convoy consisted of 19 twin carts and 62 clockwork horses.

Each cavalry division was given: an equestrian artillery division consisting of 2 batteries and 6 guns in each; 1 - 2 Jaeger Battalion and Machine Gun Team.

At the beginning of the war, in 1914, the German cavalry corps, especially the 1 and 2, acted quite successfully and played a large role in the Marne operation. But later, in connection with the transition to a positional war, the Germans began to dismount their cavalry units, transferring horses to artillery. Another trend was that all active cavalry gradually migrated to the Eastern Front. As a result, by the end of the war, the Germans had almost no cavalry left on the Western Front - which they regretted in 1918, when large offensive operations urgently demanded the presence of cavalry masses as a means of developing a breakthrough.

All four cavalry corps of the Western Front were at the disposal of the commander-in-chief (this cavalry was called Heereskavallerie) and was assigned to the armies - moving from one army to another, depending on the situation. Therefore, the Germans gave it the above name, and did not call it "army" (The words Her and Armee have different meanings for the Germans. Armee is the next for the corps in the system of higher military units (associations) and corresponds to our concept of “army” as a specific organizational unit. In World War I, all 7 armies of the Germanic Western Front were first directly subordinate to the commander-in-chief (O.N.L. - Oberste Heeresleitung) and only during the war were permanent intermediate command and control instances formed in the form of three army groups (Heeresgruppen), which corresponds to our concept "front". But the Germans had the term “Armee Gruppe” - the army group - a temporary connection, intermediate between the corps and the army. In fact, there were army groups in the Russian army as well, for example, when P. A. Plehve was assigned to lead a group of 2 and 5 armies near Lodz. In one of the promising articles we will focus on these issues in more detail.). Such cavalry was called by the French "independent" (cavallerie independante), and by the Russians - army or strategic. Calling the German cavalry army, we remember that the Germans, in fact, it was not the army - that is, it was not included in the permanent composition of the army.

The Germans fielded 7 armies on the Western Front. The first five armies, which were deployed from Aachen to Metz, were to make a descent to the left, with the right wing through Belgium, having the Mets descent axis. Two other armies (6-I and 7-I) turned around in Alsace-Lorraine - from Metz to the Swiss border.

The 1 Cavalry Corps, moving ahead of the 3 Army and occupying the 16 August height to the east of Dinant, with the help of his rangers battalions and horse artillery, kept under surveillance the French-Belgian forces along the Meuse - between Namur and Givet. But the connection to the Meuse, with its rocky shores, failed.

On August 20, this corps was subordinated to the 2 Army - which sent it south of Brussels. The Belgian Plain was a more suitable field of activity.

The 2 Cavalry Corps, following further on Curtra and Denen, discovered the presence of the British. At this time he was subordinate to the 1-th Army. And 24 August dispersed one French brigade at Tournai.

During the further offensive in front of the front of the 1 Army, the 2 Cavalry Corps continued reconnaissance.

Cavalry reconnaissance complemented by actions aviation - which, with the further advance of the German 1st and 2nd armies, began to deliver more information to the Marne.

In the Marne battle, army cavalry was successfully used to fill the gap formed between the 1 and 2 armies - when the 1 I pulled their troops from Marne to Urku. For this, four cavalry divisions from the 1 and 2 cavalry corps were gradually put into operation. In cooperation with the infantry brigade, they, filling the gap, did not allow the British to break through the German front. This task was effectively carried out by the German cavalry thanks to the cavalry of operational mobility.

Before the front of the German 4 and 5 armies for the army cavalry (4 Cavalry Corps), there was no opportunity for such a broad activity as on the right flank of the German offensive - here the German cavalry soon stumbled upon the deployed masses of the enemy forces . Although the 4 Cavalry Corps hung over the retreating enemy, it always met with strong resistance, forcing it to stop.

The scope of activity of the army cavalry in front of the 6 and 7 armies (3 Cavalry Corps) from the very beginning was stopped by close contact with the enemy armies. The pursuit of the enemy after the Saarburg battle was stopped by the fact that the enemy departed under the cover of their fortresses.

On the hot days of August 1914, the German cavalry horse was very exhausted - and this applies not only to the cavalry of the right wing of the approaching German front (2 and 1-Cavalry Corps), which also had to make large transitions, but also cavalry on the inner flank (4- Cavalry Corps).

The 1 Cavalry Corps had to give one-day 8 of August a day - because the horses were very tired of the mountain roads they were not used to, and moreover, a rework was required. On August 25, one of the divisions of the 2 Cavalry Corps reported severe fatigue of their horses and loss of their performance. Another division, moved on September 2 to harass the enemy, was (for the same reason) stopped.

The cavalry’s performance was also influenced by the lack of food - due to both difficulties in transporting it and the inability (initially) to use rest minutes to feed and water the horses. Usually, late arrivals for overnight stays, mostly already in the dark, as well as early performances had a bad effect on the care and feeding of horses.

On the Western Front, horses were first given (in large quantities) fresh-cooked (with stems) oats, sometimes with an admixture of clover. Gradually introduced into the use of various feed surrogates. The latter, with increasing difficulties in supplying horses with normal fodder, led to a number of errors - for example, the use of the famous sawdust galetes (Sagemehlkuchen), which did more harm than good. 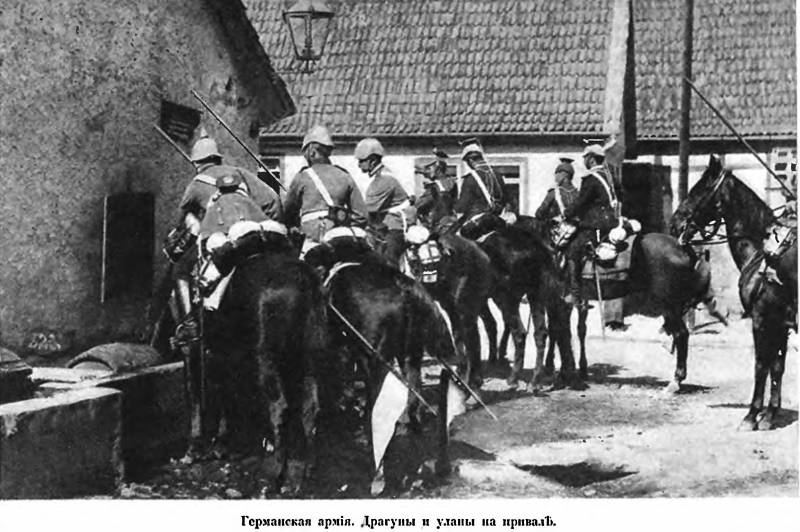 On the Eastern Front, horses sometimes had to be content with dry woody leaves, heather, woody branches, and straw from the roofs of the family houses — which, due to the presence of mold and fungus, often caused stomach and intestinal diseases in horses.

Inexperience in the use of fodder substitutes was manifested, and the horses had to be gradually accustomed to their natural food, herbal. This was a common misfortune of the European cavalry. Thus, from the beginning of the war to the arrival at Iser, the French cavalry lost horses more than people — three-quarters of its personnel. The reason is overloading horses and lack of care for them.

G. Freytag-Loringofen believes that this is a repetition of the same phenomenon that accelerated the death of Napoleon's cavalry in 1812. And, just as in the Jena operation of Napoleon in 1806, the advancing infantry were catching up with their cavalry, chasing the enemy, it was repeated in 1914 on the Western Front. Both then and now the man turned out to be a better walker than a horse.

It was a fact that already in the first two weeks of the war the army was freed from all horses unsuitable for war - but it was in the first two weeks of the hostilities that the cavalry was needed, which stood at the highest stage of its efficiency. The enemy, according to G. Freytag-Loringofen, was even worse - the horses of the French 3 divisional cavalry corps of Sordé, located in Belgium, were completely incapable of movement at the time of unification with the English army. The hull arrived without any real benefit. The whole corps served the service of patrols and traveled around Belgium in all directions - without gathering any valuable information about the Germans. The Germans, according to the above author, did not even see him.

At the beginning of the war, the Austro-Hungarian army cavalry, which possessed a splendid horse force, carried the same traveling service. Already in the second battle of Lviv (June 1915), as G. Freytag-Loringofen notes, she participated in a completely upset state.

Probably, according to the author, the overworking of horses is explained by the fact that the raid of the French and English cavalry was not carried out after the Marne operation 1914 of the year, bypassing the German right flank towards St. Quentin, which promised allies to the allies under the current situation.

During the retreat of the German army after the Marn operation 1914, its army cavalry covered the open right flank from the enemy bypass. Although, of course, the best tactical tactics against bypassing were the constant counterattacks of the German troops - which did not allow the enemy to complete the Marn battle with large-scale parallel pursuit. And when the enemy, gradually using his developed railway network, concentrated more and more troops against the right flank of the Germans, the Germans opposed him in Bapom, in addition to the 6 army units pulled here, also the 1 and 2 Cavalry Corps - the last acted in this battle in a dismounted ranks. An attempt by the 4 Cavalry Corps (brought to the 3-division) to search for the flank and to the rear of the enemy position, bypassing Lille from the north, the Germans failed. The corps could not overcome the extremely rugged (mass of buildings and mines) terrain of the industrial region of northern France.

German cavalry led a successful defensive battle here. But a limited number of shooters, as always with dismounted cavalry, did not allow her to go on to a serious offensive.

The enemy of the Germans acted similarly at that time: D. French used his cavalry to lengthen the infantry front and to fill the resulting front breaks.