12 May 2018
95
Like many other implemented utopian ideas, the supergun awaited an unenviable fate: the Germans destroyed all the tools and technical documentation immediately after the conclusion of peace, which automatically translated it into a category of legends.


The difficult origin of the Colossal gun began in 1916, when Professor Eberhardt came to the design headquarters of the Krupp plant with the proposal to create a gun firing at 100 km. Theoretically, the professors' calculations showed that 100-kilogram projectiles should be beaten at the enemy with an initial velocity of 1600 m / s. The unpleasant air resistance was supposed to be overcome by sending a projectile to the heights of the upper boundary of the stratosphere (about 40 km), where the thinness of the air envelope increased the range of the shot. Three quarters of the flight of the projectile to the target should have been held just in the stratosphere - for this, Eberhardt proposed to raise the barrel of the gun by an angle of at least 500. It is noteworthy that the professor in his project even took into account an amendment to the rotation of the Earth, vital to gunners, taking into account the time the projectile approached the target. The German elite together with the industrialists Krupp believed Eberhardt and installed him 14 months to make guns for the destruction of Paris. It is worth making a small patriotic retreat and point out the design of an ultra-long-range gun (more than 100 km) proposed by Russian military engineer V. M. Trofimov back in the 1911 year, which, as has happened more than once, was rejected. 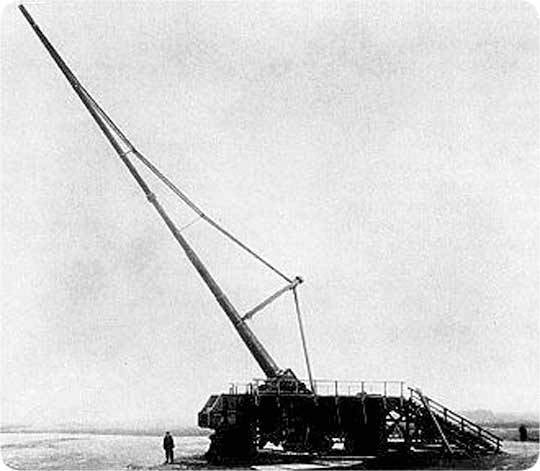 The Krupp plant in Essen (under the direction of director Rausenberg) was engaged in the practical embodiment of the German ultra-long-range gun, and at the very beginning of the project, the choice was made in favor of ready-made barrels of 35-cm naval guns, which, with minor modifications, were to become the basis of the future Parisian cannon of Kaiser Wilhelm. However, while the prototype was being designed, by 1916 the Germans planned to retreat to the Siegfried Line at a distance of 110 km from Paris. Ludendorff eventually demanded that the range of the gun be increased immediately to 128 km. Of course, the 35-centimeter barrel was not enough for such a range, and the Kruppists turned their attention to the 38 cm battleship. Such powerful guns under the SK L / 45 index were originally planned for battleships such as Bayern, Sachsen and Wurtemberg. In the field performance, the gun was named Langer Max (Long Max) and distinguished itself when shelling Dunkirk at a record range of 47,5 km. "Long Max" fired a projectile weighing 213,5 kg with a muzzle velocity of 1040 m / s, which made it an excellent base for the future "Colossal". Rausenberg intended to increase the length of the barrel and thereby accelerate the projectile for Paris to the required 1600 m / s, however, a technological problem arose. Krupp machines at that time were unable to cut threads in barrels longer than 18 m, so the connecting flange came to the rescue. With its help, smooth-walled extension attachments of two dimensions - 3,6 and 12 meters - were attached to the Long Max's rifled barrel. Such a super-barrel in the basic version reached 34 meters in length, of which 1 m fell to the breech, 3 m to the charging chamber, 18 m to a rifled barrel and the rest to an innovative attachment. Of course, the trunk was bent under its own gravity - this sharply reduced the chances of getting into the French capital, so they developed a special cable support system like a bridge. Eyewitnesses claimed that the barrel vibrations lasted two to three minutes after each shot. Due to the use of a replaceable liner (a threaded pipe inserted into the barrel of large-caliber artillery guns), which keeps the gun from extreme pressures and temperatures, the Colossal's caliber was 21 cm. 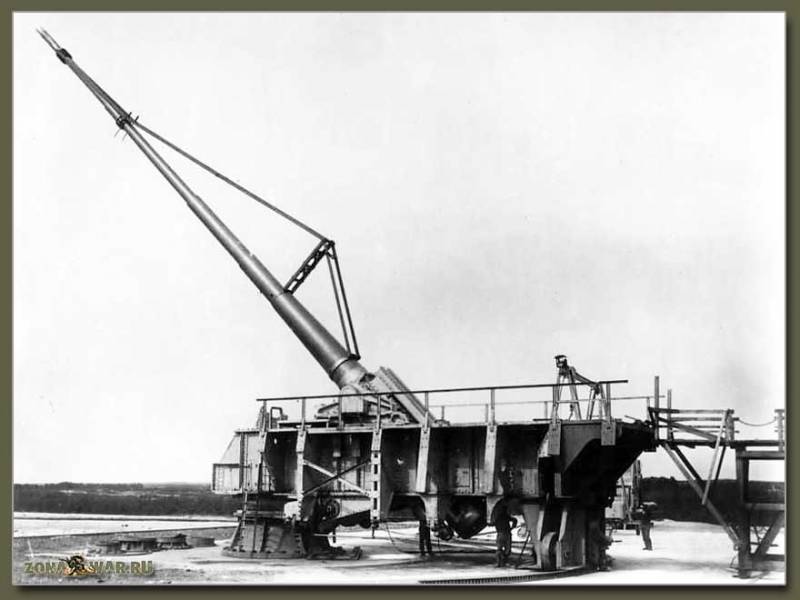 One of the few "lifetime" photos of the gun. Source: zonwar.ru

The first shots the gun made in the summer of 1917, in the city of Mappen - shells flew towards the sea, but reached only the 90-kilometer range. The engineers determined the reason for the weak obturation of the projectile in a smooth-bore nozzle and went to Essen to refine the gun. As a result, they introduced new projectiles with 64 ready protrusions on the two leading belts, which ensure good projectile management of the cuts. The problem of a weak obturation on the smooth part of the trunk was decided by the constructional “highlight” of the leading belts, which, coming out of the rifled part, were turned under the action of the moment of force and locked the barrel bore. Each projectile was very expensive, so the Germans decided to ensure that it fires on the target by installing two fuses at once - the bottom and the diaphragm. And, indeed, all the shells from the Colossal, fired at French territory, exploded, but some did not do it completely. Diligently collected large fragments allowed to get an idea about the design of the projectile supergun. It is noteworthy that the Germans took into account the degree of wear of the liner "Colossal" and all the shells had a different caliber - from 21 cm to 23,2 cm. Also, each of them had its own serial numbers and the most recent (and, accordingly, the largest) went already to the drilled liner 50-70 shots.

21-see the shell "Colossal" with the protrusions. Source: News of the Russian Academy of Rocket and Artillery Sciences

Due to the peculiarities of firing from a cannon, the mass of the charge was not constant: the main part in 70 kg, enclosed in a brass sleeve; In the silk cap, there was 75 kg of gunpowder of the middle part of the charge and, finally, the front part - it was her weight that was selected based on the specific conditions. For example, on the cool day of the debut bombardment of Paris, 50,5 kg were immediately dispatched to the front of the charge, based on calculations for a higher air density. Total for each shot at the gunners took under 200 kg of high-grade powder with a mass of projectile in 104 kg. Gunpowder was a special brand RPC / 12 and differed relatively slow burning, in order to increase the survivability of the trunk.

Corps shell with a serial number. Source: News of the Russian Academy of Rocket and Artillery Sciences

Approximate calculations of the external ballistics "Colossal", carried out in the Russian Academy of Rocket and Artillery Sciences, show that the maximum altitude of the projectile was 37,4 km, which he climbed in 84,2 seconds. With a muzzle velocity in 1600 m / s, the further climb was slowed down; however, on the descending part of the trajectory, the projectile accelerated to the second maximum speed in 910 m / s. Then he again slowed down from friction about the dense layers of the atmosphere and flew to the French at an angle of 54,10 with a speed of 790 ms / s. The time from the shot to the fall of the projectile was weary 175 seconds. 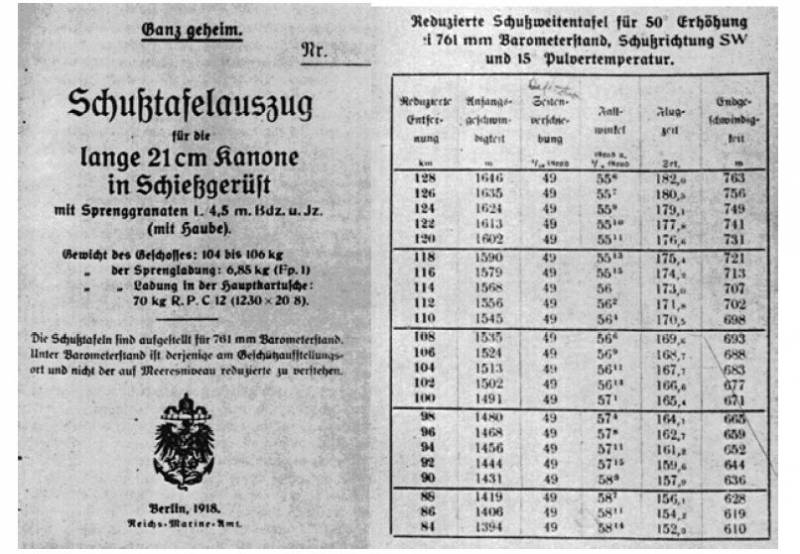 Shooting table for 21-see projectile. Source: News of the Russian Academy of Rocket and Artillery Sciences

The Germans beat the First World War in Paris, setting the "Colossal" on a circular rail track, allowing you to direct the gun in azimuth. The total weight of the installation was 750 tons, and for the concrete base of the carriage over 100 tons of cement, 200 tons of gravel and a couple of tons of reinforcement went. Prior to the maintenance of such a monster, the land gunners were not allowed, and the 60 commandants of naval and coastal artillery with experience in working with such toys were sent to 122. Arranged batteries of guns at three points - at a distance of 100, 80 and 44 km from Paris. The longest battery, disguised in a dense forest near the town of Laon, rumbled first, and did so with the support of sound-masking cannons. The latter were supposed to shoot in sync with the “Colossals” in order to mislead the French sound reconnaissance stations. The Germans approached the artillery raid on Paris very thoroughly - the agent network in the French capital monitored the effectiveness of the strikes, and the aerial bombardment of the city was stopped altogether for the sake of the purity of the experiment. Kaiser superguns fired at the 23 target of the day from March 1918 303 of the year, firing a 256 projectile and killing an 100 man - less than one Parisian per piece of 183-kilogram steel with explosives. And only 29 projectile flew into the city limits, the rest exploded in the suburbs of Paris. The statistics would have been even less optimistic if the 88 March hadn’t hit the St. Gervais, taking a 68 man to the next world and crippling XNUMX. There was a certain psychological effect from “Colossal” - several thousand Frenchmen left the city, not feeling protected from accidental arrival. Realizing the uselessness of such expensive weapons, the Germans removed them from the occupied territory, dismantled them, and destroyed all the documentation. It is not known whether they did it for shame or for reasons of secrecy, but after a while the concept of super-long guns again captured the brains of German designers. And they implemented it on a much larger scale.