How the Cossacks defended the capital

9 May 2018
11
In our country, in places sanctified by the shed blood of defenders, pictures of the past seem to stand up in consciousness. One of these places is 95 kilometer of Novorizhskoye highway, Fedyukovo village near Moscow. The memorial cross and the obelisk with the names of the soldiers who fell here remind of the tragic and at the same time majestic events that took place in November 1941. 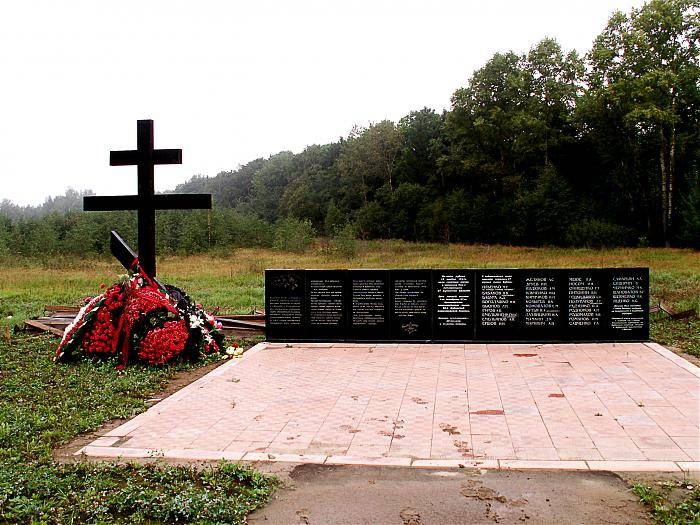 The whole world knows about the feat of the soldiers of General Panfilov, who defended the borders of the capital. Much less is known about the immortal feat of the perfect, almost in the same places, by the Cossacks of the 4 Cavalry Squadron of the 37 Armavir Cavalry Regiment 50 of the Kuban Cavalry Division 2 cavalry general Dovator corps.

The morning of November 19, 1941 was frosty. Winter came early that year, and the ground froze through. The Cossacks, exhausted from multi-day marches and battles, did not have the strength to hammer the loam frozen into the ice, and they did not have shovels. They lay in hastily dug holes in the snow, and listened to the distant hum tank engines. It was German tankers who warmed up the engines of their vehicles. 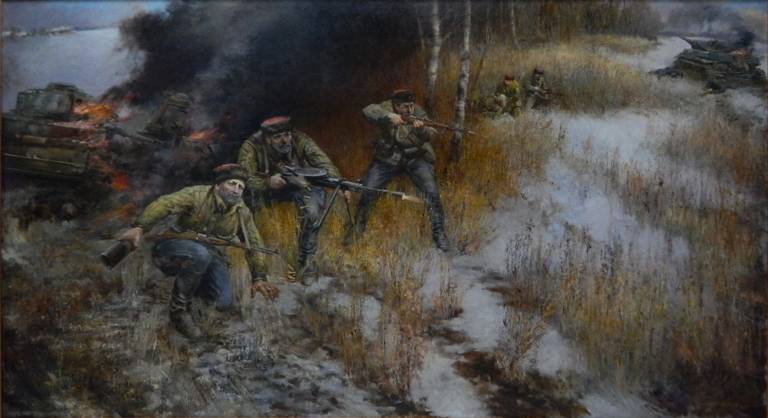 The intelligence service informed that in the village of Sheludkovo it was concentrated to the enemy infantry battalion with tanks, artillery and mortars. A cluster of vehicles was observed in Yazvishche, up to 40 tanks and 50 vehicles with infantry. The Nazis were preparing to attack.

Soon steel cars appeared. Columns, raising snow dust, they rapidly moved along a country road to break through to Volokolamsk highway. Dozens of medium-sized German T-III tanks. Machine gunners were moving behind them - around the company.

As for their fate, the Cossack Dovatrans were not mistaken. They clearly understood that they were taking their last fight under Fidyukovo. This is evidenced by the fact that before the battle they released and scattered their horses, and the grooms were ready to repel the attack along with the rest of the fighters - each rifle was on the account. The Cossacks had no choice - the enemy was Moscow.

37 Cossacks, who occupied the defense, had a pair of light machine guns, carbines, daggers and checkers. To fight with tanks, the fighters had “new” weapon - bottles with a self-igniting combustible mixture.

The Cossacks were buried in the snow on the very bank of the river in order to catch one throw to the tank passing by and throw the bottle on the grid behind the tower through which the engine “breathed”.

Brave covered his rifles with fire carbines his comrades, trying to cut off the infantry covering the tanks. During the first attack, the Cossacks managed to set fire to several cars.

The tanks that survived the first battle withdrew, but the attacks soon resumed. Now the Cossacks defensive positions were well known to the enemy, and the tanks could conduct aimed fire. But the new attacks of the Nazis were repelled. The Kuban also suffered losses, but even the seriously wounded remained in the ranks, continuing to fire at the enemy to the last.

Realizing that the frontal attacks for a long time will not be able to cope with the Cossacks, the Germans sent tanks with infantrymen on armor, bypassing the positions of Kuban, to strike from the rear. In the heat of battle, the Cossacks saw the tanks late in their rear and did not have time to blow up the bridge across the River Gryad. And now the approaches to him were swept by the enemy. A small group of wounded Cossacks under the leadership of junior political leader Ilyenko (the commander was killed the day before and there were no officers in the squadron) took up defensive positions in the way of the tanks. The fight broke out with a new force, the new steel boxes of the enemy were flared.

By evening, the fire stopped, there was no one to resist the enemy, but the Germans stopped attacking. The Cossacks fulfilled their task, on this day the enemy was unable to ride the Volokolamsk Highway, and on the spot where the Cossack squadron received its last battle, 28 tanks were left to burn, nearly a hundred and a half German bodies died in the snow.

It may be noted another episode characterizing the Kuban heroes. Before the battle, they, in obedience to human compassion, did not fulfill the strict order of the Stavka: when the Red Army departed, they had to burn villages behind them so that the Germans, who had problems with supplies, had no place to sleep in fierce frosts. However, not all residents of Fedyukovo village fled into the woods, and to burn their huts meant to condemn innocent compatriots, mostly women, old people and children, to certain death. And the Kuban Cossacks, risking being under the tribunal (if they had survived that battle), would not have burned the village.

To the Cossacks who had fought to the death, the messengers were sent with an order to withdraw, but, unfortunately, not one of them came alive. Only the regiment's son, Alexander Kopylov, was able to pass on the battlefield, but it was already evening, he could not find any of the living Cossacks: "... I got through the pipe to the battlefield, along the courses, fighters dug in the snow, climbed to several firing points . Around the tanks were burning, but our fighters were no longer alive. In one place I found the dead German officer, took the tablet from him and came back. ”

What was seen was reported to the regiment commander. Armavir regiment, having collected all the cash people, hit in the equestrian ranks through the Volokolamsk highway. The Cossacks went on this murderous attack in the hope of saving at least one of their own. And if no one is left, then revenge. Let it be at the cost of your life. 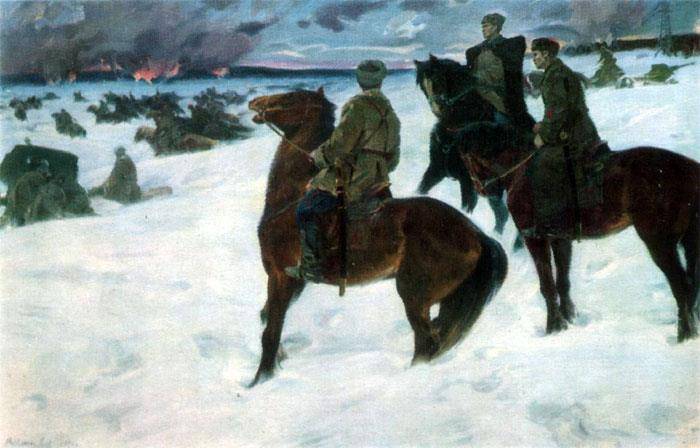 In the evening twilight, the Germans, not understanding how weak the forces of the Kuban Cossacks attacked them, did not withstand the swift and furious attack and hurriedly retreated. Just a couple of hours the village was again in the hands of the Cossacks. Kuban could collect their wounded (several participants of the battle survived). But even the dead comrades found not all. There was neither time, nor strength, nor opportunity to bury those found in the icy ground. They were buried in the snow at the edge. The commander of the regiment, in which there were only a few dozen living Cossacks, sought to quickly leave the village, not waiting for the Germans to regroup and strike. This would mean the death of the entire regiment. And the Armavir regiment went into the winter, snowy night, giving the last honors to his comrades.

After the battle of 19 in November, 1941, the 37 th Armavir cavalry regiment, accepting reinforcements, continued to fight, and did it just as heroically. By the end of the war, his Orders of Red Banner and Suvorov decorated his Battle Banner, he became the 9 Guards and received the honorary title Sedletsky. 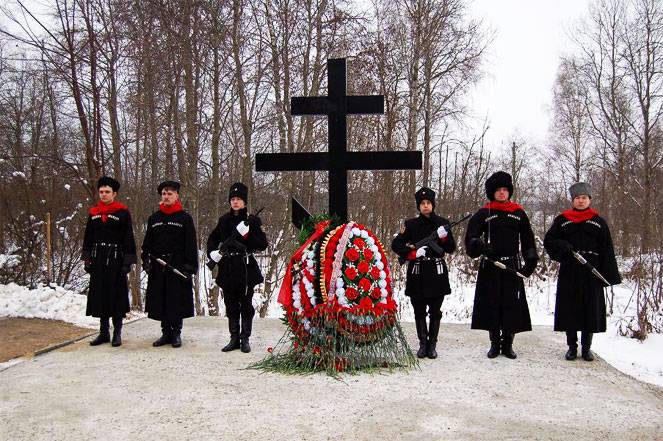 Ctrl Enter
Noticed oshЫbku Highlight text and press. Ctrl + Enter
We are
Cossacks in the Wehrmacht and the SSFeat Ikansko hundreds
Military Reviewin Yandex News
Military Reviewin Google News
11 comments
Information
Dear reader, to leave comments on the publication, you must sign in.