"Ivan Gren": the problem is not solved, but indicated 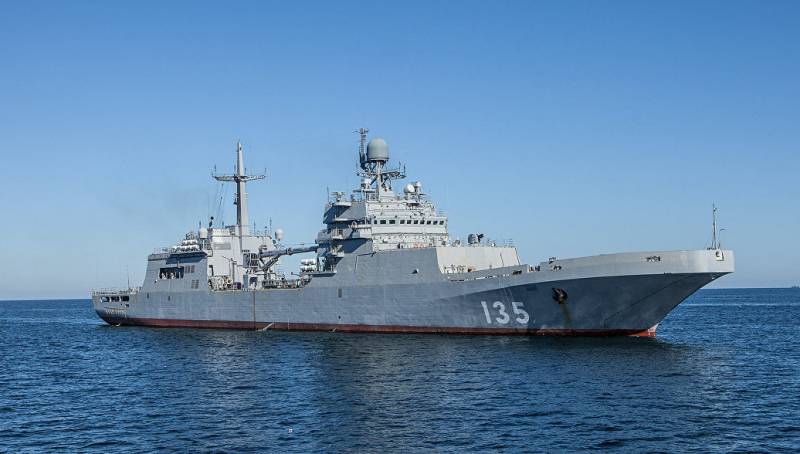 Good news for patriots and reason to think for smart people. The state tests of a large landing ship "Ivan Gren" have recently completed.

The official site of the Yantar plant (Kaliningrad) states that the ship has now returned to the plant, where it will be inspected for technical condition, equipment and final finishing check.

At the end of May 2018, the Ivan Gren will be handed over to representatives of the Russian Navy. 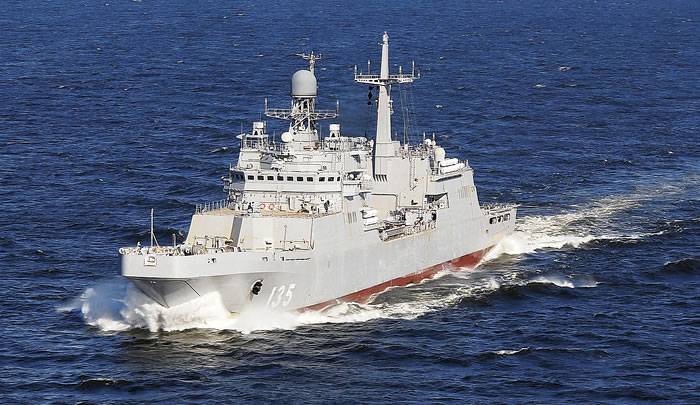 On the one hand, the news, I repeat, is good. It’s not a secret for people who know that Russia doesn’t have modern landing craft. And the situation with Syria only aggravated the situation.

The first God knows for how many years the BDK that will be commissioned is good. But there are nuances.

And these nuances are such that as part of our fleets, the landing ships of the 80 project built in the 775 of the last century in the socialist Polish People's Republic are still in operation. 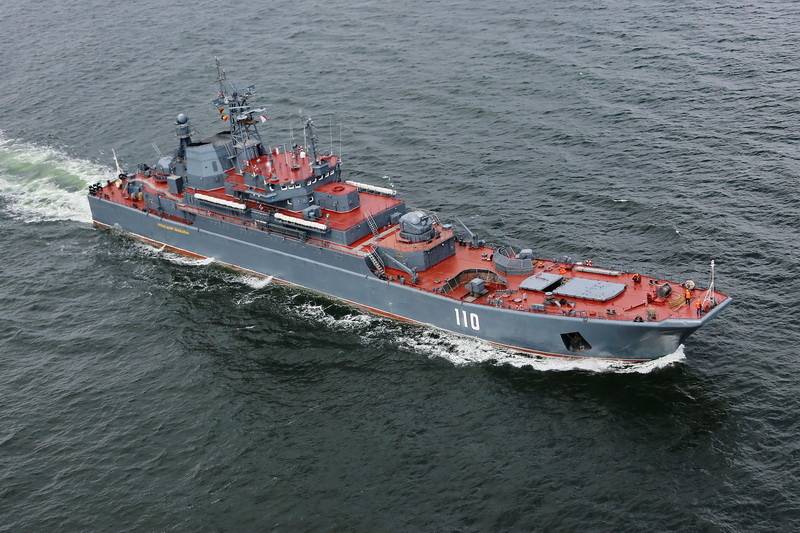 Three of the twelve ships of the first series. 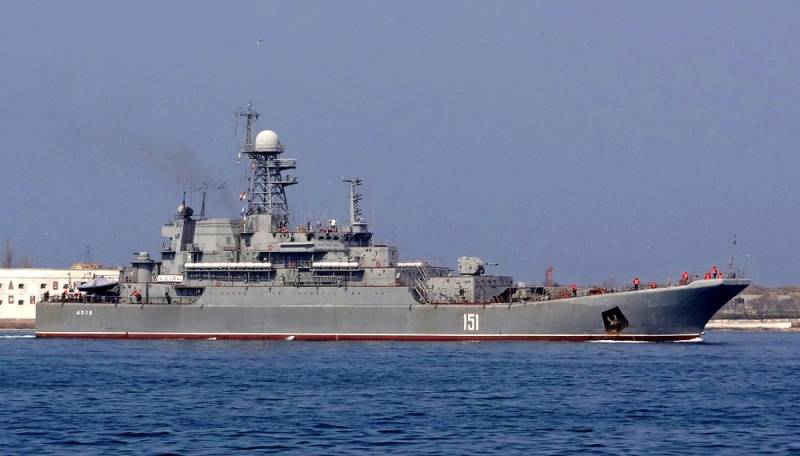 And this is not the worst. The worst thing is the BDK project 1171, which also produced the plant "Amber". Scary is not what is made on the "Yantar", scary - when. 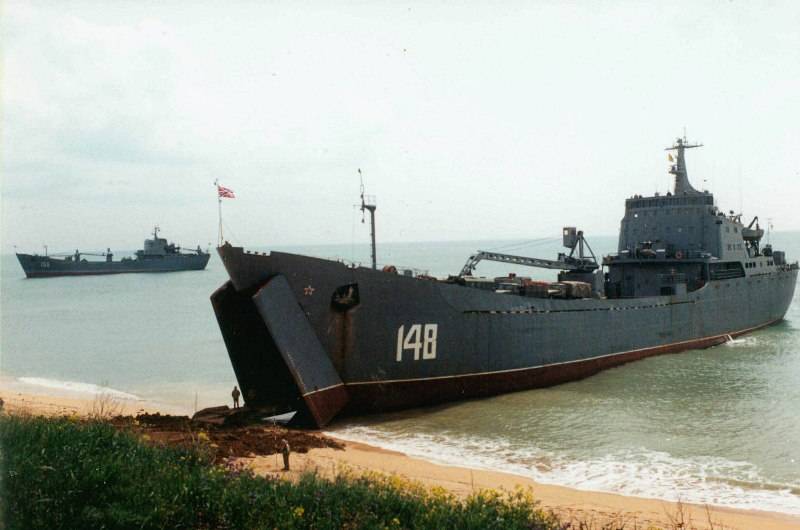 It would seem, "Ivan Gren" - a breakthrough?

On the one hand, yes, in comparison with the same BDK of early projects, “Ivan Gren” possesses more economical engines, there are two helicopters, more comfort for the crew and landing force.

On the other hand, the development and construction of "Ivan Grena" lasted so much that it became outdated, without becoming operational. Fact.

How else to explain the reduction of a series of ships of the project 11711 to two units? How and when will Peter the Morgunov be built? So far, no one can clearly explain.

"Grena" grind out. Otherwise you will not tell. Six years of development, three times changed the terms of reference for the project.

Ugly, of course, to compare the incomparable, but 26 January 2001, one sea power issued a task to build a nuclear aircraft carrier itself. The aircraft carrier was solemnly commissioned on January 10 2009. Also 8 years ...

Of course, comparing the BDK "Ivan Gren" and the aircraft carrier "George Bush" is not just incorrect. But this is certainly not my fault.

For the 8 years, the maritime power has been building an atomic aircraft carrier with a displacement of 97 000 tons. A power claiming to be a sea power for the same period is building a BDK displacement 5 000 tons.

Not without flaws, yes.

It is difficult to say what is more important, the uninterrupted work of the latans on “D. Bush "or stability and reverse at the" Grena ". Judging by the fact that state tests are over, the problem was finally eliminated.

Or, as usual, pretend to fix it. This refers to the problems of "Ivan Gren", naturally.

In any case, "Ivan Gren" will serve. Whether Petr Morgunov can do this is not entirely clear. In the year 2016 flashed messages on the fact that in the Russian Defense Ministry it was decided to build larger ships of the new generation.

Who and where, while the secret.

Do you really need these BDK fleets?

Syria has shown that if the state conducts active operations beyond its borders, then yes. Are needed.

Of course, if “there is no money, but you are holding on,” then it is quite possible to get along with the rented dry cargo ships and rollers. Funny, of course, but what to do?

“Dear, we are arranging a war here, give a dozen barges for hire ...”

Laugh laughter, and the problem "Ivan Gren" outlined. We have forgotten how to build large ships. And the second subtext. We have no one to build ships in such quantities and quality.

Now Mihans will argue that we built what ships! "Eagles"! The fear and horror of all NATO floating in the oceans.

Well, yes, they were building. 20 years ago. And since the transfer of Peter the Great, Baltic Shipyards have built icebreakers and ... icebreakers. The exception is three frigates for the Indian Navy. Everything.

Yes, submarines are being built here. I will even say more: we are building it just stunned what good submarines. And to argue with the fact that "Borey" is not scary for enemies, there will be only a clinical idiot.

We build boats. Artillery, anti-sabotage, rocket. But boats are being built in Ukraine. Not an indicator.

But frigates, corvettes - alas. Are standing. Without engines. And they will stand for a very long time. Even despite the fact that the Defense Ministry of the Russian Federation with all its forces is trying to complete them. It is possible that there is even money.

Forces are those who “did not fit into the market” and now plow anywhere and in any field, but not where ships are assembled and engines are built for them.

Or - the most vile option - not in our country. This, too, quite often takes place.

Overall, the situation is not the most beautiful: to build your ships on a proper scale is not yet possible, and pride does not allow ordering in the same Korea.

Or the sad experience of Mistral.

Speaking of the fact that large ships did not build in Russia for a long time, only the second part of the problem is indicated. And indeed it is. Twenty years since the construction of the last big ship.

Sad? But a fact. Even gas tankers are easier to order for Koreans. And once the tankers of the project "Crimea" with a displacement of 180 000 tons were a reality. 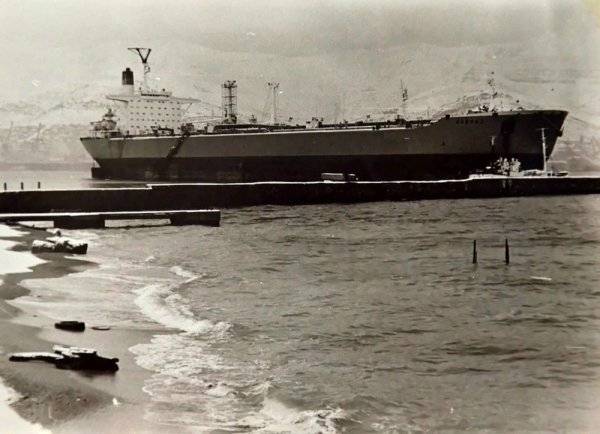 But even considering that in the times of a developed democracy, not everything has been collapsed yet, nevertheless, it is always very difficult to organize the construction of ships in a completely new project. And the fact that we are building huge submarines will not help in the creation of frigates and destroyers.

It is good that they are slowly forgetting about the projects of atomic aircraft carriers.

We must start with a smaller one. With corvettes, frigates, BDK. And then, having restored the base and personnel system, try to build something aircraft carrier. Over 8 years. In the meantime, once in such a period, only the BDK in 5 000 tons is obtained, it’s too early to even think about aircraft carriers.

Although, of course, many will have a different opinion on this matter.