Not exactly what was expected. The troops received simplified versions of the T-80BVM

7 May 2018
121
In the Victory Parade, which will be held in Murmansk, T-80BVM is involved in its newest version. The photo of cars published on the site of the Ministry of Defense. Reports about it Messenger of Mordovia. 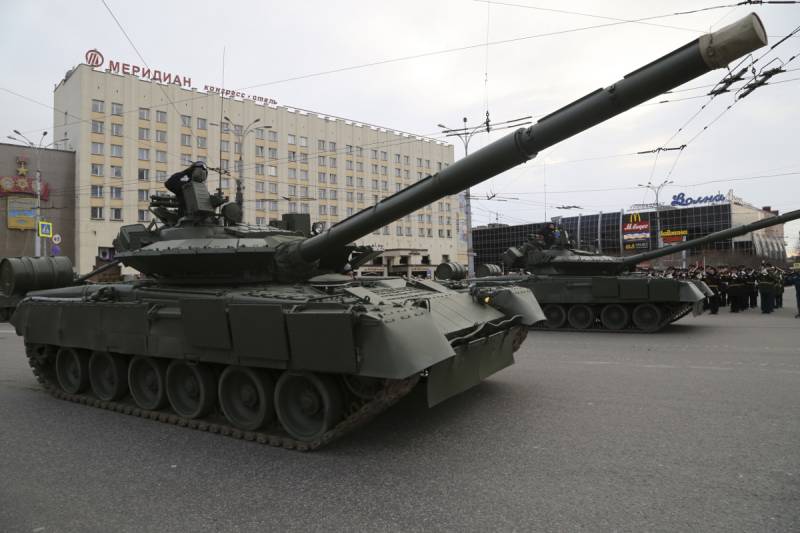 “Many military experts, and even ordinary lovers of the national armored vehicles, were puzzled that the front vehicles turned out to be in a somewhat simplified configuration than the variant“ lit up ”under Luga, on the territory of the 33-nd military ground. A little later, this “Luga” “eightieth” together with T-90M and BMPT “Terminator” took part in the exercises “Zapad-2017”, ”says an article by Lev Romanov.

Then the machine was pleased with a sufficiently powerful protection of the stern and side projections, in many respects similar to the one that is now used on the T-72B3 of the 2016 sample of the year and will be on the T-90M.

“What we see at the Parade in Murmansk: if the front projections of the tower and the body are covered with powerful“ reactive ”armor Relic, then the dynamic defense of the sides is the same as in the T-72B sample ... 1989 of the year. And, as you know, it is no longer effective enough, ”the author notes.

Apparently, the military leadership stopped at a cheaper version of modernization.

At the same time, the publication notes that “even in this form, the T-80BVM is a very dangerous opponent for the enemy’s armored vehicles, including the most modern one”. In addition to the mentioned “Relic”, the tank received a modern multi-channel sight “Sosna-U” with automatic target tracking and a thermal imaging channel, as well as an understudy sight. This will allow firing shells and guided missiles at any time of the day.