Return of the US Navy Second Fleet

8 May 2018
18
September 30, 2011 in Norfolk, a solemn ceremony of the dissolution of the Second fleet US Navy. The command of the armed forces considered that the continued existence of this operational unit leads to excessive costs and impedes the further development of the fleet as a whole. However, a few years later the military leaders changed their minds. The other day, the re-establishment of the Second Fleet was announced, which is expected to increase the combat capabilities of the Navy in one of the most important areas of the World Ocean.


On the upcoming changes in the structure of the US Navy was announced 4 May. On this day, on the Norfolk base, aboard the aircraft carrier USS George HW Bush (CVN-77), events were held to change the leadership of the Fleet Command. The position of head of this structure is now occupied by Admiral Christopher Grady. During these events, various statements were made, including the most interesting ones, affecting future naval forces. Thus, the head of the naval operations, Admiral John Richardson, announced the future revival of the Second Fleet.

The admiral noted that at present in the Atlantic Ocean there is a new rivalry between the leading states of the world. The changing situation requires appropriate decisions, and for this reason, the command of the Navy intends to re-create one of the previously existing operational units. The tasks in the North Atlantic and surrounding regions in the near future will be entrusted to the newly formed Second Fleet. 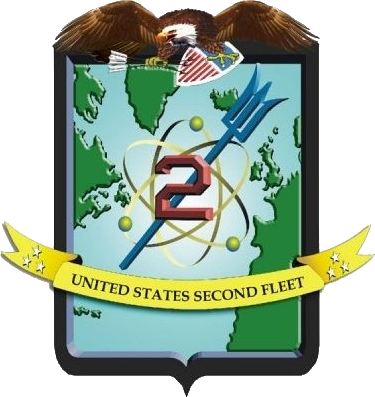 In the foreseeable future, the leadership of the army and navy will have to resolve several basic issues directly related to the organization of the fleet. It is required to find a new base for it, form a command and determine the composition of the future ship group. According to J. Richardson, the commander of the new Second Fleet will be selected in the next few weeks. The base for the fleet will be chosen no later than the beginning of the next autumn. Around the same period will solve other pressing issues.

The admiral also touched on the topic of costs and efforts required to rebuild the operational fleet. He stressed that from the point of view of the command and control structures, this formation will not differ from others, and therefore will be able to effectively solve the tasks. In addition, the command intends to focus on efficiency, which is expected to do without unnecessary costs. The result of all these expenses and efforts will be the growth of the capacity of the US Navy in the northern Atlantic Ocean.

A little later it became known that the naval command had already prepared a memorandum on the restoration of the Second Fleet, and this document was signed by Secretary of the Navy Richard W. Spencer. According to the memorandum, the resurgent fleet will allow the naval forces to respond to new challenges in a constantly changing environment faster and more efficiently. At the same time, the staff of the future command is already determined, who will manage the fleet.

According to current plans, initially the command of the Second Fleet will include 11 officers and 4 military personnel. Later the staff will be increased. The final composition of the command will include 85 officers, 164 sergeants and privates, as well as 7 civilians. The approximate start date of such a command is July 1.

The ship composition of the future Second Fleet has not yet been determined. According to some estimates, it may be decided to restore the compounds disbanded or transferred to the jurisdiction of other fleets in 2011. At the same time, the first reconstructed fleet will receive ships, ships and submarines from other formations, and then deliveries of completely new combat units may begin. However, official information on the exact or estimated composition of the Second Fleet has not yet been announced.

It should be noted that the imminent reconstruction of one of the previously disbanded operational fleets is not a complete surprise. Discussion of such opportunities began a few years ago, but so far remained at the level of conversations. However, some assessments were expressed by high-ranking representatives of the naval forces, which gave them weight, although they did not convert them to the category of official plans. It is curious that the reason given for the formation of the new fleet was fully consistent with the current state of affairs in the international arena.

In fact, the main reason for the current decisions is the current development of the navy of Russia and the growing influence of Moscow in the world. The Russian fleet is regaining its presence in various parts of the world, including in the North Atlantic. As was repeatedly noted in the past, and as recent decisions confirm, one of the main responses to the activity of the Russian Navy could be the re-establishment of the Second Fleet.

From the American point of view, the situation in the Atlantic Ocean has gradually deteriorated in recent years. So, in 2016, the commander of the Sixth Fleet, Admiral James G. Foggo-third, wrote that the United States and Russia had launched the “Fourth Battle of the Atlantic”. Expanding this thesis, he pointed to the intensification of Russian submarine forces in the Atlantic Ocean. Submarines tested the American defense, challenged the US Navy and prepared for a difficult naval battle. The purpose of these actions is to gain advantages in a hypothetical conflict. Admiral Foggo believes that the threat is represented both by the potential and actions of the Russian fleet, and by the political course implying a challenge to the United States.

Not so long ago, theses of JG Foggo-third about the underwater confrontation between the USA and Russia was developed by another specialist. A few days ago, The Washington Post published the assessments of Brian McGrath, the former commander of the US Navy destroyer, and now the deputy director of the Center of American Seapower at the Hudson Institute. He appreciated the possible goals and objectives of the revived Second Fleet, and above all touched on the topic of anti-submarine defense.

B. McGrath noted that the number of Russian submarines capable of operating near the shores of the United States is not too large, and the new Second Fleet will be able to deal with this problem. However, the threat remains. So, the nuclear submarines of the project "Ash", using hypersonic anti-ship missiles or weapon with nuclear warheads, will be able to attack any city of the East Coast, which are within their range. In addition, Russian submarines can organize minefields and use anti-submarine weapons. This will complicate the deployment of American forces or the provision of assistance to friendly countries.

According to B. McGrath, the main efforts of the new fleet should be directed to the search for and possible destruction of submarines. This requires ships with the appropriate equipment and weapons, anti-submarine patrol planes like the P-8 Poseidon and other equipment. It should be noted that the deputy director of Center of American Seapower and the former commander of the ship did not touch on the subject of other areas of the future fleet's combat work.

There is reason to believe that the formation of a “new” fleet is unlikely to lead to serious negative consequences for Russian operations. The ships of the new formation are to work only in a relatively small area near the US Eastern coast, where only limited activity of the Russian Navy takes place; mainly its underwater forces. It should be borne in mind that in recent years, the future zone of responsibility of the Second Fleet did not remain unprotected, since it belonged to other fleets.

Thus, from the point of view of the Russian military policy, the new decisions of the Pentagon are unlikely to have serious consequences, and they can not be considered as a real threat. However, statements about the revival of the previously disbanded fleet in connection with the “Russian aggression” do not look very pleasant and once again confirm Washington’s unwillingness to establish friendly relations with Moscow. 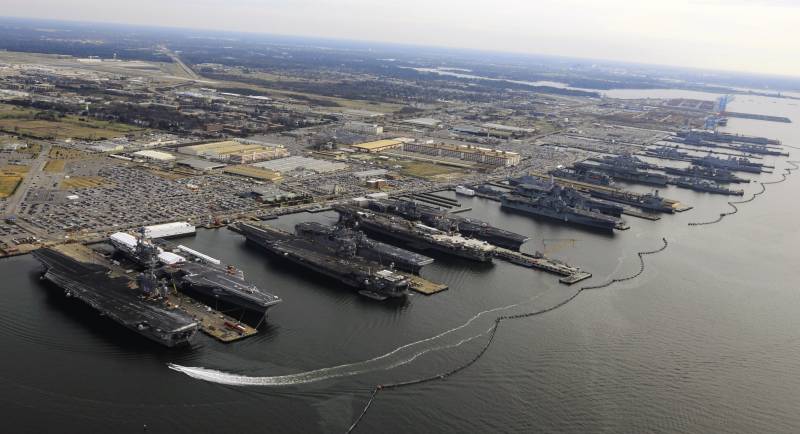 According to recent data, by the end of the year, the United States Navy will have a new operational fleet, which will have to deal with threats in the North Atlantic. The main features of this formation are either not yet determined, or have not yet been announced. However, the command of the American fleet is fairly open information policy, and new messages on the progress of work may appear in the near future.

Recall that the US Second Operational Fleet was one of the results of the post-war reform of the naval forces. At the end of the forties, the Eighth Fleet was formed, becoming the Second in 1950. Initially, this operational unit was responsible for all the waters of the Atlantic Ocean, as well as for part of the Pacific and Arctic. Subsequently, the area of ​​responsibility of the fleet changed, and part of its waters was transferred to the management of other fleets. By the beginning of this decade, the Second Fleet was responsible only for a relatively small area of ​​the Atlantic near the American coast. Other areas transferred to the Fourth and Sixth Fleets.

During the existence of the Second Fleet, his ships, in addition to constant campaigns, duties and exercises, managed to take part in several real operations. The first major fleet operation was the blockade of Cuba in the early sixties. Later, fleet ships participated in the operation of Urgent Fury and provided ground operations in Grenada. Also, about half of the ships involved in the Desert Storm operation belonged to the Second Fleet. Several times the fleet solved humanitarian tasks. So, in 2010, a large ship and aviation the group was sent to Haiti to help the victims of the earthquake.

At the beginning of this decade, the command of the US Navy came to the conclusion that it was necessary to reform the structure of the fleet and abandon one of the existing formations. The existing Second Fleet did not meet the new requirements, and therefore in 2011, the decision was made to disband it. The bases and formations were transferred to other fleets or to the direct subordination of the Fleet Command.

Before disbandment, four naval bases were assigned to the Second Fleet; The main forces stationed in Norfolk. In the last years of its existence, the fleet consisted of 5 aircraft carriers, 6 submarines with ballistic missiles, more 25 multipurpose nuclear submarines, 6 missile cruisers, over 20 destroyers, 15 landing ships, as well as patrol ships and boats, minesweepers, etc. The command had at its disposal a large fleet of support vessels.

In the near future it is planned to form a new command of the Second Fleet, as well as to determine its future bases and ship composition. The area of ​​responsibility and the approximate tasks of the formation are already defined, and all other issues will be solved with this in mind. The basic plans have already been approved, but the Pentagon still has to resolve several critical issues. Which ships and submarines will protect the East Coast from a probable enemy, in which ports they will be based, and how the command organizes their work will be known later.