"Anachronism", which is so lacking! 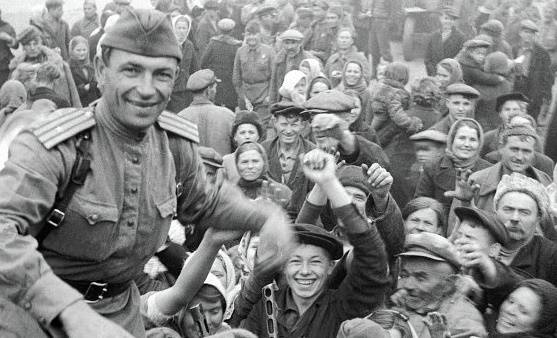 Another Victory Day and ... another stream of the unconscious from our homegrown ignoramuses. For example, such a “patriotic” poster, supposedly evoking the brightest civil feelings. 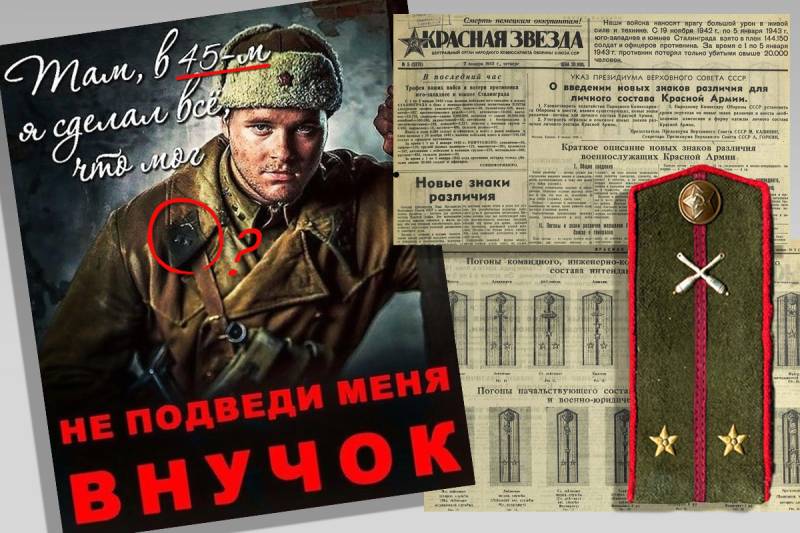 But this is fake! For the simple reason that its authors simply do not own the theme that they are trying to beat, so to speak. The poster is about 1945, the victorious year, and the lieutenant of the Red Army depicted on it wears a military uniform of the 1940-1943 type, in which he could not finish the war in 1945. By that time, Soviet fighters and commanders had been wearing a new uniform with epaulets for almost three years.

At first glance, it seems to be a trifle. But in fact, such negligence in detail speaks of ignorance of the topic and the absence of the authors' right to draw any conclusions. The price of such agitation is zero. If not worse. Because distrust of the poor propaganda material gives the viewer a distrust of the topic itself. And the feeling that they are trying to deceive him.

I do not even rule out that such bases are specially organized on the very eve of a large national holiday so as to devalue its significance. Like, all this is a lie and a lie. You see, even on posters any nonsense is painted.

And it would be naive to think that such a planting of unbelief does not produce results.

Moreover, the matter is not limited only to illiterate pictures. Even more blasphemous technology of so-called fake veterans is being launched more often into the pre-holiday turnover. Within the framework of which, people of suitable (old) age are dressed in military uniform and hung with the most inconceivable "iconostasis" of orders and medals. Up to three stars of the Hero of the Soviet Union and a dozen orders of Lenin on one chest, which in itself literally screams that it is a hoax.

As a result, colorful rollers are walking on the Internet, where these false veterans with a crunch are brought to clean water. And the idea is being implicitly carried out that all the other still-living participants in the war are most likely the same deceivers, because the real front-line soldiers have long since died. Even older people with a seemingly correct world view are increasingly falling for this bait. Here is a good friend who wrote me about this:

“I have not believed in veterans for a long time. Who fought already gone. "

I had to put aside all the cases and refute this undue propaganda inspired by unwarranted pessimism.

“My wife's father is Leonty Kondratievich Ilyashevsky. He is now 93 of the year. He was drafted to the Red Army in the 1943 year on reaching the age of 18. He fought as part of the Red Army in 1944-45 in the calculation of the self-propelled anti-aircraft gun. Wounded during the Balaton operation in Hungary in March 1945. Now preparing for the holiday 9 May. ” 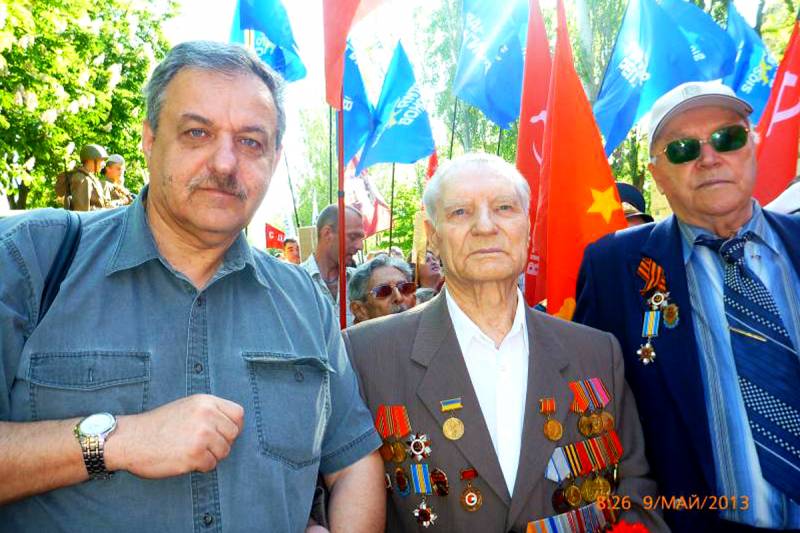 In this case, everything ended quite well. My interlocutor, having received such convincing evidence, did not insist that all veterans "left":

“Congratulations to the WARRIOR! I thank them very much for our life, for our peace, for the fact that we were able to understand life, thanks to them, and to the children to convey a lot. My dad was a WARRIOR. The whole family is proud! I remember from my childhood how wooden dentures creaked, how they all treasured life and peace. ”

But this история with the operational debunking of false stereotypes of perception of reality inspired from the outside is almost unique. In most cases, people who are deprived of undeniable evidence to the contrary are easily led to such things. And fakes quite successfully doing their job, giving rise to mass disbelief.

Why it happens? There are several answers. First of all, the colossal level of the fall of the general education of the population. And especially in terms of saving his cultural and historical code. That is, that which in former times was given extremely serious, if not paramount importance. By the way, in the same America so far. And let no one be deceived by the fact that the local “ideological department of the Central Committee of the CPSU” is called Hollywood. The purpose is essentially the same.

But with state ideology and its support at the level of specialized government agencies, things are, to put it mildly, unimportant. And if you call a spade a spade, then this topic is almost neglected. And, accordingly, it is lowered on the lowest, as a matter of fact, domestic level. Where everyone is free to sculpt what will come to his head. For example, such: 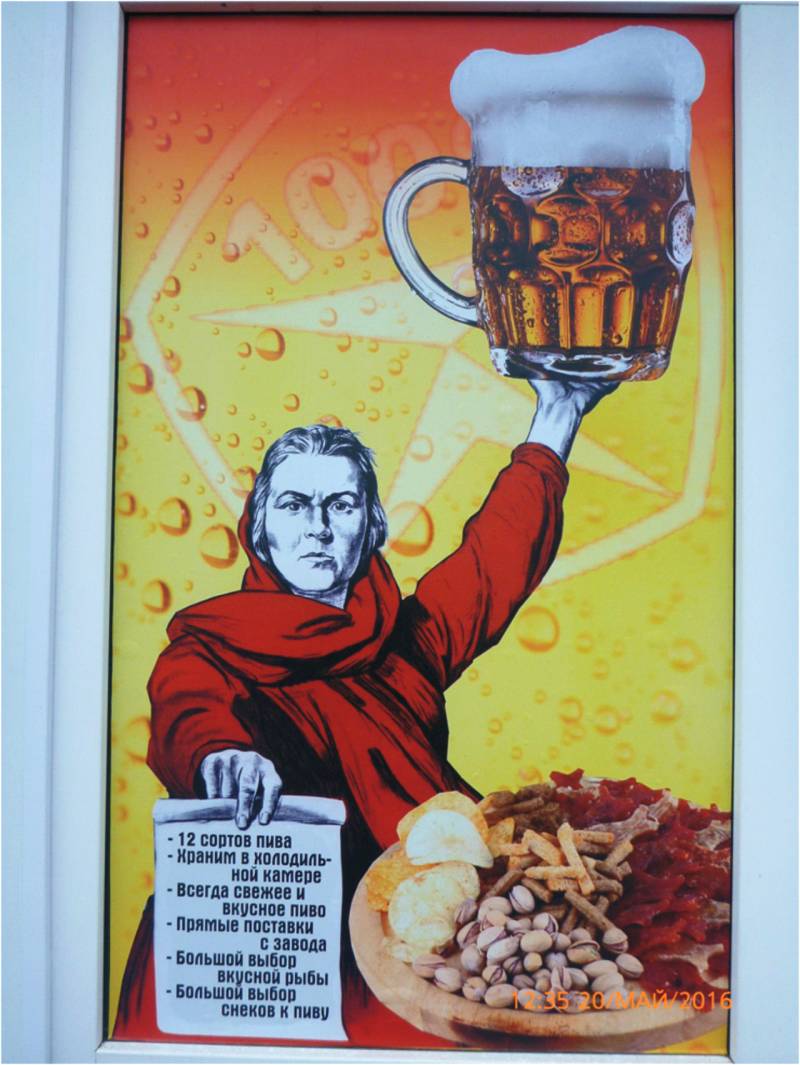 I note in passing that I did this photo not somewhere in a crazy Ukraine, but only a couple of years ago in one of the Moscow region cities.

Why couldn’t there have been such a thing before? Because any ideological product was considered as the most important strategic tool for influencing the public consciousness. In such a serious matter there could be no question of some kind of spontaneity, amateur work and dilettantism. Any work of this kind was monitored and coordinated at the highest levels. No exceptions allowed.

And again - an example from a personal biography. At the end of the 80s, I served in the Soviet Southern Group of Forces in Hungary. The local “European Democrats” actively opposed the so-called “Soviet occupation” and sealed the whole country with the malicious spiteful anti-Soviet posters “Comrades. The end! ”I felt very sad that the“ artistic image ”of these comrades was the swollen back of the head of a supposedly Soviet military man. And I had the idea to make a return poster, refuting this enemy slander. We were looking for a suitable type not for long. A soldier of the guard company headquarters Nikolai Antipov, somewhat similar to the actor Kostolevsky, approached immediately. And the poster with his kind smile and farewell address “All the best, Hungarians!” Was soon seen by the whole country. 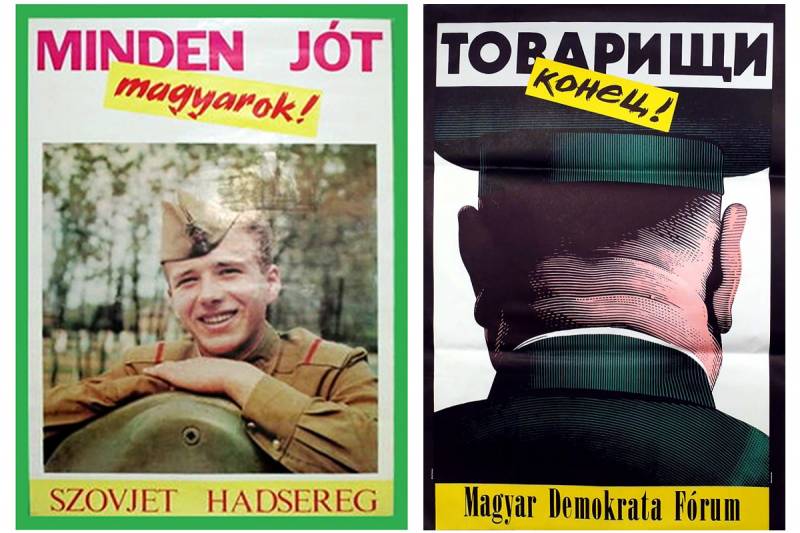 On the right is a poster of the Hungarian Democratic Forum “Comrades. The end! ”On the left - our answer to it

But what is important! Before this “propaganda material” went into circulation and was distributed throughout Hungary, it was sent from Budapest to Moscow, where it was carefully discussed and coordinated in a number of instances. And until each of them gave her “good”, there was nothing to think about the success of this venture. And even the print run of the poster was printed in Moscow and delivered to the YUGV by airplanes.

One may be ironic about the Soviet passion for reinsurance. I will say even more. To myself, a young officer who had already tasted the fruits of perestroika at that time, such super-vigilance of the center at that time also seemed excessive and archaic.

But at the sight of what the current ideological permissiveness, value omnivorousness and illiterate promiscuity led to, it often seems to me that it was then that everything in this area was done correctly. Because the mass consciousness is the very substance that underlies everything. And ideology is a very delicate instrument that requires jewelry tuning. And it is very bad when a vulgar hammer is used instead, with which stupidly hammer nails into our head. Especially if this hammer holds the hand of the enemy.

Ctrl Enter
Noticed oshЫbku Highlight text and press. Ctrl + Enter
We are
Situational analysis of the death of the MH17 flight (Malaysian Boeing 777), made on the basis of engineering analysis from 15.08.2014Results of the week. “In our cooperative, the board is always agreed”
Military Reviewin Yandex News
Military Reviewin Google News
112 comments
Information
Dear reader, to leave comments on the publication, you must sign in.