May 7 (April 25 old style) 1895, the Russian physicist Alexander Popov, at a meeting of the Physico-Chemical Society, demonstrated to the audience a wireless remote recording of electromagnetic oscillations from a lightning strike to an elementary receiver assembled by him. Over time, this date grew into the USSR, and later in Russia on Radio Day - a professional holiday for workers in all branches of communications and radio engineers. In the USSR, this date was first celebrated solemnly in the 1925 year, and, starting from the 1945 year, the holiday is celebrated in our country every year. 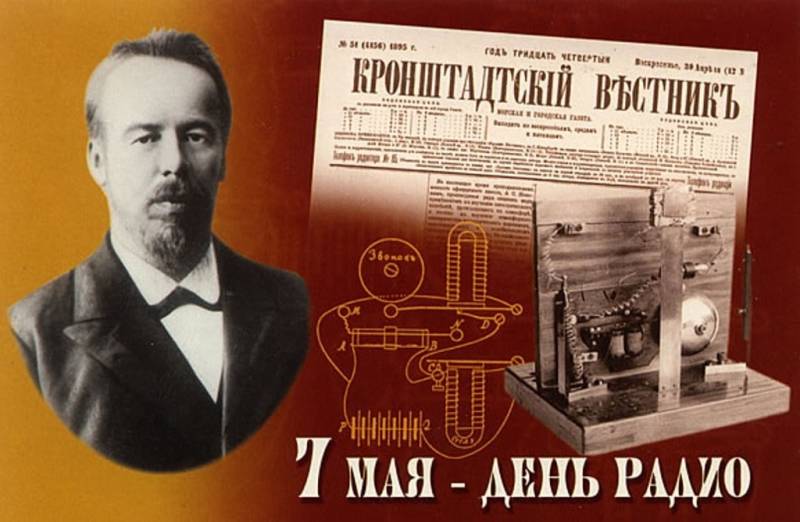 The radio invented by the Russian physicist Popov was immediately noticed by the Russian fleet. Radio had a revolutionary influence on the development of operational-tactical art, the combat control system and the improvement of communications on ships and in units of the navy. Popov's invention also formed the basis for a number of important areas of modern science and technology, which were in demand by the fleet and found wide application in the Navy. For example, radio navigation, radiolocation, radio intelligence and radio resistance to the enemy owe their appearance to radio.

In our country, the radio quickly gained prestige among the maritime command, which took vigorous measures to equip the coastal points and ships of the fleet with radio equipment, trained radio communications specialists. Already in 1900, in Russia, the naval ministry’s manager, Vice Admiral P. P. Tyrtov, issued a special order in which the decision was made to introduce wireless telegraph in combat ships as the primary means of communication.

It is curious that initially this type of communication, unconventional for that time, based on electrical phenomena, in the fleet was ranked as minefield, which was closest to electrical engineering. That is why initially the selection of specialists for radio communications was carried out exclusively from among the lower ranks and the officers of the mine service. Their training was first organized in the 1900 year in the Kronstadt mine classes. In those years, the ships were in charge of radio communications, most often mine officers, in the formations - flagship mine officers, on the coast - the main miners of the ports. 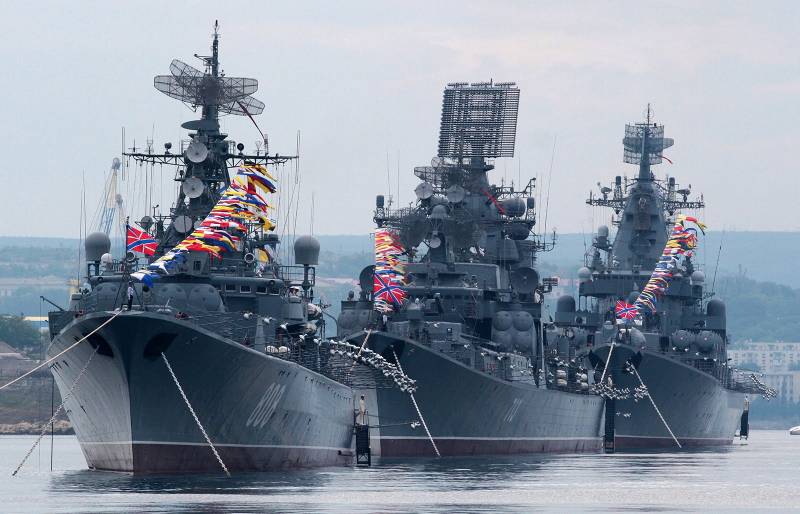 In the same year, 1900 in Kronstadt organized a radio workshop for the production, repair and improvement, as well as the installation of stations on warships of the Baltic and Black Sea fleets. At that time, these were spark transmitters and receivers, a significant part of which was a single-contact coherer. Further improvement of radio equipment went in the direction of increasing the possibilities of receiving by ear. It should be noted that the 6 day of August 1900, when Vice-Admiral S. O. Makarov, who was the commander of the Kronstadt fortress, approved the radio workshop staff and the composition of its equipment, can safely be considered the birthday of the entire domestic radio industry.

Over time, the role of the radio and radio engineering services in the fleet continuously increased, and the naval communications personnel and engineers became participants in all the wars in which our fleet took part in the 20th century. Today, the main tasks of the Radiotechnical Service of the Russian Navy include the work of the situation lighting system, installation, maintenance and operation of various radio equipment and equipment on warships, ships, fleet bases and establishments. At the same time, the radio service itself is today part of the Main Command of the Russian Navy.

The development and improvement of communication systems to ensure an effective command and control process at various levels: from the combat part of a ship or coastal unit to the command centers of the entire Russian Navy is a very significant task of the fleet radio engineering service. Today, it is difficult to overestimate the role of communication in the Russian Armed Forces and, especially, in the fleet, where the necessary information will be exchanged as accurately and efficiently as the success of the assigned tasks depends. In this case, the distance between the ships in the ocean, can reach thousands of miles. Coordination of operations of fleet units is largely ensured by the reliability of radio equipment and the presence of a stable connection between ships and coastal facilities.

The importance of the role of various radio equipment available to Russian seamen today and communications is emphasized by the fact that one of the tasks of this and other services of the Russian fleet is to protect their own radio systems and communication channels with simultaneous efforts aimed at disrupting the operation of similar communication systems. the adversary. In order to improve the performance of the Russian Navy’s RTS, naval units and subunits and naval ships regularly conduct exercises and gatherings of radio-technical units.

For a long time, radio engineering specialists for the Russian Navy have been trained in the Leningrad Region. Until 2010, Peterhof had a higher military educational institution that trained radio engineering specialists for the needs of the Russian fleet - the Higher Naval School of Radio Electronics named after AS Popov. This university was the first independent higher education institution in Russia engaged in the preparation of highly skilled specialists in communications and radio engineering for the Navy of the country. 1 July 2012 after the merger of the Naval Engineering Institute with the Naval Institute of Radio Electronics named after A. Popov, the Naval Polytechnic Institute was established, whose educational buildings are located in Pushkin and Peterhof. Today, high-class telecom operators and RTS specialists are still being trained for the Russian Navy.

7 May “Military Review” congratulates all telecommunications operators and specialists of the radio engineering services (RTS) of the Russian Navy, all those who today continue to serve in ships and onshore facilities of the Russian fleet, as well as all those who were once associated with these specialties , especially veterans of World War II, with their professional holiday.

Ctrl Enter
Noticed oshЫbku Highlight text and press. Ctrl + Enter
We are
Su-57 and dancing with the wallet
Military Reviewin Yandex News
Military Reviewin Google News
18 comments
Information
Dear reader, to leave comments on the publication, you must sign in.