You are friends with the Russian - keep the ax in the bosom!

7 May 2018
202
The recent crises clearly showed only one thing: we really begin to be interested in what is happening with our neighbors only after they overthrow the pro-Russian government. This was the case even with Ukraine, one of the largest and, for many reasons, our most important neighbor. I keep silent about Armenia in general: we remembered it only during the next aggravation of the crisis around Nagorno-Karabakh or when the next interstate agreements "on friendship, cooperation and Russian sponsorship" were signed. 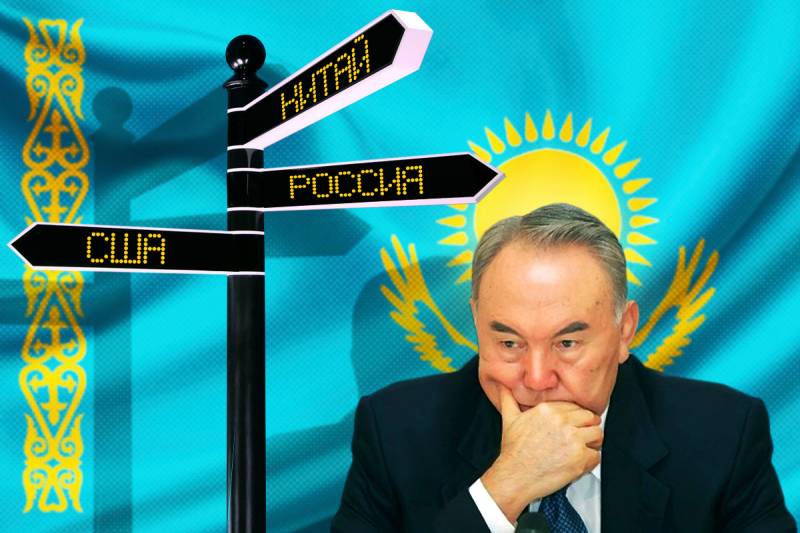 Well, not being a completely stupid person, I decided to ask what is being written in the Kazakh media about the latest events in our “almost cloudless” relations. Without pretending to the total coverage of all the media that spoke on the topic, I still saw a lot of interesting and instructive.

For example, did you know that the Kazakhs have a saying: you are friends with the Russian - hold the ax in the bosom?

So I did not know. I am not sure that most Kazakhs have heard about it, but the Kazakh-language portal Qamshy.kz knows and remembers about it, which it did not fail to remind its readers. Just in case, I will clarify: I don’t know Kazakh, and I’d not vouch for the accuracy of the translation. But the translator is another Kazakh edition, so this is hardly the machinations of enemies who want to embroil our friendly nations.

Even at the headline level, everything is pretty sad. “If a friend turned out to be suddenly ...” - this is about friendship with Russia, which was suddenly under sanctions because of its “aggressive behavior”, it quarreled with the whole world, and now only Venezuela, Syria and poor Kazakhstan are among its allies. And is it worth this proud, independent, self-sufficient and very sovereign state to maintain such a high level of relations with Russia? Shouldn't the degree be reduced to the usual, quite friendly, but still purely trade and economic cooperation without any political overtures there and obligations?

Or do you like the following heading: “The EAEU does not bring benefits to Kazakhstan, but there is a way out.” In the article, the author, deftly postulating the futility of the EEU for the Republic of Kazakhstan, presents his thoughts on how this could be corrected. And what is remarkable, it all boils down to the need to strengthen cross-border relations, which, in the author's opinion, should become the engine of positive growth in trade. In between times, the figures of the terrible Russian domination are cited: Russia exports to Kazakhstan much more than it imports from there. And generally speaking,

the northern neighbor, trapped in the grip of sanctions, is looking for new markets for its products and sees Kazakhstan only as such a market and its raw materials appendage.

Reading this, it is very difficult to understand what the main thing in the article is: strange recipes to intensify trade and economic cooperation or the implicitly promoted idea that this cooperation is initially unfair, wrong, unprofitable, and it needs to be either greatly changed (in favor of Kazakhstan, of course) or even lower it to the level of border areas, unleashing Astana’s hands for “multi-vector” relations.

By the way, about multi-vector. Did you, dear readers, know that multi-vector policy has become a real new idol for Kazakhstan? This word is found in the Kazakh media so often and is used so unexpectedly, with some kind of even sincere naivety, that it starts to have a strange, slightly depressing impression on us, “Putin's propagandists”.

For example, the case with the voting of Kazakhstan in the UN is being investigated. The author writes something like: yes, first we voted for the American resolution, then for the Russian one, and then abstained - we have a multi-vector approach! I am exaggerating a little, but in no way violating the essence: “multi-vector” for Kazakhstan has ceased to be a political tool, turning into a self-sufficient ersatz of the national idea. And the Kazakhs themselves seem to be so accustomed to this, that they completely justify at times their foreign policy impulses and movements that are mutually exclusive with this multi-vector approach.

The reaction of the Russian media to the recent ratification by Kazakhstan of the agreement on American transit to Afghanistan through the Caspian ports of northern Kazakhstan did not go unnoticed in Astana.

Vladimir Solovyov, who dared in his program “Sunday Evening with Vladimir Solovyov” in an impartial spirit, speak out against “who does not want to keep up with Moscow sovereign Kazakhstan” is considered the instigator of the “anti-Kazakh hysteria in the Russian media”.

And since Vladimir Solovyov, according to Kazakh analysts, without instructions from the Kremlin “does not say a word”, the critical wave that struck Kazakhstan and Elbasy personally is a well-coordinated hysteria of “trained Russian media”, aimed at hinting the latter transparently, how unhappy they are in the Kremlin.

The CSTO allies are not going to get into the trenches with Russia. Including the most serious of them - Kazakhstan.

Frankly, I am not sure that Kazakhstan is such a serious military ally, but otherwise this assessment is not far from the truth - apparently, there are really few people who want to be with us in one trench. And it is unlikely that someone from those who pray for their “multi-vector” nature will be persuaded by a Russian saying about two birds with one stone.

And this, whatever you say, is sad. Although not new: about the only allies of Russia, we already know a half hundred years.

Still, some of the Kazakh media headlines instill restrained optimism in the Russian reader. For example, this: "Kazakhstanis choose the ruble." And even understanding with the mind that this does not guarantee us anything, it still gets a little warmer in the heart.

Still, it must be stated: the situation in Kazakhstan is rather alarming from the point of view of Russia's geopolitical interests. The process of rejection of Astana from the Russian Federation has already been launched, and it is far from a fact that the “soft power” of Russia at least this time will be able to get the best of the “cookies” of the US State Department.

Ctrl Enter
Noticed oshЫbku Highlight text and press. Ctrl + Enter
We are
About Stalin and KhrushchevWhat you didn't want to know about England
Military Reviewin Yandex News
Military Reviewin Google News
202 comments
Information
Dear reader, to leave comments on the publication, you must sign in.