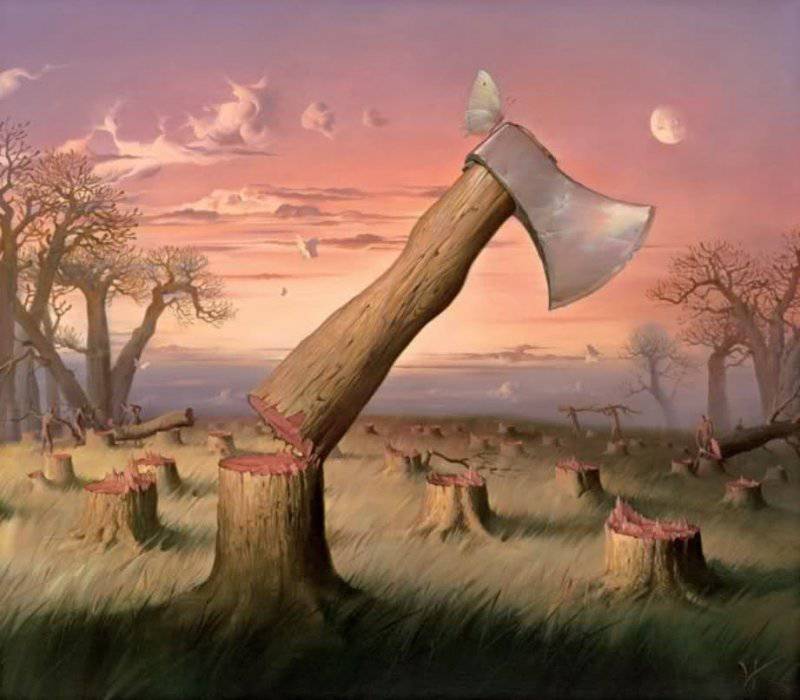 For all the attempts of Ukraine to put all the dots above "i" in stories with the armament of Georgia, it remains a lot of dark spots. Moreover: as you know, Tbilisi is trying hard to preserve Kiev’s image of a “military-technical friend”, despite the latter’s unwillingness to play this role.

It would seem that in February of this year, the Ukrainian authorities put all the accents. As we remember, then a considerable resonance was caused by the statement by the Ukrainian media of the Vice-Premier and State Minister for European and North Atlantic Integration of Georgia Georgy Baramidze that “Ukraine continues to supply weapon Georgia and fulfills its obligations to service the equipment supplied earlier. ”As Baramidze clarified then, the current Ukrainian government does not share Russia's position that such supplies exacerbate the situation in the South Caucasus region.

Kiev then reacted with lightning speed. Immediately, a statement by the management of the information policy of the Ukrspetsexport Group of Companies was circulated, stating that for about two years Ukraine and Georgia have not cooperated in the provision of goods and services for military and special purposes. The companies stressed that they are carrying out military-technical cooperation with other countries in strict accordance with the international obligations of Ukraine and under the control of the State Export Control Service (SSEC). In turn, GSEK, which controls all deliveries of Ukrainian weapons abroad and issues the relevant permits, confirmed the information from Ukrspetsexport. According to the press service of this structure, for about two years, exporters have not applied to the ministry for permission to supply weapons to Georgia.

It seems that everything is clear, but already a month later, in March of 2012, the story of the supply of Ukrainian weapons to Georgia was again pulled to the surface, and this time with a clearly corrupt smell. Then the resonance received a secret message, published on the WikiLeaks website, which said that the American diplomat, then US Under Secretary of Defense for International Security (by the way, from February 15 2012 - NATO Deputy Secretary General) Alexander Vershbow made in Georgia and Ukraine five visits in less than three months. And also the words of the analyst Loren Goodrich are stating that with the help of Yushchenko, Vershbow intended to “do some great things in Ukraine”.

In this regard, the head of the Verkhovna Rada Commission on Verifying the Legality of Arms Supplies to Georgia, created in 2008, People's Deputy Valeriy Konovalyuk said that the new information about Ukraine’s arms supplies to Georgia, published on the WikiLeaks website, confirms its numerous statements about the illegal actions of the previous government in these matters which were carried out under the control of the West. The people's deputy reminded that all the materials of the temporary investigation commission of the parliament to investigate the supply of arms to Georgia that he had identified in 2008 were then transferred to the General Prosecutor’s Office of Ukraine. “The documents collected by our commission prove that financial frauds related to the supply of arms to Georgia were personally patronized by Yushchenko. In connection with these supplies, the national budget suffered losses of hundreds of millions of hryvnias. There was damage to the defense of the Ukrainian army. Georgia has not paid for the supply of Ukrainian weapons until the end, ”Valery Konovalyuk reminded. “Every year this history has more questions. Therefore, I remain unconvinced - there is no time limit for such cases. The crime cannot remain without punishment, and the General Prosecutor’s Office should put an end to this issue, ”said Valery Konovalyuk.

Thus, on the one hand, Yushchenko’s prosecutors received yet another confirmation that the increased arms trade with Georgia smelled strongly of fraud. On the other hand, it remains unclear where all the money received from it went: it was claimed that Kiev received at least 2 billion from sales, while the Ukrainian budget included only 200 million from them.

However, there is one oddity in this story. The Konovalyuk Commission handed over to the prosecutor’s office the investigation materials for which, as far as is known from official releases, “several” about criminal cases were initiated (according to some information, more than a dozen). However, in the 4 of the year, only one of them got into the court - the company Parallax scandal involved in 2010, which the General Prosecutor's Office suspected of involving the Ukrainian and Georgian military in the deal, in the Economic Court of Kiev proved that in 2005, she sold Ukroboronservice missiles ( then they were sold to the Georgians) legally. Where are the rest of the criminal cases, today is not clear, and this nebula causes legitimate bewilderment.

Regarding the February statement of Baramidze, it is worth remembering one more fact - namely, that in the Ukrainian parliament, more precisely - its core committee, the Georgian side took the statement quite calmly, and even assented. So, member of the parliamentary committee of the Verkhovna Rada on foreign affairs, Andrei Paruby, said on this occasion: “The sale of weapons to Georgia is a normal practice, because Georgia is not included in the list of countries where arms exports are prohibited,” he said. “We remember how the Party of Regions blamed President Yushchenko for this, built a whole campaign, including the presidential election. But today everyone is silent, everything is normally perceived. This once again shows the hypocrisy of this power, Yanukovych, ”noted Parubiy. “Naturally, Ukraine is interested in selling its weapons profitably. And it is absolutely normal that we do this. It brings income, Georgia is a friendly country. But the Party of Regions once again showed that the ideology for it is an absolute farce, ”the deputy concluded. Whether this statement is indirect evidence that Ukraine continues to supply arms to Georgia is up to the reader.

Now, as for the military-technical cooperation of Ukraine and Georgia. The dynamics of sales of Ukrainian weapons to Tbilisi, according to the UN, was as follows. In 2005, contracts were signed between Ukrspetsexport and the Ministry of Defense of Georgia for the supply of Georgia to OCAM-AKM air defense system (1 battery) and BUK-M1 air defense system (1 division) after repairs were made in Ukraine; 36D6 radar (3 units); Kolchuga-M radio electronic intelligence stations (3 comp.); Mi-24 type helicopters (3 units) after repair in Ukraine; supply of equipment and work on the creation of the TsKP (Central Command Point) of the Armed Forces of Georgia.

In 2006, Ukrainian exports consisted of 6808 anti-aircraft missiles and launchers, as well as 21870 firearms.

In 2009, Georgia purchased the entire 5 Ukrainian BTR-70 from Kiev.

In the 2010-2011, there were no arms shipments, according to the UN Register, there is no information on contracts in 2012 either.

But here it is worth remembering one “but”: the data that the UN publishes in its annual reports on the arms market are compiled according to the data provided by the powers themselves. There are no special mechanisms or structures that could control the accuracy of this information, the United Nations. And here Kiev is driving itself into a deaf deadlock, let us understand in every way that it does not provide the international community with full information on the supply of its weapons.

In particular, such a major puncture occurred when Ukraine began to refute the data of the Stockholm SIPRI Institute on arms sales to Kiev in 2010-2011. They say that SIPRI underestimates our trade volumes several times, indicating a little more than 200 million dollars instead of having a place 1 billion, because it takes into account only current contracts, and we have a lot of weapons supplies and the provision of repair and maintenance services under past contracts.

It would seem, what's the problem? It is necessary to publish the entire list of services provided and weapons sold, and the dispute will be settled, and at the same time clarity will be brought into the question regarding the current military-technical cooperation with Georgia. However, Ukraine is in no hurry to do it. And it is strange. If everything is clear in the contracts, where does this super secrecy come from?

If you link the past "weapon affairs" of Kiev with Tbilisi and the current situation, a very interesting situation arises. So, Georgia says that military-technical cooperation with the Ukrainian defense-industrial complex is progressing well and with might and main in developing, and the Ukrainian authorities with all their might are denying this fact. At the same time, even if at the moment there are no deliveries of weapons, the question remains, who carries out routine maintenance, repairs and supplies of components to the Ukrainian weapons previously supplied by the Georgian military? Usually, and especially when it comes to large quantities of weapons, all this is provided for by multi-year contracts, in which the suppliers themselves are primarily interested, since this gives not a one-time sale income, but a multi-year stable profit.

The behavior of the Ukrainian Prosecutor General’s Office is also unclear, which undertook to investigate the schemes for the supply of Ukrainian weapons to Tbilisi, but suddenly stopped short of something and has an intriguing silence of 4 for a year, except for one completely failed case. But the investigations into these criminal cases would give exhaustive information about the mechanisms of arms sales to the Georgians. And recent documents published by WikiLeaks confirm: yes, there were such frauds! But Ukrainian investigators do not stimulate this.

It is clear that such a lowering on the brakes of these criminal cases may be necessary only to those who themselves have turned these frauds (or turns them?). After all, the power in Ukraine has changed, but many of the key posts in the defense industry remained the same people, and, of course, new people do not always want to give up their previous contracts and profitable schemes.

And finally, the last. No one has canceled the widespread when trying to conceal the supply of weapons to a country (and even more so when international sanctions do not apply against it, as is the case with Georgia) of sales through third countries. The so-called “end-user certificate” is a good thing, of course, but far from always effective. And nothing prevents Kiev from continuing to sell arms to Tbilisi through these third countries.

Therefore, it seems, the history of the Ukrainian-Georgian military-technical cooperation is far from over. There are too many dark spots and oddities in it.