Consumables of the American War

5 May 2018
38
The Eastern European countries of NATO are forced under US pressure to pursue policies that threaten their own security. 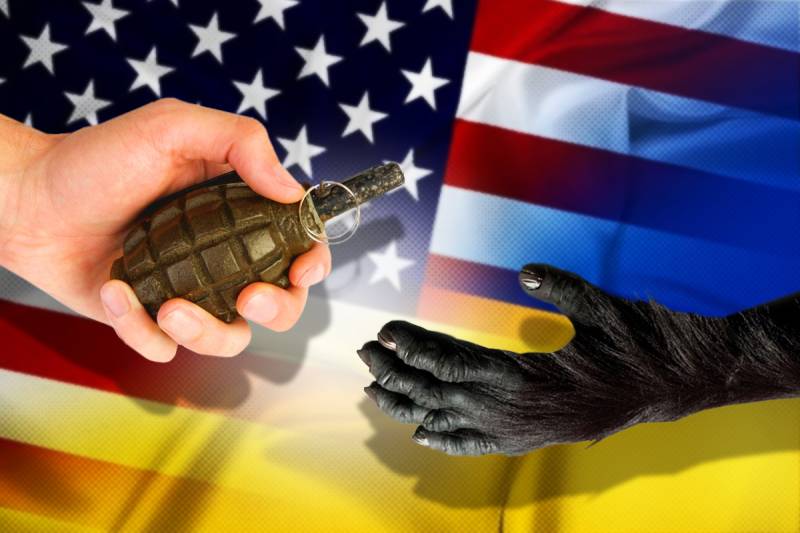 At present, the so-called "Armed Forces of Ukraine", which in reality are illegal gangs of the illegitimate Kiev regime, have practically exhausted the internal resources of building up their combat capabilities. This is especially true for sophisticated weapons and military equipment, such as Tanks, self-propelled artillery, infantry fighting vehicles, helicopters and airplanes.

The figures voiced in Kiev, according to which two thousand tanks and other armored vehicles could be thrown into the new offensive in the Donbass - this is practically everything that we managed to scrape together at Soviet storage bases and somehow, cannibalized, to repair. This amount is barely enough to conduct one major military operation, after which the “Ukrainian army” will inevitably be left with nothing.

Due to the internal production capabilities of the regime, this problem cannot be solved. Suffice it to say that in the four years of the “patriotic war”, Ukraine was not honored to build a single new combat aircraft, and the release of new tanks for its own army barely reaches ten vehicles a year.

The American curators of Kiev, who are extremely interested in maintaining and increasing the combat capability of the "Armed Forces of Ukraine", are certainly worried about this situation. However, in view of the serious military-political risks, they are afraid to solve this problem by direct military supplies of modern NATO weapons to Ukraine. Even an almost symbolic action with the transfer to Kiev of a very limited number of American anti-tank Javelin complexes has been dragging on for more than a year.

Meanwhile, the US military leadership has already worked out a channel for the mass supply of weapons to problem regions according to the so-called gray schemes - through dummy individuals and legal entities. Moreover, such weapons, which can not be identified as Western. The main base of such supplies are the former member countries of the defense union of the socialist states - the Warsaw Pact, as well as some ex-republics of the USSR. So, for example, a week ago, Syrian troops seized from the militants in the Damascus area T-72 tanks, which were previously in service with the army of Kazakhstan. Moreover, the militants themselves confirmed that this equipment was transferred to them by representatives of the US Army. But the bulk of Soviet-style armament was acquired by the US military in Eastern European countries, such as Bulgaria, Romania, Poland, Slovakia, etc.

Today, along with Syria, these streams of weapons are increasingly actively canalizing towards Ukraine. It seems that it is in this way that Washington plans to contribute to the Kiev regime in addressing the growing shortage of heavy military equipment. Moreover, at present it is already possible to say that such supplies are beginning to acquire a massive character.

Just a month ago, a leak occurred in the Ukrainian media, which, in the heat of the dismantling of their owners, had given out information about supplies of several hundred infantry fighting vehicles BMP-1 to Ukraine. This armored vehicle was received from the warehouses of the Czech army, then repaired at one of the Czech factories and transported to Ukraine.

In early May, the well-known western edition of "Jane's Defense Weekly" reported on the further development of this topic. This time we are talking about the massive supply to Ukraine of self-propelled artillery installations 2С1 "Gvozdika" from the stocks of the Polish armed forces. The mentioned SAU must also be pre-repaired at the same Czech company.

Both of these information leaks related to Ukraine took place within the framework of the same “gray scheme” of supplies. What gives grounds to assume that there are other similar schemes in which the secrecy regime is better observed and about which we, respectively, know nothing. Thus, it is quite possible to assume that the actual volume of arms supplies to the Kiev regime, including heavy types of military equipment, is much higher than that seen in the media in terms of quantity and nomenclature.

Given the fact that Kiev’s military-political activity is fully and comprehensively controlled by the US government, it is impossible to imagine that massive arms deliveries to the conflict region could be carried out without the knowledge of Washington. It is obvious that it was with his submission, and perhaps in other cases under his pressure, that the governments of a number of countries in Eastern Europe are forced to sanction such dangerous acts.

Why dangerous, too, is quite understandable. The Ukrainian conflict, which is tightly connected with the global geopolitical confrontation of the leading powers of the world, is unpredictably explosive. And in the case of its escalation, the countries closest to Ukraine are naturally the most threatened. To the west of the Ukrainian border are the countries of Eastern Europe.

The ones who today, either of their own free will, or under pressure from the United States, are beginning to increasingly cover Ukraine with weapons. That is, in fact, kindle a fire of war in this country. That same war, which, if it continues to grow, will inevitably strike primarily in these countries. In addition, small and fragile enough.

In terms of logic and common sense, Eastern European states should be the last to be interested in such a development. But in fact, it turns out that they contribute to this even more than the United States, because not so much American, but precisely Eastern European weapons enter the Ukraine.

It turns out that the governments of these countries in one of the most sensitive issues for their national security pursue a policy diametrically opposed to their own security. It is unlikely that they would understand the danger for them to further instigate the war in Ukraine. And they did it on their own initiative, for some very small money.

It is quite obvious that they are forced to do so because the United States demands this from them. Those who do not just give a damn about the security of Eastern European countries and Europe as a whole, but would very much like to see a more active role of this continent in advancing American interests as far as possible to the East. What the United States can achieve only by direct involvement of the local states in the ongoing war in Ukraine.

But if everything is more or less clear with American interests and actions, that they harmoniously coincide, then with their European class, everything is strictly the opposite. It turns out that they are not their own masters and have only one right - to fulfill the will of their overseas master as quickly as possible. Even in those cases when for them it is fraught with the saddest consequences. There is simply no other fate for the expendable material of world geopolitics.

Ctrl Enter
Noticed oshЫbku Highlight text and press. Ctrl + Enter
We are
The tragedy of the American army ("The Atlantic", USA)Situational analysis of the death of the MH17 flight (Malaysian Boeing 777), made on the basis of engineering analysis from 15.08.2014
Military Reviewin Yandex News
Military Reviewin Google News
38 comments
Information
Dear reader, to leave comments on the publication, you must sign in.