Su-30CM destroyed the bird flock. What is wrong with this version?

3 May 2018
170
Today is a mournful day for the VKS of the Russian Federation: not only the Su-30CM fighter is lost, but also two pilots who, according to the release, attempted to save the car. According to one of the versions, the crew did not have time to eject, since "the height was insufficient."


This version looks rather strange, as for modern aircraft there are cases of leaving the side and at “extremely” low altitudes. In fact, ejection from the Su-30CM is possible at zero height and speed.

Currently there are no official data on the causes of the catastrophe, however, a version of the Defense Ministry of the Russian Federation was stated that the cause was not related to weather conditions (they were ideal for flight), and may be related to a large bird entering the fighter engine.

The main question that arises when taking this version into account is with the experts: if a bird hit one of the Su-30CM engines, which did not allow it to continue full-time work to another engine, because if at least one of the engines would continue to work normally, then the aircraft can was put on the airfield "Hmimim."

Failure of another engine may be due to several reasons. One of them experts call the destruction of the engine, which could get a bird - the destruction and the occurrence of debris could lead to an explosion of one of the ammunition, and, as reported in the defense department, the plane was raised from an air base with ammunition.

This may explain why the pilots did not take measures to eject. The failure of the second engine could be connected with the situation when he himself was struck by fragments of the engine “fellow”.

This does not exclude the option of hitting the aircraft in a flock of birds. Although the latest version looks dubious given the fact that the Hmeimim has implemented the bird-repelling system typical for the Russian Aerospace Forces, and over the sea, as shown by numerous pictures of the Mediterranean coast of Syria, large concentrations of birds on this sunny and hot day (the air temperature on the coast today reached to + 32 Celsius) was not observed. 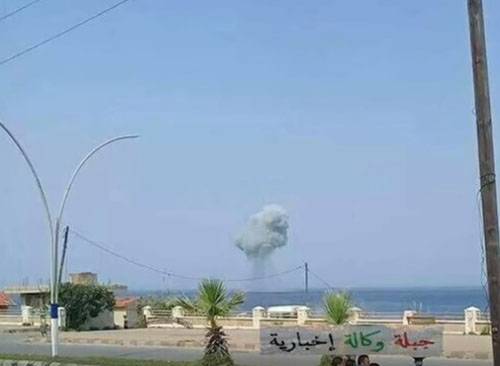 Against this background, certain media published statements by eyewitnesses who took the same shot with a pillar from the explosion that resulted from the incident with the Russian fighter. If you believe the statements of eyewitnesses, the plane several times lurched and could fall earlier, but the pilots at least two times were able to level the plane, leading it towards the sea. It turns out that this testimony negates the version of the explosion of ammunition on board as a result of the possible spread of engine debris and the death of the pilots before the fighter crashed. On the other hand, if the plane had already been led in the direction of the sea, was it rational for the crew to try to align the Su-30CM, which had fallen into the water, and deliberately refuse to use the catapult?

Experts note that these contradictions and the mutual exclusion of versions may indicate that there is another real reason, even to the failure of the control system on board, which for some reason made it impossible for the pilots to eject. In any case, it remains to wait for the official version of the reasons for the loss of the aircraft and crew.
Ctrl Enter
Noticed oshЫbku Highlight text and press. Ctrl + Enter
We are
Military Reviewin Yandex News
Military Reviewin Google News
170 comments
Information
Dear reader, to leave comments on the publication, you must sign in.