3 May 2018
46
The press service of Huntington Ingalls Industries, which is building a new aircraft carrier for the US Navy, announced that it was ahead of schedule to build the ship John F. Kennedy (CVN 79), Warspot reports. 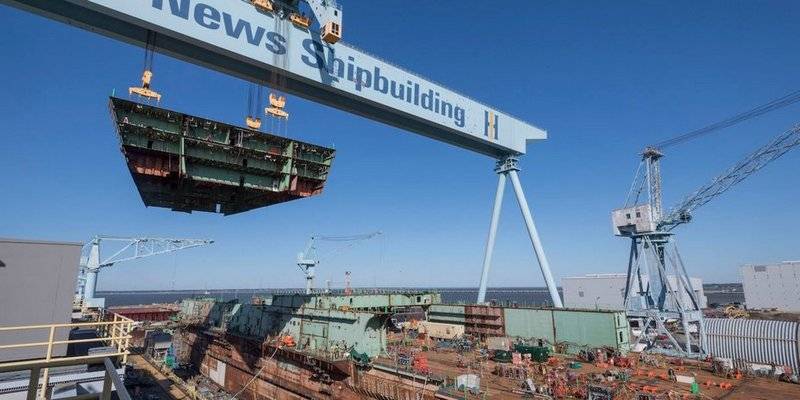 Aircraft carrier John F. Kennedy is scheduled to be launched in the fourth quarter of 2019, and in 2022 it should become part of the American fleet. At the same time, Huntington Ingalls Industries indicate that these dates can be shifted. At the moment, the ship’s hull is 75% ready (40% total readiness), and its construction is three months ahead of schedule.

In mid-April, the last major part of the hull was installed on the aircraft carrier, which was the 341 of the 447 elements. In Huntington Ingalls Industries indicate that they took into account the mistakes made in the construction of the aircraft carrier Gerald R. Ford (the ship was commissioned with a delay of two years), and are now ready to significantly speed up and reduce the cost of building subsequent ships of the same type.

Gerald R. Ford aircraft carriers have a length of 337 m, maximum width - 78 m, displacement of the order of 100 000 t and are designed for 90 aircraft and helicopters. According to the technical description, on these ships it is planned to deploy the F-35, F / A-18E / F Super Hornet, EA-18G Growler aircraft, as well as the MH-60R / S helicopters.