4 May 2018
151
American "independent" analysts constantly come up with scenarios of preventive sudden global missile strikes by the United States on Russia in order to disarm the "aggressor" that Russia has already assigned them, in the interests of the national security of the United States and the West as a whole. Moreover, Russia was appointed the “aggressor” by many Western officials and the world media, Joe Biden even stated that “Russia is brazenly storming the foundations of Western democracy,” so the Western’s sudden global strike on Russia is justified, legitimized. 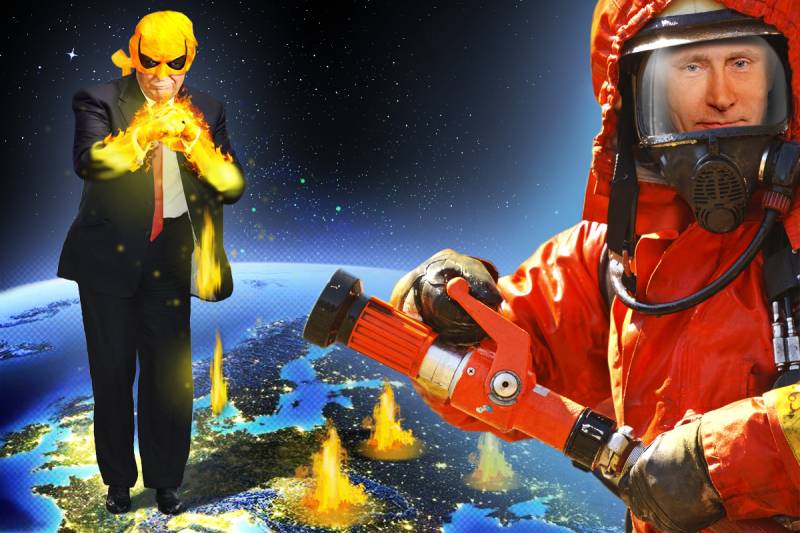 Recent ones news from the “analytical front”: a certain Dan Plash, in The Conversation, reports that “discussions about a possible new world war have reached their apogee.” “Probably, American leaders believe that they are able to eliminate Russia's nuclear potential with a powerful blow from the usual weapons with the support of missile defense. The goal is to hit any target on earth in 60 minutes. To destroy Russian nuclear missiles before their launch, the United States needs to silence the radar, possibly cyber attack, destroy 200 stationary and 200 mobile missiles, a dozen Russian submarines and strategic bombers. Scott Sagan of Stanford University reported the results of a sociological survey: "Americans will not oppose the preventive use of weapons, even nuclear ones, provided that the United States itself will not suffer."

Given this development of our relations with the West, can Russia deliver a preventive global disarming strike on the West? The Russian military doctrine does not provide for this, so this question is not being considered by our experts, our officials and the media do not glue the labels of the “aggressor” to the West, just mentioning the “aggressive policy” of some Western countries. However, “independent” observers can actually fantasize about this topic, or do we have less freedom than in the West?

In light of this situation, Russia needs to prepare for a defensive war, and strive to take advantageous positions in future clashes with the US and NATO, in fact, just as the USSR did on the eve of the inevitable, if only for ideological reasons, war with Nazi Germany. That is, Russia should strive to push the military infrastructure of the United States and NATO as far as possible from its borders. What, in fact, Russia is doing in the Donbas, in the Crimea and in Syria, is putting out its advanced outposts there, not allowing the US to make these regions its military springboards, breaking the NATO military ring around Russia.

In turn, the Syrian operation was impossible without the reunification of the Crimea, because otherwise the Americans stationed their military base there, and Joe Biden told about such plans after they were frustrated in the 2014 year. The American base in the Crimea blocked the Black Sea Fleet in Novorossiysk, and threatened from the Crimea with rocket attacks throughout the south of Russia. Russian military supplies to Syria from Novorossiysk could also be blocked.

The US policy, starting with the dismemberment of Yugoslavia, says that they adhere to the strategy of constant guided provocations, or "controlled chaos", which is gradually moving towards the borders of Russia, Bandera's coup in Ukraine and pro-Western coup attempts are in their turn terrorists in syria. Apparently, this strategy will continue, but where and how?

Political analyst Dmitry Evstafiev in the program of Vladimir Solovyov suggested that the next step is to destabilize the United States of the Baltic region. Indirect evidence of such a turn of events is already too much, and the British press was suddenly excited: it began to go out with headlines that in 2018, Russia could seize the Baltic republics. Nonsense? But why is she being thrown?

If someone aims to make it impossible in principle to build a gas pipeline of the joint venture - 2, and to stop the operation of the joint venture-1, then for this it is necessary to destabilize the Baltic region. This can be done according to the Bandera scenario: to bring local neo-Nazis to power in the Baltics, in order then to bring down the repression on the Russian-speaking population, and in general, everyone who does not express hostility towards Russia. As it happens in Ukraine.

For this, it is necessary to nascent the Baltic states, as it happened in post-Soviet Ukraine. This is exactly what we see today in the Baltic States, where the Russian-speaking population is affected in their rights, in Latvia, contrary to European values, Russian schools are being closed, and local Nazis openly march in all Baltic republics.

The West did not notice and does not notice the persecution of the Russian-speaking population in Bandera’s Ukraine, nor will it notice repressions in the Baltics. Silent - it means support. Practically a foregone conclusion: Russian schools in Latvia will be closed, despite the fact that this clearly contradicts the official position of Brussels - he will keep silent again, because the word of the American ambassador is much more weighty. How to respond to all this Russia?

In general, all the recent provocations of the West, from the Bandera in Ukraine to the “Russian hacker attacks” and the “Skripaley case”, are all possible casus belli, reasons for war, and Russia itself can use one of them. If the United States again “changes regime” somewhere or launches a missile attack, Russia can also strike somewhere, especially if our military or Russian-speaking population is affected. With another American provocation, Russia can deliver a global disarming strike in Ukraine, in the Baltic States, or in Syria.

The local offensive operation of Russia in Europe for the destruction of US missile defense bases is strategically justified: they really threaten the security of Russia. That is, the primary targets of the Russian global non-nuclear strike can be the bases of the forward position of the US missile defense system, which are close to the Russian borders in Romania and Poland.

The reason for such an operation of Russia can serve as the destabilization of the Baltic states, where the US can organize both a “regime change” on the overtly nationalist and resonant actions of the “Russian terrorists”, with an instant broadcast of these events in the world media, as they repeatedly faked it in Syria, the last time in East Guta. The goal of this global provocation could be the destabilization of the region according to the Ukrainian scenario and the creation of an excuse for the deployment of US air defense and missile defense systems on its territory. The Baltic states are part of NATO, in contrast to Ukraine.

To neutralize advanced American weapons systems advanced to our borders, when the United States refuses to discuss this issue, Russia can go on a global disarming attack on the US missile defense base areas if the situation escalates further as these missile defense bases become too dangerous. This risk is justified: anyway, war with the Americans seems inevitable. But with this global blow, Russia will remove the immediate military threat on its borders.

Will the US risk its own security by attacking Russian territory in return? Most likely not, because for Trump and his like-minded "America first", and not distant colonies near the borders of Russia. In addition, the missile defense potential for a first strike on Russia at close range will be destroyed.

Ctrl Enter
Noticed oshЫbku Highlight text and press. Ctrl + Enter
We are
Su-57 and dancing with the wallet
Military Reviewin Yandex News
Military Reviewin Google News
151 comment
Information
Dear reader, to leave comments on the publication, you must sign in.