The trial of the fascist oligarchs 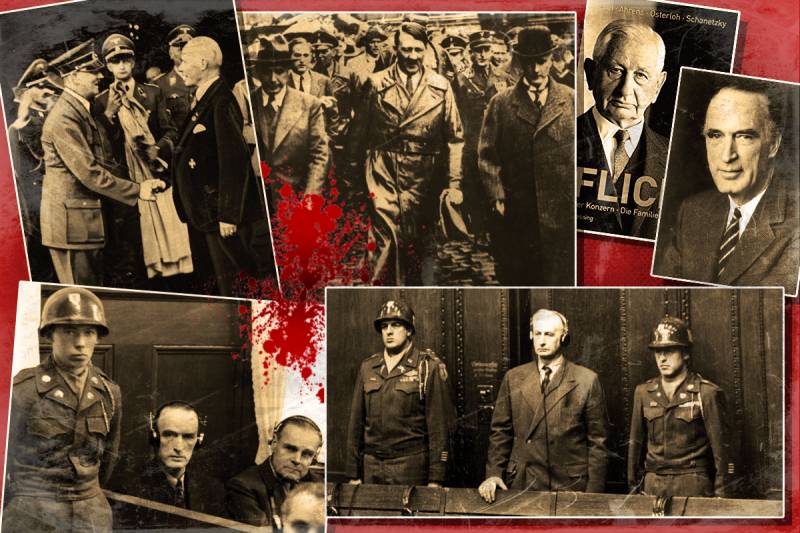 "... 12 years imprisonment with confiscation." And the hall exploded with an alarming roar!

Nobody admitted his guilt. The last of the 27 convicts in the case of the accomplices of the Third Reich was released in 1952 year. Alfried Krupp came out even earlier, in 1951. The third most important defendant, the owner of the industrial empire, Friedrich Flick, was released in 1950 year.

After the end of the great Nuremberg trials, which ended with the condemnation of the Reich top leadership, the Nuremberg trials of smaller scale over the other accomplices of the regime began. The greatest number of military tribunals took place in the American zone of occupation, where, during the 12 processes, the actions of representatives of all spheres of German society were consistently evaluated. Nazi executioners (7 death sentences) were convicted. Then the trial of the judges. In April, 1947, the time has come for a response for representatives of big business.

For those who still do not know what these names and surnames represented. Flick and Krupp - heavy industry, metallurgy, major arms manufacturers for the Third Reich. Intexen-Gemeinschaft (Community of Interest) “Farben” is a legendary cartel, the largest scientific center of its era, an association of six German chemical companies. Angels and evil geniuses, those who invented the method of obtaining synthetic oil and gas for mass murder “Cyclone-B”.

The fact that the majority of the accused have a NSDAP membership card, direct cooperation with the fascist regime, the fulfillment of Wehrmacht’s military orders and other obvious things were not taken into consideration as charges.

All questions of the tribunal were related to the actions of business representatives in the occupied territories. The actions were no different. If modern magnates are forced to somehow reckon with legislation, labor standards and salary payments to employees, imagine how, under conditions of absolute absolute power, they “blew off the roof” of the fascist oligarchy and top managers who owned hundreds of enterprises in the occupied territories.

The criminal cases included, as they say now, raider seizures, criminal property seizure and the use of bonded labor by millions of concentration camp prisoners.

German “der Ordnung” (order) turned out to be hell of hell. No autonomy for “subsidiary nations”, no illusions of rights and freedoms. The single requirement is submission to the German masters. For failure to comply with plans - repression to the full extent of wartime. For defects, sand in the bearings and other signs of sabotage, the Germans could put the entire work shift into expense.

Otherwise, everything was fine, everyone was happy with everything, “they drank Bavarian beer” and “went on Mercedes”.

Despite the differences in the methods of “privatization” and organizational aspects that had their own characteristics for each of the occupied territories, the overall scheme looked obvious. After the end of hostilities and the capitulation of the country, the entire industrial infrastructure passed under the control of the German military administration. A large “division” began, during which what was not part of the state concern “Hermann Goering” was distributed among private entities. The rigidity of the approaches increased in the direction from west to east.

The key difference in the situation with the Soviet Union was that he did not give up and continued to fight fascism. The continued fighting along with the severe destruction of infrastructure in the occupied territories of the USSR made the “investment climate” extremely unattractive for the German “partners”. Only a limited number of mining companies acted on the territory of our country, along with the banal looting of the remaining infrastructure. Peaceful idyll was complemented by endless hijacking of “Ostarbeiters” to work in Germany.

After reviewing the contents of the cases of the fascist industrialists, you are probably ready to make a definite verdict: find the defendants guilty of all the charges and sentence the moral monsters to the highest degree. The least they deserve.

Historians rightly believe that it was hardly worth carrying out separate processes for them. The scale and severity of the crimes committed made Flick and Krupp worthy to sit on the same bench with the other defendants of the great Nuremberg Tribunal. But.

Justice in historical science - the concept is unknown. Especially when it comes to such prominent figures who had close ties with the political and business elite of all Western countries.

Friedrich Flick was sentenced to 7 years in prison, of which he spent only three years in captivity.

After parole, Flick immediately revived his empire, and by 1960 the year reappeared in the top lines of the list of the richest people in Germany. Flick never admitted his guilt and refused to pay any compensation to prisoners of war and prisoners of concentration camps, whose bonded labor was used in his factories throughout the war.

The Soviet Union expressed indignation about the unacceptable softness of sentences and regularly put forward demands for the extradition of war criminals. Of course, all this was only a means of ideological struggle. As for the Soviet zone, there were no large-scale trials of fascist criminals.

First, there was no one to judge. Aware of the irreconcilable fury of the Soviet side, the key figures of German politics and big business preferred to run to the West in advance and surrender to the hands of the allies. Secondly, the USSR had no time to deal with formalities, it was necessary to rebuild the country and settle issues on reparations. Accidentally scoundrels were immediately sent to the loop by the decision of a military tribunal.

We return to the Nuremberg process over the German industrialists.

Elder Krupp was released from the tribunal for health reasons. Back in 1941, old Gustav was completely out of his mind and was forced to transfer control to his son, Alfried Krupp. 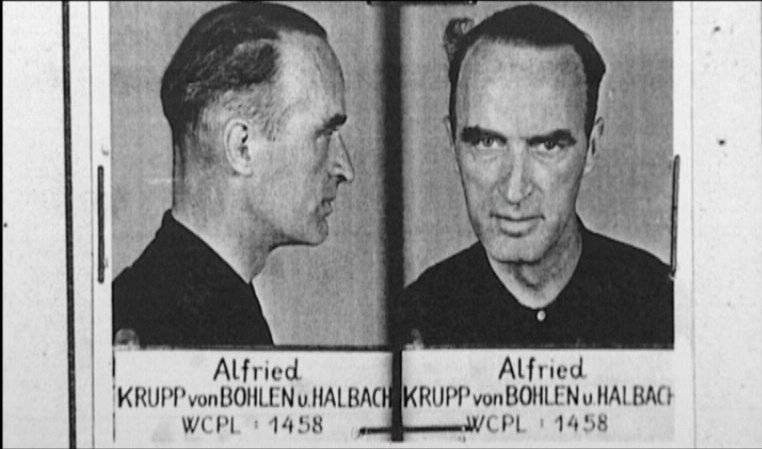 Son got his legitimate 12 years with confiscation. By decision of the Tribunal, Krupp was forced to sell all his enterprises, and to pay the proceeds from the sale in the form of compensation to the victims. However, the execution of the harsh sentence was interrupted by an unexpected circumstance: there was not a single buyer for the dilapidated workshops and the enterprises that were neglected.

At the beginning of 1951, at the personal request of the High Commissioner of the American Occupation Zone, Alfried Krupp was released early and returned to managing his plants.

Today, at the beginning of the twenty-first century, the Krupp empire continues its history in the form of Europe’s largest industrial concern “TyssenKrupp AG”.

Worst of all was the chemical cartel IG Farben. The American military tribunal concluded that World War II would have been impossible without its activities. Heinrich Butefish (IG Farben’s manager) and Heinrich Gateeneu (IG Farben’s official representative, also an SS officer) financed Hitler’s rise to power with the expectation of government support for synthetic fuel manufacturers. Subsequently, to expand scientific projects, the fascists created an experimental base for the company Farben - the Auschwitz concentration camp.

14 April, 1941 G, in Ludwigshafan, Otto Armbrust, a representative of IG Farben, responsible for the Auschwitz project, told his colleagues: “Our new friendship with the SS is a blessing. We have taken all necessary measures to integrate concentration camps in favor of our enterprise.».

The pharmaceutical departments of IG Farben used the victims of concentration camps as experimental subjects in deadly human experiments.

“These criminals from IG Farben, and not Nazi fanatics, are the main war criminals. If their crimes are not brought into the world, and they themselves will not be punished, they will pose a much greater threat to the future world than Hitler if he remained alive. And if their guilt is not made public, they will bring even more harm to future generations. ”
(From the speech of the official US prosecutor at the Nuremberg trial.)

At the trial in the IG Farben case, the company's “top managers” were tried. The main criminals did not repent of anything and were able to avoid serious punishment. Having received the minimum time, they returned to the management of a large business.

However, the ominous shadow of Nazism fell on the names of those who had nothing to do with savvy experiences, financial frauds and chemical warfare agents.

Arthur von Weinberg, Carl Bosch (his discovery is currently feeding a third of the world's population) and other brilliant scientists of 1920's. Their names were known to contemporaries like today's Ilon Mask.

In view of their advanced age, many of the founders of Farben did not see the start of the war. And the relations of the scientists themselves with the Nazis remained, to put it mildly, cool. For example, Weinberg died for an obvious reason in the Theresienstadt ghetto concentration camp.

Despite this, the names of the founders of IG Farben, along with the desecrated name of their company, were brought to shame and deleted from the pages of history. Together with the little-known names of company executives who held positions of responsibility in the era of fascism.

The “community of interest” was liquidated by the decision of the tribunal, and pronouncing the name IG Farben became shameful in the society of decent people.

Organizationally, the Community immediately split into six of its original components (and a number of smaller entities). You probably know some of these names: BASF, Bayer, AGFA. The turnover of these companies is currently 20 times the turnover of the sinister IG Farben. 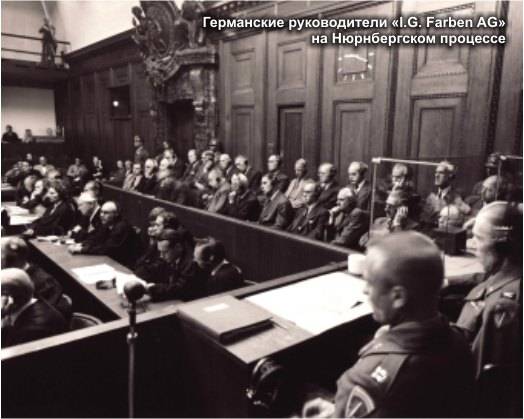 In the formal aspect, the liquidation of IG Farben took a little longer than the members of the tribunal assumed. Over the years 70 in Frankfurt am Main, there is an annual meeting of the IG Farben community. The descendants of war criminals are still trying to resolve the financial and legal issues that have arisen during the division of the company. According to tradition, a vile event is accompanied by the speeches of anti-fascists and participants in organizations commemorating the victims of the Holocaust.

Not experiencing a single drop of sympathy for fascist henchmen and bastards who drowned half the world in blood, I note that the wording "oligarch" does not exactly correspond to the industrialists of the Third Reich. Flick, Krupp and IG Farben did not plunder the bowels of their own country, and their super-profits were due to a high degree of product processing.

When changing policies, the accumulated industrial potential became the main hope for the future of the country. As a result, already at the beginning of the 1950's. industrial production in the war-ruined Germany exceeded the figures of the pre-war level.

Evil geniuses were, without exaggeration, progressors for all mankind, and the whole world used their inventions.

As for ethical issues, this is a well-known situation, and there is nothing to discuss there. For 300% profit, the capitalist will sell the rope on which he will be hung (K. Marx). In my opinion, the meaning of the story with Krupp and IG Farben is this: we should not allow a situation in which big business gets uncontrolled power.

Ctrl Enter
Noticed oshЫbku Highlight text and press. Ctrl + Enter
We are
Su-57 and dancing with the wallet
Military Reviewin Yandex News
Military Reviewin Google News
20 comments
Information
Dear reader, to leave comments on the publication, you must sign in.