3 May 2018
17
In April, 1902, the leaders of the Transvaal and Orange state, it became clear that if the war was not stopped, then the Afrikaners as a people, including the Boers, would simply not remain on the planet as a unit. After extremely painful negotiations with the commander-in-chief of the British occupation forces Kitschner (the creator of the concentration camps in South Africa) and the colonial administrator Milner, representatives of the once free republics recognized the authority of the British crown and lost their independence.


At the same time, the peace treaty that entered into history under the name of Ferinikingsky, guaranteed the amnesty to the boers, like the rest of the Afrikaners, allowed the use of the Dutch language, the Boers were guaranteed the creation of autonomous self-government in the future, etc. In the same contract, an extremely important and symptomatic item was numbered 8, which stated that the provision of full voting rights to various local residents depends directly on their ability to self-government (!). I repeat, this agreement was signed by Britain. 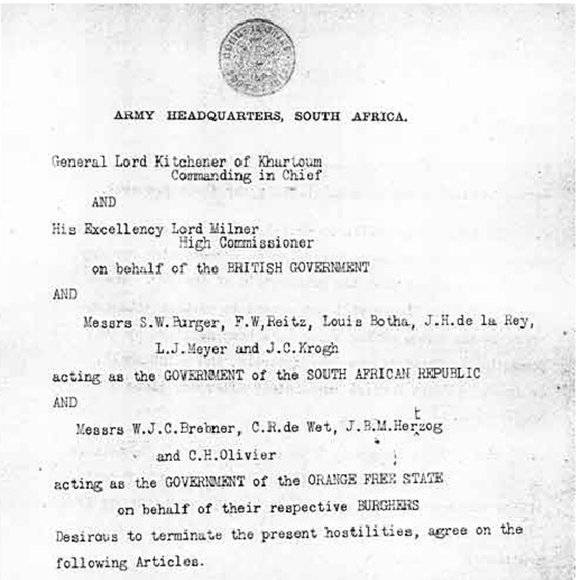 In order to more fully assess both the consequences of this clause and its very presence in the contract, we briefly describe the situation of the year’s 1902. The region was in a state of war of all against all and was totally severed.

The Afrikaners of Transvaal did not understand why Afrikaners of the Cape Colony and Natal did not revolt. Some Boers became loyal to the British, respecting the letter of the law, as their representatives demanded. Nationalist-minded Boers continued to resist, mutating, as the losing side, according to the logic of the war, into gangs. They were even sometimes harassed by themselves. weapon brothers who became members of local law enforcement. This is not counting the British living in South Africa, who according to the contract received all civil rights.

As for black Africans, things were much worse. By that time, the late Cecil Rhodes was constantly getting out of the grave, who not only actively incited the Bantus against the Boers, but separate Bantu tribes against each other. He vehemently opposed the free movement of blacks. So, negros were denied the right to free movement, as well as the right to settle in the "white" cities. Moreover, without the permission of "over" the tribes and their representatives could not invade the lands of other black tribes. This “like an eerie legacy of apartheid” sounded extremely ironic when the party of Mandela, consisting mainly of the people of Kos, the ANC and the party of the Zulu Incata fervently cut each other out of the regime. 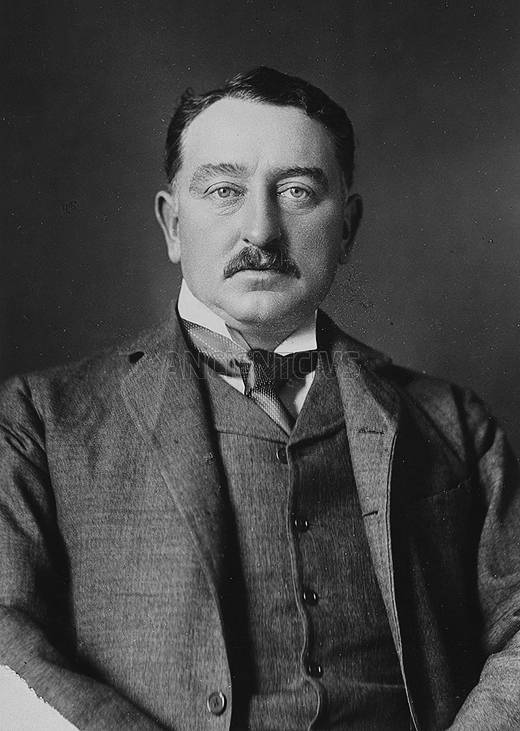 Cecil Rhodes himself did not at all believe that it was necessary to somehow integrate black African people backward in legal, industrial and social development into modern society by means of educational institutions. I will cite the words of the brightest imperial Briton Rhodes: “A learned black, gentlemen, this is an extremely dangerous creature!”

The British did not really change the policy of their beloved tycoon. Having prompted black tribes to all sorts of swag and rights, in which, however, they did not understand anything, they skillfully match their predecessor to incite them against the Boers. For example, General Robert Baden-Powell, and then the former executioner of one of the leaders, Matabele Uvini, learned the lessons of Rhodes well. He managed to “seduce” the Barolong tribe when the Boers besieged the Mafiking garrison entrusted to him. Of the black Africans, Baden-Powell made a detachment of so-called scouts, armed them with firearms and sent them to cut the drills. The rifles entrusted to the barolongs became the only value of the modern world to which they had a chance to touch, both during the war and after its completion. 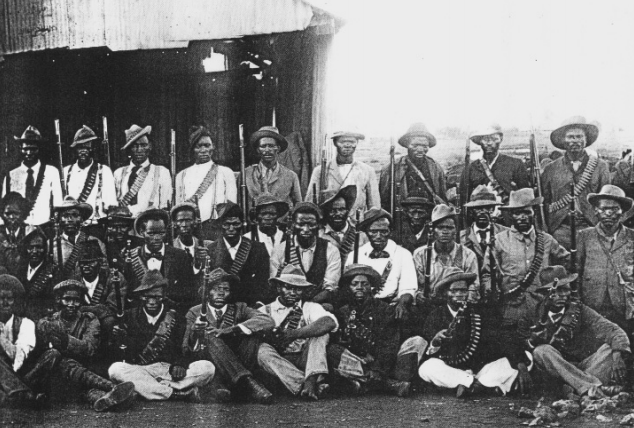 Thus, the 8 contract clause acting in the territory belonging to the British Crown was designed to preserve segregation in the region, leave the torn region under its administration, taking into account the backwardness of certain areas from each other, as well as guarantee safety and control of diamond and other mines.

Not to say that the Boers strongly opposed this point. First, they were cornered, balancing on the verge of total annihilation. Secondly, there was no opportunity to integrate the black population into modern society. To give education and legal base to people for whom only yesterday the chief judge was the leader, and social duties were absent even to their own children (in the Zulu culture of that time they were the main ones to produce, not educate), there was neither human nor financial resources. Third, the dislike of the Bantu peoples who came to South Africa later than the white settlers (see Part 1), wandered in the drills before the war, and after it settled at the level of instinct, since The British constantly used blacks as scouts and messengers.

In 1909, the British Parliament approved the “Act on South Africa”, and on 31, on May 1910, a new British dominion was proclaimed - the Union of South Africa (Cape Colony, Natal, Transvaal, former Orange State).

It should be noted that already in 1911, the so-called "color barrier" was introduced. In reality, he incarnated in exile from the mines of whites (!), Who had to pay a decent salary. And in their place came cheap labor in the form of blacks. To say that the omnipresent Rhodes, had he been alive, would have jumped for joy to heaven, to say nothing. After all, he was not only the "architect of apartheid", but also the founder of the diamond mining company De Beers (now owned by Anglo American). In addition, private enterprise was concentrated in the hands of the British.

In 1913, the “Law of the lands of the natives” is born, securing the territory of black Africans within certain boundaries. These will be the “Bantustans”, so named after the Bantu peoples. In essence, this is an attempt to maneuver between the greedy desires of British magnates and the hope of getting along with black South Africans, giving them the opportunity over time to form their institutions of self-government that will not function around leaders and the rights of the strong. It is naive, of course, given that the indigenous lands could not, to the delight of the magnates, keep their populations within their borders. Firstly, the territories were small for the living of those who have polygamy and sowing children as radishes within the framework of customs (the recent democratic president of South Africa Zuma had only 5 recognized wives and 18 children). And, secondly, it is very difficult to explain the concept of border to those who, under pressure from the Zulu Empire, wandered for years.

But the country continued to blaze. The revolt of Jacob Delarée in 1914 was crushed by the British army with the help of the Afrikaners themselves. At the same time, South Africa was involved in the First World War as an ally of Britain. As a reward, Afrikaners were allowed to teach at school in "Afrikaans" - a very peculiar language of not only white but also black Africans, who came from the German branch of languages.

Miners' strikes, threats of new riots, domination, as dismissed miners believed, “kafirs” at workplaces — all this shook the country. Soon the government of the dominion, which had been brought to the minefield in advance, was again blown up. They were forced to oust black workers from the mines and bring whites back to work, among which the number of unemployed grew by leaps and bounds. In order to somehow smooth out social tensions, the authorities decided to tighten the screws of apartheid.

The term “apartheid” (i.e. separation) was first pronounced by Jan Smuts, one of the SAU prime ministers who fought in the Boer War and ... and was a personal counsel to Cecil Rhodes. The reincarnation of Smuts into a Boer officer still forces some to see him as a misguided Cossack. 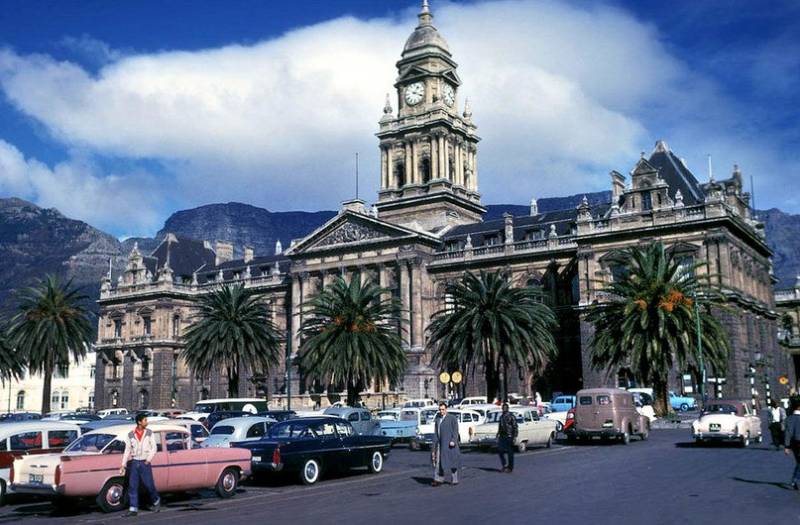 Cape Town in the "dark times of apartheid"

After the war, all negros who were not wage workers were subject to compulsory resettlement in the territories assigned to their peoples. These territories are now officially considered by the South African authorities either as “independent states” or as “self-governing territories”. The collapse of the former British influence after the Second World War made it possible for angry irritated Afrikaners to take decisive and not very deliberate steps. After all, entrepreneurs, both English and local, continued to import cheap labor. But tax revenues from industry and now gave hope to preserve white Africa, giving up part of the territories and pulling them up to their level.

Thus, apartheid in South Africa was not the cave racism to which it is being presented. And it was even more different from the savagery that the British and Cecil Rhodes preached at the end of 19 and the beginning of 20. Among the frankly segregated laws of apartheid were laws aimed at the development of self-government black Africans and their education. 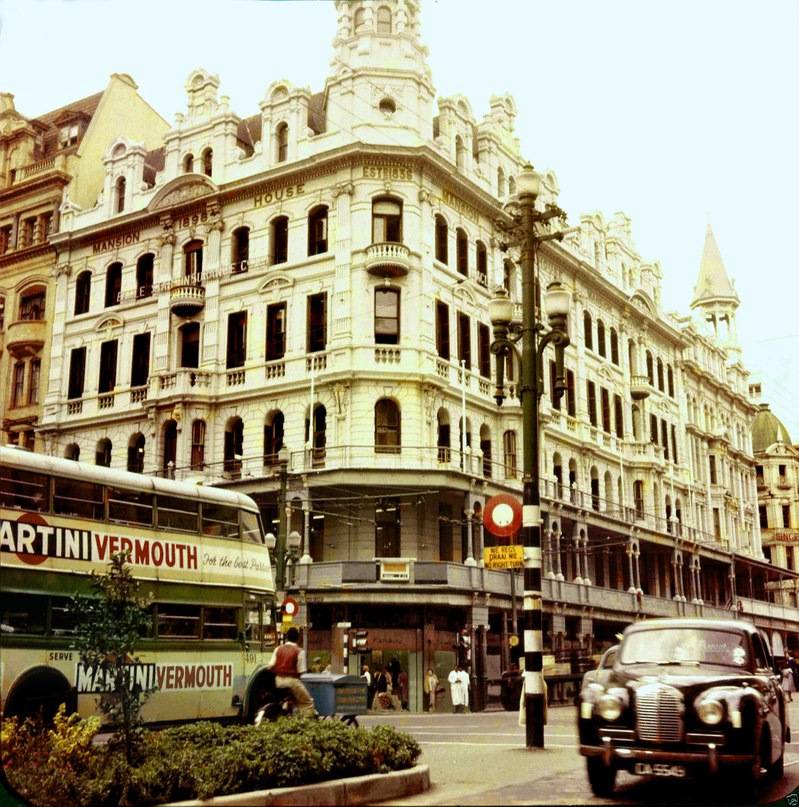 Since 1951, the authorities have obliged businessmen who hire workers from Bantustan to build housing for them. Tell it to the modern migrant workers, who do without apartheid. In 1958, a law was introduced to improve the self-government of black Africans in Bantustans, aimed at the early establishment of their own governments. In the next 59, the Bantu Investment Corporations Act created a mechanism for transferring capital to Bantustans to create jobs there. In the same year, there was an increase in the number of universities for blacks. Etc. But such “trifles” are either completely forgotten or silenced, and screaming words come to the fore- “slavery” (which, like tracing paper, falls on the use of “guest workers”), “racism” and so on. 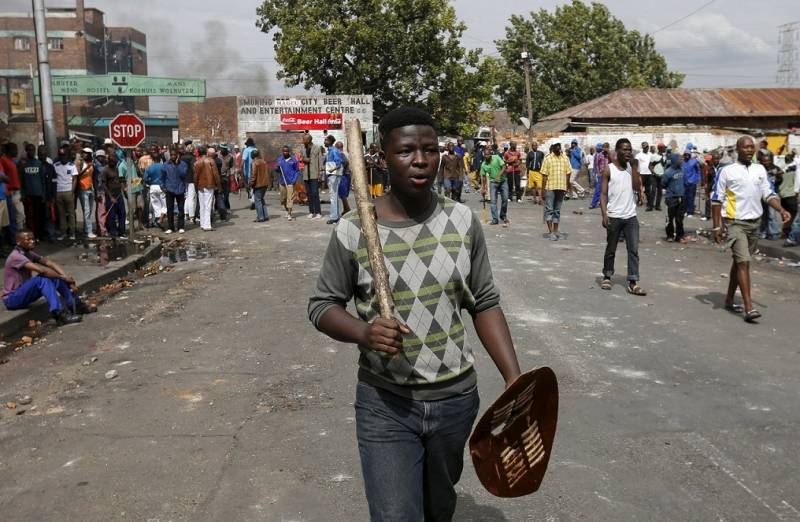 At the same time, such parties as Incata, representing the interests of the Zulu people, fully supported the system of separation, fearing not even whites, but their own black brethren, for example, the people of Spit. The authorities, despite some short-sightedness, were well aware that the black majority was not only aggressively opposed to the white minority, but also against each other — there were too many tribal differences. In addition, opposition-minded representatives of black South Africans, encouraged by comrades from abroad, who did not want to know about the intricacies of South Africa, did not have enough cadres to manage such a developed country. But South Africa, as a competitor, and not at all because of apartheid, was defamed at the UN with might and main. Attempts to explain the situation from the point of view of South Africa stumbled upon general doctrinaire.

Ctrl Enter
Noticed oshЫbku Highlight text and press. Ctrl + Enter
We are
"Condenser" and "Transformer". About almost mortarsSu-57 and dancing with the wallet
Military Reviewin Yandex News
Military Reviewin Google News
17 comments
Information
Dear reader, to leave comments on the publication, you must sign in.