2 May 2018
29
So, Poroshenko made a long-announced change in the format of the punitive operation in the Donbas. Now, instead of the “anti-terrorist operation”, an operation by the United Forces of Ukraine (EP) is being conducted against the population of the people's republics, whose leadership has been transferred from the SSU to the APU. 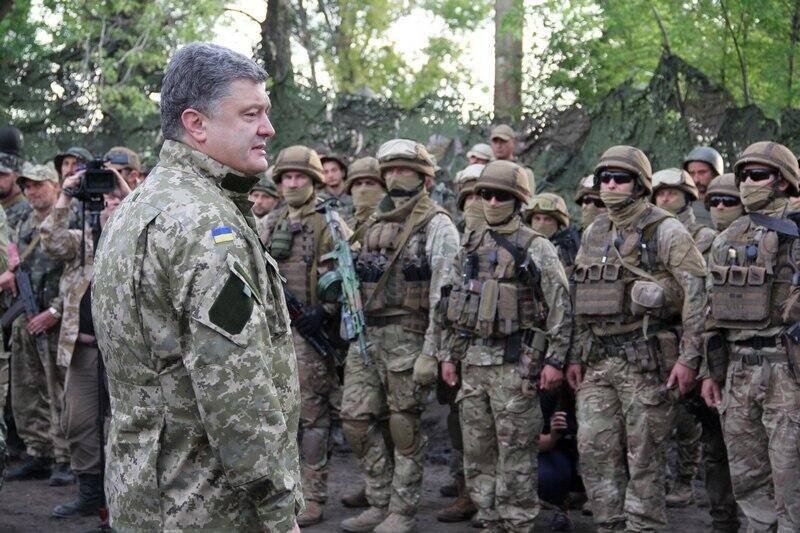 Kiev "innovation" has already received feedback on the other side of the front. So, the head of the representative office of the Donetsk People’s Republic at the Joint Center for Control and Coordination (STRC) of the cease-fire regime Ruslan Yakubov told RIA “News”That the change in the format of the operation of the Ukrainian security forces in the Donbass will not change the situation on the contact line and means continuing the course of attempting a military solution to the conflict.

A more detailed commentary on the change in the format of the punitive operation of the Kiev junta was presented to the media by the deputy commander of the operational command of the Armed Forces of the DPR, Eduard Basurin, who had time to get acquainted with the material on this issue collected by the republic's intelligence agencies.

According to Basurin, the beginning operation will consist of several stages. At the first, the DUS leadership will try to take the nationalist battalions under full control.

“As full participants in the conflict, armed formations of nationalists from such movements as Right Sector, UDA (banned in the Russian Federation) and others will be declared who will cover the exposed front sectors and also be used for various sabotage and“ pacifying and intimidating shares "on the local population on both sides of the front," - said Basurin.

Two months have been defined for the first stage, and it will also be marked by massive shelling of populated areas of the people's republics with the aim of “firing out” the population of the frontline territory.

The second stage will begin with the capture of populated areas and the dominant heights in the "gray zone" for the preparation of further large-scale offensive actions.

“But we will get more accurate information after all plans have been approved by the military-political leadership of Ukraine and our intelligence officers have access to them,” Basurin said, adding that he expects this in the near future.

A definite confirmation of the whole stated by Basurin was the change in the “schedule” of shelling of settlements in Donbass. So, if earlier punitive bombardment of Donbassians at night, when the OSCE “monitors” sleep and do not record the facts of violation of the “cease-fire regime”, now the strikes are carried out in the morning and afternoon. When the artillery fire can be easily adjusted from the UAV, even if it is not equipped with thermal imagers, and make it as accurate and efficient as possible.

The result is obvious: in just a few days, 18 suffered from artillery fire of the Armed Forces of Ukraine and killed five civilians in the DPR.

The preparation by Kiev of a new aggression against the people's republics is also indicated by the information obtained by the LPR intelligence, announced at the briefing by the official representative of the people's militia lieutenant colonel Andrey Marochko.

“In connection with the commencement of the joint forces operation in Donbass on 30 on April, or, we believe, the occupying forces operations, the OOS command in the period from 1 to 31, May planned large-scale measures to search for military personnel who left parts without permission,” Marochko quotes "PolitNavigator".

Ukrainian sources also inform about possible plans for an offensive operation. So, in the Kiev magazine "New time" experts describe a possible scenario of environmental protection.

In their opinion, the offensive will develop along the entire line of demarcation, and the advancing forces will consist of no less than 100 of thousands of fighters and 1,5 — 2 of thousands of armored vehicles. Moreover, the “experts” paint a simple picture of the upcoming genocide.

“Success in battle, according to military experts, will bring total war, the uncompromising destruction of the enemy and the delivery of powerful attacks on his critical infrastructure. An important addition is that the country will have to actively conduct partisan-sabotage activities on the lands occupied by the separatists, ”the magazine writes.

It is also indicated that with the implementation of such a scenario, there is a high probability of imposing martial law in the country, as well as measures to neutralize the “fifth column”.

At the same time, experts are more likely to expect an operation on peace enforcement from Russia.

“There is also a high probability of an open invasion of the Russian troops to the east of Ukraine under the auspices of the protection of the local population. Society will split into conditional parties of war and peace. The split will grow under the influence of the growing number of victims of the conflict. According to conservative estimates, about 10 thousand people will die during a large-scale offensive campaign. If the Russian Federation directly intervenes, the total number of victims will reach 300 thousand people.

NATO is unlikely to become a party to the conflict, so military success will depend entirely on the dedication of ordinary Ukrainians, as well as the talent of domestic commanders, ”the script says, and it’s clear that the authors do not rely too much on the last two components. 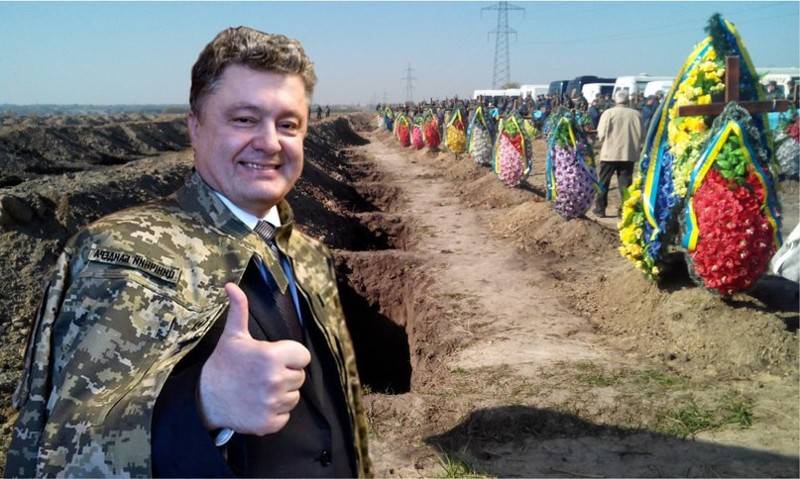 And it is right. Since the preparation for the transition to the “new format” and the rumors that an attack would immediately begin within the EP, the mass desertion from the Ukrainian formations was caused.

In particular, the Ukrainian publication Observer publishes an interview with Vladimir Shilov, the ex-commander of the 5 company of the Dnepr-1 battalion, who indicates that stories about a strong Ukrainian army are invented, and the situation is getting worse every day.

“Everything returns to the old channel. If people had the opportunity to terminate the contract, then 50% would instantly terminate and go to a citizen. Everything is really bad. God forbid, Russia will move - everything will be very bad, ”he said.

It is noteworthy that the opinion of “atoshnik” coincides with the sociological studies recently carried out in Ukraine, according to the results of which, about 50% of fighters would be ready to terminate contracts and leave the ranks of the Ukrainian Armed Forces. Among the main reasons soldiers call cruel treatment of commanders and a lack of understanding of the essence of the conflict in which they take part.

Be that as it may, but according to NM LNR, only in the operational-tactical group "Lugansk" the number of deserters reached more than 500 people.

All this data raises serious doubts about the possibility of the Armed Forces of Ukraine not only to fight the Russian army if it is forced to carry out an operation to enforce peace, but also to conduct a large-scale attack on LDNR, leading urban battles in the agglomerations of Donetsk, Horlivka and Luhansk. And the Ukrainian commanders understand this better than anyone else.

However, changing the format and adoption of new offensive plans does not mean that Kiev really intends to launch a suicidal attack for it. To begin with, if the junta had the opportunity to crush and seize the people's republics of Donbass, she would do it in the ATO format, and the new “cover” would not add any fundamentally new opportunities to the Ukrainian Supreme Soviet.

In other words, environmental protection is started not so much to achieve a military victory, but to solve other problems. And about. Minister of Foreign Affairs of the LPR Vladislav Dayniy believes that Poroshenko’s “innovation” is necessary for the Kiev regime to legitimize his crimes “retroactively”.

In addition, it is obvious that Poroshenko will try to use environmental protection to keep the power flowing from his hands. The new format will allow him to concentrate in his hands the levers of emergency management of the country not only in the Donbas, but also in Ukraine. He will be able to arbitrarily use military and police force, including to prevent any protests. He will even “have the right” to cancel the election under the pretext of threatening national security. 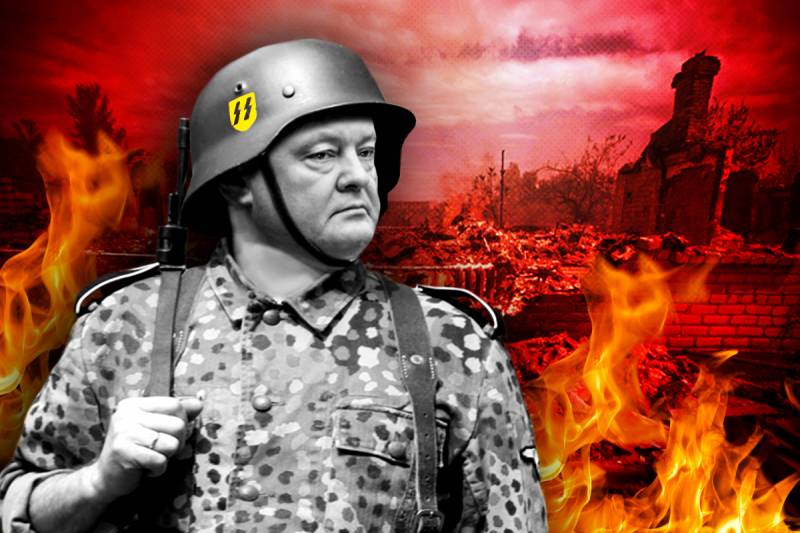 However, even if the Ukrainian Armed Forces do not dare to rush into a large-scale offensive, the Donbas will not bring anything good to the new format of the punitive operation.

Ctrl Enter
Noticed oshЫbku Highlight text and press. Ctrl + Enter
We are
Ukrainian "menu" for the "Norman dinner": the Armed Forces of Ukraine intensified the offensive order at Novoazovsk ONSituational analysis of the death of the MH17 flight (Malaysian Boeing 777), made on the basis of engineering analysis from 15.08.2014
Military Reviewin Yandex News
Military Reviewin Google News
29 comments
Information
Dear reader, to leave comments on the publication, you must sign in.