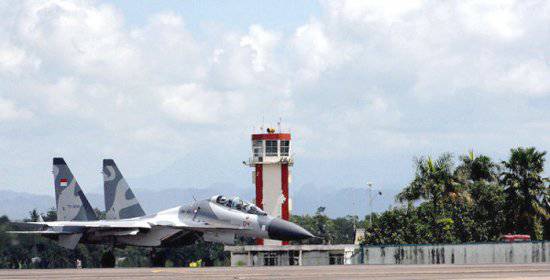 The strange death in Indonesia of three Russian specialists requires an investigation with the participation of our intelligence services.


September 13 found the bodies of three Russian engineers at the Indonesian Sultan Hasanuddin airbase. According to the doctors, each of them died as a result of a one-time heart attack, which caused the representatives of the Russian consulate motivated suspicions of the violent nature of the tragedy.

The leadership of the air base began investigating the circumstances of the death of Russian specialists. According to the electronic reference book of the Ministry of Defense of the Russian FederationWeapon Of Russia, this is Sergey Voronin, Alexander Poltorak and Viktor Safonov, who arrived at the base of the Indonesian 5 Air Force on September 2010 of the year to service six Su-27SK and Su-30МК2 fighters purchased from Russia.

Local mass media report that the bodies of two Russian specialists were found in their hotel rooms. The third engineer, Viktor Safonov, died in hospital.

Interestingly, only the last one was treated at the hospital, and it is not clear with what diagnosis they put him there. The embassies of our country and Indonesia constantly exchange information. Indonesian Defense Minister Purnomo Yusgiantoro has already expressed his condolences and the hope that this incident will not affect the military-technical cooperation of the two countries. The Russian side has already stated that the incident will not violate Sukhoi’s plans for cooperation with Indonesia.

When the bodies of the dead Russians are delivered to their homeland - is unknown.

Engineers arrived in Indonesia from Komsomolsk-on-Amur. There were a total of 40 people: 37 engineers and three pilots. Their task was to help Indonesians in the management and maintenance of combat vehicles - Su-27KM and Su-30MK2.

“Sukhoi Company is now the largest airline holding company in Russia with 29 thousand employees. She is the largest supplier in the country aviation equipment for export and ranks third in the world in terms of production of modern fighters.

The first versions of the death of engineers appeared in the Indonesian press.

So, the local newspaper Jakarta Globe writes that as if all three had drunk vodka, and
it was she who caused their poisoning. But the representative of the Russian diplomatic department Vladimir Pronin categorically rejected this assumption. And, nevertheless, local journalists write that the pilots drank together the night before and parted late - around 4 in the morning. They found dozens of empty beer bottles in their room.

The version that the Russians drank was put forward by the representative of the Ministry of Defense of Indonesia, General Wayne Midgio. According to him, many foreigners become ill from drinking vodka in Indonesia. “It’s not a problem if you drink too much vodka in Russia - it’s cold there. But here, in Makassar, it’s very hot, and the body can behave differently, ”said Wayne. Be that as it may, the official cause of death will be announced after the autopsy.

There are other versions of what happened. They say that Russians could still be killed. Presumably, this could intimidate the Russians: they say, you should not cooperate with the government of the country, which has strong opponents. But the investigation does not seriously consider this version. By the way, the doctor of our embassy and the representative of Rosoboronexport will take part in the investigation of the case. The leadership of the local air base also promised to help. In any case, the case looks strange: until the death, none of the three Russian engineers complained of heart problems.

Suspicions of the ordered nature of "heart attacks" are intensified due to the fact that around this and other Russian-Indonesian military-technical contracts there has been a fierce competition that is being waged against us by American and French companies.

History Confrontation in the Indonesian arms market dates back to the middle of the last century. Freed from colonial dependence, Indonesia began to develop relations with the USSR.

At the beginning of 1957, American reconnaissance aircraft discovered the construction of a large military airfield in Indonesia. According to the obtained intelligence data, it was supposed to be used for the basing of Soviet aviation. In order to counter the Soviet presence in Indonesia and military-technical cooperation, the Americans began to actively support opponents of the new regime, who concentrated on some islands. The most successful for them was the operation in Sumatra. 15 February 1958, a number of leaders proclaimed the creation of a state independent of Jakarta. CIA agents overtook rebels around 50 aircraft of various types (15 B-26, C-54, C-47, C-46 and even, according to some reports, B-29) from the warehouses of the US Air Force. In April 1958, the Indonesian Air Force struck a successful blow to this base, a rebel plane was shot down and an American Allen Pop pilot was captured. A scandal broke out that played into the hands of the USSR. As a result, Indonesia signed a contract for the supply of Soviet MiG-60 fighter jets and training MiG-17UTI fighter jets, IL-15 bomber and several IL-40 fighter jets.

The United States in the fight for the market began to threaten Indonesia invasion. Then the USSR, at the request of the Indonesian leadership, deployed a number of Air Force and Navy bases here.

In 1961, Indonesia began receiving Soviet Tu-16X bombers armed with anti-ship cruise missiles KS-1. Just before the end of 1962, 25 bombers were delivered. MiG-19 and MiG-21F-13 fighters, An-12 transport aircraft, Mi-4 and Mi-6 helicopters were also supplied from the USSR. During these years, the Indonesian Air Force became the most powerful air force in the region. This made it possible to successfully suppress the rebels and join the islands one by one.

However, excessive military spending by the middle of 1965, led the country to a crisis. As a result of the military coup, a pro-American General Suharto came to power. Relations with the USSR were curtailed, respectively, and the supply of our weapons, spare parts for Soviet-made aircraft, was also stopped. Soon the Indonesian air force, consisting mainly of Soviet technology, degraded. By 1970, only 15% of the entire park was able to take to the air. The market has been cleared for American and French equipment. The F-86, F-5, A-4 Skyhawk attack aircraft began to be supplied to the Indonesian Air Force. After the aviation exhibition in Indonesia, held in 1986, the American company General Dynamics and the French Dassault entered into a fierce competition for the right to supply the new fighter-bombers to this market. F-16 and Mirage 2000 claimed this role. The competition was won by the Americans. But later on, their policies in the region raised serious concerns for the country's independence with the Indonesian leadership. 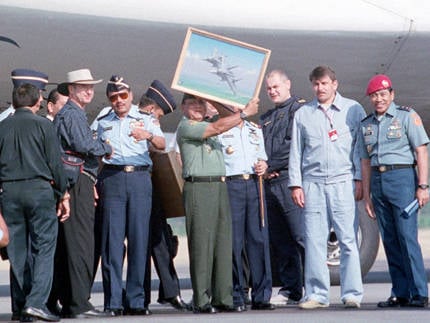 In July, the 2003 of the year, the X / NXX of the US Navy F / A-5 fighters invaded Indonesia airspace. The Indonesian Air Force managed to fly a pair of F-18s to intercept them this time, the incident ended peacefully. However, he forced Indonesia to turn again to face Russia in terms of arms supplies. Already in 16, the Indonesian Air Force received from Russia two Su-2003 fighters and two Su-27 aircraft, partially paying for their supply with palm oil.

But the Americans stepped up pressure on the country's political elite, and at the same time negotiations began on the acquisition by Indonesia of six new F-16C / D fighters, modernizing the existing C-130 aircraft fleet to the C-130J standard.
The possibility of buying two squadrons of "used" Mirage 2000-5 fighters with Matra Magic II and MBDA MICA missiles was also considered. At the same time, France is trying to introduce the Rafale fighter into the Indonesian market, citing the fact that Mirage 2000 fighters have already been discontinued.

The sharpness of competition was given by the fact that, trying to persuade Indonesia to buy French fighters, the French bank Natixis betrayed this country
large loan. However, the Indonesians unexpectedly spent it on the acquisition of Russian "Dryers".

And this is a purely pragmatic solution. Indonesian experts have repeatedly stated that the technical characteristics of Russian aircraft are the most consistent with the requirements and conditions of the Indonesian state. The thing is that Indonesia is an island country, most of the territory is sea space. Sometimes fighters need to be in the air 4-5 hours, and with refueling - more than 10. This is the main characteristic that has attracted Indonesia in Su fighters, and their complete combat equipment fully complies with the requirements of the Indonesian Air Force. It is planned to gradually purchase an 24 or 32 fighter to form two squadrons.

The contract with Russia includes training of technical staff and pilots. First, they were prepared at the air base in Zhukovsky. Now the trainings are already in Indonesia. Our experts teach Indonesian partners and competent aircraft maintenance.

The keen competition for this market undoubtedly arouses to our rivals the desire to stick in the development of military-technical cooperation between Russia and Indonesia. In the course can go and actions of fear of our specialists. Therefore, the investigation of at least the strange deaths of Russian engineers in Indonesia should not be surrendered solely to the leadership of the Sultan Hasanuddin airbase. Be sure to connect the Russian special services. The causes of the death of Russian citizens must be unequivocally clarified.

According to experts, the Indonesian arms market is very promising. The country's military budget today reaches $ 3,2 billion. However, according to the Minister of Defense of Indonesia, in order to protect the archipelago, the country needs to spend up to $ 10 billion on defense. 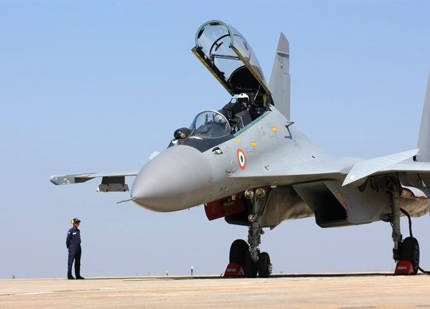 An important role in promoting Russian products to the Indonesian market was played by a loan of $ 1 billion, which Moscow allocated to Jakarta, limiting it to one condition: buy weapons only in Russia. In particular, Irkut Corporation held talks on the joint implementation of the Indonesian program for the development of unmanned aerial vehicles (UAVs). First of all, we are talking about the Irkut-10 UAV intended for television and photography with real-time data transmission. Such an apparatus could be involved in solving the tasks of protecting borders and the safety of navigation, fighting against drug trafficking and terrorism, and monitoring the state of the environment. The realization of the idea of ​​an air launch of spacecraft from the An-124 aircraft, which could take off from the airfield of Biak Island, is also quite probable.
Ctrl Enter
Noticed oshЫbku Highlight text and press. Ctrl + Enter
We are
Indonesia to buy Sukhoi 180 fightersIn Indonesia, expect a new batch of Russian aircraft
Military Reviewin Yandex News
Military Reviewin Google News
Add a comment
Information
Dear reader, to leave comments on the publication, you must sign in.