10 May 2018
30
We wrote about the confrontation of the Russian 4 of the Iron Rifle and German 20 of the Steel Infantry Divisions in the Kiselinsky battle (see Broken steel), when the Russian shooters fought off the vanguard of the "fire brigade" vanguard - an elite unit of the Kaiser army, who arrived in Galicia to rescue an Austrian ally. Now let us recall the earlier episode of the combat path of the glorious 4 of the Iron Rifle Division - one of the elite front-line units of the Russian army of the First World War. An outstanding feat of the division was participation in the Lutsk 1916 breakthrough.


There was a breakthrough preparation.

The first day the Russian artillery carried out artillery preparation, striking the enemy’s defensive positions, and on the night of 23, in May, she wore shrapnel fire - preventing any damage that had been done before. Under the cover of artillery fire were transferred to the river. Osinische battalions 13 th and 14 th rifle regiments.

From 4 hours of 23 on May, the artillery continued to smash the enemy’s first lane, ending the destruction - and earning the recognition of shooters, with a huge rise waiting for the desired minute of their attack.

The plan of an artillery attack was carried out as per notes. It was necessary only to regulate the time and tension of the fire, to transfer the fire of one group to the aid of the neighboring group, to direct fire on the Zabolottsy to promote the 15 Infantry Division, to fight the battery, etc.

Russian artillery worked so selflessly, skillfully and systematically, that in 29 hours everything that was created by engineering and months of Austrian work was reduced to dust.

In 9 hours to the accompaniment of hurricane fire of their artillery, the arrows rushed to the attack. 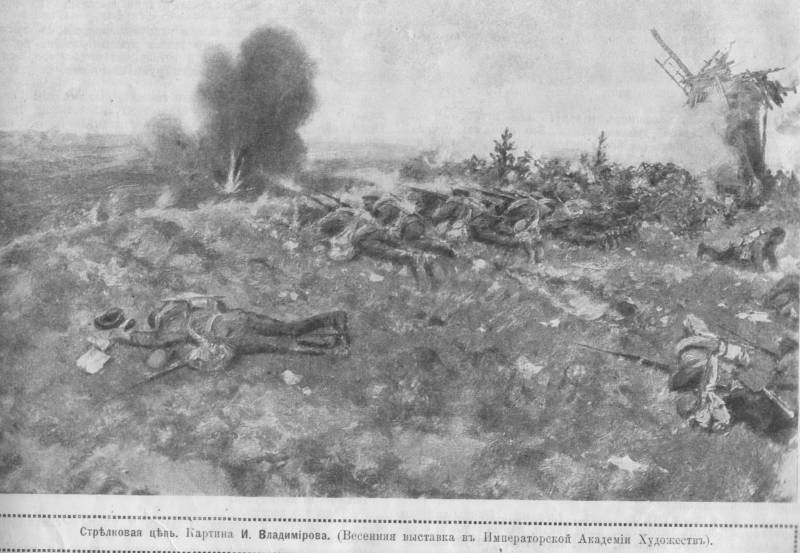 The commander of the 13 Infantry Regiment Colonel P. P. Nepenin moved the 3 battalion to assault and, instantly breaking through both lines of the enemy defense, 1 battalion entrenched in the captured positions, and 2 battalions attacked to the south - striking the Austrians on the flank and til. By the 11 watch, the 1-I band of enemy defenses, up to and including the “labyrinth,” was in the hands of iron shooters. 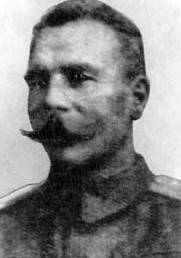 The artillery of the commander of the 2 division of the 4 rifle artillery brigade of colonel V. F. Piskorsky concentrated fire on the second lane.

And with the powerful assistance of this fire, the 13 th regiment secured its right flank with a ledge (the 15 th regiment was delayed), attacked swiftly again - and by the 11 watch 30 minutes took possession of the second band of enemy fortifications, before which to the 13 watch and entrenched.

The two strong counter-attacks of the arrived in time 13-th Landwehr division - from Pashchashevo and Bakorinsky forest - were repelled by the friendly efforts of the shooters and artillery. 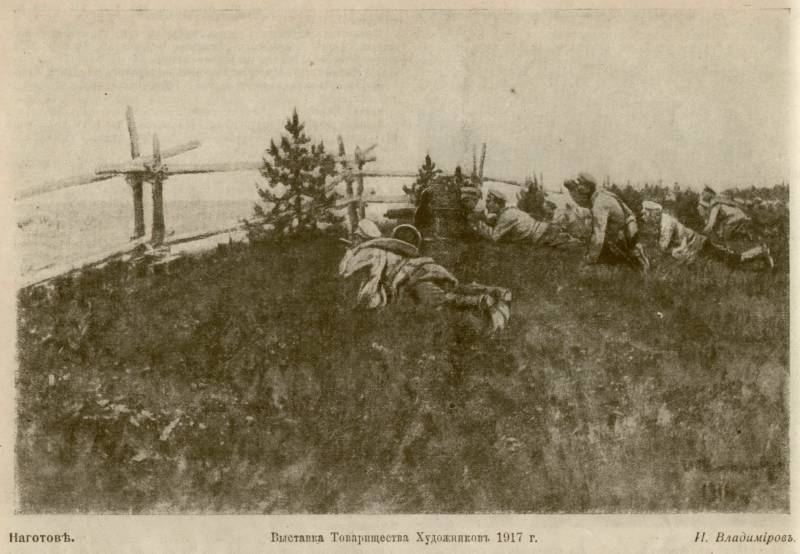 The lightning-fast and beautiful maneuver of the 13 Infantry Regiment, full of valor and tactical art, ensured all further breakthrough success and culminated in the capture of serious trophies: 59 officers and more 1500 lower ranks of prisoners, 12 guns, 9 machine guns, bombers, etc.

The 2 battalions of Colonel Keller's 14 Infantry Regiment were faced with a minor task — and the enemy’s fortifications in front of them were not sufficiently destroyed. Nevertheless, the valor of the shooters and the initiative of the regimental commanders, having exceeded the task, did a lot. Three companies transferred to Zhornyshche, despite the insecurity of the left flank and the strongest fire from the cemetery redoubt, stormed the front of the enemy along with the left flank of the 13 regiment, captured the first lane south of the "maze", hit the south along the trenches, and then seized the second lane with height 111. In the 15 hour, two companies of the first battalion, attacking a powerful cemetery redoubt from the south and north, captured it during a bayonet attack, and poured along the Austrian lines, sweeping away the enemy and pursuing to the valley located east of Zabolottsy.

In this glorious battle, where one and a half battalions of shooters showed an inimitable rush, it was taken: prisoners - 55 officers, more than 1000 lower ranks, 5 guns, 7 machine guns and bombers. Losses: 2 officer and 328 shooters.

The commander of the 15 Infantry Regiment, Colonel Ya. V. Safonov, threw two battalions into the front line assault, and under the deadly fire of the Austrians, they captured two lines of enemy fortifications. But further advancement stopped: the right flank of the 15 regiment in the front page met three lines of trenches and an extremely strong system of rendered ring fortifications opposite the heights “B” and “C”. 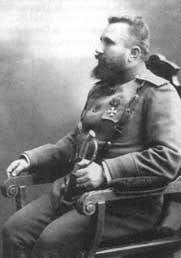 With the height of 6 embracing and not attacking the 110 rifle regiment, the flank of the 15 was struck by a strong fire.

It took a new art strike, the influence of the reserve battalion in the battle line, interaction with the 6 rifle regiment - and a number of brutal bloody attacks. Colonel Ya.V. Safonov declined the doubly proposed reinforcement by the division reserve — and with the last pressure of the right-flank battalion seized the group of fortifications, destroying the enemy.

The commander of the 16 Infantry Regiment, Colonel N. P. Biryukov, with the assistance of Colonel V. F. Piskorsky's division (who moved into the sphere of enemy fire), hit the Austrians on the southern edge of the Rozhansky Forest and at the crossroads. And one battalion overcame the Selischensky forest and attacked the Austrians to the west of the latter - three times. A hot battle ensued on the whole front, in which the battalions of the 16 Infantry Regiment, attacking valiantly, fighting off a series of counterattacks and skillfully maneuvering, overthrew the enemy, took prisoners to 1500, and in 12 hour went to Tung de Pona fortifications. 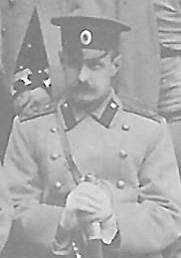 The division of Colonel V.F. Piskorsky openly, on the highway, accompanying the shooters, rushed to the stake. Teremenskoy.

With the 12 clock, the 4 rifle, having an 2 regiment in the battle line, launched an attack on the extraordinarily heavily fortified Lutsk tete-de-pon (several lines of trenches, and in front of them - from 3 to 16 rows of wire obstacles, a mass of concrete structures, etc. d.) on the front of the Bush - Teremno - Pidhaitsy. The shelves met by the strongest rifle and artillery fire were dug round.

In order to accelerate the decoupling, in 13 hours 20 minutes, the commander of the 1 brigade, Major General S. L. Stankevich, with the 15 rifle regiment and the 40-m mortar battalion (later the 3-th 11-th heavy division was also attached) Front of the 14 Rifle Regiment. S.L. Stankevich united command of units in his hands. The front of Colonel N. P. Biryukov was reinforced by the 18 heavy battalion. 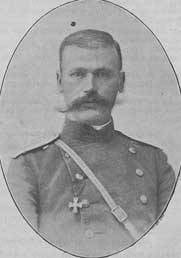 After artillery preparation in the 16 watch, Colonel N. P. Biryukov again moved the regiment to attack. With the support of 15, the company’s auto-bullet platoon rushed forward, but, met with deadly fire, lay down at the wire barriers.

But the frontal attacks of the 16 rifle rifle chained the forces and attention of the Austrians.

S. L. Stankevich transferred the 15 th Infantry Regiment to the count. Zimnik, deployed the troops of his group and after the powerful fire of all the batteries of the 1 division of the 4 rifle artillery brigade of colonel MF Shkadyshek in the 18 hour, attacked (with the support of the 6 rifle regiment) the enemy.

This skillfully directed and swift strike, which decided the fate of the battle for tete de pont, took the strongest fortifications of Gusche and Teremno - moreover, the 14 Infantry Regiment captured over 2000 prisoners. The Austrians fled in disarray to Lutsk.

By the end of May 25, Lutsk is in Russian hands.

And it was the iron arrows, moving in the vanguard of the advancing Russian troops, seized the city, which gave the name of the whole operation - Lutsk, writing a new brilliant page in the chronicle of the victories of the Russian weapons.

Ctrl Enter
Noticed oshЫbku Highlight text and press. Ctrl + Enter
We are
"Condenser" and "Transformer". About almost mortarsSu-57 and dancing with the wallet
Military Reviewin Yandex News
Military Reviewin Google News
30 comments
Information
Dear reader, to leave comments on the publication, you must sign in.