French cavalry in the East. Part of 3. The rush of Lieutenant Goshe de la Ferte

8 May 2018
17
After taking Uskuba, Moroccan spag and African horse rangers pursue the enemy along the r. Moors - acting in conjunction with the Serbian 1 th army. Next comes the march to the Danube.


Finally, the 4 African Horse Ranger Regiment reached old Serbia. And in conjunction with the squad Trany 8 - 9 of October, he conducts the case with Mitrovica. The task of the 4 African Horse Ranger Regiment: from Ferizowitz to go to Mitrovica (73 km), to capture the city and the rolling stock. Owing to the isolation of numerous detachments, the regiment's cash composition was reduced to 172 riders.

On October 7, a siding of 9 horses was sent to Mitrovica, led by Lieutenant Goshe de la Ferté.

In the afternoon of October 8, in 7 km south of Mitrovica, he runs into an ambush organized by the 15 of the Hungarian hussars on a small barricaded railway bridge.

And Goshe de la Ferta instantly makes a decision: with a cry of "attack", he, at the head of his squad, rushes straight along the rails - and rushes towards the bridge. There was no time even to expose the saber, but ... it is not known how - but the bridge was passed! The head of the jail wounds one Hungarian with a revolver, another 5 gives up, and the rest rush to Mitrovica. Rangers are pursuing their 7 km, but the garrison of Mitrovica, raised in alarm, encounters a raid of artillery.

The departure goes to the observation, spends the night in the vicinity of the city, but all attempts at dawn to penetrate the city are in vain: the enemy is on guard.

The main forces of the 4 African Horse Ranger Regiment are 9 of October. The Mitrovica garrison is known to consist of an Austrian battalion (500 man), a machine-gun company, a mountain battery and an 1 squadron (200 - 300 sabers).

The regiment throws out a squadron to capture the railway station. Avant-garde platoon met with machine gun and artillery fire. The platoon dismounts, then again sits on the horses and galloping into the loose ranks rushes on the trains standing on the tracks. Secondary dismounting, an offensive on foot, accompanied by horse guards, covered with rolling stock, re-landing - and the burning railway station slips at a gallop. The platoon, pursuing the fleeing enemy infantry, breaks into the city.

At this time, a side marching outpost force of 1 platoon bypassed the city from the east. And the main forces of the regiment support their avant-garde outposts, and in 16.00 the regiment occupies the city of Mitrovica. 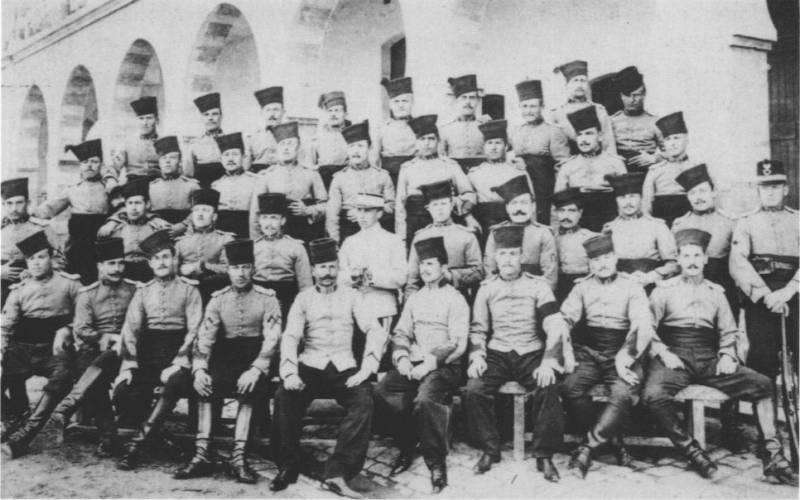 A group of 4 ranks of the African equestrian regiment of horses.

The considered events allow to draw the following conclusions.

The cavalry operating in the mountains should have had a five-day supply of food and fodder on the saddle.

The supply of ammunition was very difficult. Only parts of the pack mules could follow the parts moving along mountain paths. The wheeled wagon train arrived at Uskub only after the departure of the cavalry, and joined the latter only on the Danube - after the regiments stood there for about a week. A lack of supply, it happened, slowed down the development of the whole operation. Each part had to have at least 2 - 4 pack mules for transporting ammunition - without this, the lack of ammunition supply was felt very acutely in the setting of a mountain war.

French forging showed its best side. Before going on the march, forging was from 8 to 10 days. The squadrons had a set of horseshoes on their saddles and, in addition, 100 horseshoes on a special two-wheeled cart. During the march, forging blacksmiths experienced constant difficulties with supplying forging nails. 18-forging nails, which were in a special bag on the saddle, turned out to be too little in the context of a mountain war. The first nail delivery was carried out by an aircraft that delivered from Thessaloniki to Uskub 100 kg of forging nails; second time forging nails needed in Negotin - for the regiment of Moroccan spagi. The cavalry operating in the mountains was sensitive to the issue of forging.

Under the conditions of the mountain war, we had to part with normal wheeled wagon train and replace it with steamer gigs. For cavalry harnesses were required for mules - since the mule turned out to be the best vehicle in the mountains. He could withstand the hike better than others — regardless of whether it was harnessed to a gig, to a cart harness, under a pack or under a saddle. The usual pack saddle turned out to be heavy, tall, with a very limited footprint and quickly tired and wounded the animal. The light pack saddle used by the natives of Africa, Asia and the Balkans was widely used and greatly appreciated in the Balkan armies.

During the lengthy transitions that led the cavalry of the French Eastern Army from the Monastery to the Danube, she knew success - despite the difficult conditions of the mountain theater and the stubborn resistance of the enemy. In 32 of the day, her squadrons fought about 700 km.

From a strategic point of view, the cavalry performed three main tasks:

1. Uskub was taken - and the withdrawal path of the German 11 Army was cut.

2. Covered the eastern flank of the Serbian army during the operation at Niš.

3. A quick throw on the Danube cut off the enemy from Romania and did not allow him to use this powerful waterway.

Depending on the situation, the cavalry sometimes acted quite far from its main forces - as, for example, it was during the operation on Uskub and in the Nis maneuver. Sometimes - in close proximity to their troops, as during the pursuit - in close connection with the Serbian 1 army. And, finally, sometimes directly in the composition of the main forces of the army - as it was in the operation to capture Prilep. The army command always tried to be in touch with its cavalry - using an airplane for this.

In terms of the tactical use of cavalry, it should be noted that the French cavalry of the Eastern Army acted as modern cavalry should. Using and combining mobility and fire power, she, as a rule, fettered the enemy from the front, and sought a solution to the combat task in a bold bypass maneuver. It has always led to success.

In most cases, units forged from the front could, at the right moment, detach from the enemy and join their main forces — so that together with them, finding a weakly occupied place in the enemy’s disposition, use it and paralyze the actions of the latter with a broad maneuver.

In the mountains, maneuver was all the more necessary, since frontal attacks, as a rule, were doomed to failure and ended in heavy losses. Spagi squads and African horse rangers have always widely used their automatic weapon and rifle grenade launchers - to gain a fire advantage. The terrain was used in due measure - all its folds, dead spaces and the smallest irregularities were used for the offensive, which, as a rule, was carried out in small independent columns separated by wide intervals, but always maneuvering and interacting with each other.

More powerful fire support would greatly accelerate the effectiveness of the battle. Trying to fill the lack of artillery, cavalry units sought to act suddenly. The maneuver of the units and the maneuvering of the columns under the cover of each other served, in most cases, as a cause of success and forced the enemy to begin retreat.

African shelves perfectly used not only firearms. They equally used cold weapons in cavalry attacks - demonstrating the traditional impulse and stamina of the French cavalry. There have been cases of cavalry attacks, even without naked cold weapons - as was the case in the actions of the Lieutenant Gosset de la Ferta. Equestrian actions, usually performed by small units, led to a breakthrough and strongly influenced the political and moral state of the enemy. The case at Mitrovica serves as a vivid example of how important the morale of troops is in a war. The position of the city was strong natural properties: a deep river that flowed in steep, steep banks, made it inaccessible in many places and, in addition, there was a solid garrison in 800 people with machine guns and artillery. How is it that such a strong position was taken only by 172 by African horse rangers? The answer is one - the morale of the defenders paralyzed their will to win.

On October 8, when the Hungarian hussars shot down by lieutenant Goshe de la Ferta rushed into the city, it made a huge impression. There was a general alarm, machine guns and artillery opened fire. Conversations are everywhere: "The French are in front of the station." The officer who commanded the Hungarian hussars, who numbered fighters before 300, reasoned like this: “How can you resist this wonderful French cavalry! When they fire at it, it still climbs forward. ”

And the next day, when the African horse rangers entered the city, the Hungarians were no longer in the city.

Or, for example, another characteristic episode.

When the regiment attacked, its eastern flank was covered by a side outpost in the 1 platoon. The enemy, already impressed by the success of the French, sees in this outpost the advanced parts of some large column making a roundabout movement - it seems to him that the only way of withdrawing to the northeast on Novi Bazar is already intercepted and there is nowhere to retreat. He assesses the actions at the station as a demonstration to divert attention. The resistance to this large column, which may be even more, since darkness interferes with observations, is completely aimless ... So was it worth resisting?

Thanks to all this, by the time the French units entered the city, the enemy almost did not resist - the encountered infantry platoon makes only a few shots and kills one huntsman. That's all the loss when taking Mitrovitsy.

Machine guns and guns did not even open fire. But the cavalry operation was crowned with complete success! And at the heart of success lay a bold cavalry attack by Lieutenant Goshe de la Ferté - so productive in spite of the meaning of the famous maxim of General E.-M. Debeny about the specifics of the actions of the modern French cavalry: "Normally, the cavalry fights fire, and maneuvers a horse." 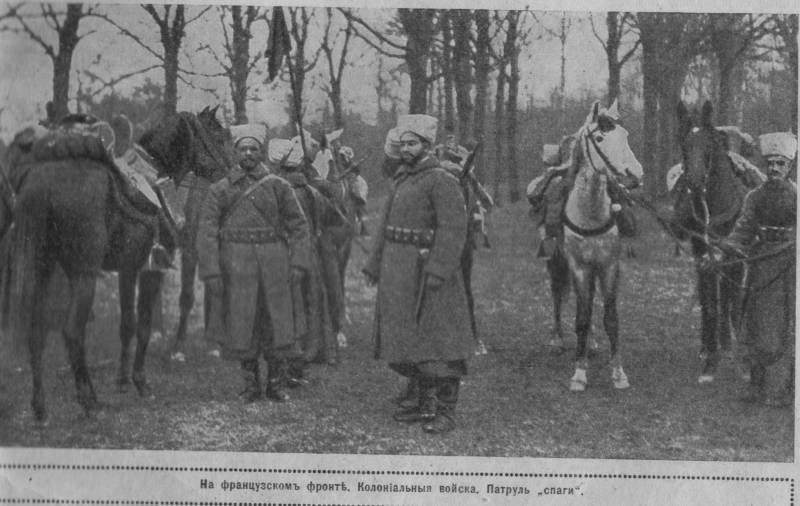 Ctrl Enter
Noticed oshЫbku Highlight text and press. Ctrl + Enter
We are
"Condenser" and "Transformer". About almost mortarsSu-57 and dancing with the wallet
Military Reviewin Yandex News
Military Reviewin Google News
17 comments
Information
Dear reader, to leave comments on the publication, you must sign in.