Held out. There is money. Have a good mood! 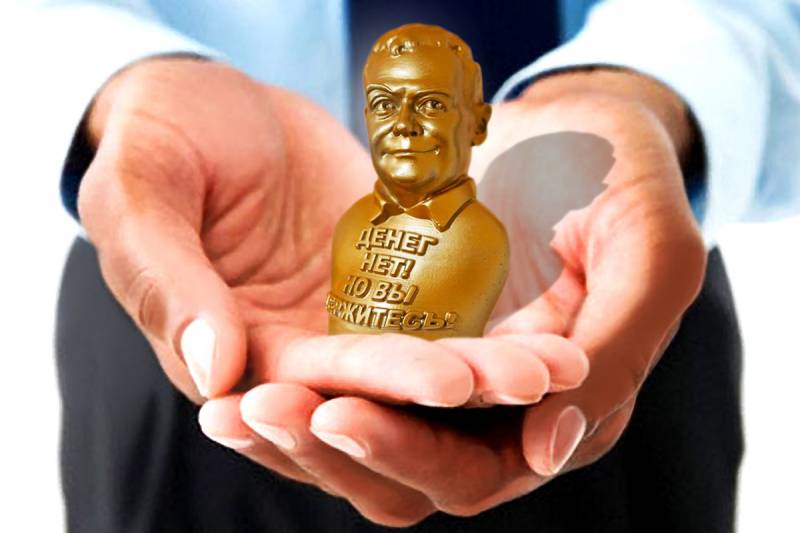 “There is no money, but you hold on,” Prime Minister Dmitry Medvedev uttered and immediately a meteor burst into the sky of Russian literature, eclipsed by itself for the time of our Zlatousta Viktor Chernomidin and Kozma Prutkov. 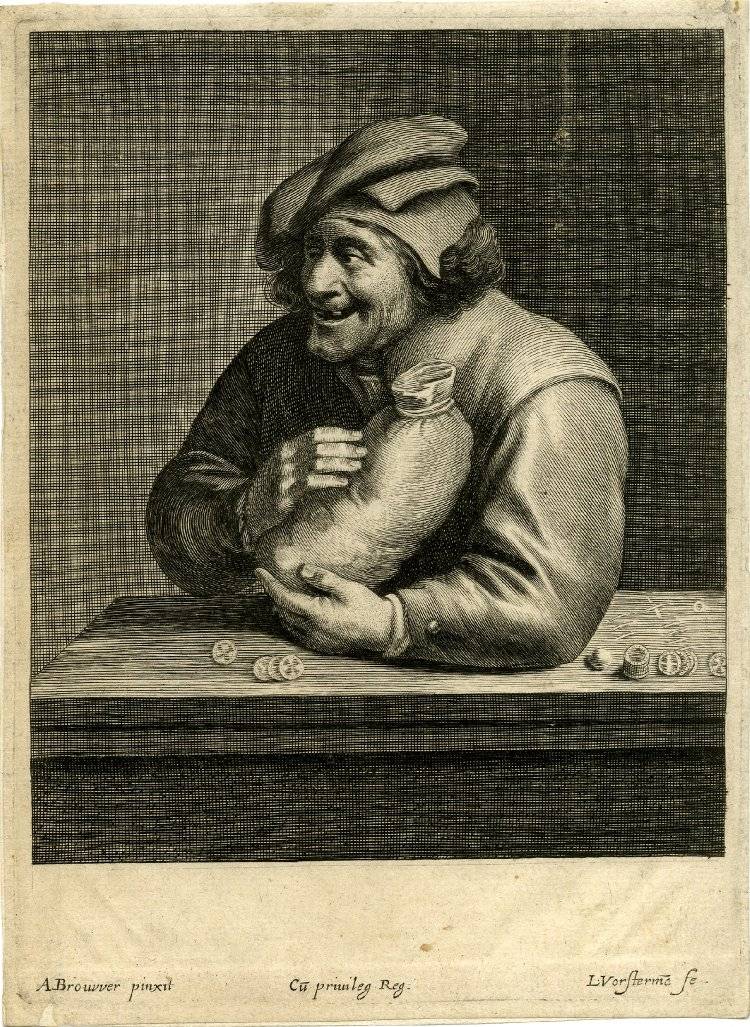 The people understand everything, looking with love eyes and eyelashes blinking. Hold your hands over the air, so as not to fall. The only thing they do not understand is where is the money? Why are they not? Where did they go, cursed money, from our Fatherland?

The war is somewhere far away ... All the warriors of the Syrian contingent can be counted on the fingers of their hands, which, with all our indefatigable salary fantasies, cannot be a super-expensive event. Fathers of the Fatherland mentioned that the cost of the Syrian conflict will be taken from the depths of the Ministry of Defense. There were pennies for military training, so we conduct military training in places where Christian persecutor Saul turned to the head of the Christian church Paul through blindness. And it was on the road to Damascus.

The economic world conjuncture allows the mother of Russia to order new minivans in the form of the World Cup. To build new stadiums for trillions of rubles, to build day and night, of course, the necessary and even vital Crimea Bridge, the longest in Europe. State employees for their work receive a bribe so small that it is hard to see in the microscope. Pensioners have never indulged in our life. Winter has been warm for several years in succession, and this is also a budget savings. Gas, oil pipes flow where it is ordered. Sanctions imposed by world imperialism are vital for agriculture. Only in US government securities one hundred billion dollars dangle. It is not known how much money is frozen in European securities, in both Japanese and Chinese - there should be a lot. The gold reserve is growing. As of 20 on April of this year, the international reserves of the Russian Federation amount to 463,8 billion US dollars. It would seem that all is well, but there is no money. I wish you health and good mood.

When there is no money, deflation should be observed in the economy and life. This is a process where commodity prices fall at relatively stable or somewhat decreasing wages. In our Fatherland, this was the last time under Emperor Joseph Stalin. Three times or four times on New Year the prices for certain groups of goods decreased, you can ask your grandparents about this. The newspaper "Pravda" has consistently noted the growth of trade in the country from lower prices. Deflation leads to a general decline in GDP, expressed in monetary terms, and this looks ugly in reports. With one stroke of the pen, housing and utilities and excise tariffs are rising. These additional costs and do not give the figure subside. 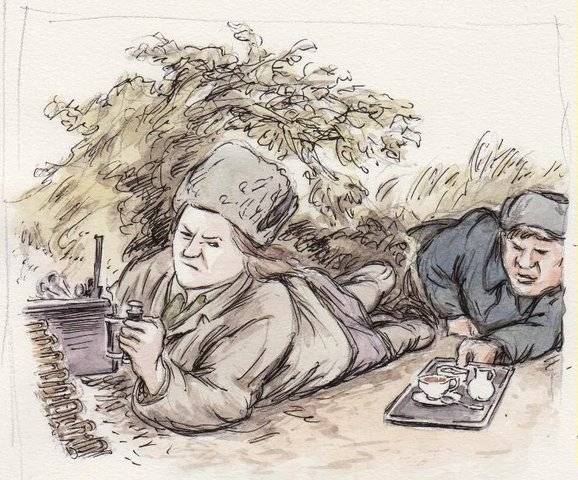 “No, no, there will be inflation,” economists contented with life will answer me.

Will not be. The nature of inflation in Russia depends little on the amount of money in circulation. In Russia, money in circulation has long been lacking. Both cash and non-cash. The maximum inflation (1998 year - 84%) and the minimum inflation (2011 year - 6,1%) were observed with practically the same increase in the money supply, by 21-22%. The increase in money supply in some years was at the level of 50% (these are 1999, 2000, 2003, 2006 years). For example, acceleration to 50% of the money supply growth in 2003 did not lead to inflation acceleration, but to its decrease. A similar situation was observed in the 2006 year.

At the household level, I will say that the author has never received a hand in the form of depositing bills with the image of a snowboarder against the backdrop of Olympic facilities in Sochi. The banknote was issued in 2014, with a circulation of 20 million. And this, please move up, 2 billion rubles. Also, I did not hold in my hands the 2015 sturblev of the year with the image of the Crimea, which is also 2 billion. One such bill falls on 7 people living in Russia! You will laugh, but the cost of such bills on online auctions is approximately 200 rubles.

Crimean bridge, a miracle of the first quarter of the current century. The total cost of the construction project of the Crimean bridge will be 227,922 billion rubles. With the release of bills with the image of a bridge for such an amount, indicated by the estimate, in the wallets of the Russians would be on 1,5 banknotes or a bit more. One and a half hundred rubles banknotes for each. There is reason to think.

12 April 2016, the Central Bank of Russia announced the introduction of new banknotes denominated in 200 rubles. The text of the statement states that the appearance of these notes will simplify monetary operations and will not affect the total amount of money in circulation. New bills will be introduced due to the withdrawal of old ones. The Central Bank stressed that the adoption of this decision is due to the reduction of inflation to 2016-4% planned by the end of 6 of the year.

Due to the old bills, that is, designated for destruction. Here you can already begin to fight in hysterics. Out of circulation withdrawn bills in 5 rubles. Denominations in ten rubles are already very rare. Washed out of circulation and metallic money. Commemorative bimetallic 10 ruble coins are rare. Some issues are worthless money in terms of par - value.

The icon of liberal economists Friedman formulated his famous monetary rule: the money supply circulating in a market economy should increase following the increase in the nominal market value of the GNP produced, it should increase not discretely (intermittently), but constantly, from month to month, and so on. all year.

And further, there is a great thing in this theory: if the money supply circulating in a market economy turns out to be significantly higher than the nominal market value of the GNP produced, then the money supply must be compressed. MORE NOMINAL COST OF Gross National Product. Three times you need to increase the money supply before you begin to compress it! Instead of grumbling, I note that in the first months of this year, the amount of cash in the economy has decreased by 305 billion rubles. On 3,2, the percentage has become less cash. Besides, it must be said that the bills in 5000 rubles make up 75% of all the money in circulation. And bills in 100 rubles - only one percent of the total.

No money, and they need to get. Hand involuntarily reached for the Mauser. To resign, let us reach for the book by A. Gridin “How the Bolsheviks Nationalized Commercial Banks” (1962, “Experience and Documents of the Post-October Days in Petrograd”). This work is a continuation of the book Gridin "How the Bolsheviks seized the State Bank", issued by the State Financial Publishing House in 1961. Not suitable as a means?

A very good example of making money for public use was left to us by the commander of the civil war, Nikolay Shchors.

5 February 1919, Kiev, occupied the Red Army. The commandant of the city was 23-year-old commander of the 2 brigade Nikolay Shchors. Taking out the holster from the holster, he entered the office of the bank, introduced himself and demanded to give him a truly astronomical sum. Hearing that there is no cash in the bank, he became angry, ordered urgently to collect personnel and gave a speech. The reporter was told that communism is fine, but there is no money anyway, because they were withdrawn by depositors. Then the brigade commander demanded that the bank immediately force wealthy clients to return the savings to the accounts. He was objected that the bank does not have such powers. Shchors was amazed at the softness of the old-time employees and ordered him to send him lists of the richest contributors, indicating their home addresses.

Each “money bag” was issued a personal invitation to appear at the meeting of depositors, which will be held at the premises of the Heiman Theater on Meringovskaya Street, 8 (now Zankovetska Street, the building has not survived). The note read: in case of non-arrival, the recipient will be arrested. For greater conviction, these agendas were carried by Red Army soldiers with rifles.

The theater hall was full of brilliant public. Finally the curtain opened, revealing a dark and empty stage. The participants looked puzzled. After a moment, spotlights flared sharply, a gulf of scaffolding with bright light. Shchors appeared from behind the scenes - with a Maxim machine gun. The hall is numb.

The commandant of Kiev, with decisive movements, tucked the ribbon with cartridges, lay down on the floor and brought the "iron agitator" to the crowd. Those sitting in the front rows took to their heels, but the doors of the auditorium were locked. There was no salvation. Silence reigned in the literal sense of death. No one knew whether the queue would be distributed the next second or not. Experienced shock made the right impression on investors. The next morning, the millions needed by the Bolsheviks were returned to the bank.

I'm afraid this show, repeat it in Moscow in 2018 in the theater with ... [censored], the fellow citizens will not like it either.

Peaceful ways to saturate the economy with a lot of money. You can allow the circulation of "Yeltsin's coin", which now in fact does not differ in par value from the walking coins. All the same metal, all the same diameter, all the same two-headed eagle.

According to the experience of tsarist Russia, it is possible to issue stamps - money “walking along with a silver coin”.

You can refer to the experience of Germany and give the right to cities and towns to print "emergency money."

Or you can simply send the economic block of the government into retirement, exile the entire directory of the Central Bank in the taiga ... study Friedman's theory! Now the reason is suitable - the entry into power of the newly elected president, who should (and even is obliged) to dismiss the government.

Dear Comrade President! Find yourself and us a financier who will say: “Hold on. There is money. I wish you good mood and health! ”

Ctrl Enter
Noticed oshЫbku Highlight text and press. Ctrl + Enter
We are
A great interview with Sergey Lavrov: about Ukraine, Obama and IranWhat you didn't want to know about England
Military Reviewin Yandex News
Military Reviewin Google News
135 comments
Information
Dear reader, to leave comments on the publication, you must sign in.