"Comrade Wolf" does not want to be left without fangs

April 30 2018
23
The American strategy is directed against Russia for fundamental reasons arising from the desire of the West to preserve the main lever of its world domination at any cost — an irresistible military might. 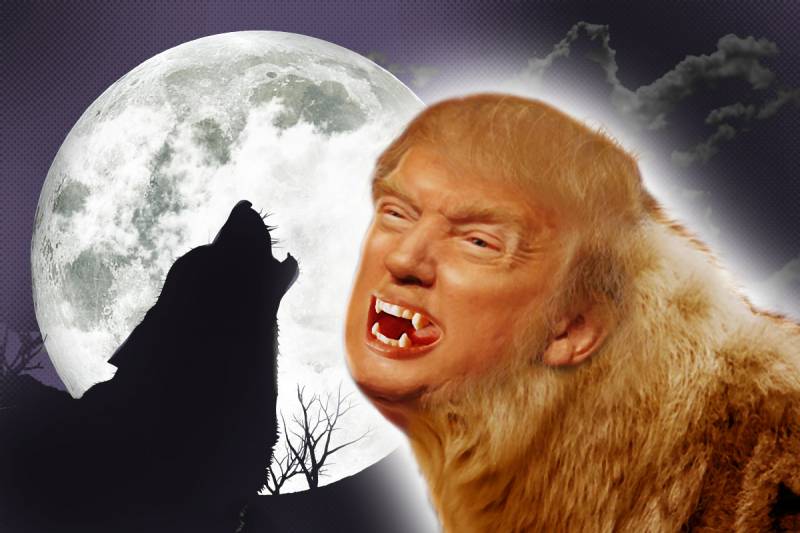 The newly appointed US Secretary of State Mike Pompeo in his first public speech after taking office during the rendezvous of NATO foreign ministers Brussels 27 on April of this year. at least ten times in different contexts declared the “Russian aggression”, which the NATO bloc must jointly oppose. Mentioned, in particular, "Russian aggression" against Georgia in 2008 year, against Ukraine in 2014 year, as well as Russian "cybernetic attacks" and "attempts to undermine Russia's Western institutions."

I will not beat around the bush. And at once I will say that all of the above is a blatant, one hundred percent lie and an attempt to shift responsibility from a sick head to a healthy one.

All that the United States blames Russia for is either an unsubstantiated fiction like the same “Russian interference in the American election,” which no one has ever documented, or “Russian hacker attacks,” which is even less demonstrable than the first, or aggressive the actions of the United States themselves.

It is well known that in 2008, it was Washington who started his Georgian agent Saakashvili to attack Russian peacekeepers in South Ossetia. For which he completely re-equipped and trained his mercenary army. As a result, Russia quite naturally answered. And the attempt by the Tbilisi satrap of America to return the territories separated from Georgia by force ended in complete failure.

It is characteristic that at that time American propaganda also screamed heartily about “Russian aggression” for two weeks, until the irrefutable facts that the Georgian side was the first to open fire became known.

As for Ukraine, none other than the West is the main customer, the direct organizer and financial sponsor of the destabilization of this country and the armed seizure of power through a coup d'état. Former US President B. Obama acknowledged that "the US helped change the power in Kiev," and US State Department spokesman V. Nuland said that this operation cost Washington five billion dollars.

Thus, it was the United States that made an unprecedented trend in relation to Ukraine. stories an act of geopolitical aggression, carried out by the methods of hybrid war. That is, both with the use of financial, political and economic pressure, and through direct armed aggression with the hands of local and foreign gangs hired and trained by US intelligence services. What is the huge amount of documentary evidence, from documents on the military training of Ukrainian militants in NATO countries to throwing foreign (including Georgian) snipers to shoot people on the Kiev Maidan.

The perfidious act of geopolitical aggression of the United States, the outcome of which was the seizure of Ukraine by the West, a country within the closest circle of the Russian Federation, on the situation in which the security of the Russian Federation itself largely depends, put Moscow on the need for immediate and decisive retaliation in order to protect the citizens and regions of Ukraine who opposed the armed insurrection, as well as in the interests of their own safety.

Thus, everything that Washington, in the person of its new secretary of state, blames Russia, is either a direct lie, or an overt and documented aggression by the United States.

The American leadership, whose hands this aggression is carried out, cannot but know the real background of all the events mentioned. And, therefore, is fully aware that their true culprit is not Russia, but the United States itself. That is, senior officials of the American administration deliberately and brazenly lie. Why are they doing that? Consider a few answers.

The first. Because they themselves believe in it. Fully excluded. For they know perfectly well whose hands it is. Since they gave the appropriate orders. So, they clearly do not believe in the anti-Russian nonsense, which is voiced.

Second. The American administration actually sympathizes with Russia and Putin. But, being under enormous internal pressure, she was forced to mimic in a style that Donald Trump himself very clearly said: “No one was tougher in relation to Russia than I was!”

And Trump really gives reason to think so. He uses almost every opportunity to publicize his anti-Russian "coolness". At the same time, without disdain, it is free to interpret the facts in the best way possible for him. For example, recently, during a joint press conference with the Japanese Prime Minister, Trump literally glowed with pride when he enthusiastically lied to the audience that the Russians and Syrians had not shot down a single American missile. And it looked like Napoleon after Austerlitz, when he told about the supposedly epochal battle with the Russians in Syria, victorious for America.

All this could indeed be regarded as a cover-up operation of the White House, which thus beats off from the stalking hawks, demanding "here and now" a sea of ​​Russian blood. In the same context, if you wish, you can also understand the striking situation from a military point of view, in which the US missile attack on Syria turned out to be absolutely bloodless for their adversary.

However, something causes doubt in the foregoing. First, the hawks who are pressing Trump are sitting at almost all key posts in the White House and are simply not physiologically able to formulate a policy towards the Russian Federation. Secondly, any PR campaign has a certain rational framework, beyond which its organizers are absolutely not recommended. In this case, there is practically no such framework. And the Washington administration itself acts as the first violin of the anti-Russian propaganda orchestra, which forms the mass consciousness of the US population in a spirit of fear and hatred towards Russia.

Meanwhile, the mass consciousness is a very serious thing. And besides, it is dangerous, because it has enormous psychological inertia. Which is able to exert a directing influence on the actions of the authorities themselves. The masses, taught by propaganda in a strictly defined manner to respond to external irritants, can no longer perceive any other policy of their state, except that which directly follows from the propaganda myth inflated by the same authorities. And in this sense, the fiction about “global Russian aggression” (by the way, just “Russian paratroopers captured the Central African Republic”!) Inflated by Trump and his assistants! Becomes a self-sufficient factor in shaping US foreign policy.

Americans who have eaten a dog on a global scale media propaganda cannot but understand this. And if they, nevertheless, go for it, it means that this is their real political course, and not just the operation of covering up some hidden and more friendly to Russia policy.

The third option. So, we are not dealing with the self-deception of the American ruling elite, which in principle is impossible. And not with the operation of covering up real politics, which is too dangerous in its given format. But with a fully thought-out, consistent, officially proclaimed and completely hostile to Russia US course.

What does this mean? Washington’s bet on completely false, completely sucked from the finger, completely unsubstantiated accusations against the Russian Federation, put forward on the principle “You are guilty only because I want to eat!”, Speak about its complete lack of readiness for constructive and mutually respectful negotiations with Moscow throughout the circle real problems of bilateral relations.

The prosecution-prosecutorial style of American official rhetoric, which allows for the introduction of any new charges against the Russian Federation at any subsequent time without any objective reasons, simply at the whim of the US authorities, clearly indicates that the strategy chosen abroad is based only on the constant build-up of physical and psychological pressure on Russia, up to its complete surrender.

There was not enough “poisoning” of Skrypal and fiction about the “chemical attack in Syria”; tomorrow they will invent a heartbreaking story about genetic experiments sent by Putin to the gynecologists over the third child of British princess Kate. Or, God forbid, they will blow up their own aircraft carrier if they consider that without this they can’t cheer up their European allies.

Everything depends only on their subjective assessment of the degree of danger of Russia to the system of global dominance of the West. And the point, of course, is not in international law, to which the United States itself has long spat. And not in the completely mythical threat of Russian propaganda - it would be good for the Russian Federation not to fall victim to Western propaganda on its own territory. But the fact that Russia, in a whole range of parameters, is really really dangerous for this world empire.

First of all, just as a country that is raising the flag of disobedience to the will of the world hegemon higher and higher. And such an example in itself is highly undesirable. But one thing, if it comes from some Venezuela, which, in extreme cases, you can roll up in the asphalt. And it is quite another when the nuclear superpower, with which this “asphalt” is enough for the whole of America and Europe to the bargain, becomes the head of the anti-Western front.

But this is not all American grievances against the Russian Federation. By its actions in the international arena, Moscow is indeed threatening “Western institutions”, understood as a global prison for nations and states. Russia with its ability to invent and produce more and more perfect weaponat the sight of which, even at the West itself, a nervous tic begins, gives almost the whole world a chance to overcome the global adversary in his own favorite field - in the sphere of military confrontation.

In particular, the increasingly effective Russian air defense / missile defense systems, to the acquisition of which more and more countries are not indifferent, threaten to completely neutralize the two main military trump cards of the West - cruise missiles and combat Aviation. After which he, besides the basically inapplicable nuclear weapons, will have nothing left at all. All these beauties with the heroic adventures of the US Marine Corps on the enemy coast, are good only on the set of Hollywood.

Aware of this very real threat, Washington is now making tremendous efforts to ban all countries of the world even thinking about acquiring such an anti-American anti-missile "umbrella". It has already reached the point that the US threatens its official ally of Turkey to deprive it of its supply of the latest F-35 fighters (which is financially necessary for Washington itself) if Ankara finally adopts the C-400 Russian air defense system. But the Turks understand perfectly well the geopolitical background of this American game, and that is why the Americans will cover the peak with Russian missiles. And then everywhere - the Philippines, Iran, Iraq, Pakistan, Indonesia, the entire Middle East, South America, etc.

That is, the prospect of the loss of its main geopolitical advantage - a non-invincible military club - looms before the West. And this, you will agree, is a very, very significant reason for settling accounts with the main troublemaker - the Russian Federation. In stating this fact is the main point of our reasoning. The West really has very good reasons to fear Russia. Like any predatory beast at the sight of an adversary that can break the integrity of his skin and break his teeth.

Ctrl Enter
Noticed oshЫbku Highlight text and press. Ctrl + Enter
We are
Situational analysis of the death of the MH17 flight (Malaysian Boeing 777), made on the basis of engineering analysis from 15.08.2014Results of the week. “In our cooperative, the board is always agreed”
Military Reviewin Yandex News
Military Reviewin Google News
23 comments
Information
Dear reader, to leave comments on the publication, you must sign in.