Two Koreas: the end of confrontation and the way to a bright future

April 28 2018
61
The inter-Korean summit, in the opinion of both sides, was brilliant and opened up broad prospects for the development and unification of Korea. 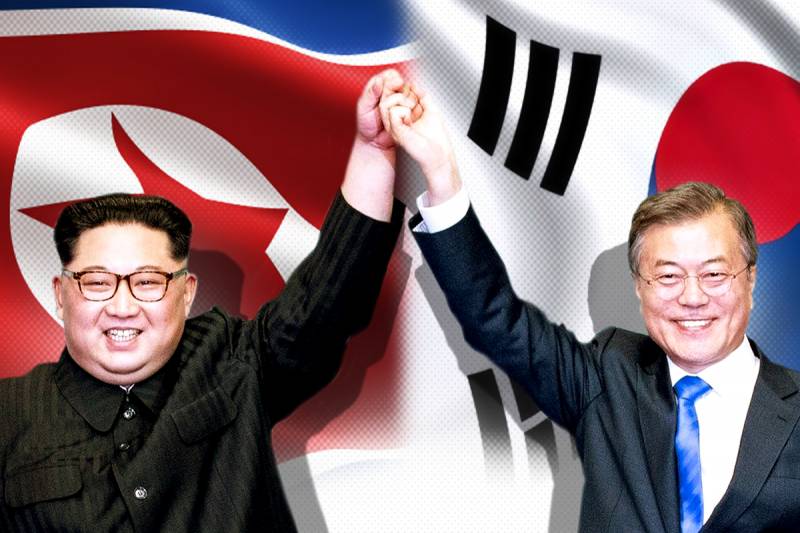 "The North and the South will seek full and comprehensive improvement and development of relations and thereby bring the future together prosperity and reunification," says a joint declaration on the results of the summit of the leaders of North Korea and South Korea.

It is already known that the Korean leaders decided to put an end to the confrontation, to establish a rail link between the countries, to hold a meeting of divided families. And, of course, it was about restoring and expanding economic cooperation.

The last point is undoubtedly one of the most important and promising: there is little doubt that the combination of South Korean technology and cheap labor in the event of successful integration processes will provide a powerful economic breakthrough in the international market.

There is every reason to believe that the meeting was not at all impromptu, and it was preceded by a long and serious preparation. Moreover, with the participation of diplomats from Russia and China, the two countries that are of the highest degree (if not counting both Korean states) are interested in ending the conflict on the peninsula. Actually, the movement of Pyongyang and Seoul that began during the Winter Olympics towards each other was preceded by serious work, which for obvious reasons was not advertised.

Recall that the meeting itself was held not from scratch. And her agenda was quite expected.

Back in July, 1972, a joint statement of the North and the South was signed, which set forth the basic principles of unification, which became basic, including for the current meeting: independently, without reliance on external forces; in peaceful way; based on the "great national consolidation."

Moreover, the country's unification in Pyongyang is seen by creating a confederation (Confederative Democratic Republic of Korea) according to the formula “one nation, one state - two systems, two governments”.

In 1991, the DPRK and the ROK concluded an Agreement on reconciliation, non-aggression, cooperation and exchanges; in 1992, they adopted a Joint Declaration on the denuclearization of the Korean Peninsula.

The 13-15 of June 2000 was held in Pyongyang for the first time in stories inter-Korean summit. According to its results, Kim Jong Il and Kim De Jun, who was President of Kazakhstan at the time, signed the North-South Joint Declaration (June 15), now considered as a fundamental document in the long-term unification. In the declaration, in particular, announced the intention of the parties to seek unification of the country "by the forces of the Korean nation itself."

2-4 in October 2007 of the year in Pyongyang hosted the second inter-Korean summit meeting, at the end of which Kim Jong Il and RK President Roh Moo-hyun signed the Declaration on the Development of Inter-Korean Relations, Peace and Prosperity, developing ideas and principles of the 2000 Joint Declaration of the Year.

However, the main problem of the Korean dialogue was its instability. If the North is able to pursue a consistent policy, ensured by the continuity of power, then the South’s approach to the issue of unification is tied to the position of the next president, or rather, the degree of his personal dependence on the United States, who are least interested in creating a unified Korean state.

Thus, the integration processes slowed down, and then were frozen after South Korean President Lee Myung-bak came to power in 2008 in the year.

The pretext for the complete cessation of contacts was the death of the South Korean corvette "Cheonan", which 26 March 2010, sank in the Yellow Sea. Before sinking, the ship, which carried out the planned patrol of the area, split in two. There were 104 people aboard, 46 sailors died.

Pyongyang was blamed for the tragedy, despite the obvious lack of motivation for such actions. An international commission led by the United States, created to investigate the incident in which representatives of the DPRK were not allowed, said that the corvette was flooded with a torpedo launched from a North Korean submarine.

And this is despite the fact that the Minister of Defense of the Republic of Korea, Kim Tae Yong, stated that the corvette sank from the explosion of one of the sea mines that were set up in these waters in the seventies.

And the first conclusion of the international commission was the statement that the corvette was "destroyed by a torpedo made in Germany" (which could not be in service with the North Korean Navy).

It is noteworthy that a number of South Korean experts also challenged the final conclusions of the commission, pointing to the impossibility of an imperceptible torpedo attack of the ship, which at the time of death was accompanied by two ships, high-speed boats, airplanes, and was monitored by tracking satellites. In addition, in the area of ​​the incident were the US Navy ships with their early warning system "Aegis".

In addition, experts pointed out that the torpedo remnants were too corroded, which could not rust so deep in just one month in the water.

Although the incident with the "Cheonan" was a great reminder of the story of the cruiser "Men" and was an obvious provocation by the opponents of the Korean alliance, he fulfilled his task. The dialogue was terminated, and there was a distinct threat of renewed armed confrontation between the two parts of the same people.

Today, there are no less opponents of a Korean settlement. So, for example, Japan sees in a united Korea not only a dangerous economic rival. The united state, which also has nuclear weapons, will not leave Tokyo with the slightest chance of possession of the Liancourt Islands, the sovereignty over which the Japanese dispute with Seoul.

By the way, in the case of the reunification of the Korean states, the question of the denuclearization of the peninsula, may cease to be relevant for the southerners. Even today, in Seoul, supporters of the unification tend to view Pyongyang’s nuclear missile program as a “general Korean resource.”

There is nothing to say about the losses of the United States from the rapprochement of North Korea and Kazakhstan - economic, political and geopolitical. To begin with, the Korean Confederation, if it occurs, automatically ceases to be a US military ally, and the American military presence on the peninsula (including missile defense systems) becomes redundant. Actually, even the very fact of today's negotiations of Kim and Moon quite clearly denotes in the eyes of the world community the true role of the United States as the main culprit in the Korean conflict, which constantly provokes the growth of tension and hinders the resolution of the conflict.

Trump formally endorsed the meeting of the Korean leaders, but through his teeth. “After a turbulent year of rocket and nuclear tests, a historic meeting takes place between North and South Korea. A good deal, but only time will tell! ”- wrote the American president on Twitter.

But he could not say anything else, as well as ignore the event. According to incoming reports, in Washington, the actions of Seoul, who went to the "separate" negotiations, are considered almost as a betrayal. Including because they seriously limit the ability of the United States to put pressure on the DPRK.

Based on this, there is every reason to expect new provocations - from armed incidents and terrorist attacks, to attempts to change power in Seoul.

Moreover, the Korean unification may be hindered not only by the Americans. Since in Seoul, many see the integration of the two parts of the country not as a union, but as the reunification of North Korea with South. With the obligatory dismantling of the political system of the DPRK, with "lustration" and the pursuit of "regime servants".

Be that as it may, the Korean people once again set off on a long journey, on which many obstacles and dangers await them. After all, even such a seemingly most realistic and top-priority step, as economic cooperation and association, has many “pitfalls”. But there is no alternative to this movement.

Ctrl Enter
Noticed oshЫbku Highlight text and press. Ctrl + Enter
We are
Situational analysis of the death of the MH17 flight (Malaysian Boeing 777), made on the basis of engineering analysis from 15.08.2014Syria: Americans scare themselves, and Asma Asad buys chairs
Military Reviewin Yandex News
Military Reviewin Google News
61 comment
Information
Dear reader, to leave comments on the publication, you must sign in.