Mortars: the evolution of large caliber 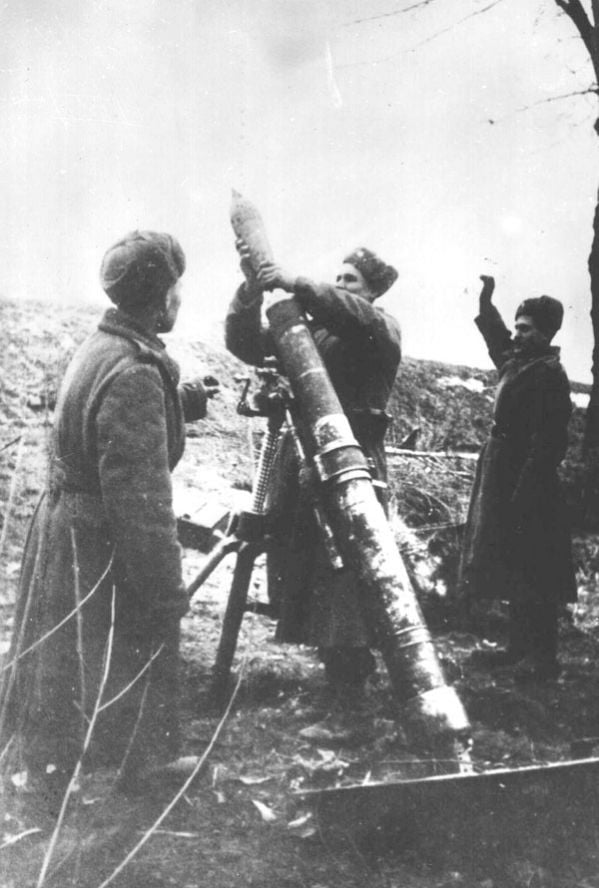 Before we continue the mortar theme, we want to say a few words to those who carefully read. Yes, we are not professional mortar gunners, but we know perfectly well what a mortar is and its work was tested in practice. On myself. In different places.

That's why they took up this topic, maybe from an amateur point of view. But this is not about mortars in general, with the consideration of all the models that were invented in the world, but about the most interesting solutions in the mortar case.

The article that we bring to your attention today is a continuation of our review of unconventional design solutions used to create mortars. In the previous article, we looked at mortars of small calibers. Today we will start a conversation about large calibers, deliberately losing mortars of medium calibers.

Today a mortar of a large (from 100-mm) caliber is not surprising. Rather, surprise little. And the famous 82-mm are familiar to almost everyone. Someone remembers with love, someone with hate. Depending on who shot or who was shot at.

World War I showed the need for this kind weapons. Positional for the most part, this war dictated the designers "order" for such weapons. Small calibers proved to be excellent "in the open field". But with a long defense, when the enemy digs into the ground, when serious engineering fortifications are built, a small caliber was useless.

It was necessary to have such a weapon that could hit the enemy, even with an indirect hit or in fortified dugouts and crevices. Simply put, it was necessary to create a weapon capable of shooting more powerful ammunition. Hence the development of larger calibers for mortars.

The first large-caliber surprised the French. Already in 1916, the monster was created and put into service! Mortar 240 LT mod. 1916! 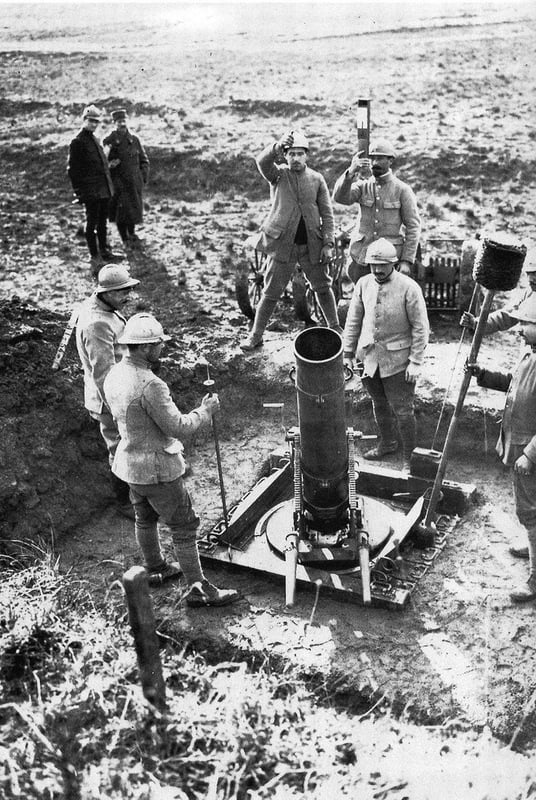 Mortar is really heavy - 1700 kg. Installed on a fixed platform. For transportation understood on 4 parts. Preparation of the position for this mortar calculation (7 people) took from 12 hours to days. It was necessary to open the position, level the platform under the mortar, assemble and disguise it. 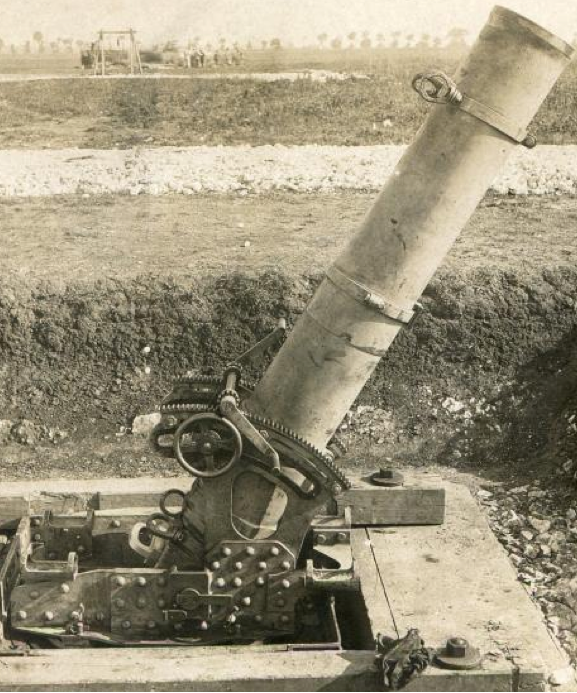 Immediately after the adoption of the 240 LT mod. 1916 revealed that despite the enormous power of the mortar, using it as a mobile was problematic. More than one and a half tons of weight, even in a state divided into parts, were a very serious argument for making a mortar smaller. 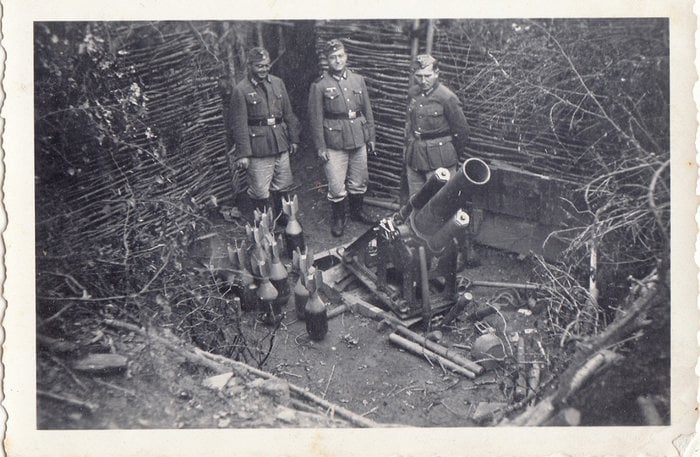 It seems that with the advent of this mortar transportation problems have been resolved. But the army made new demands. Quick bringing into combat and fast moving around the battlefield. Faced two requirements - power and ability to move. And the mortar again "lost."

In 1935, the heavy 120-mm mortar Mle1935 (Brandt) was adopted by the army. This mortar could already be transported by road, in the back of a truck, or on a trailer near a tracked tractor. Moreover, the presence of wheel travel allowed the calculation to move the mortar over short distances on its own. 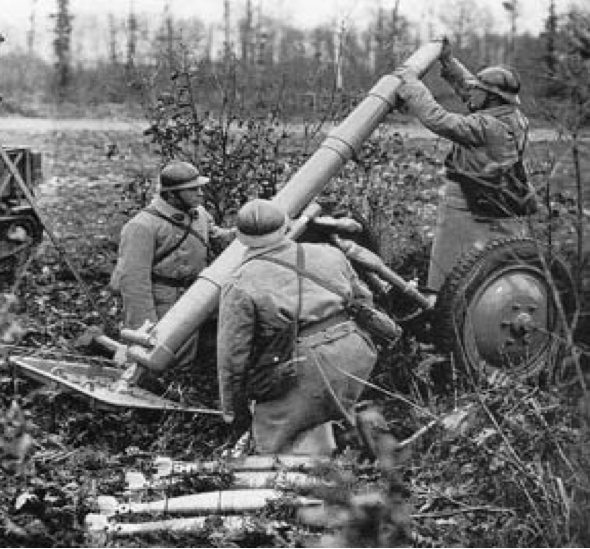 Mines for this mortar were developed for various purposes. Fragmentation, high explosive, incendiary, smoke and lighting.

And, the main requirement of the army was fulfilled on this mortar. The calculation from the 7 man transferred the gun from the marching to the combat position in 2-3 minutes. 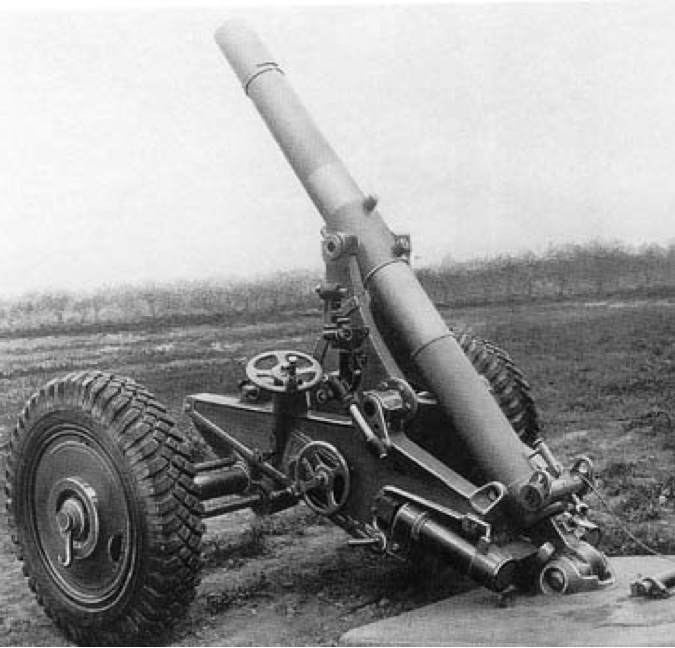 The development of Soviet mortars went a completely different way. The young republic inherited several types of mortars and bomb bombs from the tsarist army, including the 91-mm bomb GR and 58-mm mortar FR. Both samples fired above-caliber ammunition and had a short range of fire. 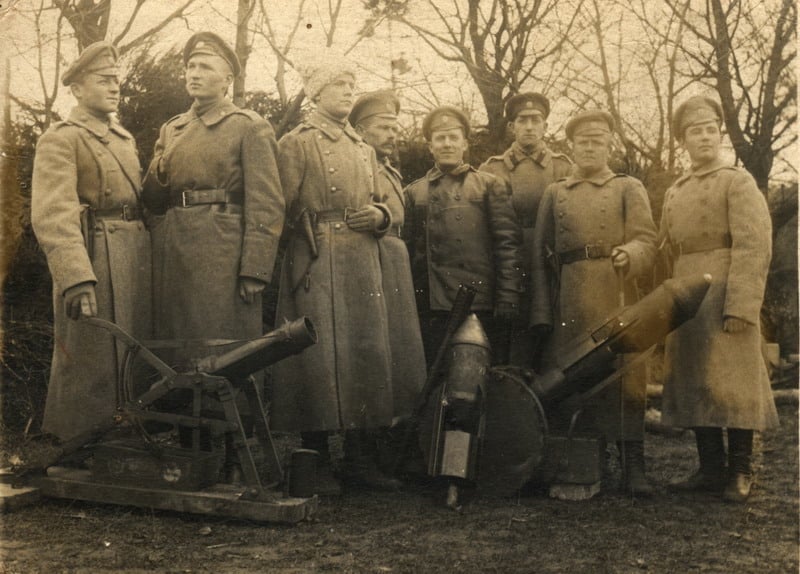 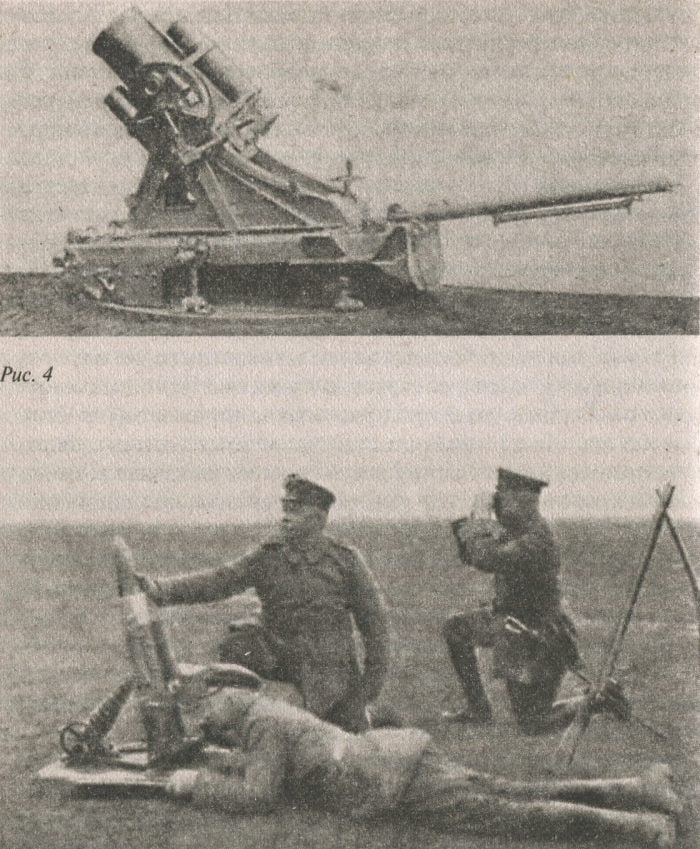 That is why the Special Artillery Experiments Commission (KOSARTOP) was created as part of the Main Artillery Directorate, which was included at the end of 1927 and early 1928 of the design and testing group "D" of the gas-dynamic laboratory of the Artillery Research Institute (head N. Dorovlev). It was this group that created the first Soviet 1931-mm mortar in 82, which was put into service in 1936 year as a BM-36 battalion mortar.

A simple question arises: where are the heavy mortars?

The fact is that in parallel with the D group, engineer Boris I. Shavyrin from the special design bureau No. 4 at the Leningrad artillery plant No. 7 began working on mortars. Mv Frunze (Arsenal plant).

Many readers are puzzled as to why our designers were engaged in small and medium caliber, but did not deal with heavy mortars. The answer is simple. "Monkey" effect.

Most European armies were armed with 105-mm mortars in the regimental unit. It was precisely the foreign 105-mm that gave rise to our mountain-pack mortar 107-mm, which we wrote about in the previous article.

But the "parent", we repeat what was written above, the French Mle120 (Brandt) 1935-mm mortars became! It was they who persuaded the leadership of the Red Army to support this particular caliber. Therefore, our first X-NUMX-mm mortar PM-120 is very similar in construction to the 38-mm BM-82. 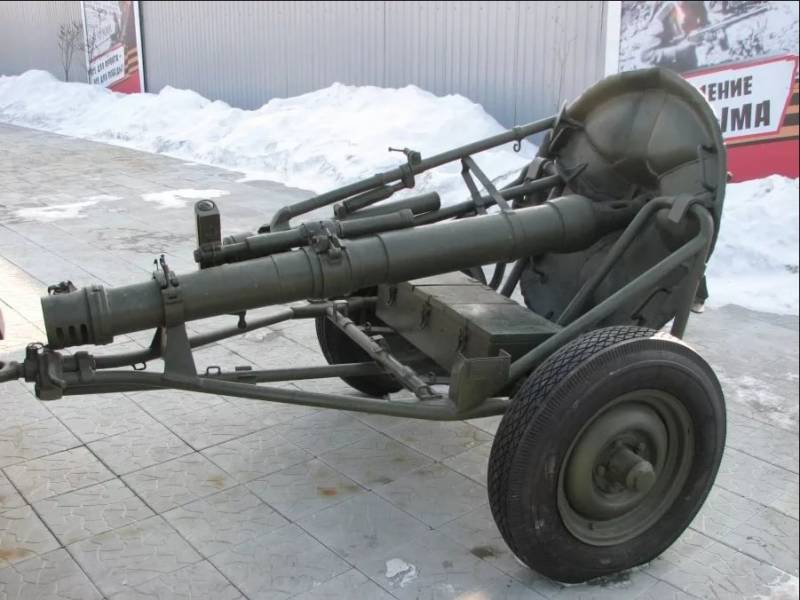 Mortar was wheeled. The wheels had detachable metal wheels and tires filled with spongy rubber. The carriage was made by a four-horse cart. The mortar could also be transported in a trailer behind a car at a speed not exceeding 18 km / h when driving on cobblestone roads, and at speeds up to 35 km / h when driving on an asphalt highway.

The modernization of the mortar continues with the beginning of the war. And already in 1941, the 120-mm PM-41 is adopted. The designer simplified the barrel somewhat, installed a screw breech and a simpler shock absorber with a larger stroke. In addition, the design of the tripod and the swivel and lifting mechanisms are slightly modified. 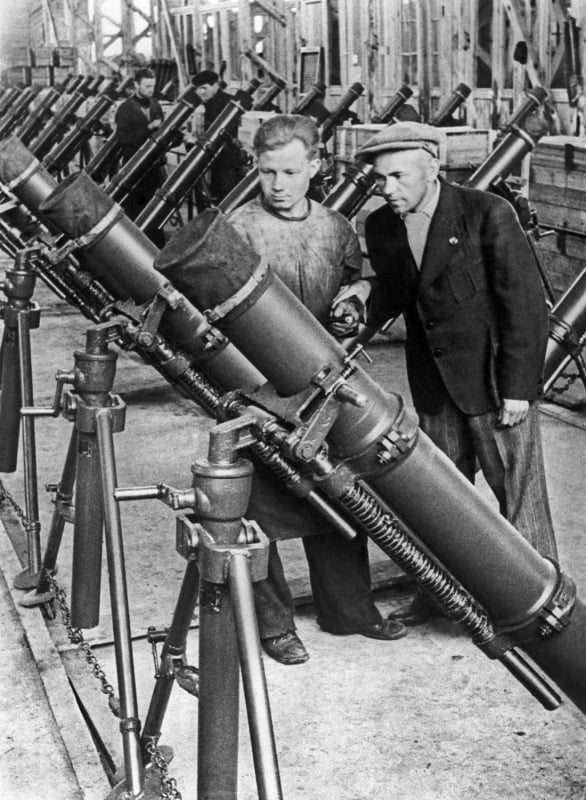 In 1943, the next modernized MP-43 mortar was adopted. Notable for an improved shooting device, which was disassembled without screwing breech. It was installed with longer shock absorbers and a swinging sight, which greatly simplified the leveling mechanism. In 1945, an improved sprung move was given to the car for towing. 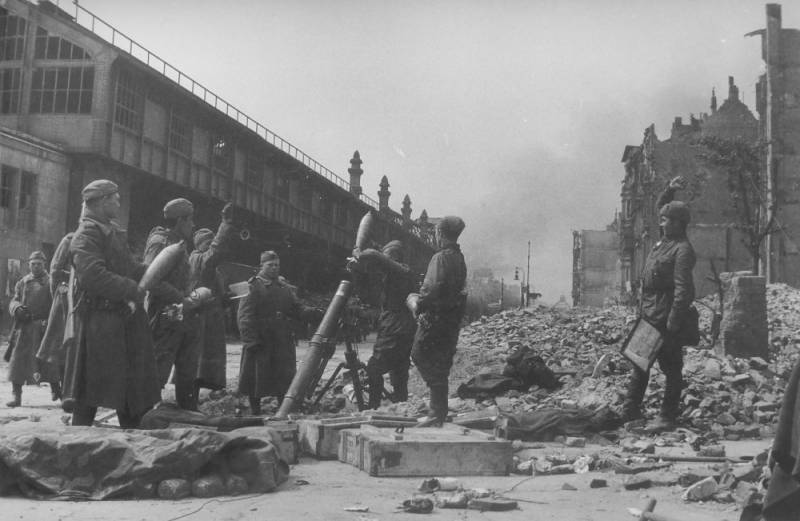 So, the development trends of the French and Soviet design schools were completely opposite. The French went from a larger caliber to a smaller one, we from a smaller to a larger one. The Soviet designers, inspired by the success of the 120-mm mortar went further. 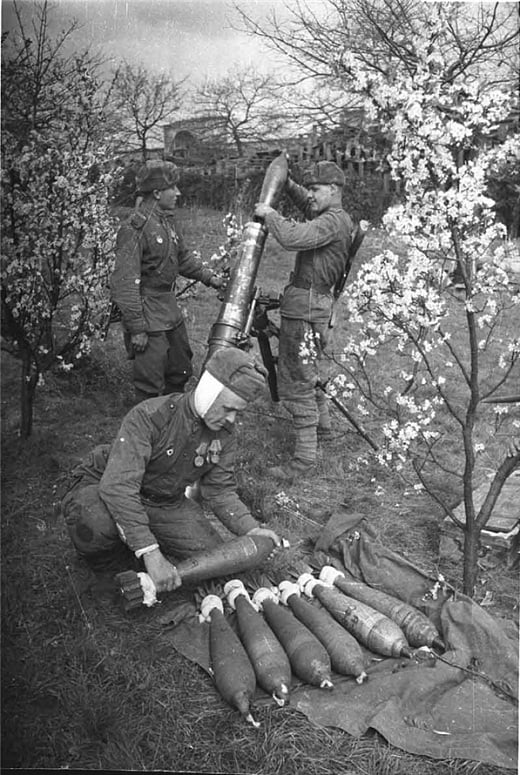 Moreover, it was the Soviet designers who changed the very purpose of the mortar.

At the beginning of 1942, the research institute of the People's Commissariat of Arms began the development of a new 160-mm bomber-loaded mortar caliber 160-mm. Initially, the work was led by G. D. Shirenin, but in December 1942, the group was headed by IG Teverovsky. Already in the 1943 year, in the Urals, under the direction of L. G. Sershenya, a prototype 160-mm mortar was manufactured under the symbol MT-13. 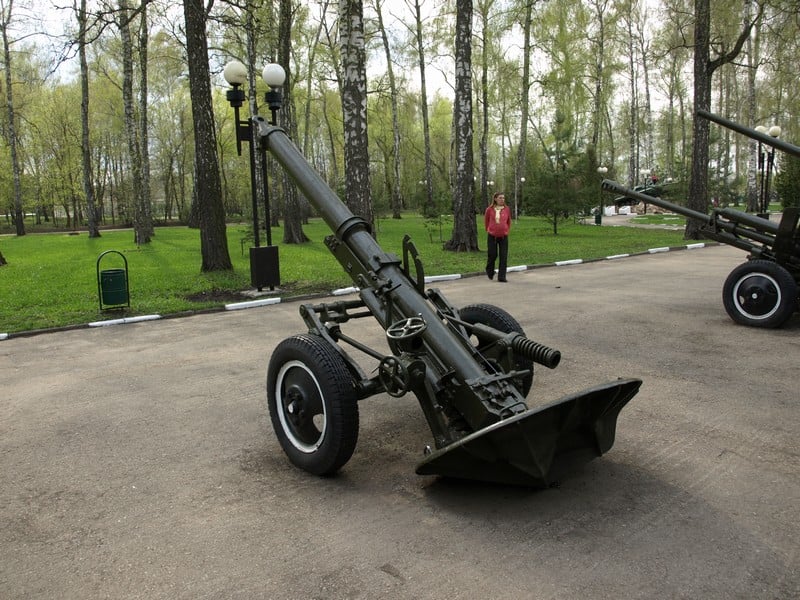 State tests were carried out, which were personally approved by I. Stalin and 17 in January 1944, MT-13, was put into service under the name "160-mm mortar rev. 1943 g.". The troops received a weapon not a defense, but a breakthrough!

The objectives of this mortar was not only the struggle against manpower, but also the destruction tanksdestruction of bunkers and bunkers, destruction (suppression) of artillery and mortar batteries, especially important targets, making passages in wire fencing, destruction of trenches and trenches. Simply put, a mortar is used where guns cannot be used or it makes no sense to attract smaller mortars. 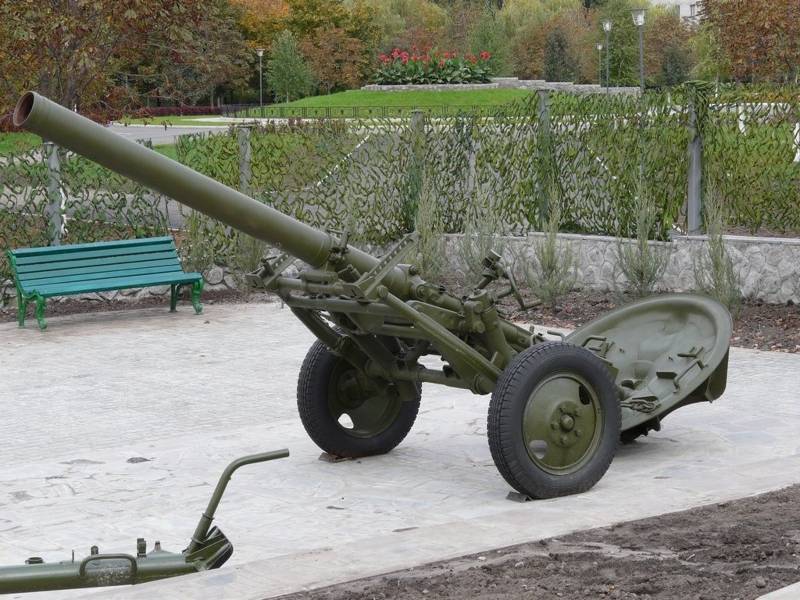 Shooting is a high-explosive mine with a fuse GVMZ-7, which has two settings. Fragmentation and high explosive action. Weight mines 40,865 kg. The weight of the bursting charge is 7,78 kg.

The MT-13 mortar was towed only with a mechanical strut. In this case, for the first time in the world, the barrel began to serve as a trailer device, since the problem of towing a mortar was solved in a very peculiar way. The mortar was attached to the tractor with a barrel on which a special pivot foot was attached.

The sprung wheel travel of the mortar made it possible to transport it at speeds up to 50 km / h, which is very significant for that time.

The barrel at the same time served as a lever that allowed the base plate to be turned out of the ground if it burrowed (and it burrowed, and how) when firing into the ground. The entire combat crew hung on the barrel, and if that did not help, then the swinging paw was put on it, the mortar clung to the tractor, which pulled out its plate.

During the Second World War, no army in the world had such a powerful mortar as the MT-13 and, at the same time, a mobile one.

From 1943, the MT-13 mortars were equipped with heavy mortar brigades that were part of the RVGK breakthrough artillery divisions. Let us once again notice the breakthrough divisions, that is, specialized in offensive operations. 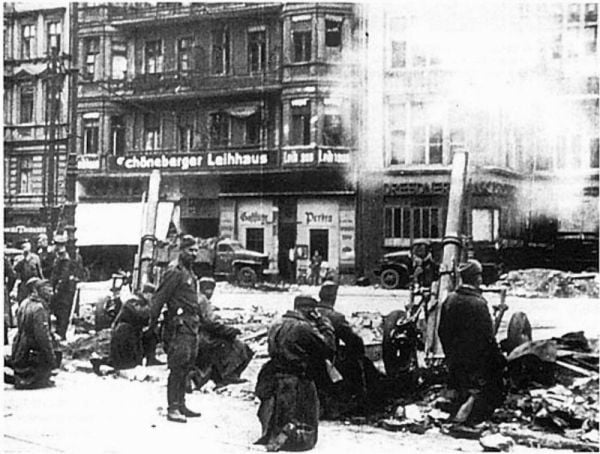 In each brigade there were three divisions (12 mortars in each). The very first combat use of 160-mm mortars had an enormous psychological effect on the enemy. The shots of the MT-13 were deaf, the mortar mines flew along a steep trajectory and fell almost vertically, so in the first cases of use it was noted that the Germans were starting to issue air-raid alerts.

The mortars described in this article are truly epochal. Each of them has its own "flavor", its feature, which is then used in many other designs. Moreover, even today this weapon is actual and is used in the armies of some countries. Not the most advanced, but a lot of time has passed.

Design thought does not stand still. Ideas arise constantly and sometimes translate into products. Ideas are in the air. The story of the development of these ideas in our time ahead ...

Ctrl Enter
Noticed oshЫbku Highlight text and press. Ctrl + Enter
We are
Su-57 and dancing with the wallet
Military Reviewin Yandex News
Military Reviewin Google News
26 comments
Information
Dear reader, to leave comments on the publication, you must sign in.