The spiritual symbol of Barcelona

5 May 2018
157
The last time we met with the Cathedral of Barcelona, ​​but this, let's say, is not the most famous object of religious architecture of this city. The most is, of course, the temple of the Holy Family, whose name completely sounds like this: The Expiatory Temple of the Holy Family. And this is exactly the temple, that is, the church in Barcelona, ​​and not the cathedral. The difference is this: it is accepted to call the cathedral that temple in the city where the episcopate chair is located. That is why the Diocesan Temple of Barcelona is the Cathedral of Saint Eulalia, and not at all the Temple of the Holy Family, although it looks so unusual and is built according to a project that was created by the famous Spanish architect, one can say the great architect, Antonio Gaudi. 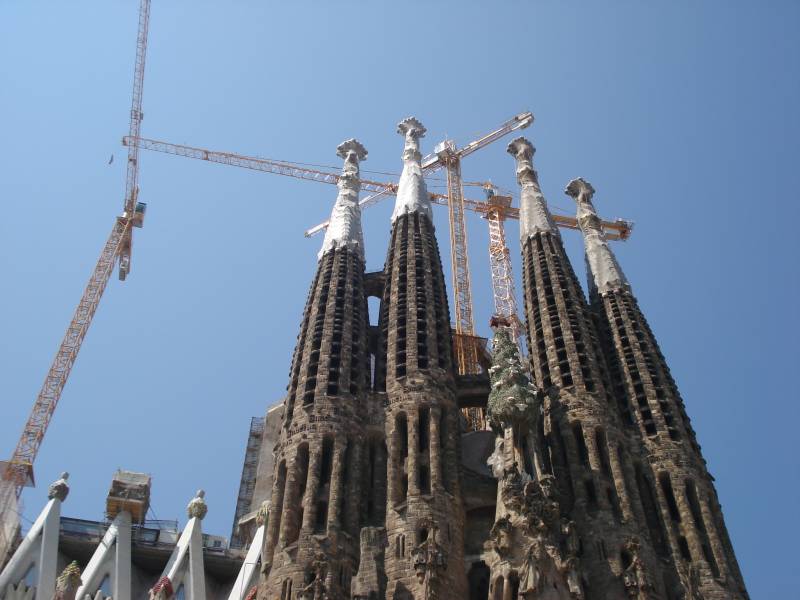 The construction of the temple is in full swing ...

This temple is unique in that it is one of the world's most famous “long-term construction projects”. Why? Because, for some reason, the initiators of its construction at one time thought that it should be carried out only on voluntary donations. And they are going, yes, of course, but not always regularly and in the desired volumes. And then, it uses very complex stone blocks that need very careful processing and individual fit. 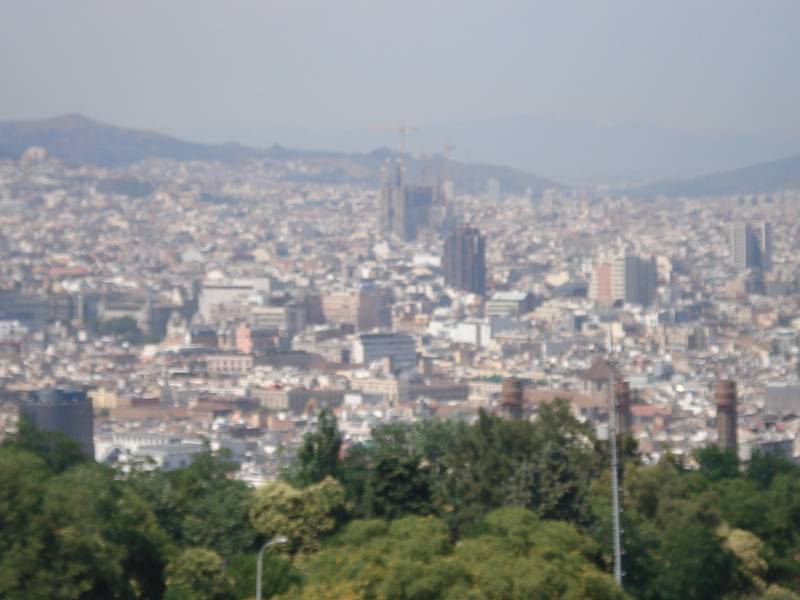 And this is how it looks in a hot city haze from the top of Montjuic.

And, of course, everyone who heard about him is attracted by his appearance, which made him today one of the main attractions of Barcelona. For example, in 2006, 2,26 was visited by a million people at its construction, as many as at the Prado Museum and the Alhambra Palace.

Despite the construction in this temple, which has the official title of the Little Papal Basilica, divine services regularly take place (official consecration was held on November 7 on November 2010 by Pope Benedict XVI). That is, this temple is not only a very important and popular tourist attraction for the city, but also an active Catholic church. 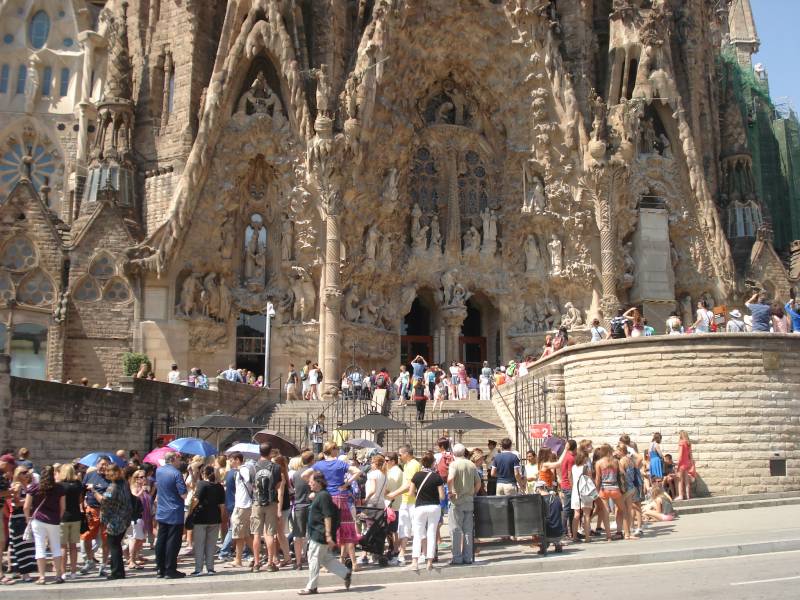 This is the queue at the entrance. It moves slowly. People ... darkness, and you have to stand for several hours in the heat to get inside. For tourists coming here by bus, the task is almost impossible.

Interestingly, the construction of the temple goes on a plot of land that does not belong to the Church, and is not supervised by the Barcelona Episcopate. That is, as it was this "folk construction", so it remains so to this day, and indeed this temple itself is also "folk" in essence! 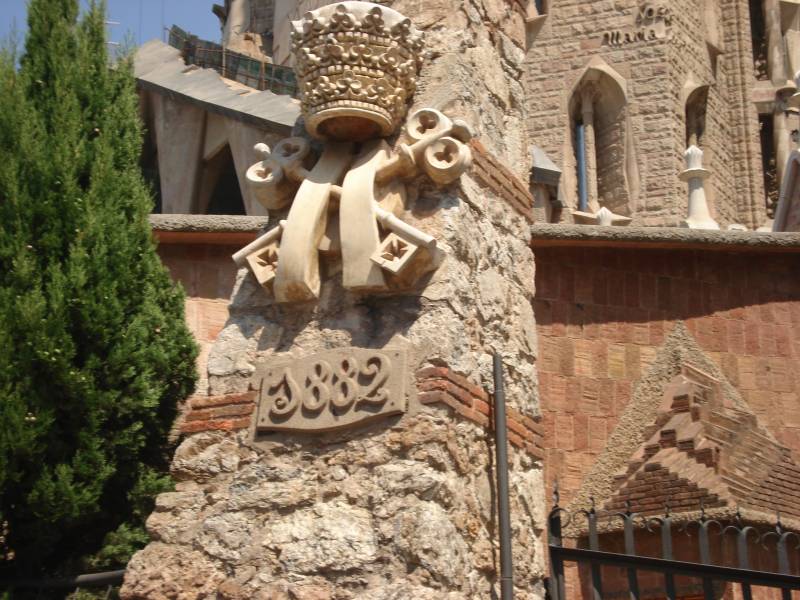 Well, ah история This is truly amazing in all respects the structure is. The idea of ​​construction was born in 1874 year. Then, in 1881, a land plot was acquired for donations in the Eixample district of Barcelona, ​​which was in those years ... far from the city. The foundation stone for its foundation was laid on 19 March 1882, and this very day is considered to be the beginning of its construction. The original project belonged to the architect Francisco del Villar, and according to him, the temple was a neo-Gothic basilica, shaped like a traditional Latin cross, with five longitudinal and three transverse aisles. But it turned out that at the end of 1882, del Villar began to disagree with the customers and he left the project, after which the management of the work was transferred to Antonio Gaudi. 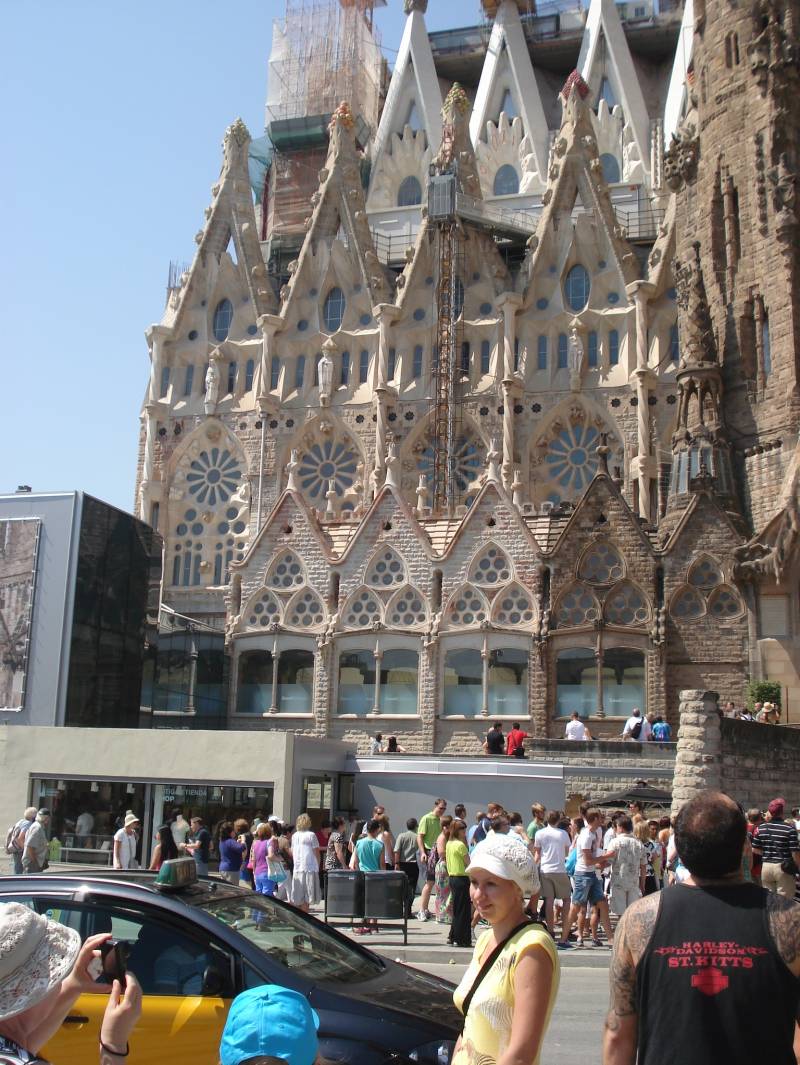 Taking pictures on the background of this temple is quite difficult. From afar - uncomfortable. And close it turns out, either the top or the bottom gets into the camera.

At first, Gaudi continued to embody the plans of his predecessor in stone and construction proceeded according to a previously approved plan. But then it happened that Gaudi received an unprecedented generous donation from an anonymous author and ... decisively reworked the entire project. He decided to crown the temple with many monumental towers, and to give all the elements of the cathedral, both inside and outside, a deeply symbolic meaning. 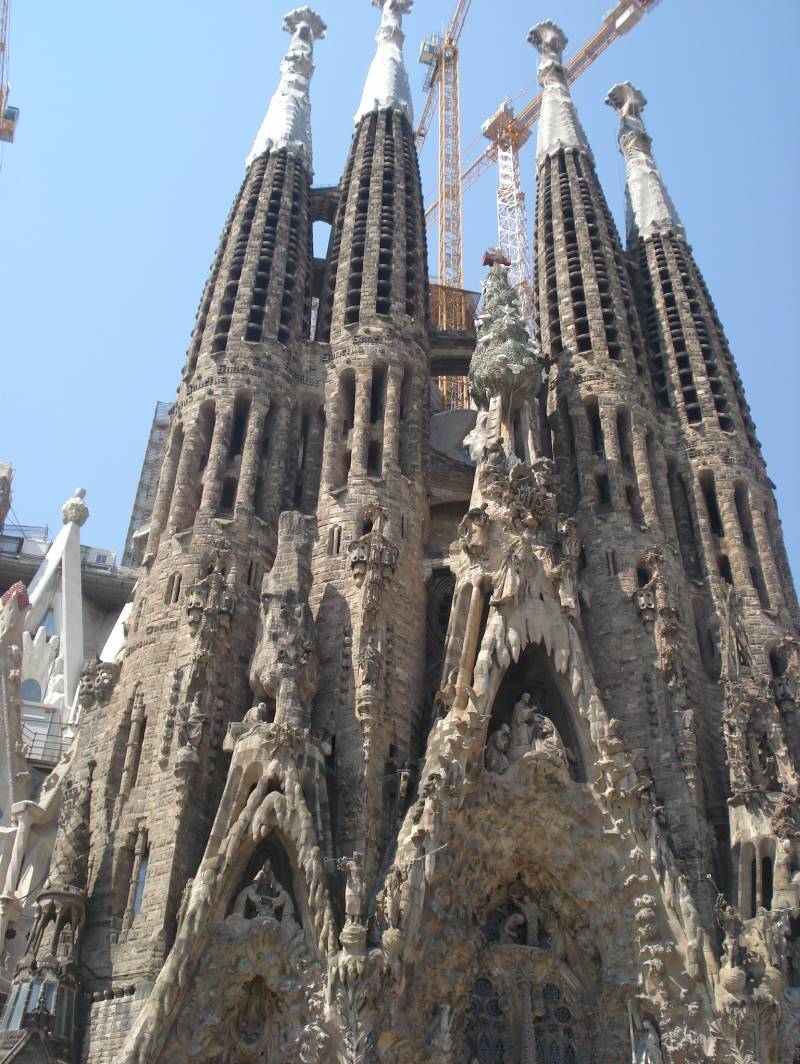 If someone saw how children make turrets of liquid sand on the beach, here their resemblance to the idea of ​​the architect is obvious.

Realizing that he could simply frighten the inhabitants of the city if he began to work according to his plan from the facade of the Passion of the Lord, where the crucifixion of Christ was to be depicted in detail, Gaudi decided to “prepare” them and in 1892 began with the work on the facade of Christmas. One of the features of the decor used by him was the design of the top of the towers and gutters of drainpipes with images of lizards and snails, which were then found in abundance in all the environs and ... were also God's creatures. Then in 1899, he completed the portal of the Holy Virgin of the Rosary, which also has a lot of symbolism. In 1911, Gaudi’s Passion Facade project was created, but its construction began after his death. 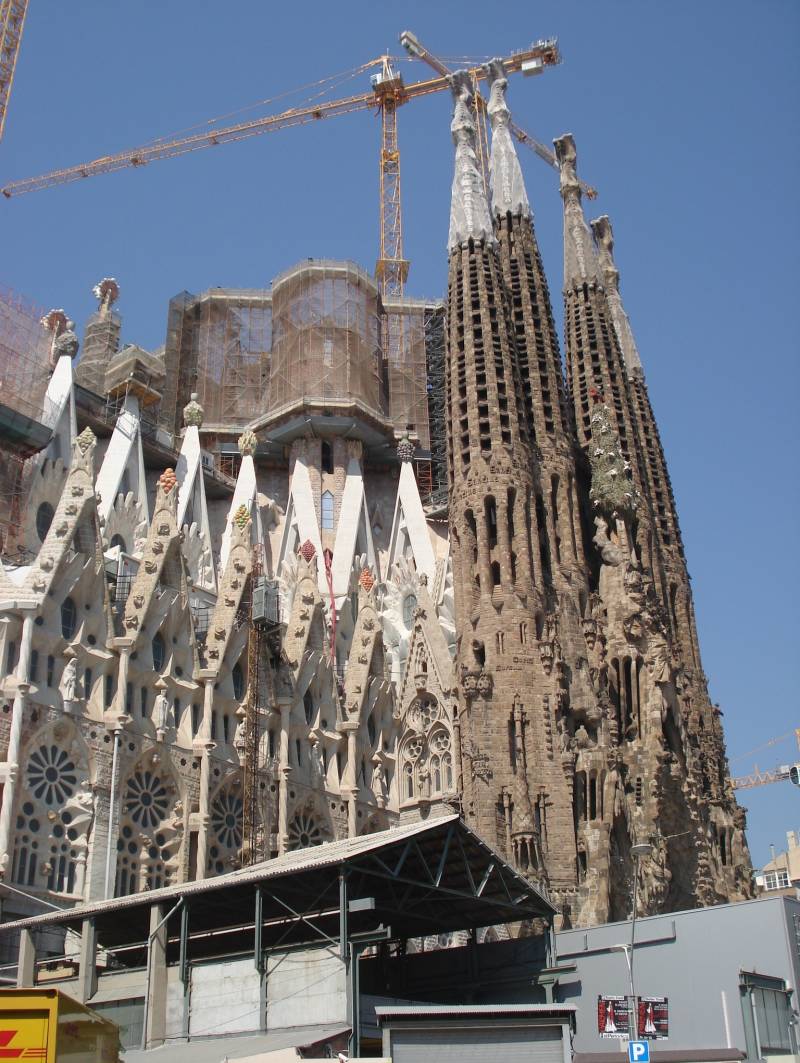 There are many different technical buildings around, so it’s difficult to photograph from all sides.

When Gaudi died, his closest associate Domenech Sugranes, who had worked with him for more than 20 years, continued building. He died in 1938 year, but managed to build three belltowns of the facade of Christmas (1927 — 1930), completed work on ceramic cypress on the front entrance of the facade, and did a lot of things that Gaudi did not have time to do. The Spanish Civil War led to the fact that the construction of the facade of Christmas was possible to continue only in 1952 year. 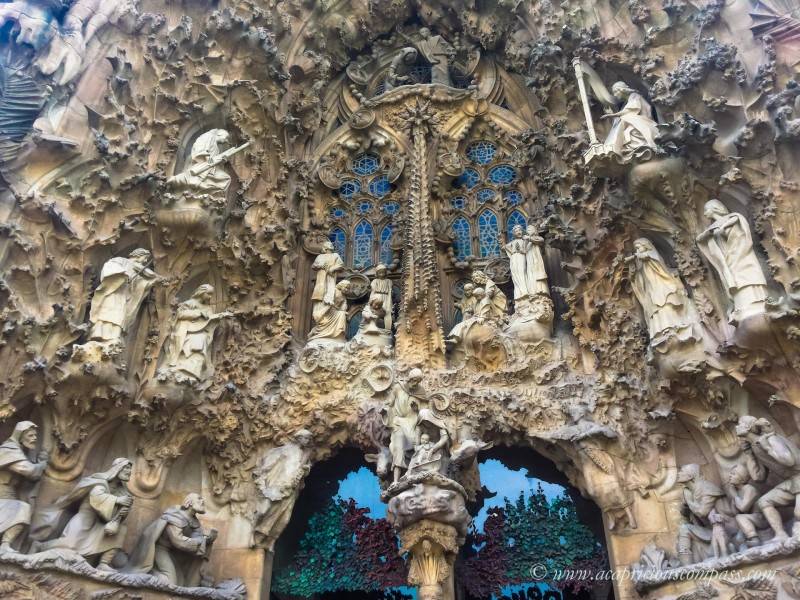 The walls of the temple and its facades are decorated with an impressive number of different sculptures.

In 1954, the year finally began to build the facade of the Passion on the basis of Gaudi's designs made by him from 1892 to 1917 year. In 1977, four towers of the facade of the Passion were completed, and in 1986, work began on sculptures for its decoration, which were finished at the beginning of the 21st century. At the same time in the windows were mounted stained glass windows dedicated to the Resurrection of Jesus Christ, and a bronze sculpture of the Ascension of the Lord was cast. 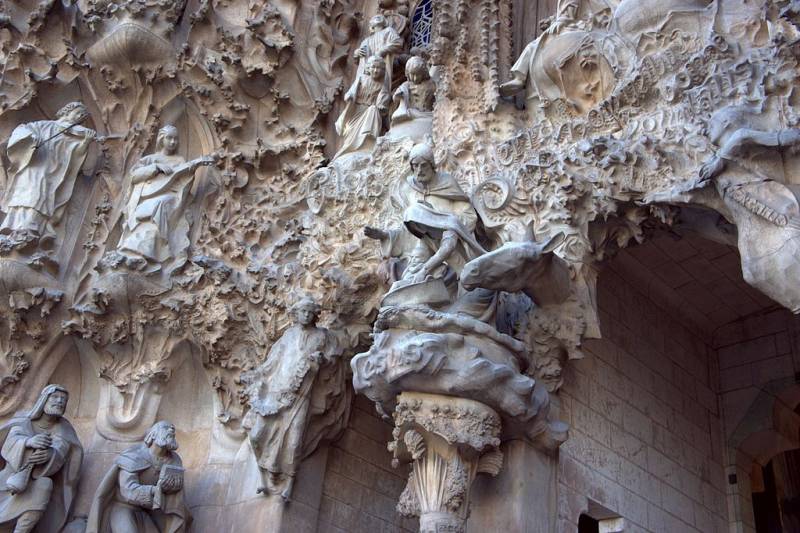 "Flight into Egypt." Immortalized even a donkey!

Today, the temple is working on the 170-meter central tower, topped with a cross, and the tower of the apse, dedicated to St. Virgin Mary. According to the existing plan, there should be four more towers in this part of the building, named after the Evangelists. All construction work must be completed in 2026 year, including the facade of Glory, begun in 2000 year. 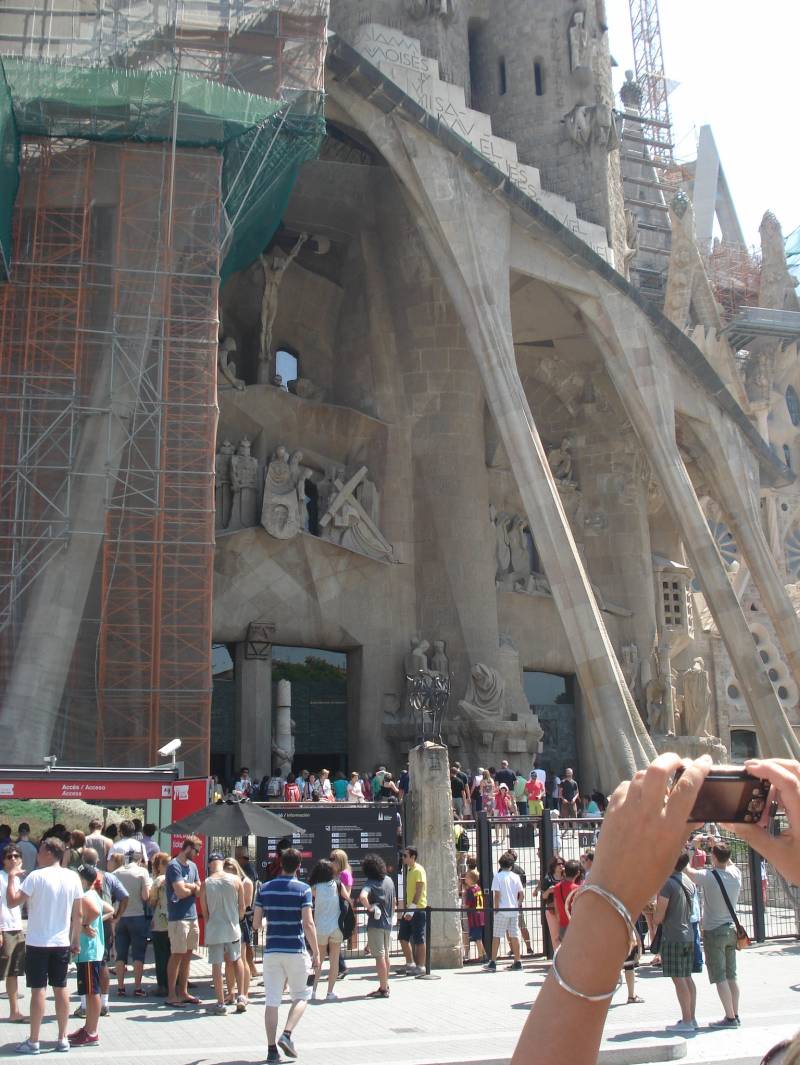 "Facade of the Passion"

A fully prepared church will have eighteen towers. The twelve, that is, four on each of the facades, will be from 98 to 112 meters in height, and are dedicated to the twelve apostles. Accordingly, four more towers in 120 meters high, named after the Evangelists, will surround the main 170-meter tower of Jesus Christ, and the bell tower of the Virgin Mary will be located above the apse. The towers of the Evangelicals should be decorated with their sculptures and traditional symbols: Taurus (Luke), Angel (Matthew), Eagle (John) and Lion (Mark). On the central spire of the tower of Jesus Christ will be a huge cross. The total height of the Temple, according to Gaudi, also in no way could be accidental: it should not have been higher than the natural creation of the Lord, Montjuic, by its height. The remaining towers will have ornaments in the form of sheaves of wheat and bunches of grapes, which should symbolize Holy Communion. 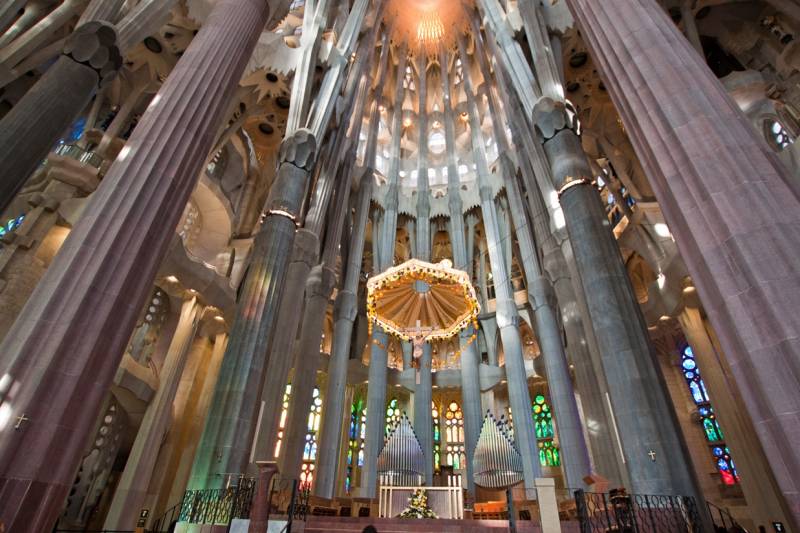 This is how the temple looks inside!

The façade of Christmas, most of which was created during Gaudi’s lifetime, is formed by three portals glorifying the Christian virtues. All portals are decorated with sculptures made in a very realistic manner and dedicated to the earthly life of Jesus Christ. For example, over the left portal of Hope are shown, for example, scenes of the betrothal of Mary with Joseph, their flight to Egypt and the horrors of beating babies, while his tops with the inscription “Save us” symbolize Mount Montserrat. The right portal of the Faith is adorned with the sculptures “The Meeting of Elizabeth and the Mother of God”, “Jesus and the Pharisees”, “The Entry into the Temple” and “Jesus in the Master Carpenter”. Accordingly, the central portal under the Christmas star is decorated with sculptural compositions “The Birth of Jesus” and “The Adoration of the Shepherds and the Magi”, as well as scenes of the Annunciation and the Wedding of the Holy Virgin, over which the trumpet figures of angels “soar”. 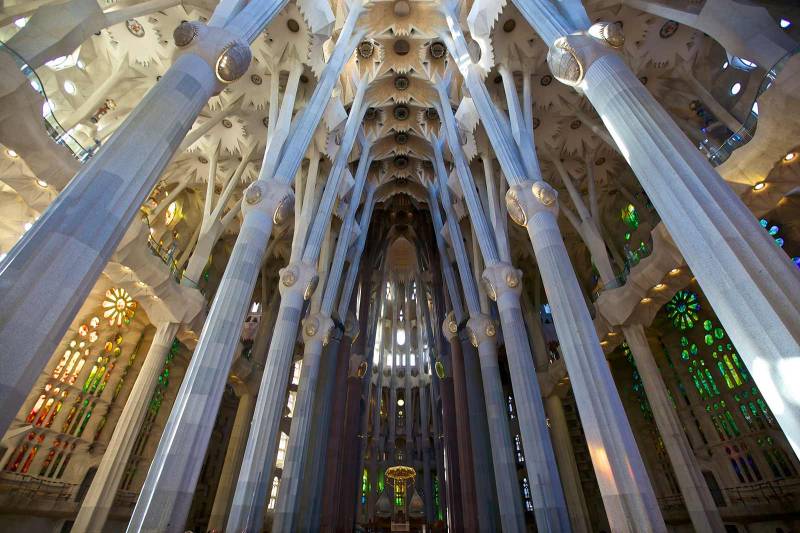 And this is his columns and vault.

The shape of the tower-bell towers, similar to sand castles, was not chosen by chance. It determines the device passing inside the spiral staircases. At the very top of them, Gaudi wanted to install tubular bells, the sound of which should be combined with the sounds of as many as five organs and the voices of one and a half thousand choristers. On each of the bell towers from top to bottom is the following motto: "Glory to the Almighty." And above it polychrome spiers towering, with decorations in the form of symbols of the episcopal dignity - the Ring, Mithra, the Rod and the Cross. 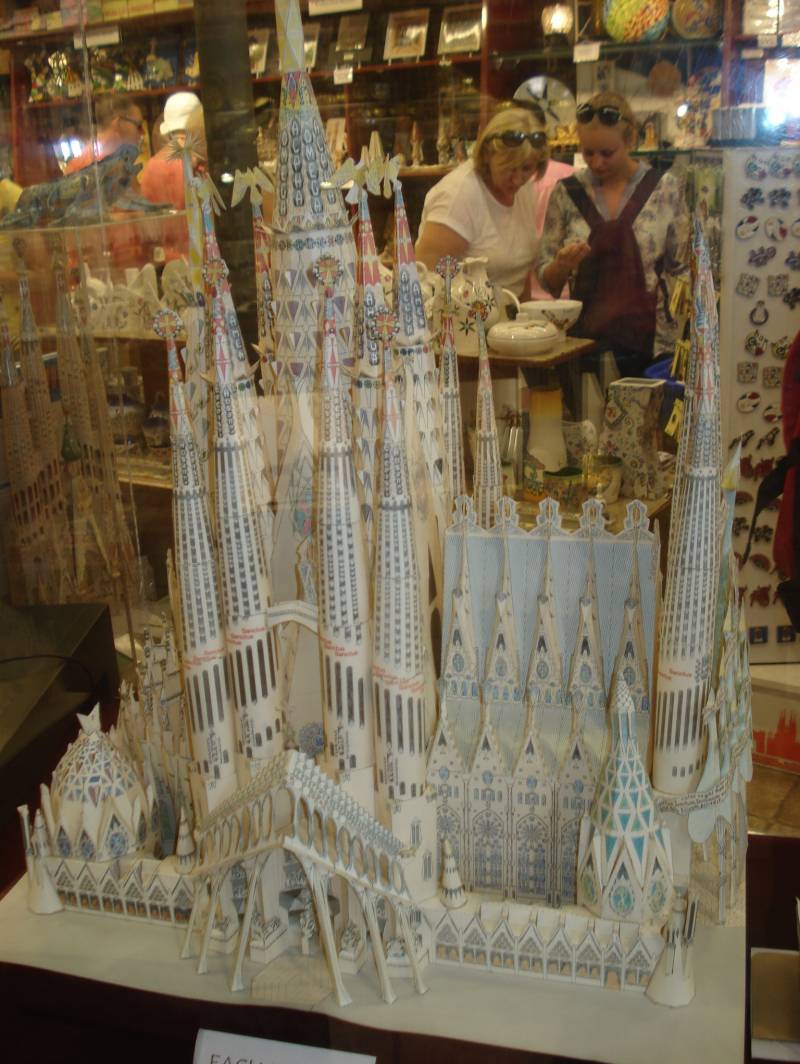 Near the temple, which store you will not enter, there are everywhere its layouts in finished form. Where from paper ...

Inside the temple, all the interiors of Gaudi subject to strict geometric laws. There are round and elliptical-shaped windows and stained-glass windows, arches of hyperbolic outlines, helicoidal staircases, and also numerous stellar structures that appear at the intersection of various surfaces, and ellipsoids that adorn the supporting columns — this is an incomplete list of the geometric details of this unusual temple. 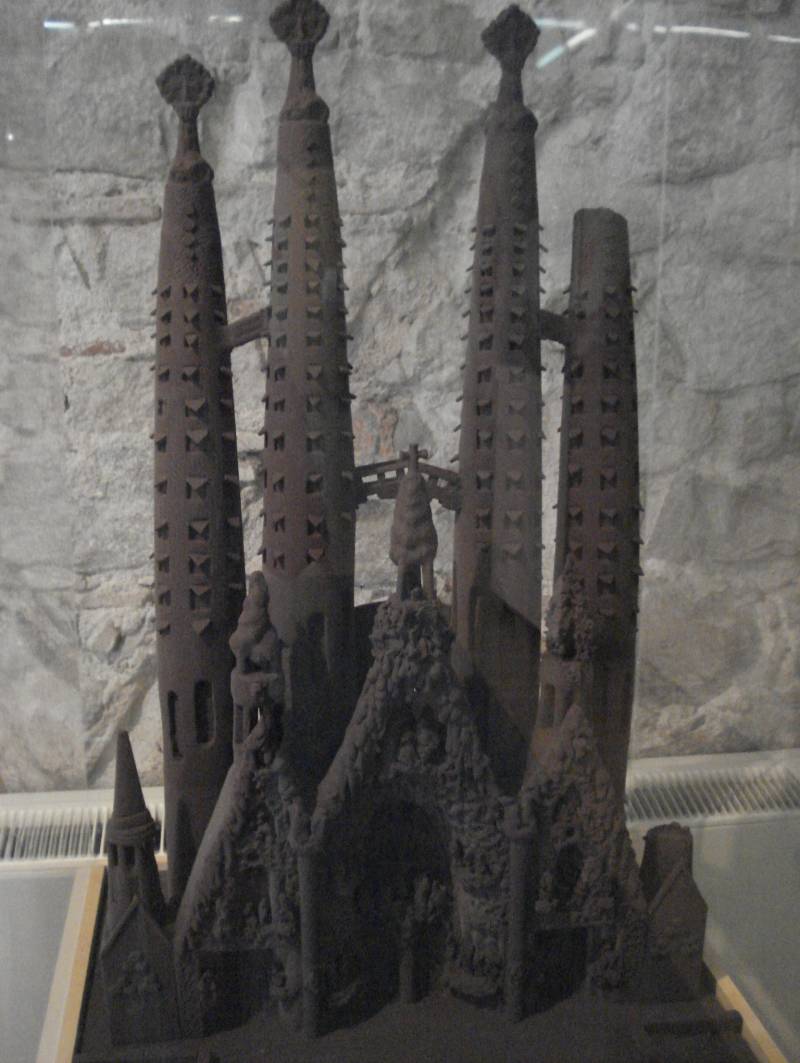 But in the Barcelona Chocolate Museum it is made of chocolate!

The main weight of the towers and vaults is supported by columns, which transfer their enormous weight to the foundation. In the cross section of the base columns have a star shape with the number of vertices from 4 to 12, which is associated with the load on each such column. As it approaches the arches, it forks and creates an unusual structure in the form of ... stems, which was dictated by the need to support the relevant parts of the arch as efficiently as possible. 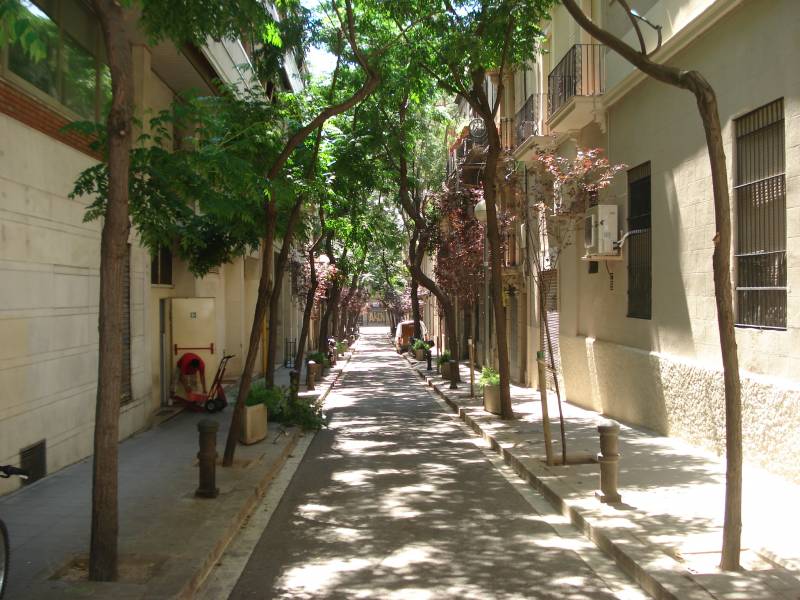 Around full of tourists. Nowhere to spit! But literally a step to the side, and you can find yourself on such a completely quiet and shady street.

Author:
V.Shpakovsky
Articles from this series:
Montserrat. Monastery on the split mountain