April 27 2018
56
The development of the military-strategic situation in the Hindustan subcontinent favors a significant strengthening of Russia's geopolitical positions. 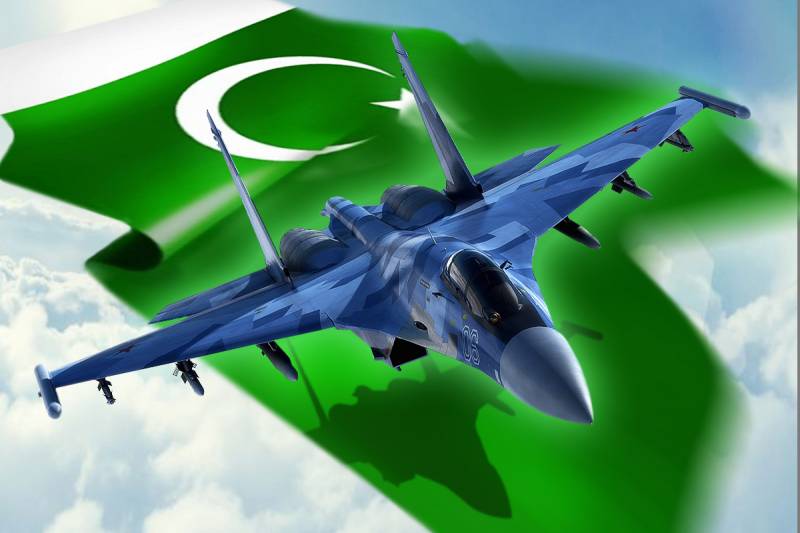 Reports that Pakistan has finalized a contract for the purchase of a large party in Russia, namely 54 modern Su-35 fighters, and are also ready to consider buying large quantities of other types of Russian military equipment, is currently quoted at the level of unverified rumors.

However, it is impossible not to draw attention to the literal coincidence in time of this “rumor” with news on the refusal of the neighboring country of Pakistan, India, from the joint development with Russia of the Indian fighter of the fifth generation. And the logic of this coincidence is so obvious that, even if the Pakistani contract were just a rumor, it should be filled with real content as quickly as possible. And in the mutual interests of both parties.

Pakistan for many decades was the “third superfluous” in Russian (and even in Soviet) politics in the Indian subcontinent. Because Moscow has always favored Delhi and in every way took into account the whims of the Hindus in terms of its restraint in relations with Islamabad.

By the way, one of the consequences of such a policy of the USSR was the Afghan war, in which Pakistan, which was not bound by any obligations to the Russians, became the main US military base for overthrowing the pro-Soviet authorities of the DRA.

Pakistan itself, meanwhile, has found another regional support for itself - China, with which it is at the very least a couple and opposes India.

And today, the geopolitical configuration of South Asia, it seems, may again change beyond recognition. The reason for this is China’s powerful move towards world leadership and the convulsive US attempts to stop it. For what Washington, who has lost its former power, is trying to mobilize all the reserves at hand. Including India.

The Americans are clearly betting on the irresistible antagonism of the two and a half billion Asian powers, and intend to use India as a powerful additional factor of pressure on the PRC. Calculation on Pakistan in this sense is absolutely unreal, since this country has a complete coincidence of long-term geopolitical interests with Beijing. China and Pakistan regard India as their main regional strategic adversary and will never clash with each other for the sake of third party interests.

Therefore, there is no alternative for Washington - only a bet on India. This has become the soil for the US military-technical cooperation with the Indians that has received a powerful impetus in recent years. Those, in turn, also treated American “courtship” with great interests. Since they are well aware that such cooperation can be very promising and long-term precisely because of the coincidence of the two countries' strategic approaches to the problem of China.

That cannot be said about Russia, which is completely unprepared and will never be ready to take the path of the anti-Chinese agreement with New Delhi as far as Washington can and can afford.

It is for this reason that Russian-Indian military-technical cooperation has recently begun to sink. Hindus are increasingly turning the gates to Russian proposals in this area, without going into an explanation of the reasons, or getting rid of, to put it mildly, not completely justified claims. Of course, a large country, firmly tied to military cooperation, first with the USSR and then with the Russian Federation, cannot at one moment turn to 180 degrees. However, the negative trend is evident, and Moscow cannot ignore such a development of events.

Of course, the loss of a very capacious Indian arms market is not at all what is in the interests of the Russian Federation. However, "consent is a product with complete non-resistance of the parties." And if one of the partners cools off to such cooperation, then this, one way or another, will have to be considered.

On the one hand, Russia will undoubtedly do everything possible to retain as much of the Indian military pie as possible. What, in particular, will be largely contributed by the policy of the USA itself. They no longer enjoy the reputation of a reliable military-political partner in the world. What the Indians are undoubtedly well aware of. Of course, they well understand their purely official role in the American anti-Chinese game. But, nevertheless, they will certainly strive to use the opportunities opened up due to this game to their advantage.

However, the American military industrialists care about Indian profit to a very small extent. They are much closer to their own. And for New Delhi it will become a big problem. American weapon any variety and destination is always the most expensive in the world. And India, although a large country, is far from being the richest. Hindus will be very, very difficult to switch to the US military "exclusives". They still have the ancient Soviet-made MiG-21 that makes up almost half of the air force fleet. They would be happy to transfer to the new overseas "stealth", but only that they clearly can not afford.

By the way, it is for this reason (financial weakness) that the recently announced withdrawal of the fifth generation Indian fighter from the joint program with the Russian Federation should not be regarded as a kind of trough in front of America. According to experts, they simply did not have enough money even for a relatively modest version of Russia. They will definitely not go to the financially ruinous replacement of the Su-57 on the F-35. And, by the way, the same India, having moderated its appetites for some of the planes of the future, at the same time, it is reported, became very interested again in Russian Su-35!

All this to the fact that the possibility of the military industry of the Russian Federation to continue to be present in the Indian arms market does not at all tend to zero. And they can even have a very bright future.

Nevertheless, the Pakistan version is very interesting for Moscow. First of all, this is quite a relevant preventive reminder to the Hindus that the world has never come together with a wedge. Secondly, how much can Russia stand in South Asia on one leg, although it may well find a place there for the other? And this is not to mention the fact that Moscow’s unconditional strategic choice in favor of China fits in well with relations with Pakistan’s most important Chinese ally. That, in turn, can give impetus to further geopolitical changes favorable for the Russian Federation in South and Central Asia. And, in particular, in a very problematic Afghan area, which is sensitive to the security of Russia's southern “underbelly”.

Needless to say, in big politics, everything is far from clear. And the same Pakistan has historically close ties not only with China, but also with the United States and in general with the Anglo-Saxons. However, these ties have already been degrading for many years, and in the event of a further rapprochement between Washington and India, on the basis of the drawing of anti-Chinese combinations, they may even fade away.

So the geopolitical situation in this key and most densely populated region of the planet for the Russian Federation as a whole is very promising. And a hypothetical contract for the delivery of the largest batch of Russian military equipment to Pakistan could be a long overdue step in a very right direction.

Ctrl Enter
Noticed oshЫbku Highlight text and press. Ctrl + Enter
We are
Situational analysis of the death of the MH17 flight (Malaysian Boeing 777), made on the basis of engineering analysis from 15.08.2014Results of the week. "God forbid to see Russian revolt, senseless and merciless!"
Military Reviewin Yandex News
Military Reviewin Google News
56 comments
Information
Dear reader, to leave comments on the publication, you must sign in.