April 28 2018
194
When just a few days ago in an article about events in ArmeniaI told about the US desire to clear the Transcaucasian corridor to Central Asia. It was difficult to imagine how coordinated the Americans would be in this key geopolitical direction. But the reality turned out to be more serious than the boldest expectations: the struggle in Armenia is still ongoing, and Washington has already agreed to establish military bases in the Caspian Sea, in Kazakhstan. 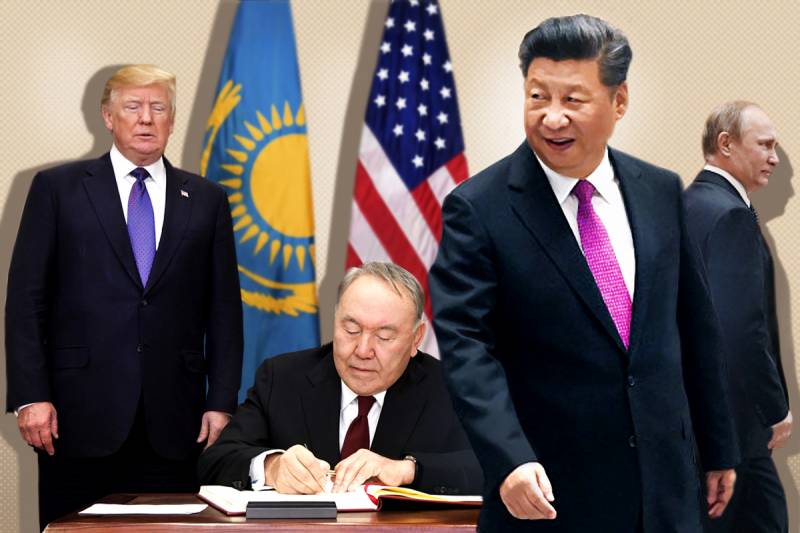 People far from geopolitics, did not attach much importance news from Kazakhstan, whose Senate ratified the agreement with the Americans on the use of Kazakh ports to ensure the transit of US military cargo to Afghanistan. And at first glance, this is really not such an important event: well, let them supply, think! At one time we allowed them to open a logistics center in Ulyanovsk: why, Kazakhs are worse? And if we tolerated NATO in our country, then in Kazakhstan we will even more tolerate!

They also recall the airbase in Kyrgyzstan - they opened, but we did not object, and nothing seemed to be alive until now. And is it worth sounding the alarm because the two Kazakh ports in the northern Caspian Sea, Aktau and Kuryk, will become US transit bases?

Yes, it is expected that the US military will appear there. And for the handling of goods, and for the protection of personnel, and in general, just in case. It is clear that for the protection of “caravans” from Baku they will slowly create a small flotilla. But this is the Caspian, say skeptics. This is the inland sea, and the aircraft carrier can not be driven there! And this is true - there will be no aircraft carriers there. But the Americans will be able to quickly arrange the assembly of relatively small vessels with their own anti-ship and anti-aircraft weapons in Baku - in general, this is by no means the most difficult task.

And instead of an aircraft carrier they will build a base in Aktau - the contract has already been signed, although we do not yet have clear information about the configuration of the object. Therefore, we take the conditional arithmetic mean — a small airfield, a powerful ground-based air defense system, and a pair of F-35B squadrons of the US Marine Corps stationed there “purely for formal reasons”.

Of course, such an option, even without aircraft carriers, transforms our undivided military domination in the Caspian Sea into a very conditional "numerical advantage." Because, for example, we also do not have aircraft carriers in the Caspian Sea, and there are no large surface ships of other types either. And will we be able in the near future to oppose F-35, the question is still a discovery, and adherents of "unparalleled in the world" will forgive me.

But this is, in general, nonsense. Well, you will think, Kazakhstan will quickly leave our orbit ... Behind him, seeing such a thing, Uzbeks, Turkmen and Kirghiz will line up for American cookies. Just think, the supply of our base in Tajikistan will become problematic ... As well as, in which case, logistics in the Russian-Iranian direction.

The Russian-Kazakh border, thousands of kilometers long and almost “naked” from the point of view of air defense, is no longer nonsense. Especially as Transsib stretches along this border for as many thousands of kilometers. And this, excuse me, is the state-forming railway, on which our entire economic sovereignty and territorial integrity rests.

Accessible to the enemy aviation, if anything, traditionally rear cities will become: Yekaterinburg, Novosibirsk, Kemerovo. The very “deep rear”, the presence of which saved us in the Great Patriotic War.

I want to emphasize one point. The political invasion of the Americans into Ukraine was extremely painful for us primarily from the spiritual and cultural points of view. The military geopolitical component also took place, and very seriously, but by snatching the Crimea from the American mouth, we somehow managed to stop negative geopolitical consequences.

The loss of Kazakhstan will definitely become a real military catastrophe for us. More precisely, not yet military (we can lose it without a single shot), but already somewhere very close to that. This will be a complete military castration of the Russian Federation, after which we will only have to “drop the king” and wait for the next “geopolitical party”. China has been waiting for a second chance for hundreds of years.

And it’s not at all necessary that we even wait for it at least sometime ...

Probably, the last stage of the encirclement of Russia from the famous “Anaconda” plan began. The last ring, which should finally stifle our ambitions and secure the Russian Federation in the role of a disenfranchised energy supplier for the “golden billion”, and then into the American pawn in the game of the Anglo-Saxons against China.

Clearly, the author again "nightmare" the reader, since the implementation of such a scenario would take at best five years. And in five years, so much more can happen that it is scary to think.

But you still need to think. At least over why Americans need a more complex and costly logistics route, when existing ones manage to supply the American group in Afghanistan quite well. And why should they "ensure the safety" of the new route. More precisely, from whom? There, besides the Russian Federation and Iran, there are no other claimants for American goods. And if they can try to stop this flow, it is precisely because it can be directed against their interests.

In fact, a long-awaited, but no less dangerous, challenge has been thrown to us. And much will depend on whether we can accept it and respond adequately. And above all, Russia's military consistency in the coming decades.

We have not so many answers. They can be divided into two types - active and passive.

An active response is an attempt to prevent the growth of American influence and military presence in Central Asia. And while it is quite difficult to say how this can be achieved without using military force. Definitely winning options are not yet visible.

An extreme variant of an active response is the division of Kazakhstan and the return of its northern regions to the Russian Federation in order to push the American military component as far as possible from the current Russian borders and the industrial centers of the Urals and Siberia. This option is very “hot”, and it is unlikely that it will be possible even with the current degree of international relations.

The passive response lies in the regular program of rearmament of the army, the strengthening of air defense in the southern direction, the creation in the Central Asian direction of a powerful military group capable of both repelling the blow of a potential enemy and defeating him in the adjacent territory.

This option looks quite utopian, both because of lack of time and because of the huge funds that we will have to invest in it. Although in the long term we still have to strengthen this direction, and here's why.

The Central Asian region is geopolitically very important for China. And it is possible that in a certain scenario, we will have to divide Central Asia into zones of influence precisely with the PRC. So, the zone of direct contact with our mighty southern neighbor will increase, and this will require us, as if it is softer ...
That's right - do not provoke China with its own weakness.

However, the passive answer option looks very dubious. So, if the Russian leadership adequately assesses the situation, by the fall we can expect a new round of tension in the Russia-NATO relationship.

And this time it is very likely that the initiative will come from Moscow already ...

Ctrl Enter
Noticed oshЫbku Highlight text and press. Ctrl + Enter
We are
Strangulation: the context, conduct and consequences of the American naval blockade of ChinaKazakhstan today: what is happening in the underbelly of Russia?
Military Reviewin Yandex News
Military Reviewin Google News
194 comments
Information
Dear reader, to leave comments on the publication, you must sign in.