How our liberals "bomb Voronezh"

April 27 2018
126
Our chief tele-liberal Boris Nadezhdin on the air of “60 minutes” said that Russia “needs to crawl away” from Syria, from the Donbass, and even said where to crawl away: to Moscow. Here, near Moscow, our liberals will say so directly: it is impossible to crawl further. 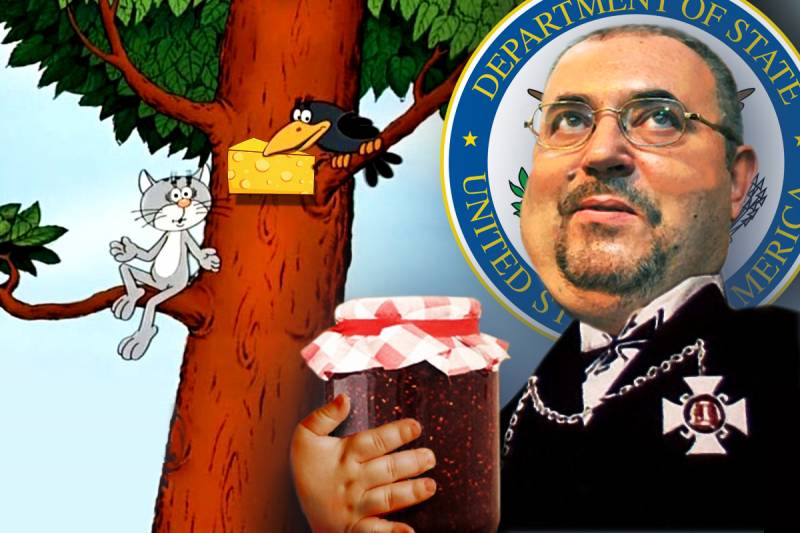 The old liberal song about the main thing from Boris Nadezhdin again sounded: nobody needs us in the West, no one thinks to capture us. Indeed, what does the West want from Russia? Syria and the Crimea with the Donbas, from where we are advised to "crawl away" Nadezhdins? Not only, these are signs of submission. The US State Department for a long time, since 2014, has not been tired of repeating that it is seeking a change in Russian policy, translated into Russian, of complete submission.

As proof of this subordination, Russia needs not to defend its state interests, but to immediately hand them over, and now give Syria, Crimea and Donbass as symbols of subordination on a platter, but the United States will not stop there. Full obedience is the destruction of the potential of Russia, that is, the dismemberment of Russia, so that it ceases to exist as a fact. Unpleasant for the West for centuries a fact that has been the subject of world politics.

Actually, this is the stone of our stumbling block with the United States and the West, Putin said about this even in 2014 year: they will not leave Russia alone even in their taiga until they get the Russian bear's skin. This is written in black and white in the US national security doctrine: no country should be comparable to the United States in terms of potential, and Russia is completely comparable. And today, and China.

At the same time, the State Department of the United States verbally shows touching Russian people, like their Indians in America, who were left with not only feathers on their heads, but also reservations, and Russians would generously leave Kosvorotki and matryoshka generously, as great Ukrainians are not forbidden to be proud of embroidery.

Recently, a forum of “Free Russia” was held in Vilnius: “How to resist Kremlin propaganda.” All gosdepovskie theses were voiced openly, without hesitation and diplomatic misunderstandings. Arkady Babchenko preached the complete disintegration of Russia, and without fail into “hostile principalities”. Dmitry Nekrasov lamented that there was nowhere to take at least 30.000 Dutch to run Free Russia, so many traitors could not be found in Russia. Other propagandists of the State Department pondered where to draw the new frontier of Russia: in the Urals or a bit beyond the Urals?

What was it in Vilnius? Changeers of regimes in the West are preparing us an occupational administration, proprietary collaborators, who are assuredly put the Vilnius seal on their brow. Therefore, they are paid, burned, despite the seemingly worthlessness. If they contain these traitors, then they are thinking of using them, then there are plans for the occupation of Russia by a totalitarian western machine pretending to be a fluffy "democracy."

However, Putin’s Russia does not want to break up into “democratic colonies” under the control of the US State Department, and in the Ukraine and Syria she weighed down Washington with several vocal slaps so that she wouldn’t get too close, would not cross the “red lines”. And the great sanctions war broke out between the West and Russia.

Our liberal attorneys of the West, like Boris Nadezhdin, are out of it about this: how can Russia take retaliatory sanctions against the West! Developed by the State Duma "Measures of influence on unfriendly actions" of the United States and its vassals cause our liberals hysterical: they categorically declare that our sanctions against the United States will certainly hit ordinary Russians, leave them without drugs, somewhere in the outback, in the conventional "Voronezh" . So I immediately recall Yegor Gaidar, as he hid behind pensioners in the 90s in an attempt to tear up Gazprom: it is impossible to pay pensions without privatizing Gazprom.

Between the United States and Russia, “there is only a military war,” our well-known political analyst Dmitry Trenin states in the program “The Right to Know!” There is a war with the West in all areas except the military, and how you can fight without spending your resources, without sacrificing on the altar of victory? Represent the order: to win the battle, but not to lose a single soldier? This insanity is preached to us today by our liberals.

Sanctions are a war without “war”, and war means deliberate lies and deception of the enemy, which we were openly appointed, and we all wonder that the Western world media broadcast a deliberate lie about Russia, ignore even eyewitnesses to the events? And buying drugs from an unfriendly country "for Voronezh" is not dangerous? Today, medications from the United States can be chalk or poison. Squeaks in England poisoned, by the way.

In fact, our liberal column is worried about something else: Russia during the war of sanctions is really breaking away from the West and moving to the East. The Russian economy is quite easy to withstand all sanctions, while increasing the release of the latest strategic weapons. This contradicts all the lamentations of pro-Western economists about Russia's incomparable economy of Russia, but this is a fact.

And this fact is explained quite simply: if we take the real production, then the Russian economy ranks third in the world, according to statistics: Russia ranks third in the world in electricity consumption. These facts are interrelated. But the US economy on 80% consists of financial and other services, a number of economists believe that the United States has become a global financial management office, and at the same time inflating its financial bubble of public debt.

The Russian economy is really “golden”: it is self-sufficient in the production of basic goods and raw materials, it can produce the latest weapons and spacecraft that you cannot buy anywhere in the world, and everything else, all engineering and other consumer goods, Russia can buy on the world market, at least in Europe, at least in China, at least in India. Today, Rusal by Oleg Deripaska is leaving under sanctions pressure on eastern markets, and this is the only thing that the West will achieve from it.

Another result of the sanctions war with the West is the fall of our Nadezhdins, who demonstrate complete indifference to the fate of Russia, who think only about one thing: how to crawl away to Western liberal teachers and benefactors. Like wise minnows, they live in accordance with the maxim of Saltykov-Shchedrin: “He lived - he trembled, he died, he trembled”. This is the latest ideology of Russian liberalism.

What do these "liberals" have to do with freedom, honor, duty? To the classical liberals of the past? Everything replaced their love for the well-fed little world, their willingness to do anything for the sake of parmesan for their stomachs.

Ctrl Enter
Noticed oshЫbku Highlight text and press. Ctrl + Enter
We are
A great interview with Sergey Lavrov: about Ukraine, Obama and IranWhat you didn't want to know about England
Military Reviewin Yandex News
Military Reviewin Google News
126 comments
Information
Dear reader, to leave comments on the publication, you must sign in.