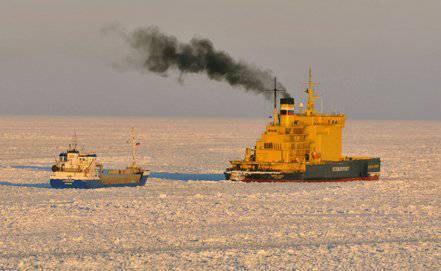 The Baltic Plant is ready to resume construction of new-generation nuclear icebreakers. In this regard, the shipyard will take part in a tender for the construction of a nuclear-powered icebreaker with a capacity of 60 MW, which Rosatom plans to conduct. This was announced today by the construction director of the company "Baltic Shipyard Shipyard" Andrei Buzinov.

United Shipbuilding Corporation (USC) and Baltiysky Zavod in December 2011 g signed an agreement to prepare for the construction of a series of nuclear icebreakers with an 60 MW capacity. Russia plans to build three nuclear double-icebreaker icebreakers by 2020, the first of which is supposed to be launched in 2016. Each ship is rated for 40 years of operation.

The Baltic plant built all Russian nuclear icebreakers, with the exception of the very first nuclear-powered icebreaker "Lenin", which was built in the middle of the 50-s of the last century at the Admiralty plant in Leningrad.

The Baltic factory was founded in 1856. The plant specializes in the construction of warships, large-capacity civilian ships for the transport of various cargoes and icebreakers / with nuclear and diesel power plants /. The plant carries out construction of cargo-passenger ships of the Ro-Ro and Ro-Pax type, tankers for the transportation of chemical cargoes, bulk carriers, and other types of ships and destinations.