The third and second serial. In St. Petersburg, the minesweeper "Ivan Antonov" was launched 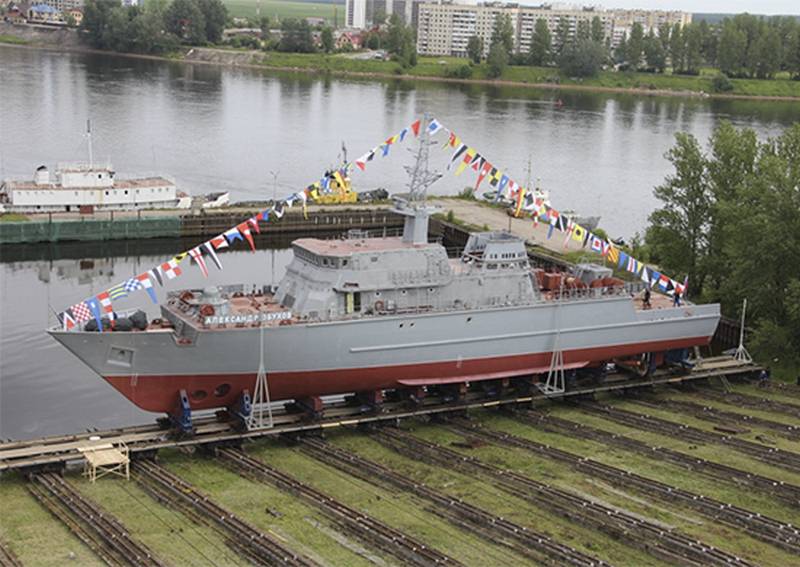 Today is a significant day, the launch of the ship "Ivan Antonov". The plant entered the second century with new technologies. Together we are modernizing the plant and getting new results ... Antonov was awarded the title of Hero of the USSR in 22, this is a good example for us how to work and love our Homeland
- said the general director of the plant Vladimir Seredokho.

It was noted earlier that the mine defense ships of the 12700 project will form the basis of the mine-sweeping forces of all fleets.

The minesweepers Alexandrite of the 12700 project are designed by the Almaz Central Metallurgical Bureau.

The marine base minesweeper "Ivan Antonov" is the third and second serial ship of this type. The contract for its construction was signed with the Ministry of Defense of the Russian Federation in April 2014. It was laid at the Sredne-Nevsky Shipyard on January 25, 2017. The ship is planned to be transferred the fleet this year.

The lead ship of the 12700 project, Alexander Obukhov, is already performing tasks as part of the Russian Navy, the following four ships (George Kurbatov, Ivan Antonov, Vladimir Emelyanov, and Jacob Balyaev) are at different stages of construction.

Ctrl Enter
Noticed oshЫbku Highlight text and press. Ctrl + Enter
We are
The fiberglass hull of the second minesweeper will be manufactured in the spring of 2015 of the year.
Military Reviewin Yandex News
Military Reviewin Google News
15 comments
Information
Dear reader, to leave comments on the publication, you must sign in.