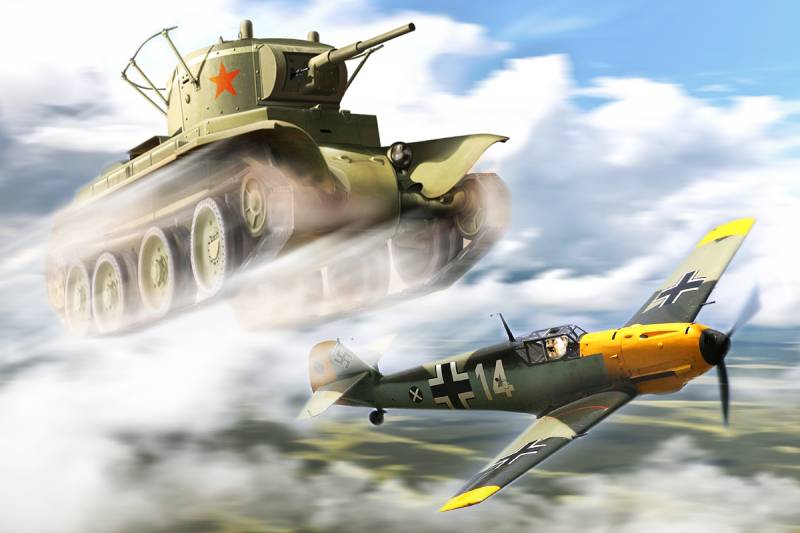 The main cause of damage is called economic problems. By the beginning of the war, the industry did not have time to turn the Wehrmacht into a well-equipped modern army.

Of the thousands of single Messerschmitts concentrated on the 21 evening on June 1941 near the Soviet borders, only half were the newest modification “F” (579 units). Despite the rush deployment of production lines, serial deliveries of Bf.109F could only be adjusted in early spring, just a few months before the attack on the USSR.

Even more depressing was the state of “Panzervaffe,” where the number of modern tanks (Pz.III and Pz.IV) was a quarter of the fleet of armored vehicles. For the attack on the USSR, 965 “triples” and 439 “fours” were allocated.

Of course, in 1941, the state of the armed forces was much better than at the very beginning of the war. In September, the 1939 of the year when there was an attack on Poland, there were only 211 “fours” and 98 “triples” of the first, still imperfect modifications (and also 20-25 command vehicles based on Pz.III).

In the prewar years, the German leadership gave the impression of madmen. For all the grandeur of designs with an eye on world domination, as of January 1938, the “Panzervaffe” armed forces had a “steel fist” consisting of 12 Pz.III tanks and three more menacing Pz.IV.

Could Guderian’s “steel wedges” at that time interfere with the advancing Red Army?

As of the beginning of the 1938, the Red Army was armed with over-BTN-2000 7 tanks with powerful (for that era) cannon armament and high mobility. The value of the combat mass (14 tons) and the security of these combat vehicles approximately corresponded to the Pz.III and Pz.IV of the first modifications. At the same time, the BT-7 has been massively exploited in the army for three years and was well known to the personnel.

The numbers do not give reason for doubt. In total for 18 months before the beginning of World War II, the main enemy was a militarily insignificant state. Based on the 100-multiple ratio of forces, our invincible and legendary could break the Wehrmacht, like a crystal vase. There was no reason to be afraid of Hitler, to pursue a “policy of appeasement” and conclude any covenants with him.

The official historiography describes the heroic successes of diplomacy, which managed to “push the frontier” to the West and provide time to begin re-equipping the army. Just forgot to add - the German army.

Our Red Army received all the necessary equipment by the middle of the 1930's.

Now experts will certainly enter the discussion, explaining that the above estimates are incorrect. A comprehensive analysis of the armed forces is needed. During this period, the Red Army had a 100 -fold superiority only in medium tanks. For other types of military equipment, 10-ti was observed, or even scary to imagine, 5-multiple superiority.

Experts will remind you that there were many other types of armored vehicles in service with the Panzervaffe. The German “two” (Pz.II) with an automatic 20-mm gun was formidable weapons, a real infantry fighter. However, in the conditions of complete absence of “real” tanks, combining firepower, mobility and security at the level of the Soviet BT-7 or T-28, the presence of these tankettes could no longer be meaningful. 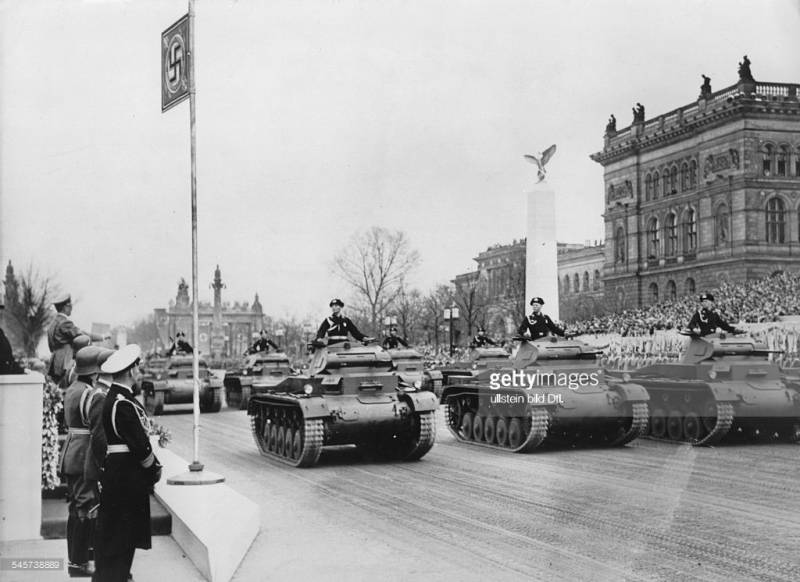 Why is the armored trash that looks like children's toys in the parade in honor of the Fuhrer's 50 anniversary of the streets of Berlin? Because the Germans have nothing better

If you continue in the same vein, along with the primitive “units” and “deuces” it is worth considering in the calculations and 6000 light tanks T-26 and military equipment on their chassis, transferred to the Red Army in 1932-1937.

All the facts and figures say the obvious: in the prewar period, the Red Army could overturn the Wehrmacht in one blow, as planned: “with a little blood, on foreign territory”. 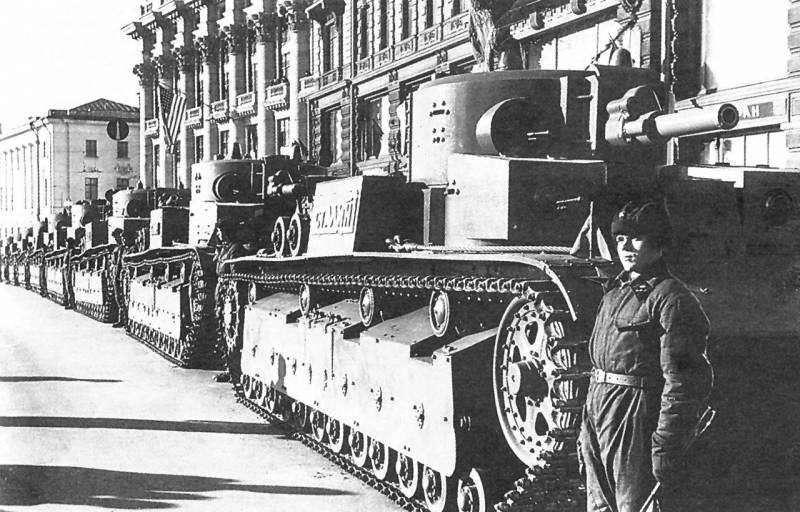 T-28 on the streets of Moscow, 1938 year. Powerful "breakthrough tanks". Anyone who doubts the combat capabilities of the T-28 should urgently become familiar with the feat of Sergeant Dmitry Malko.

The absolute catastrophic weakness of the German armed forces was noticeable in all.

As of the beginning of 1938, the main Luftwaffe fighters remained He.51 and Ar.64 — primitive biplanes armed with a pair of rifle caliber machine guns even by the standards of that time. The combat value of these flying coffins was demonstrated by the actions of the Condor Legion. In exchange for outdated aircraft, Messerschmitts were urgently sent to Spain, which could offer at least some resistance to Soviet fighters.

As of 1 in August, 1938 had a 643 fighter in the first line of the Luftwaffe, of which about half were Bf.109. The Germans did not waste time using the “grace” provided to them every day to prepare for war. Rearmament went at full speed. The production of the “Messerschmitt” was connected to the plant “Arado” in Warnemünde, the enterprises “Earl”, “Fizeler” and “Focke-Wulf”. As a result, on 19 September 1938, the Air Force already included 583 fighter Bf.109 of all types.

However, it was not too late. All built "Messerschmitts" belonged to the primitive modifications of A, B, C and D. Equipped with low-power engines, the vast majority - with machine-gun armament. Corresponding to the aggregate TTX Soviet I-16 "type 5", which at that time was built over 2000 units.

The first “mature” Bf.109E modification with Daimler-Benz “six hundredth series” engine insensitive to overloads with direct fuel injection, which developed more power with 40%, was still at the flight test stage with gun armament.

Another fantastic example. When attacking Poland, the Luftwaffe had only 12 Ju.88 high-speed bombers. For comparison: by the fall of 1939, front-line bomber aviation The Red Army Air Force managed to get over 4000 SB bombers from industry.

By June 1941, the ratio changed markedly. And not in our favor.

2 / 3 German squadrons already had a new type of bombers in service. 88 th Junkers - a unique in its class aircraft, best fit into the structure of the armed forces. In 1941, he had no analogues in the number of bombs used and the variety of combinations of bomb weapons.

In total, 523 “Junkers” was allocated for an attack on the USSR, while most of the aircraft belonged to the Ju.88A-4 and Ju.88A-5 modifications, much more sophisticated than those used in the 1939-40 military operations.

There is nothing more interesting than to refute established myths. Such simple and obvious mistakes made by smart people. When will they once again talk about “unfinished plans” and about the lack of time to prepare for war, ask historians a simple question: gentlemen, do you have a smaller field of view than an ant?

In your calculations, you give a "head start" to one side, but do not notice that the pace of development of the German military industry exceeded the domestic ones. In such conditions time worked on the enemy.

By the beginning of the war, the industry did not have time to turn the Wehrmacht into a well-equipped modern army. By the 1941 year, the Germans managed to catch up (and in some cases beat) the Soviet military industry only in terms of the quality of the equipment produced. If the truce continued for another couple of years, it would have surpassed the number.

The most advantageous power ratio was observed in 1937-1938. The Red Army had absolute quantitative and qualitative superiority in all categories. And then this superiority was gradually lost.

The development of the USSR military industry, as well as the appearance of “new types” of tanks and aircraft, did not change anything in this scenario. The German MIC evolved faster. Just like us, the Germans regularly created new models of military equipment.

Let me quote a small excerpt:

"... a few years before the advent of the T-34 to the factories of the company Henschel and Son, AG, the development of heavier vehicles began, and in 1937, this company received an order to build an 30-ton breakthrough tank that would have more powerful weapons and 50 mm armor. By 1941, the chassis of the new model was created and tested ... Next came VK 3001 (30 tons), VK3601 (36 tons) and VK 4501 (45 tons) models. The latest model especially liked Hitler, so as early as April 1942, to his birthday, the Führer received a modified and improved version of the new tank as a gift. ”

This is “Tiger”, gentlemen.

Suppose the war began a year later. And what would be the result of a successful “rearmament of the army”? If by the spring of 1942, the Germans had created a tank that did not promise anything good for Soviet military equipment of the “new types”, all that remained was to add the T-34 and KV to the list of “obsolete equipment” and begin an urgent re-equipment of the army to other, more advanced tanks.

The above reasoning is very vulnerable to criticism. There will always be those who find the complex simple and the simple difficult. After all, one can enumerate the details for a long time, making amendments on the “human factor”, comparing the combat experience and the strategic art of the generals.

But it could be easier. We are talking about the pre-war period, and we know the input parameters that leave little doubt.

What significance could the commander's abilities of Goth and Guderian have when they had three modern tanks for two?

Fascist reptile should be pressed into the bud. The question remains: why, instead of crushing blows with tank wedges, did you flirt with the Germans on the pretext of not being ready (who? Or us?) For war?

Used materials from sites:
http://ww2history.ru
http://www.airwar.ru
http://arsenal-info.ru
and the article of D. Khazanov “Eighty-eighth” against the USSR ”.

Ctrl Enter
Noticed oshЫbku Highlight text and press. Ctrl + Enter
We are
What you didn't want to know about EnglandList of destroyed the largest and most high-tech enterprises
Military Reviewin Yandex News
Military Reviewin Google News
196 comments
Information
Dear reader, to leave comments on the publication, you must sign in.