Retribution from the depths. The death of the German transport "Goya"

April 26 2018
29
When they talk about the largest maritime disasters, everyone immediately remembers the famous "Titanic". The crash of this passenger liner opened the 20th century, taking the lives of 1496 passengers and crew members. However, the largest sea catastrophes occurred during the Second World War and were associated with military operations at sea.


So November 7, 1941 German aviation off the coast of Crimea, the Soviet ship Armenia was sunk. According to various estimates, from 5 to 10 thousand people (according to modern data) died as a result of this disaster. Only 8 managed to escape, the ship sank almost instantly in just four minutes. Almost four years later, the retaliation boomerang returned to Germany. The war, which was unleashed by Nazi Germany, was now gathering its bloody crop at German ports in the Baltic Sea.

Soviet submariners sank a number of German transports, while the number of victims, as in the case of Armenia, was enormous. The most famous attack was Alexander Marinesko, the commander of the C-13 submarine, which on January 30 1945 sank the Nazi 10-deck passenger liner "Wilhelm Gustloff", which served as a floating barrack for the Kriegsmarine school of submariners during the war for four years. Together with transport, thousands of people died from 5 to 9. February 9 Marinesko sunk another major liner "General Steuben", converted during the war into a hospital ship. Along with the ship, about 3600 people were killed, while Marinesko himself believed during the attack that the German light cruiser Emden torpedoed, he learned that it was not so only after returning from a cruise. 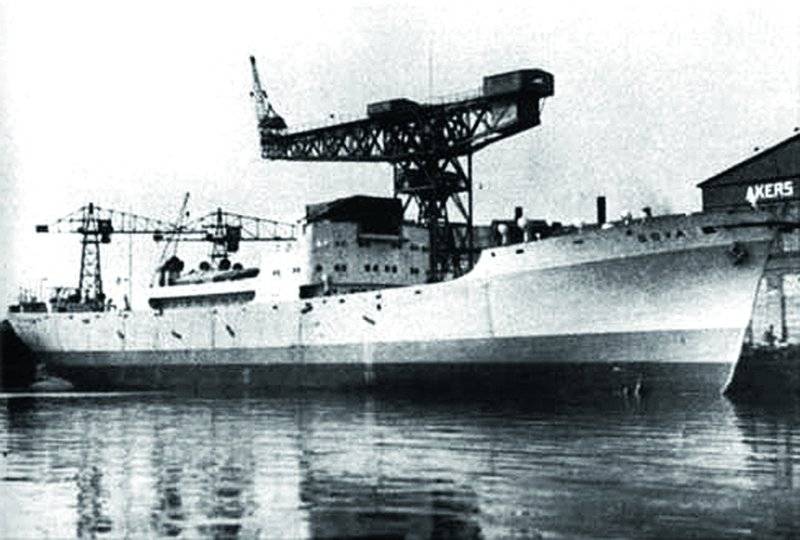 Dry cargo ship "Goya" at the shipyard in Oslo
It is precisely the Marinesko attack on "Wilhelm Gustloff" that is considered the most famous, however, in terms of the number of casualties, another attack by the Soviet submariners could dispute it. So, on the night of 16 on April 1945, the Soviet submarine L-3 sank the German Goya ship in the Baltic Sea. About 7 thousands of people died on board this vessel, which also makes this catastrophe one of the largest maritime disasters in the world. stories. In connection with the chaos that reigned in Germany and the onset of the Soviet troops on Berlin, this catastrophe went almost unnoticed, without causing any resonance. At the same time, as in the case of the Soviet ship “Armenia” and the German liner “Wilhelm Gustloff”, sunk in January 1945, the exact number of victims of these disasters cannot be established.

“Goya” was a fairly large dry cargo ship, length - 146 meters, width - 17,4 meters, displacement - 7200 tons, it could reach a maximum speed of 18 nodes (up to 33 km / h). The ship was built in Norway in Oslo at the Akers shipyard just a few days before the invasion. The ship was launched on 4 on April 1940 of the year, and on April 9 German troops invaded Norway. After the occupation of the country, the Germans requisitioned a new cargo ship. During the war years, it was used by them as a conditional target for training German submarine crews for quite a long time, until in 1944 it was converted into military vehicles, the ship was armed with several anti-aircraft guns.

In 1945, the ship took part in a major naval operation, "Hannibal", which was organized by the Nazi command. It was an evacuation operation from the territory of East Prussia of the German population and troops, due to the advance of the Red Army, which lasted from January 13 to April 25 1945. The operation was initiated by Nazi German Navy Commander Grand Admiral Karl Dönitz and started on January 21, 1945. It is estimated that within the framework of this operation over four months over two million people were evacuated to the western regions of Germany by the Baltic Sea. By the number of the transported population and troops, the operation “Hannibal” is considered to be the world's largest evacuation by sea.

By the middle of April, 1945, the Goya transport had already managed to take part in four campaigns, having evacuated 19 785 people from East Prussia. On average, the ship carried thousands of people on 5, but on its fifth voyage he took aboard many more people. The ship anchored in Danzig Bay at Gotenhafen (today Gdynia) in April 1945, it is believed that more than 7 thousands of people who had escaped from East Prussia could have boarded the former bulk carrier. In the current situation, no one carried out an exact count of people on board. German units barely held their positions, the whole territory of East Prussia was about to be taken by Soviet troops. It was rumored that the Goya would be the last major ship involved in the evacuation, so more people wanted to board it, which only increased the panic effect during loading.

Goya vehicles in camouflage coloring
In addition to the civilian population and wounded servicemen, there were 200 soldiers on board the ship from the 25th Tank Regiment of the 7th tank Wehrmacht divisions, in total more than 7 thousand people. At the same time, the Goya military transport was one of the vessels most unsuitable for evacuating people, its past affected, the ship was built as a cargo ship and was intended solely for transporting various cargoes by sea. Its safety and unsinkability requirements were much lower than that of passenger ships, which were also widely used for evacuation, in all, about 1000 different ships took part in the Hannibal operation.

There were so many people on board that they literally occupied every meter of free space, they sat in the corridors and on the stairs. More than a thousand people who did not find space in the interior of the transport, crowded on its upper deck in the cold rain. Each free bunk housed a 2-3 person. Even the captain of the ship was forced to give up his cabin to the refugees. The wounded were placed mainly in the holds, which were in no way adapted for emergency evacuation. At the same time, there was not enough medicine, drink, food and dressing materials on board. Rescue equipment is also not enough for everyone.

Four hours after leaving the port at the southern tip of the peninsula, Hel "Goya" was attacked by Soviet aviation. During the bombing, at least one bomb hit the ship, it pierced the deck and exploded in the bow, wounding several sailors at the rate of anti-aircraft guns. The damage was minimal and the ship did not receive serious damage. At the same time, the Goya transport was part of a convoy, which also included two small ships Kronenfels and Egir, as well as two minesweepers M-256 and M-328.

Already at dusk on April 16, 1945, this convoy was discovered by the captain of the Soviet submarine L-3 Frunzovets Vladimir Konovalov. The boat became part of the Baltic fleet even before the war - November 5, 1933. It was a Soviet diesel-electric mine-torpedo submarine, the third ship of the Leninets type II series. During the Great Patriotic War, the boat made 8 campaigns (7 combat), made 16 torpedo attacks and made up to 12 minefields. As a result of torpedo attacks, two ships were reliably destroyed; the results of two more attacks need to be clarified. At the same time, 9 ships were sunk and at least one more vessel was sunk at the mine barriers put up by the boat. 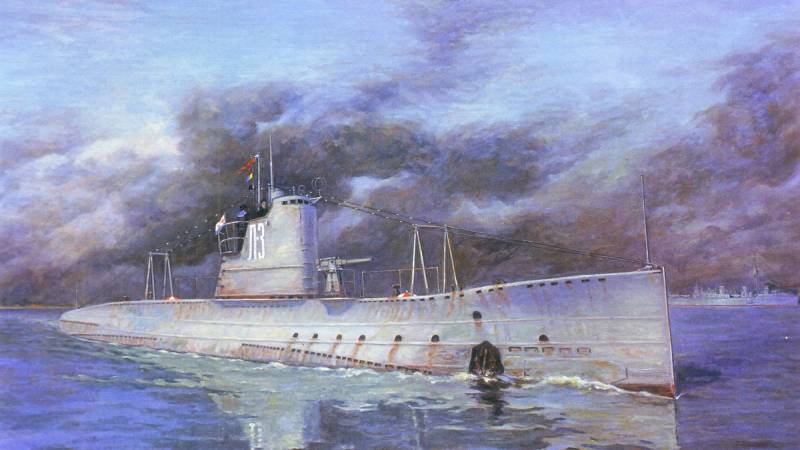 By 16 on April L-3 had already patrolled the exit from Danzig Bay for four days, expecting to meet German transports here. The boat discovered an enemy convoy consisting of three transports and two escort ships north of the Riksgaft lighthouse. The aim of the attack, Vladimir Konovalov, chose the largest enemy ship. To attack the ship, the submarine had to surface to the surface, since the submarine could not chase the convoy underwater position, the speed would then be insufficient. Although the convoy was also moving rather slowly, maintaining the speed around 9 knots, which corresponded to the speed of the slowest vessel - the Kronenfels motor ship. In this case, the convoy kept the blackout and was darkened.

The attack simplified the fact that in 22: 30 the ship “Kronenfels” got into a drift due to a breakdown in the engine room, all the ships of the convoy were forced to stop. The crew of the ship was feverishly working to correct the damage, at that time two minesweepers were circling alongside the faulty vessel. The convoy moved on only an hour later, he began moving in 23: 30. During this time, Vladimir Konovalov made all the necessary maneuvers and brought his boat L-3 to attack the most important goal as part of the convoy found by him.

He fired two or four torpedoes across the ship (information on this score varies). It is authentically known that two torpedoes got into the transport. The Germans recorded explosions in 23: 52. One torpedo hit the engine room "Goya", the second exploded in the nose. The explosions were of such strength that the masts of the ship collapsed on the deck, columns of fire and smoke rose into the sky. A few minutes later - by midnight - the ship sank completely, breaking up into two parts before. After the attack, escort ships pursued a Soviet submarine for some time, but Vladimir Konovalov managed to escape the pursuit.

The convoy ships were able to save only 185 people alive, of which 9 died after being rescued from injuries and hypothermia. The rest failed to escape, the ship sank too quickly, as it could not initially provide the level of safety and buoyancy that was characteristic of passenger and warships, and the damage was too serious. At the same time the water at this time of year was still very cold, especially at night. Remaining people on the water quickly froze and lost their strength. Most of them were dressed quite lightly, because on the ship, especially in the interior, there was a terrible stuffiness, the ship was crowded with people. About 7 thousands of people went to the bottom along with the vessel. Few weeks remained until the end of the war. 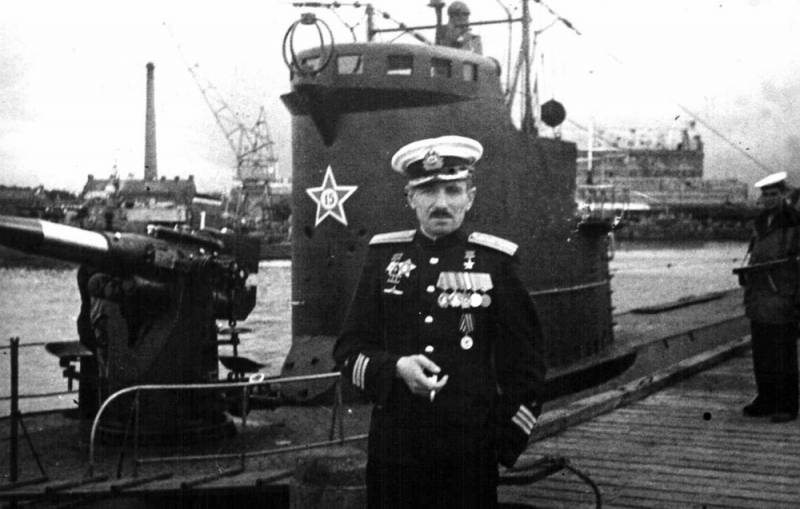 Captain 3-rank Konovalov near his boat. A snapshot of the summer of 1945.
By decree of the Presidium of the Supreme Soviet of the USSR from 8 July 1945, for the exemplary performance of command combat missions, personal courage and heroism shown in battles with the German fascist invaders, guard of the rank 3 rank Vladimir Konovalov was awarded the title of Hero of the Soviet Union and awarded Lenin and Gold Star Medals. In many ways, this award was also associated with the successful attack on the Goya transport at the very end of the war.

The submarine L-3 "Frunzenets" remained in service until the 1953 year, in the 1971 year, it was dismantled. At the same time, the cutting of the L-3 boat together with the 45-mm gun from it is currently located in Moscow, it is installed in Victory Park on Poklonnaya Hill and is included in the exposition of the Central Museum of the Great Patriotic War.